We tasted finished ‘straight’ Verdejo and lees-aged, then a number of wines vinified and aged in a variety of different vessels including concrete, foudre and French and Hungarian oak.

Do a Google search of Ramón Bilbao and its head winemaker Rodolfo Bastida and, apart from the many wine reviews of its wines from Rioja and Rueda, you get to see news stories that have ‘innovation’ ‘experimentation’ and ‘expansion’ in their headlines.

This is because since 1999 Ramón Bilbao has been growing with a vision and steadfastness that has seen it become the Rioja on-trade market leader with 8.5% market share in Spain – to mention just one accolade.

1999 was when the family-owned company was bought by the brand building conglomerate Diego Zamora, that also produces Licor 43, and this was the same year that Bastida joined the company with a brief to bring in fresh ideas.

Having an audience with Bastida is a rewarding two-way experience involving many cask samples, new and old vintages, and a plethora of neat ideas about investment in vineyards, wine-making techniques and facilities. This all performed with a corporate slickness that wouldn’t look out of place in a PLC boardroom and by a man who looks more like a modern day football manager than a man who spends every evening trying to get Tempranillo stains off his hands.

Speaking at the Tate Modern this summer to a full house, Bastida outlined how for the past 19 years he has been honing the style of Ramón Bilbao’s wine portfolio to sit both without and within the classic Rioja category classification – a region that in itself is already in the midst of fundamental changes – and to take the company into pastures new.

Last December The Buyer sat with Bastida to taste cask samples of Rioja that had been grown at new higher altitude vineyards to obtain greater freshness and complexity (click here).

In July Bastida came back armed with the finished wines plus samples from its new winery in Finca Las Amedias that, which since the 2016 vintage, has taken Ramón Bilbao into Rueda for the first time in its history with an unique 60 hectare plot.

In both instances – higher altitude Rioja and the new Rueda whites – the direction the wines take are determined by extensive scientific research on the terroir and how the most relevant variety can best express this, with the over-riding Ramón Bilbao philosophy being one of producing wines that are fresh and elegant in style and with oak used only to allow ageing and not to cloud the fruit-expression of the wines.

It was no surprise then to see that the sample wines we were to taste from Finca Las Amedias were from differing ageing vessels, including three types of oak, and to see Bastida take a show of hands to see who preferred their concrete-vinified Verdejo aged for eight months in either foudre or concrete, or barriques made from either French or Hungarian oak or a mix of the two.

Bastida is not a winemaker who bases his winemaking style upon a hunch or leaves it to chance. He, and the team he has assembled at Finca Las Amedias under Enologist Sara Bañuelos, are fastidious in their research – letting science dictate what varieties they use, where in the vineyard, to what density and so on.

Finca Las Amedias used to be a cereal farm on which vines had never grown so, before the vines were planted, Ramōn Bilbao conducted a series of painstaking research projects to explore the land, get to know it and understand it.

They started to do this by digging 77 trial pits across the 60 hectares, identifying the soil layers and for each one defining the most important features: texture, chalk content, water holding capacity, soil depth and level of organic matter present. They then analysed the distribution of carbonates in the soil and classified them. Then it was analysing the soil’s water accumulation capacity – important given that Rueda as a region has poor and stony soils, an extreme continental climate and is on a 700-800m plateau. Roots depth was examined which then determined which varieties would need what level of irrigation management.

The experiments concluded that, although the soils vary enormously across the estate, broadly speaking they fall into two categories: soils rich in carbonates and non-chalky soils and, based on these findings, it was decided to split the plot into two varieties – indigenous grape Verdejo on the gravel and, slightly surprisingly, Sauvignon Blanc on sandy-clay soil.

“This is a new grape for this area,” Bastida says, “and with Sauvignon Blanc from Rueda we can do some interesting things.”

From a logistical point of view the two varieties dovetail conveniently harvest-wise, with Sauvignon Blanc being picked at the start of September and Verdejo around mid-September.

This being Spain and Finca Las Amedias being owned by Ramón Bilbao, the bodega looks like something Blofeld would use to plot world domination from. Inside the sleek design are all the ‘boys toys’ for the modern winemaker, all the latest technology and then some – right down to the 4,100 litre tulip-shaped concrete tanks.

So what were the Finca Las Amedias wines tasting like? 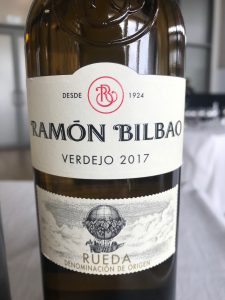 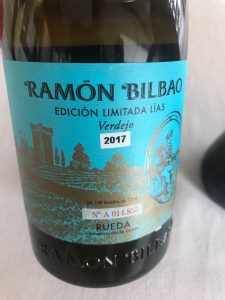 The other finished Verdejo was the Edición Limitada Lias Verdejo 2017 (RRP £14.95) which was fermented in concrete, on its lees for eight months, aged in a mixture of French and Hungarian oak with assemblage in foudre. This is unusual for the area with the lees-ageing adding a lick of cream and toast on the finish in addition to the customary citrus flavours. This was my favourite of all the Verdejo we tried and comes highly recommended, particularly as a by-the-glass food match with ceviche and soft, green herbs.

The ‘concrete Verdejo’ was my clear winner – the mineral aspect of the wine was accentuated, the flavours were very crisp, leaner with the lemon slightly more sour. Next was the foudre wine which had attractive floral and honeyed notes, the lemon more confit. The Hungarian oaked Verdejo was perfumed and elegant, had less sharp citrus (more lemon rind) and an attractive textured finish. The French-oaked was my least favourite with the oak slightly suffocating the fruit.

Bastida confessed that he particularly likes the Hungarian oaked Verdejo “particularly when you know where Central European oak comes from these days – that it is not coming from woods near Chernobyl, for example”.

But which wines end up on the open market who knows? The man and his team are forever experimenting and tweaking. 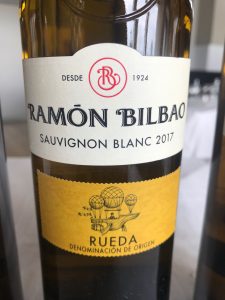 One word on the Sauvignon Blanc 2017 (RRP £10.95) this was super dry, very precise, lean with very fine tannin, and a kafir lime rind edge. It’s closer to Bordeaux than New Zealand and impressive given this vintage was from two year-old vines. It will offer sommeliers an interesting alternative.

The wines of Ramón Bilbao are sold and distributed in the UK by Enotria&Coe.