How Russian snub is upping the quality of Moldovan wine

Moldova used to be the main source of wine for Russia with the country housing famously large cellars, some of which you need a car to get around in. But in a dramatic U-turn and a snub to Russia, Moldovan wine is now primarily aimed at the EU wine markets with the quality improving in leaps and bounds. Wine expert Justin Keay explores this complex history, discovers new Moldovan wine from Purcari, Crama Ceptura, Divin Bardar and Angel’s estate in Thrace, and looks at an unique way that the country is siding with Ukraine in the current war.

Moldova used to be the main source of wine for Russia with the country housing famously large cellars, some of which you need a car to get around in. But in a dramatic U-turn and a snub to Russia, Moldovan wine is now primarily aimed at the EU wine markets with the quality improving in leaps and bounds. Wine expert Justin Keay explores this complex history, discovers new Moldovan wine from Purcari, Crama Ceptura, Divin Bardar and Angel’s estate in Thrace, and looks at an unique way that the country is siding with Ukraine in the current war.

“One has to hope production of this Moldovan wine is stepped up because this is that rare thing – a concept wine that appeals to the heart as well as the palate,” writes Keay.

Ok, so here’s your starter for six.

Which country was first invaded by post Soviet Russia? Was it Georgia in 2008 when Russian troops occupied Abkhazia and South Ossetia, two autonomous enclaves with Russian minorities? Or Ukraine six year later when Little Green Men took over Crimea and parts of the Donbass?

No, it was Moldova in 1992 when Russian sent ‘peacekeeping troops’ to support separatists in the tiny republic’s industrial region of TransNistria, and hey – they’re still there 30 years later.

Like just about every country unfortunate enough to border Russia, Moldova’s evolution since independence 31 years ago has been defined to a disconcerting degree by Moscow. As this poor country of three million people has undergone various political oscillations – with governments variously wanting closer relations with Russia, neutrality or, as today, much closer relations with the west – Moscow continues to attempt to bring it to heel.

Exhibit one – Moldova’s wine industry, responsible for employing, in one form or another, some 20% of the working population in a country so associated with wine that enthusiasts say its shape even resembles a bunch of grapes (which it does, sort of). Moldova has 100,000 hectares of vines and produces more wine per capita than any other country.

Moscow sought to weaponise export dependence on the Russian market through draconian bans – in Moldova’s case three times, in 2006, 2009 and 2013 – having found “dangerous impurities” in the wine. The result has been a drop in Russia’s share of Moldova’s wine exports from 80% around 2000 to 10% today.

But, as with Georgia’s wine industry which suffered similar embargos, having to find new, more picky consumers has dramatically pushed up quality, as I discovered at a tasting at 67 Pall Mall. This event – introduced by Caroline Gilby MW – billed as a ‘Discover Moldovan Wine’ tasting was actually built around the portfolio of the Purcari Wineries Group, whose other labels include the more mass market Bostovan, local spirits company Divin Bardar, Romanian winery Crama Ceptura and the just-acquired Bulgarian producer Angel’s Estate, in Thrace.

Purcari can date its origins back to 1827 and in the late nineteenth century became internationally renowned for Negru de Purcari, a dark red blend made from international varieties and Rara Neagra the country’s best known indigenous variety: the wine reputedly found favour with Queen Victoria, amongst others.

Since 2003 Purcari has received substantial investment under owner Victor Bostan and is listed on the Balkans’ large stock exchange in Bucharest, under the easy-to-remember-ticker WINE. Bostan has overseen the replacing of clapped out Soviet era equipment with state-of-the-art machinery and innovations including amphora used to make the limited edition, high end range, Academia Purcari, ambitious but very limited production wines (typically around 6000 bottles) in characteristic squat-shaped bottles (wines include a Rara Neagra, a Feteasca Neagra, a Saperavi and an orange Viorica).

To further bolster quality it has taken on two consultants, Frenchman Jerome Baret for its sparkling wines, and Italian Federico Giotto for an ever-widening and innovative range of still wines.

So how were the Moldovan wines?

Gilby showed 13 wines during her Masterclass, all of which were frankly pretty good including a serviceable Pinot Grigio aimed at the easy drinking market. All demonstrated that Purcari is equally adept working with international varieties like Chardonnay, Cabernet Sauvignon and Merlot as it is with native varieties and ‘local’ varieties such as Romania’s Feteasca Neagra and Georgia’s Saparavi. 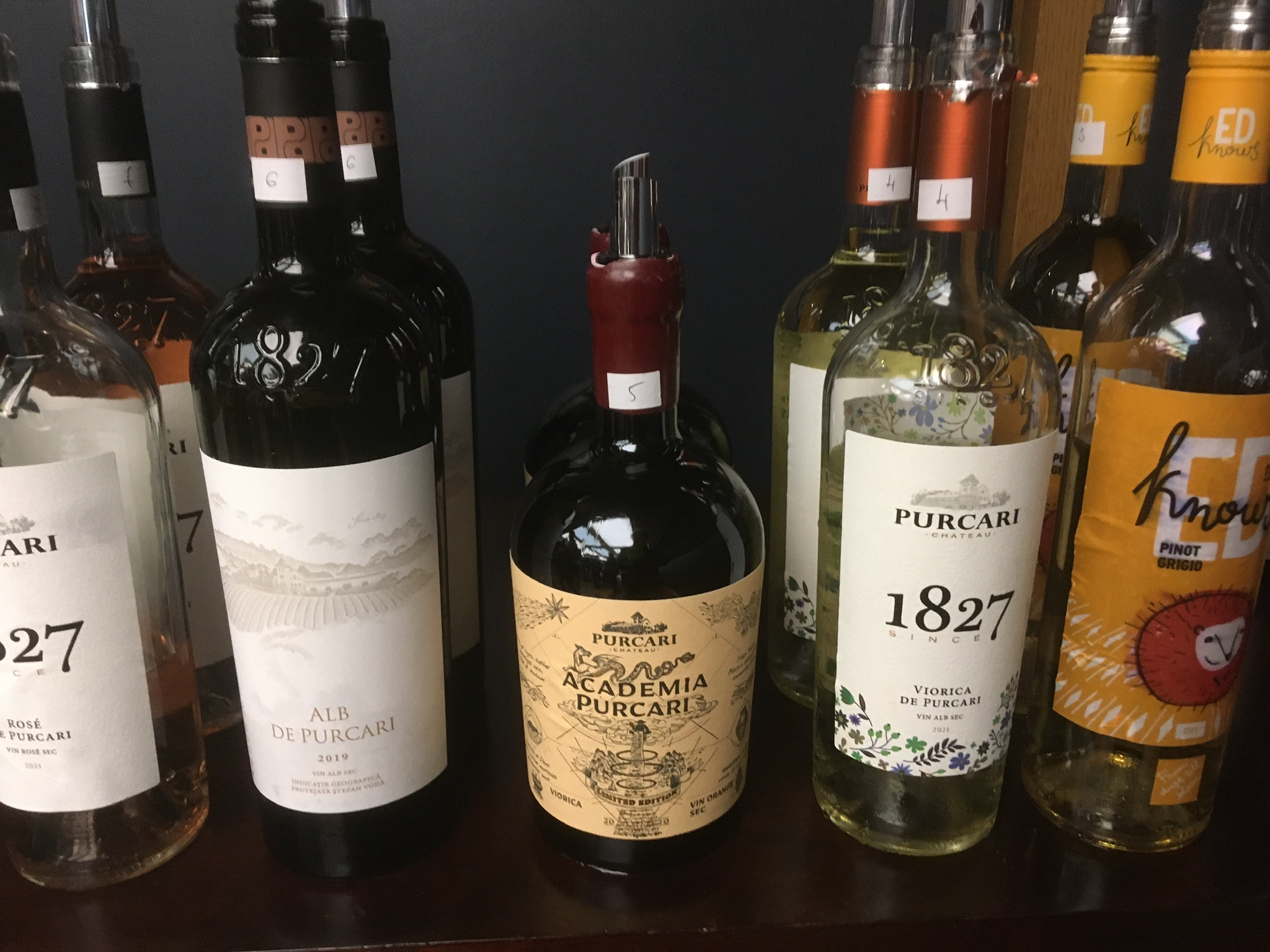 Standouts for me included two sparklers, a good reflection of the amounts invested in Purcari’s sparkling range since 2017: the very nice, soft Cuvee de Purcari Feteasca Purcari Brut, which had a long finish with 9 g/l of residual sugar (but really not showing it) and nine months lees contact giving real depth and flavour; and the Grande Cuvee, a very elegant and well made blend of Chardonnay (60%), Pinot Blanc (30%) and Pinot Noir (10%), with 24 months of lees contact giving this great finesse – just 3 g/l residual sugar and very refreshing.

Amongst the whites the Viorica 2021, made from an indigenous 1969 crossing between Aleatico and Seibel, was a delicious Muscatty type of wine, a great aperitif and very moreish, whilst a 2020 orange amphora version, in the Academia Purcari range, was also universally popular – good skin contact and acidity but very clean and well made. I really loved Alb de Purcari, a wine now in its tenth vintage and launched as a white counterpart to the iconic Negru de Purcari. The Alb is a blend of Chardonnay (50%), Pinot Grigio (35%) and Pinot Blanc (15%), very elegant and aromatic but also complex with layers of flavour emerging over the course of half an hour or so; there was a hint of match strike at the end of what is a long finish. 70% oak and 30% stainless steel fermentation.

Amongst the reds, the 100% Rare Neagra 2020 was a great expression of the variety, which dates back to the 14thcentury in this region; lots of cassis and dark cherry, with supple tannins and some chocolate on the finish. The Academia Purcari RN 2019 was a very different beast; extended skin contact made this a complex, full-bodied and layered wine but somehow losing some of the Rare Neagra characteristics. The iconic Negru de Purcari 2019 was delicious: a blend of Cabernet Sauvignon (55%), Saperavi (40%) and Rare Neagra (5%) combine to make a complex and long wine, with lots of fruit intensity on the palate, but fine tannins and moderate acidity. Made from the best parcels in the Purcari vineyards, of course, this wine can stand tall with the best from much better known regions and is a great updating of an old classic.

So what does the future hold for Moldovan wine?

Although there are some 200 wineries, many are tiny and the overall volume is falling reflecting the drop in area under vine, a process underway for many years. Moldova’s move away from the Russian market is a stunning about turn for a country which – throughout the 19th century as Bessarabia and then as the Moldovan SSR under the Soviet Union – was Russia’s main source of wine. Yet this seems set to continue, particularly since Moldova’s 2014 Association Agreement with the EU, and Chisinau now also a formal candidate for membership. EU countries are now Moldova’s main market.

Moldova’s government has also been relatively outspoken against Moscow’s invasion given its proximity to events and its continued dependence on Russian energy. The Purcari Estate, for its part, is literally on the border with Ukraine and not so far from Odesa, one of Putin’s initial targets. Yet it has been doing its own bit to support the war. 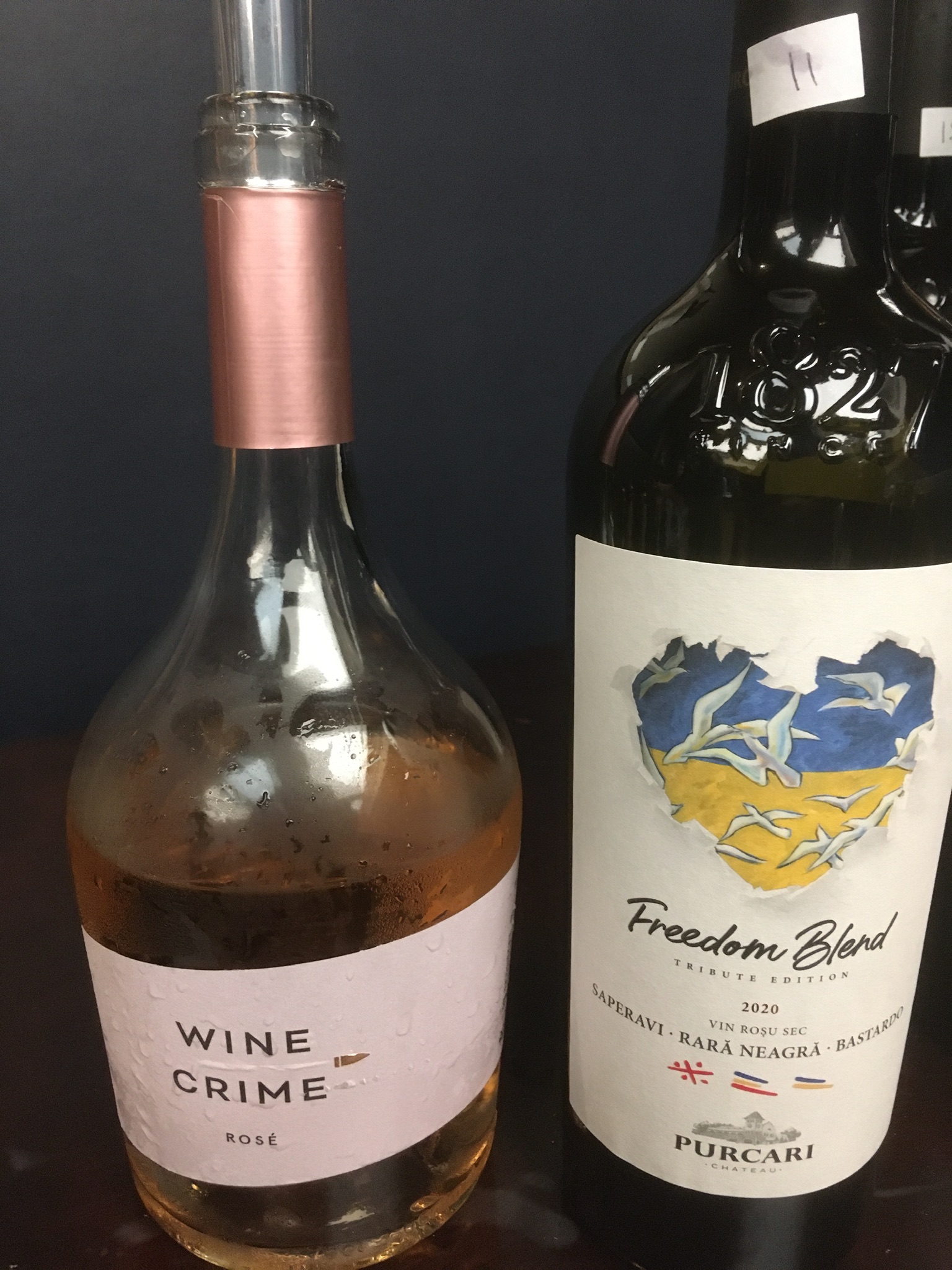 In 2012, to mark 20 years of independence from the USSR for Moldova, Georgia and Ukraine it came up with a new wine, Freedom Blend,  “that embodies the thirst for freedom” of these countries, with the first vintage appearing two years later. A red blend of Saparavi (Georgia), Rare Neagra (Moldova) and Bastardo (Ukraine) all sourced from within Moldova, the result is a full-on wine, with hints of tobacco leaves, spice and cassis. Proceeds from the current 2020 Tribute vintage all go to support Ukraine, according to Remus Turcan, Purcari’s international development manager.

“It’s our way of saying to the people of Ukraine that you are not alone, we are behind you and together with you in your struggle.”

This wine – which in the UK costs around £20 – would be mega popular amongst those wanting to show their support for Ukraine but the problem is small volume – around 50,000 bottles are currently produced. One has to hope this is stepped up because this is that rare thing – a concept wine that appeals to the heart as well as the palate, and which can sit proudly amongst an impressive portfolio.

Caroline Gilby on the Ukraine border with Vinaria Purcari

How Château Purcari is bringing Moldovan wine to the UK