“You will notice these wines are quite dark. We want to make sure it looks yummy, that was very important to Merry, so we focus a lot on phenolics, also during fermentation,” says von der Mehden.

It was in February 2019 that Champagne Louis Roederer bought the Merry Edwards winery and vineyards in California’s Russian River Valley. Represented by MMD, they had arranged a Zoom tasting of the new winemaker’s first full solo vintage to present one unusual Sauvignon Blanc and two distinct Pinot Noirs – all expressive of the Californian sunshine. But let us reel back a little first, to set the scene.

It’s hard to imagine today that in the mid-20thcentury, Sonoma’s Russian River Valley was considered too cool for viticulture. The area was known for apples and the fact that Merry Edwards winery is on Gravestein Highway says it all – it was named after an ancient apple cultivar that was once the main apple crop in Sonoma County. Even before the Russian River AVA was outlined in 1983 – defined by fog incursion and cool temperature thanks to the cool Pacific – the area became a crucible for new Pinot Noir talent: Merry, short for Meredith Edwards was one of its bright young stars.

Edwards was a rare female graduate of UC Davis in 1973, was hired as a winemaker by Mount Eden Vineyards in the Santa Cruz Mountains but upped sticks to Sonoma in 1977 where she promptly became winemaker at the Matanzas Creek Winery in Santa Rosa. It was not until the late 1990s that she managed to establish her own label. Building her own winery had to wait until 2006 – so everything Edwards did, she did the hard way.

Now in her seventies, it was time for Edwards to hang up the secateurs and leave the punch downs to someone else, so Edwards sold her winery to Champagne Louis Roederer. From 2015 onwards, current winemaker Heidi von der Mehden worked alongside Edwards and 2018 was her first vintage in full charge of everything.

“We have 60% Pinot Noir and 40% Sauvignon Blanc,” Heidi von der Mehden explained. “We make about eight Pinot Noirs, specifically single-vineyard Pinot Noirs throughout the Russian River Valley. All the wines are appellated Russian River apart from one in the Sonoma Coast.”

They own 13ha of vineyards but also buy in fruit. Later in the conversation it is revealed that they also make some sparkling wines.

The tasting started with the Sauvignon Blanc and von der Mehden explained what made it different. Initially there had just been two acres of Sauvignon Blanc, “but in 2015 we were finally able to plant more,” she says excitedly, noting that they planted in both their estate vineyards: Mayfield and the much cooler Meredith Estate.

“It’s our flagship vineyard, it really holds that acidity that makes our Sauvignon Blanc so unique and bright. Making Sauvignon Blanc in the Russian River is wonderful because we have these cold mornings, and these huge diurnal swings of 40°F shifts.”

Acidity is thus not a problem, on the contrary: “With our Sauvignon Blanc we are waiting for the acid to drop in the vineyard, for our style,” von der Mehden says. “Other producers might pick at 22 brix [equiv. to 12.9% potential ABV] but if we did that our pH would be too low. When you taste you realise that it’s not your typical porch Sauvignon Blanc, it’s a serious wine that Merry developed. She didn’t like Sauvignon Blanc and tried to make a wine she liked. That meant harvesting riper to get these tropical flavours and fermenting fully in oak.”

But it’s not only harvest point that makes the difference: “We’ve built upon our style by changing how we farm, so we have very open trellises and canopies. Others want dappled light on their grapes, I go out there and we take almost all the leaves off on the morning side of the vineyards and help the sun to penetrate. This gets the pyrazine [the green, leafy notes so typical for Sauvignon Blanc] flavours out of the wine.” The wines ferment in wood and about a fifth of the oak is new, with the lees stirred to enhance the creaminess. 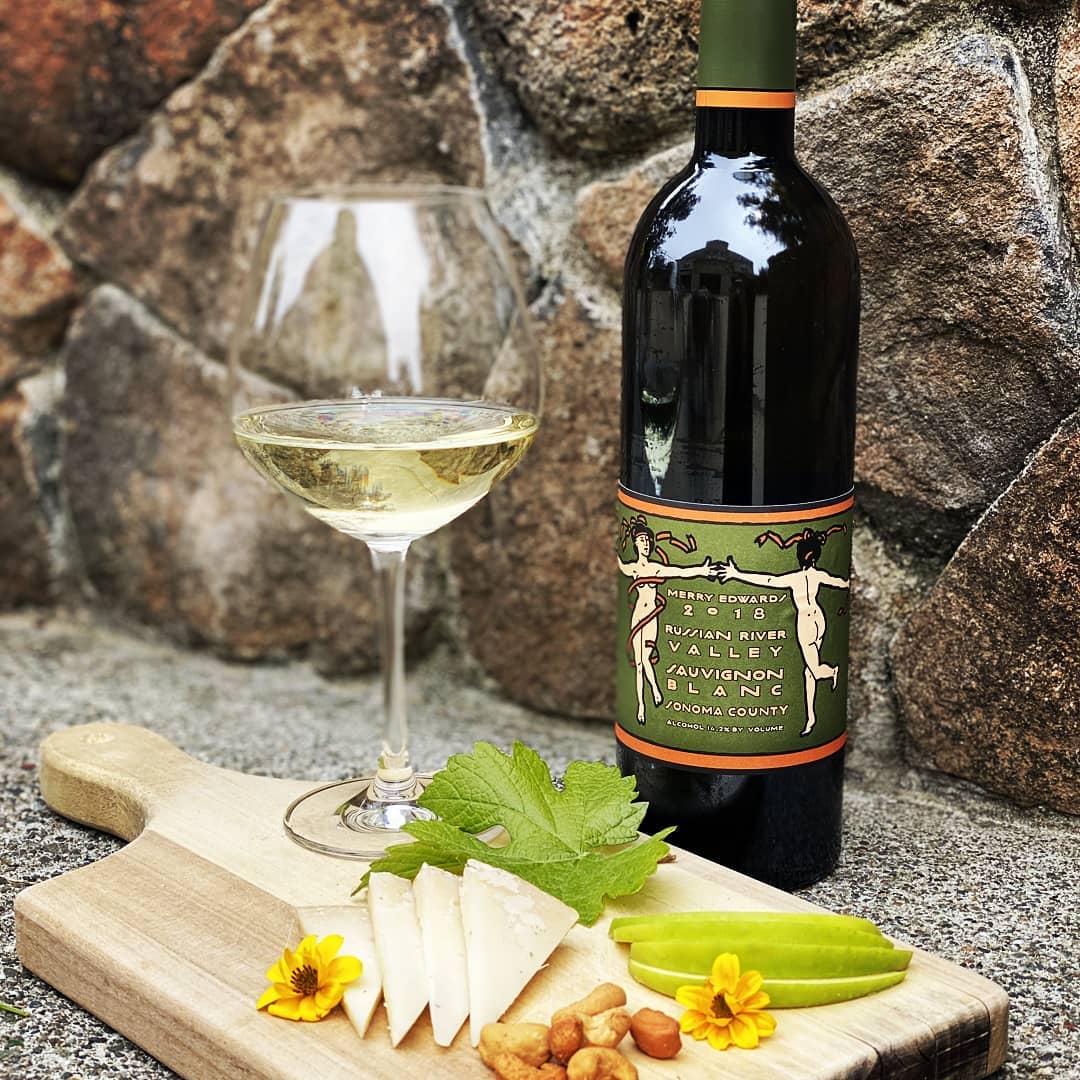 The nose initially has a little smoke and the merest whiff of grass, but the palate is rounded, warm, smooth, creamy. The oak is a textural element here, and the less stirring makes this super creamy. It is bold, ripe, concentrated but ultra-mellow, I would leave this well alone and uncork it in five years’ time.

We then move on to the Pinot Noirs, starting with the wine from the Sonoma Coast. “This is our most red-fruit-driven Pinot Noir,” von der Mehden says. “When we source the grapes and choose the barrels to go into this wine, we choose red fruit, earthiness, high acidity. It always has a bit of mushroom and forest floor. Darker fruited wines with dark cherry and cocoa-chocolate flavours go into the Russian River wines.”

Since the Russian River and Sonoma Coast AVAs overlap, choosing barrels for the blend not only by AVA but also by wine character and clone makes sense – and it works in order to set accents seeing that at least 85% of the wines originate in that particular AVA.

“The Martini Clone has larger berries, it typically has softer tannins and red-fruited cherry, this usually goes into the Sonoma coast,” von der Mehden says, noting that when she started working with Edwards she learned “the things she does to get the style she wants. I thought when I came here that people were a bit adverse to pulling leaves, but Merry told me that if you pull leaves right after set, the grapes develop something like a basic tan that protects them,” von der Mehden explains. “You will notice these wines are quite dark. We want to make sure it looks yummy, that was very important to Merry, so we focus a lot on phenolics, also during fermentation.”

While clones play a big stylistic role, one of the clones is special: Merry Edwards worked at Mount Eden Vineyard. Since it was planted in the 1940s with cuttings from the nearby La Cresta vineyard that in turn was planted 1895/96 with cuttings rumoured to have come straight from Burgundy, this vineyard is now part of Californian Pinot Noir lore. Many people have taken cuttings there and they are known as Mount Eden Selections. It was young Merry Edwards, however, who took a cutting from Mount Eden to the UC Davis Foundation Plant Services, something like a clone bank, and had it certified as a clone after making sure it was virus free and indeed distinct. It now is the UCD 37 clone.

Of course it still features in the Merry Edwards wines, capable of real quality: “It’s proven to be virus free, a very strong clone,” von der Mehden says. “We have it planted at our northernmost vineyard and our southernmost vineyard and we make vineyard designates from both! It has smaller clusters, chicken and hens [=millerandage], so you get a very good skin to pulp ratio, lots of phenolic material, very dark cherry flavors, and big tannins.”

The two wines we taste are the AVA wines – wonderfully distinct and true to their AVAs. They only whet my appetite for the single-vineyard wines. I am curious where von der Mehden will take the Edwards heritage.

Ripeness is evident right away with rich notions of black cherry juiciness. On the palate the black cherry notions are equally ripe, even warm, but they come with a beautifully aromatic smattering of cinnamon. This is bold and cherry-ish with both black and red fruit. The tannins are already smoothing out, turning to velvet rather than silk. The fruit is ripe, luscious, black cherry central. It is resonant and smooth, the full velvet version.

Even at pouring there is a lick of oaky smoke on the nose. The nose then opens up into vivid red, ripe cherry, with overtones of raspberry jelly. The palate sets a lovely counterpoint of freshness to this exuberant, vivid, ripe fruit. This is lush and very Californian in style. The finish reveals a gentle smokiness, a touch of earth. With more air, there is a real sense of pepper, and of rain-wet rose hedge spiciness. This wine takes time to unfold but blossoms beautifully. Bottle age will only make it better.