Marqués de Murrieta turns on the style for its 170th anniversary

As the oldest family-owned estate in Rioja, Marqués de Murrieta, has an air of Spanish royalty. At the bodega’s 170th anniversary, however, chief Vicente Dalmau explains to Roger Jones that there’s no intention to sit on its laurels but rather for his team to push the envelope further both in terms of wine styles and how Rioja is presented to the outside world. At a spellbinding dinner atop London’s Shangri La, Jones reports back on an event where some of the rarest bottles from Rioja were opened and consumed.

As the oldest family-owned estate in Rioja, Marqués de Murrieta, has an air of Spanish royalty. At the bodega’s 170th anniversary, however, chief Vicente Dalmau explains to Roger Jones that there’s no intention to sit on its laurels but rather for his team to push the envelope further both in terms of wine styles and how Rioja is presented to the outside world. At a spellbinding dinner atop London’s Shangri La, Jones reports back on an event where some of the rarest bottles from Rioja were opened and consumed.

Vicente Dalmau is a brilliant speaker, his vision is no holds barred, as he continues to excel in building a world class brand, that has a wide global following. His sharp designer clothes and immaculate ‘presidential’ appearance is testament to everything he does in seeking perfection for his wines, but rest assured he is one of the nicest and friendly gentlemen that I have met.

Marqués de Murrieta is the oldest family-owned estate in Rioja, it was founded in 1852 by Luciano Francisco Ramón de Murrieta, one of the founding fathers of modern Rioja winemaking, who used French techniques to develop greater complexity and longevity from Tempranillo, sourced all grapes from a single estate and established the Ygay estate near Logroño in Rioja Alta. Luciano was made Marqués de Murrieta by Queen Isabel II, and after his death in 1911, the bodega was taken over by the Olivares family and then in 1983 by D. Vicente Cebrián-Sagarriga, Count of Creixell. The new owner sadly died in 1996 leaving his 24 year old son, Vicente Dalmau Cebrián-Sagarriga to run the estate.

From that day Vicente Dalmau was determined to start a wine revolution not only in Rioja but also in Rias Baixas – the estate now covers 300 hectares and the philosophy is one of quality, with low yields in the vineyard and limited production in the winery which are the key to the quality and style of Marqués de Murrieta wines. With his sister Cristina Dalmau has completely updated the historic Marqués de Murrieta winery, including the 3,000-square-metre granite buildings and also revived the Galician winery Pazo de Barrantes, showing the way forward for Albariño wine. They built up a new team, looked at getting the balance of fruit, freshness, purity and elegance into their wine, this was not to be an overnight change but things have been transformed slowly over the last 26 years.

Key to the changes has been winemaker María Vargas who joined the estate in 1995 as assistant winemaker and took the top position in 2000.

Dalmau stated that it was “important to showcase the new style”, with the 2018 vintage being an important step as he referred to it as “our new era”, and the wines as our “new babies”.

Dalmau is focused and determined and is also leading the way forward to educate the world about Rioja, he sees a natural way forward in making a similar Bordeaux class system, highlighting each bodegas’s status, he clearly thinks that the current system where “Gran Reserva” has no quality status is misleading. He said that having “Grand Reserva” on a label is misleading, and merely quantifies the age not the quality and therefore is not helpful to the consumer.

The winery in Galicia was built in 1991 in the heart of the DO Rias Baixas, with 12 hectares of vineyards, planted 100% with Albariño grapes, having an unique terroir and microclimate. This estate was originally owned by the Olivares family who owned Murrieta prior to Vicente’s father.

This is an Albariño with style, complexity and attitude which Vicente sees as the future for this wine. Vicente said that the Albariño grape “deserves” this new complexity, giving it more potential to age and therefore become a greater grape. The freshness, with a lemon and lime uplift, is there on the front palate, but underneath there are layers of  flavours with white flowers, beautifully clean fruit, hints of texture and creaminess but with a fresh acidity. Quite outstanding.

The next nine wines were all served with dinner 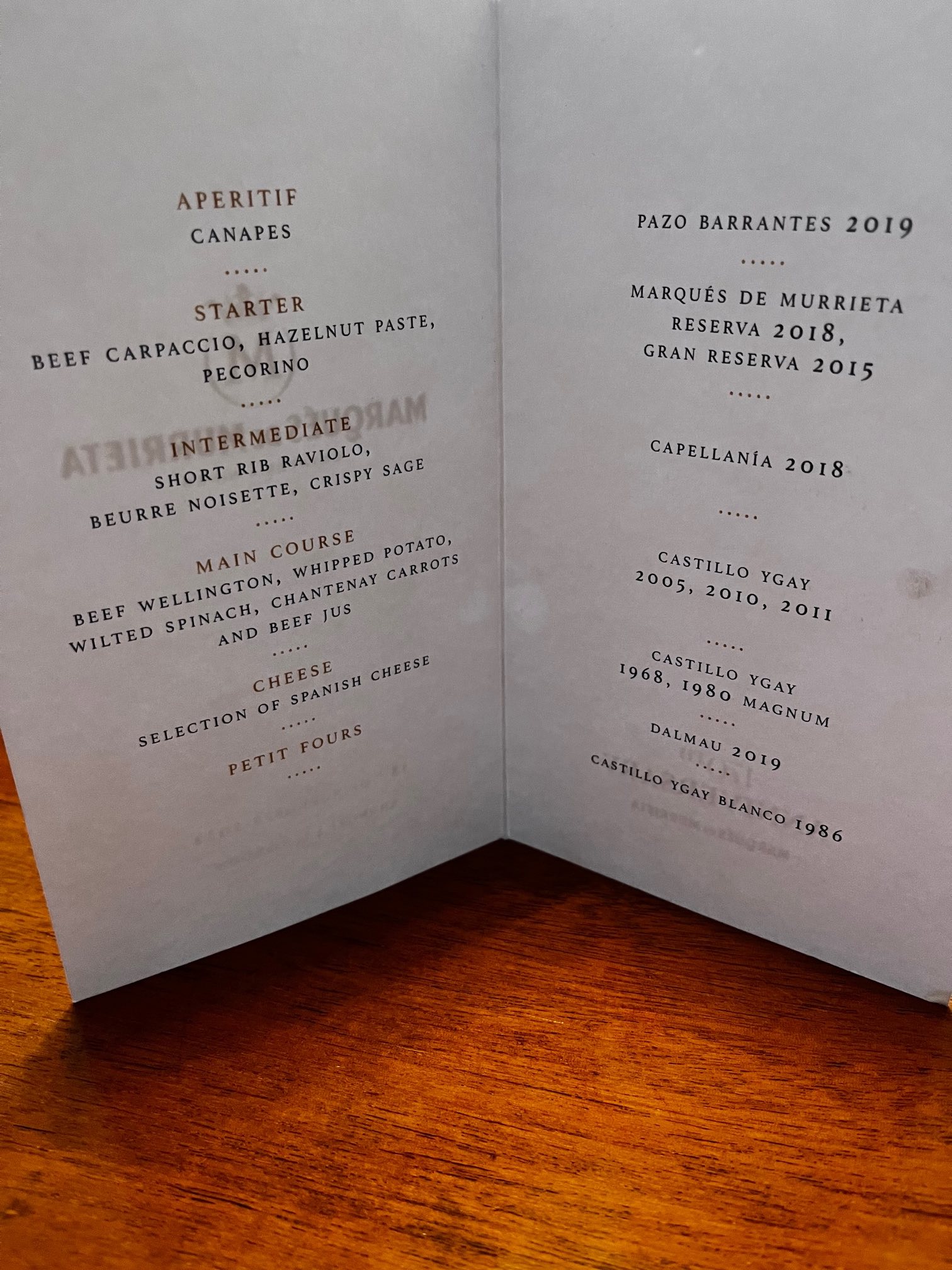 Aged for 21 months in 225-litre American oak barrels, of which six months is in new oak, then a few months in 15,000-litre concrete vats prior to bottling.

Aged for 27 months in 225-litre American oak barrels, of which six months is in new oak, then a few months in 15,000- litre concrete vats prior to bottling.

I loved the silky texture of this wine – dark, bright acidity, rich and ripe, classic Rioja flavours of blackberries, blueberries, violets, roast lamb’s blood, meaty but fresh, bright vanilla spice, polished cedar, hints of bonfire, fresh and clean on the finish. This wine retails from around £48 which offers exceptional good value for an 8-year-old wine of great quality that can be drunk now but will also evolve beautifully over time and age gracefully.

Vicente calls this its ‘single estate’, he has been evolving this wine, seeking a ‘new era’ wanting more ‘balance, more fruit and the potential to allow it to age’, he certainly has achieved this with this impressively textured, focused and layered wine, sourced from vines dating back to 1945 on the 6 hectare Capellanía plot. A myriad of flavours dance on the palate – ripe, crisp, peeled Pear William, white cob nuts, almonds, hints of yellow nectarines – the wine having a full flavour but with a sublime freshness; will age beautifully.

This white was a perfect match to the Short Rib Ravioli, brightened up by the Beurre Noisette and Crispy Sage, highlighting how well white wine can go with rich meat dishes.

Castillo Ygay is made from grapes sourced from La Plana, a 30 hectare single vineyard planted in 1950, at the highest elevation of the Ygay estate. The Tempranillo is aged for 30 months in 225-litre American oak barrels, and part of the Mazuelo in 225-litre French oak barrels. The wine is then further in concrete tanks and bottle before release.

The Mazuelo is rather special to this wine, giving it acidity and freshness; the wine has notes of cocoa, spices, cherries, violets and game; textured and velvety, the flavours are luscious and linger on the palate.

Truffles, dried ceps, cedar, mocha, juicy raspberry freshness, milk chocolate, spiced; as the wine opens out in the glass there is a fresh, delicate and clean focus to it. This Ygay is starting to show immense class, I loved the balance between the savoury darkness and fresh uplift from the red berries and cherries.

This to me was even better than the 2010, dark with more concentrated fruits but with a cleaner freshness to it, giving a perfect balance; the was in perfect harmony with nothing ‘shouting out’, just perfectly poised. Wow what a wine! One that you need to hide in the cellar for a decade or two.

The magnum that I tried was beautifully clean, fresh and focused, with an amazing hedonistic perfume to the nose; lamb blood juices, blue and black fruit but pure, there were some savoury flavours – meat and cedar – on the back palate, but overall the wine was fresh and focused with refined vanilla and spiced cocoa. 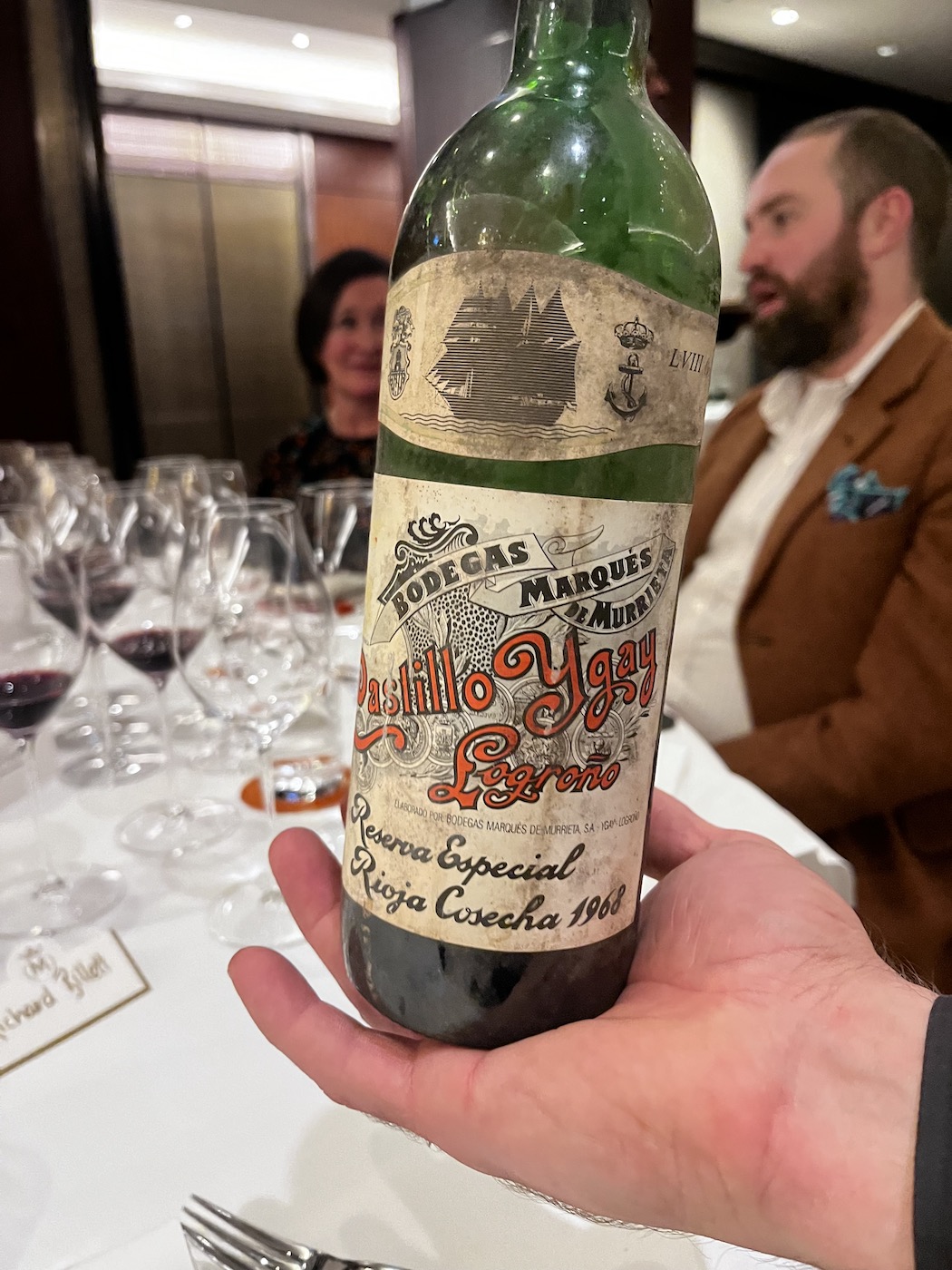 13 and a half years in old and new 225-litre American oak barrels, 6 months in concrete tank, and the rest of the time this wine is aged in bottle before release. The 1968 served to us was bottled in January 1983.

This was an outstanding wine and, if the 1980 was savoury, this was more fruit-driven – think perfect Scottish autumn raspberries; timeless, brilliant, pure and clean the purity is immense. When aged Rioja is this good it just glides down, drink it by itself or enhanced by a touch of aged Spanish manchego with quince jelly. What a treat

Grapes are sourced from a 9-hectare single vineyard that was planted in the 1950s. Each grape variety is fermented separately in 225-litre French oak vats, before 20 months ageing in 225-litre new French oak barrels, and a further 6 months in 15,000-litre concrete vats.

Vicente set out a new vision with this wine; after his father’s death he wanted to “fill the emptiness that we had felt having lost our captain” and the new Dalmau wine would highlight the “New Captain.” He also said that he wanted to produce a Rioja which was more fruit dominant,

Dark fruited, aged Balsamic, spices, silky, olives, black cherries, violets, dark and brooding, the style has changed since its first release and certainly from memory is much more restrained now giving a perfect balance between fruit and savoury flavours.

Sourced from the Capellanía 6-hectare single vineyard that was planted in 1945, this 1986 was first released in the UK in 2006, funnily enough at a tasting lunch held at St Pancras Clock Tower cooked by myself!