Les Crus Bourgeois returned to London earlier this month with a tasting of recent vintages at the Institute of Directors. Now into the second year following 2020’s launch of the re-imagined classification system, Marguerite de Luze (owner of Cru Bourgeois Exceptionnel, Château Paveil de Luze) was in attendance to discuss the progress over the last 24 months, as well as the state of plans for the 2025 classification and beyond. We sent The Buyer’s Mike Turner along to find out more.

Les Crus Bourgeois returned to London earlier this month with a tasting of recent vintages at the Institute of Directors. Now into the second year following 2020’s launch of the re-imagined classification system, Marguerite de Luze (owner of Cru Bourgeois Exceptionnel, Château Paveil de Luze) was in attendance to discuss the progress over the last 24 months, as well as the state of plans for the 2025 classification and beyond. We sent The Buyer’s Mike Turner along to find out more.

“We’ve actually seen the rest of the Crus Bourgeois estates, as well as those aspiring to join the classification, make sustainability an integral part of their application for 2025 where we will require all applicants to be well on the path to HVE ceritification,” says Marguerite de Luze.

I’ve always believed that Bordeaux as a brand, and the Médoc as a region, needs a strong Crus Bourgeois classification. I’m not one of these people that knocks the 1855 Grand Cru Classé system, especially given the fame, money and knowhow they bring to region. Given its closed status, however, it’s not exactly aspirational for those not involved. The Médoc needs something for producers to aim towards, a reward and recognition for a job well done and progressive processes in the vineyards, wineries, and beyond.

The Crus Bourgeois, as we would recognise it anyway, began in 1932 when an original 444 estates began to use the term on their labels. The last 20 or so years, however, have been racked with controversy. An attempt in 2000 to officially ratify the certification, and include a three-tiered system of excellence, led to accusations of impartiality and nepotism. The legal challenges that followed led to its annulment in 2007. A new attempt to introduce a single-tiered, more independent classification in 2010 saw many top estates refuse to take part and the decision to award the classification for one year only led to confusion for retailers and consumers alike.

I’d imagine the vast majority of you reading this already know these details. The reason I’m regurgitating the history lesson here is that it’s important to put the 2020 relaunch into context. It addressed a lot of the criticisms (both internal and external) of the previous years. From where I sit it now appears to offer genuine value for the producers, those distributing and selling the wines and, most importantly, those opening the bottles and drinking them.

The 2020 relaunch ranked 250 Cru Bourgeois producers from across the AOCs of the Mèdoc region on Bordeaux’s famed Left Bank. The three-tier system was reintroduced and split the producers into 180 Crus Bourgeois, 56 Crus Bourgeois Supérieurs and 14 Crus Bourgeois Exceptionnels. This list is the state of play for five years (covering 2018-2022 vintages), until these producers, and those that didn’t make the list for 2020, are asked to resubmit their applications for 2025.

The Alliance of the Crus Bourgeois du Médoc is quick to point to five key principles of the modern classification. Of course, the wines must be of a guaranteed quality as judged by a committee of independent tasters. The wines are also subject to ongoing tasting checks, performed at random throughout the five years of the classification. The other three principles place increasing importance on environmental responsibility, marketing and promotion, technical management, and authenticity of origin and product through the product guarantee stickers that adorn each bottle.

I sat down with Marguerite de Luze who was in London to act as an ambassador for the Alliance board. She is also the owner of Margaux-based, Cru Bourgeois Exceptionnel producer Château Paveil de Luze and as such has keen insight into the reaction to the relaunched system from critics and wine drinkers across the world.

“The reaction has been very good,” reflected De Luze. “Of course, it would take time to settle down, but we’re being told that people have been quick to gain understanding of what we’re trying to achieve and are finding excellent value in the range. If we add that to the traceability that our bottle stickers offer, with QR codes offering full information on the producers, then we hope it shows real value and quality.”

The dreaded term “sustainability”, that means 1000 things to 1000 different people, needed to be front and centre of any modern classification system. In France, the existence of the government’s HVE scheme gives a ready-made benchmark for producers to work towards. Already for the 2020 classification, Crus Bourgeois Exceptionnel estates needed to be certified HVE Level 3 and Crus Bourgeois Supérieur estates HVE Level 2.

I asked De Luze what the plans were for 2025. “We’ve actually seen the rest of the Crus Bourgeois estates, as well as those aspiring to join the classification, make it an integral part of their application for 2025 where we will require all applicants to be well on the path to HVE ceritification.”

That in itself has reaffirmed the commitment that hundreds of vignerons across Bordeaux have towards the HVE programme. The added benefit of being part of the Alliance, however, is the ability to be part of a team in facing the challenges of the future. “As an association we can suggest best practices and are lucky to have some larger estates that have the opportunity to push and experiment with future best practices,” notes De Luze. “That knowledge can then be shared across the Alliance through regular meetings and knowledge-sharing platforms. That teamwork, that ethos, is something I’m most proud about with the Alliance. It’s like a family, we’re not all the same, but we can move forward together.” 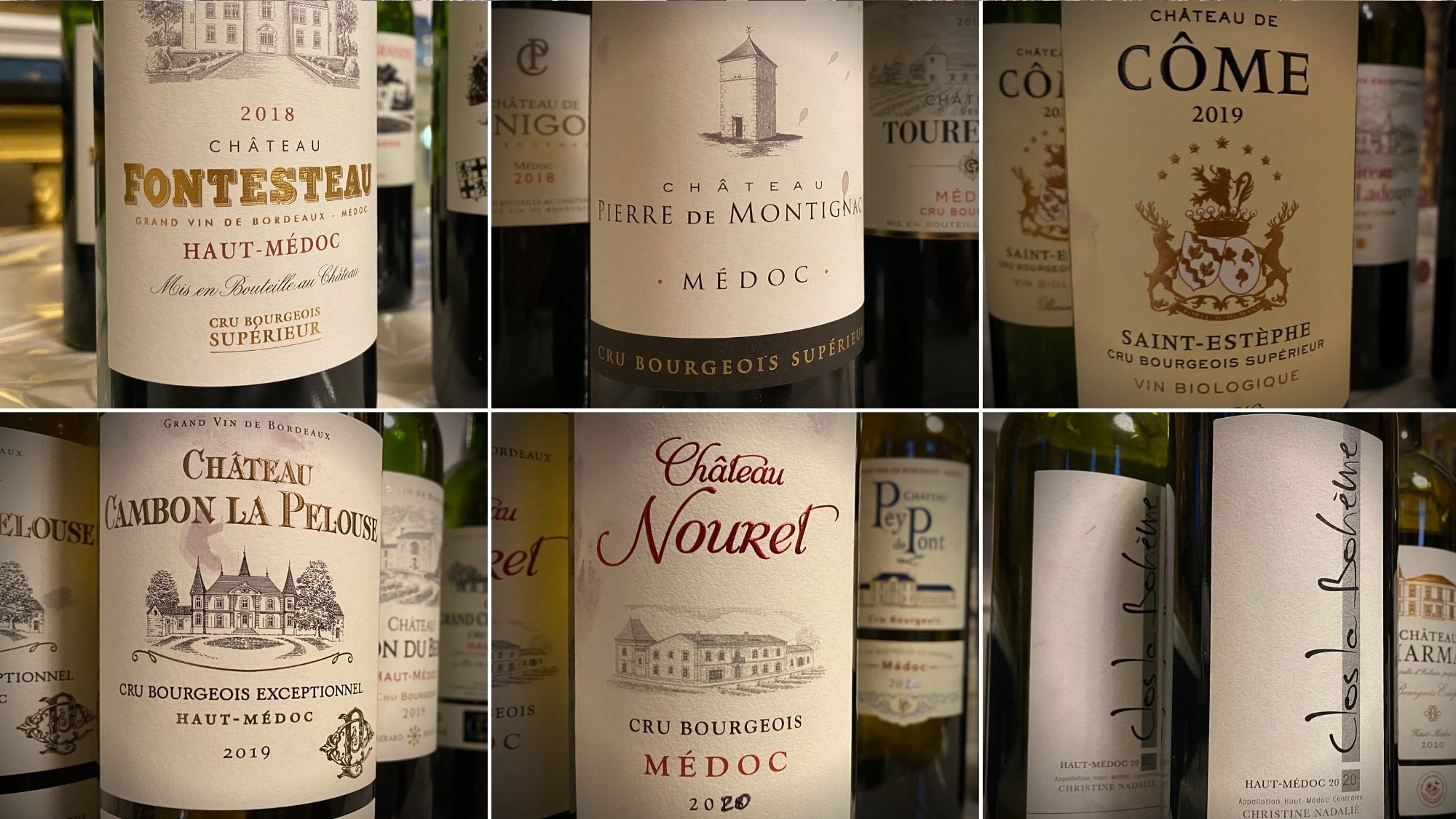 The tasting itself boasted 90 wines from across the 2018, 2019, and 2020 vintages open for a free-pour tasting. The majority were wines I’d be more than happy to take home and make my way through a glass or two, but I’ve picked out 6 wines well worth discovering for those of you looking to increase your Bordeaux offering.

Lovely nose of bramble, dark and red plums, and blueberry from the Cabernet Sauvignon, Merlot, and Cabernet Franc blend. Smoke and liquorice depth from well-judged oak ageing of 12 months (about 20% new). The fruit and spice last all the way through the long finish and a great acidic balance carries the firm, grippy tannins. Great fuller-bodied “by the glass” option, or one for ageing. ABS, RRP £20

Roughly 50/50 blend of Merlot and Cabernet, with a hint of Petit Verdot thrown in for a bit of seasoning. Much more red fruit on the nose and a subtle, lifting sage and rosemary herbal note too. That fruit and herb continue on the palate, but the main kicker here is a full mid-palate leaving a really concentrated-flavour finish. Stone Vine & Sun, RRP £15-20

From the painfully under-rated appellation of Saint Estèphe, this wine boasts an even split between Merlot and Cabernet Sauvignon with a tidy 10% of Petit Verdot thrown in the mix giving a full, firm body with definite ageing potential whilst also having the lucky knack of being very drinkable right now. Plenty of ripe black fruits, a touch of red plum, liquorice, spice and smoke from a year (and a bit) in oak (30% new). Top Selection, RRP £25-£30

Looking for incredible value? Look no further than Treasury Wine Estate’s Château Cambon La Pelouse, made form 55% Cabernet Sauvignon and 45% Merlot on clay-limestone soils just outside the southern tip of Margaux. 12 months in barrel, 50% new, gave a really attractive nose of sweet toast and vanilla backed up by great depth of black berries and plums. Easily enough acidity to carry the ripe and grippy tannin. An absolute steal at £17! Millesima UK, RRP £17

Really pronounced and pretty fruit-filled nose of red and black plums, wild raspberries, and violet flower. It claims to have ageing “in barrels” and I’m going to guess it’s mostly old oak, but happy to be corrected on that. 60% Merlot and 40% Cabernet Sauvignon from gravelly sand and calcareous-clay soils. I loved how smooth and drinkable it was for a 2020, with plenty of those fruit notes filling the mid-palate throughout. Friarwood, RRP £20

A real ‘winter warmer’ from an even split of Merlot and Cabernet Sauvignon grown on sandy soils. Only 10,000 bottles produced, which makes it one of the smaller cuvées in the Crus Bourgeois system. Lovely crisp black plums, cherries and blackberry, with a spicy pepper and liquorice note from oak ageing in barrels from the family’s own cooperage. Warming dark fruit on the finish, this will age well, but the refreshing acidity lifts it enough to drink very well now. Vinceremos, RRP £15-£20

NB In order to make it more useful for readers of The Buyer, I concentrated on wines that are currently available in the UK. There were, however, nearly half the wines that are looking for UK representation. Any importers out there with glaring holes in their Bordeaux offering could do a lot worse than making down to the next Crus Bourgeois tasting.

Mike Turner is a freelance writer, presenter, and educator and regular contributor for The Buyer. He also runs a wine events business, Feel Good Grapes, that explores and discusses the idea of sustainability in the wine trade.