How Blaufränkisch proved its value at Blue of the Danube 2

Whether you call it Blaufränkisch, Kekfrankos, Frankovka or Lemberger there is no denying the importance of Central Europe’s ‘Blue Grape’. Three years since its inaugural staging, the Blue of the Danube 2 event had a triumphant return in London where a whole range of wine styles were in evidence made by 50 producers hailing from Hungary, Austria, Bulgaria, Bosnia-Herzegovina, Croatia, Moldova, Romania and Slovenia. Central European wine specialist Justin Keay picks out the wines that caught his eye, picks one producer that really stood out from each of the three countries, Romania, Hungary and Bulgaria, and explains how the style of Blaufränkisch is changing to suit more modern tastes.

Whether you call it Blaufränkisch, Kekfrankos, Frankovka or Lemberger there is no denying the importance of Central Europe’s ‘Blue Grape’. Three years since its inaugural staging, the Blue of the Danube 2 event had a triumphant return in London where a whole range of wine styles were in evidence made by 50 producers hailing from Hungary, Austria, Bulgaria, Bosnia-Herzegovina, Croatia, Moldova, Romania and Slovenia. Central European wine specialist Justin Keay picks out the wines that caught his eye, picks one producer that really stood out from each of the three countries, Romania, Hungary and Bulgaria, and explains how the style of Blaufränkisch is changing to suit more modern tastes.

“Caroline Gilby MW gave three highly informative masterclasses on the trot: a focus on Blaufränkisch; a discovery tour of highlights from across the region; and ‘Rescued from the Brink’, a look at rare local varieties being rescued from obscurity and extinction,” writes Keay.

‘Has it really been three years since the first Blue of the Danube tasting?’ I asked myself as I walked into the latest, second incarnation of this event, showcasing Central Europe’s Blue Grape known as Blaufränkisch, Kekfrankos, Frankovka and/or Lemberger.

A lot of water has passed under the bridge since the last event was held in October 2019, including a global pandemic, the trashing of the UK’s international reputation and the Trussing of Sterling by the most inept government of modern times. But whilst Britain has focused on becoming an international laughing stock, the reputation of the Blue Grape continues to grow especially in Austria and Hungary, with producers making fresh and accessible wines often with little or no oak, that have strong appeal to contemporary palates. So the timing of Blue of the Danube 2 couldn’t have been better.

This time around the organisers – Caroline Gilby MW and Wine Communications, a UK-based marketing agency run by Zsuzsa Toronyi – opted for something even more ambitious than in 2019. Back then the tasting was dominated mainly by Austrian and Hungarian producers, with a few from neighbouring countries thrown in for good measure – a sort of Hapsburg-territory tasting, if you like. This time there were also producers present from Bulgaria, Bosnia-Herzegovina, Croatia, Moldova, Romania and Slovenia – around 50 in all.

As well as significantly widening the Blue Grape’s geographical area, the organisers had also broadened its varietal definition. That meant Blaufränkisch being joined by the likes of Melnik, Mavrud, Rubin, Teran, Kadarka, Saperavi, Feteasca Neagra, Cabernet Franc, Blatina and Trnjak (the last two indigenous varieties from Bosnia-Herzegovina, “one of the most fascinating wine regions I have visited, with all the complexities of former Yugoslavia in one small country” according to Caroline Gilby MW) and represented at 21 wine-filled tables. All this made Blue of the Danube one of the more fascinating tastings of 2022 and also one of the most well-attended, with levels high despite the event being held at the Town Hall Hotel in deepest Bethnal Green.

So where to start?

The indefatigable Caroline Gilby MW gave three highly informative masterclasses on the trot: a focus on Blaufränkisch; a discovery tour of highlights from across the region; and ‘Rescued from the Brink’, a look at rare local varieties being rescued from obscurity and/or extinction by producers focused on expressing terroir and, in many cases, centuries-old vinicultural heritage.

The third masterclass, ‘Rescued from the Brink’, presented a veritable Aladdin’s Cave of unusual varieties including a few familiar to me – Kadarka from Hungary, Feteasca Neagra (Moldova) and from Croatia, dark, very tannic Teran (aka Refosk, the Boris Johnson of varieties in evoking either strong loyalty or dislike – our table veered towards the latter in its opinion of this Marmite variety, which also grows in Slovenia and Italy).

But then there were a few entirely new to me including Laska from the Szentesi Winery in Etyek-Buda in Hungary, a rather appealing dark variety with smoky, black cherry notes and big acidity and Trjnak from the Skegro Family Winery in Ljubuski in Bosnia and Herzegovina, an unusual-tasting, full-on variety (15% alcohol, no less, with tobacco and cinnamon supporting a dark berry character).

“Since the collapse of communism there has been a revolution across this region with wineries developing their own visions,” says Gilby, suggesting many were returning to varieties once viewed as too out of the mainstream to have broad commercial appeal.

“They all have something authentic about them. And with global warming pushing alcohol values of such grapes as Merlot and Malbec up towards 15%, many have naturally lower alcohol which of itself may be of increasing appeal.”

So which variety from this Aladdin’s Cave had the most appeal?

If my table at the masterclass was anything to go by – and a room-wide show of hands at the end of the tasting suggested it was – the three winners were: the Kadarka 2020 from Heimann & Fiai in Szekszard in Hungary, a light, aromatic take on the big-berried/thick-skinned variety (aka Gamza in Bulgaria, and once the most planted variety in Hungary) from this highly regarded family winery. With just 12% alcohol, this has some of the texture of Pinot Noir with low tannins adding to its drinkability.

Just about everyone loved Prince Stirbey’s Negru de Dragasani Rezerva 2018, a full-bodied, cherry and red berry flavoured take on this rare variety, native to Dragasani in Romania. Not shy, with 15% alcohol but perfectly balanced with acidity and tannins supporting the fruit unobtrusively.

And from Moldova, a Feteasca Neagra (a grape more typically associated with neighbouring Romania but then the two were one country until Stalin invaded then-Bessarabia in 1939). The Asconi Sol Negru Feteasca Neagra 2018 was applauded for its elegance but also power, with floral notes underlying the dark-berried fruit. Highly distinctive.

The main tasting room was organised by country and I got around fewer tables than I would have liked, but there standouts including Vinarja Skegro from Bosnia, a small boutique winery focused on native varieties from this tiny fragmented country, including the aforementioned Trjnjak, a very appealing Carsus Blatina 2017 from the tricky Blatina variety, this one from grapes grown in 50 year old vineyards, and Krs Crni 2021, another take on Blatina which was fuller bodied and had elegant, smooth tannins. A great discovery. 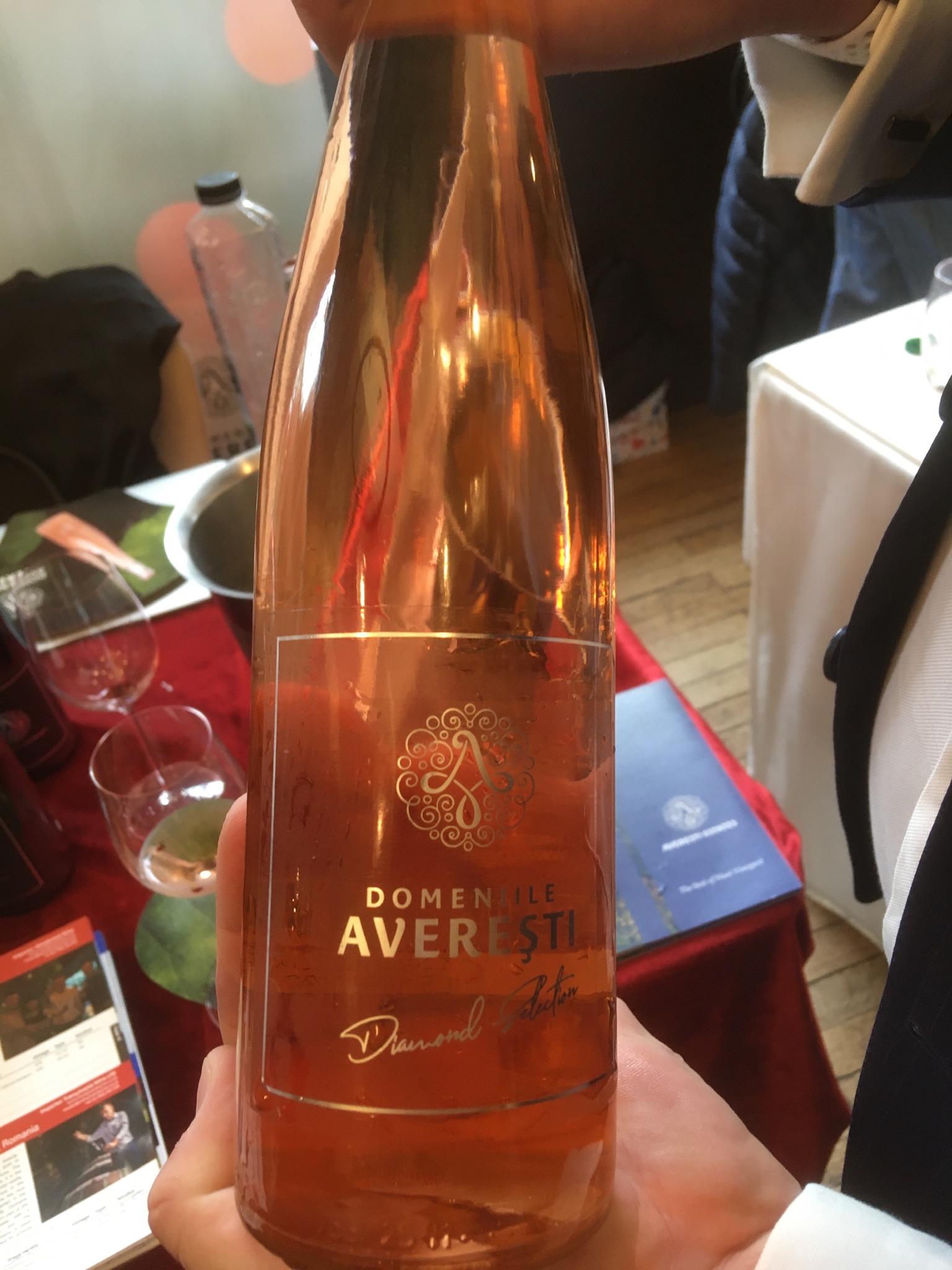 Also noteworthy was Purcari from Moldova (which you can read about in more detail here) whilst from well-represented Romania, Nachbil in the northwest showed a nice Blaufränkisch, Averesti from the Husi DOC near the Modovan border and the Diamond Busuloaca 2021 a refreshing pink from the Busuioaca variety, with hints of rose petal and basil in a broad palate reminiscent of Muscat, but with a long, off dry finish. Very appealing.

From Slovenia, the fresh, forward Brut rosé NV from Albiana, made from 100% Zemetna Cmina, is a lovely wine given added complexity by 24 months on the lees; so too was Dveri-Pax’s Rose Modra Frankinja, a dry wine made from Blaufränkisch by this dynamic, well established winery housed in an 800 year old Benedictine Monastery in north eastern Slovenia, represented in the UK by Savage Selection. 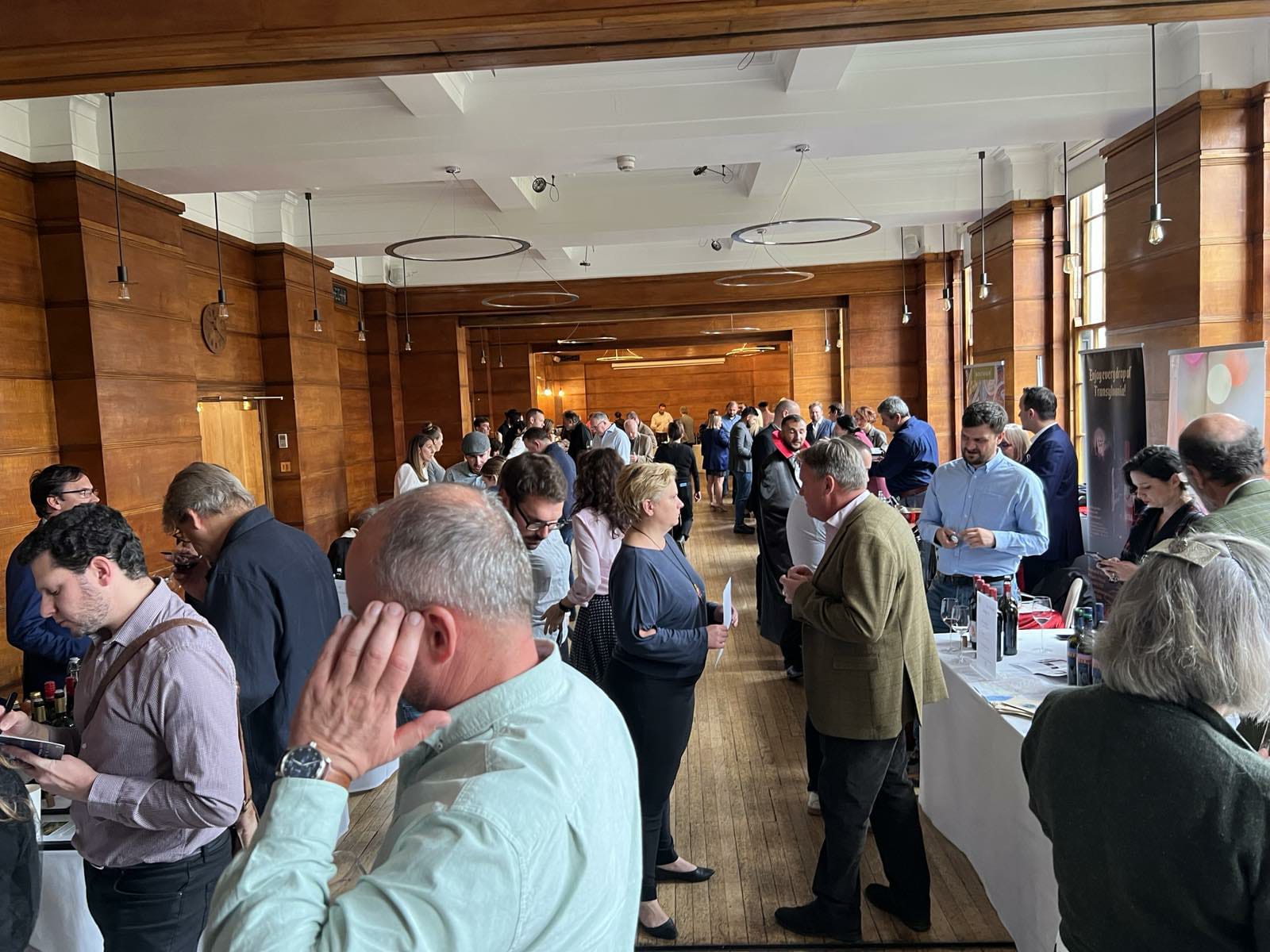 Three producers that stood out from Romania, Bulgaria and Hungary

I was already familiar with this Dragasani producer owned by Jakob and Ileana Kripp, a descendent of the aristocratic Stirbey family (whose principle lights include Ileana’s grandfather Prince Barbu Alexandru Stirbey, Romania’s prime minister in 1927 and also a wine producer at the ancestral property).

Currently producing some 100,000 bottles of mainly native varieties, 70% of production is actually white including a deliciously aromatic Tamaioasa Romanesca, a zesty Cramposie Selectionata (made as still and sparkling) and a great elegant take on one of Romania’s native whites, Feteasca Regala.

But the two reds shown at Blue Danube were stunners: the aforementioned Negru de Dragasani Rezerva 2018 and the Novac 2018, a dark, almost black wine with lots of elegance and structure supported by fine acidity, reminding me slightly of Saperavi, the variety from which, along with Romania’s Negru Vartos, it is descended. Great ageing capacity. Importer in the UK is Solaris Wines. 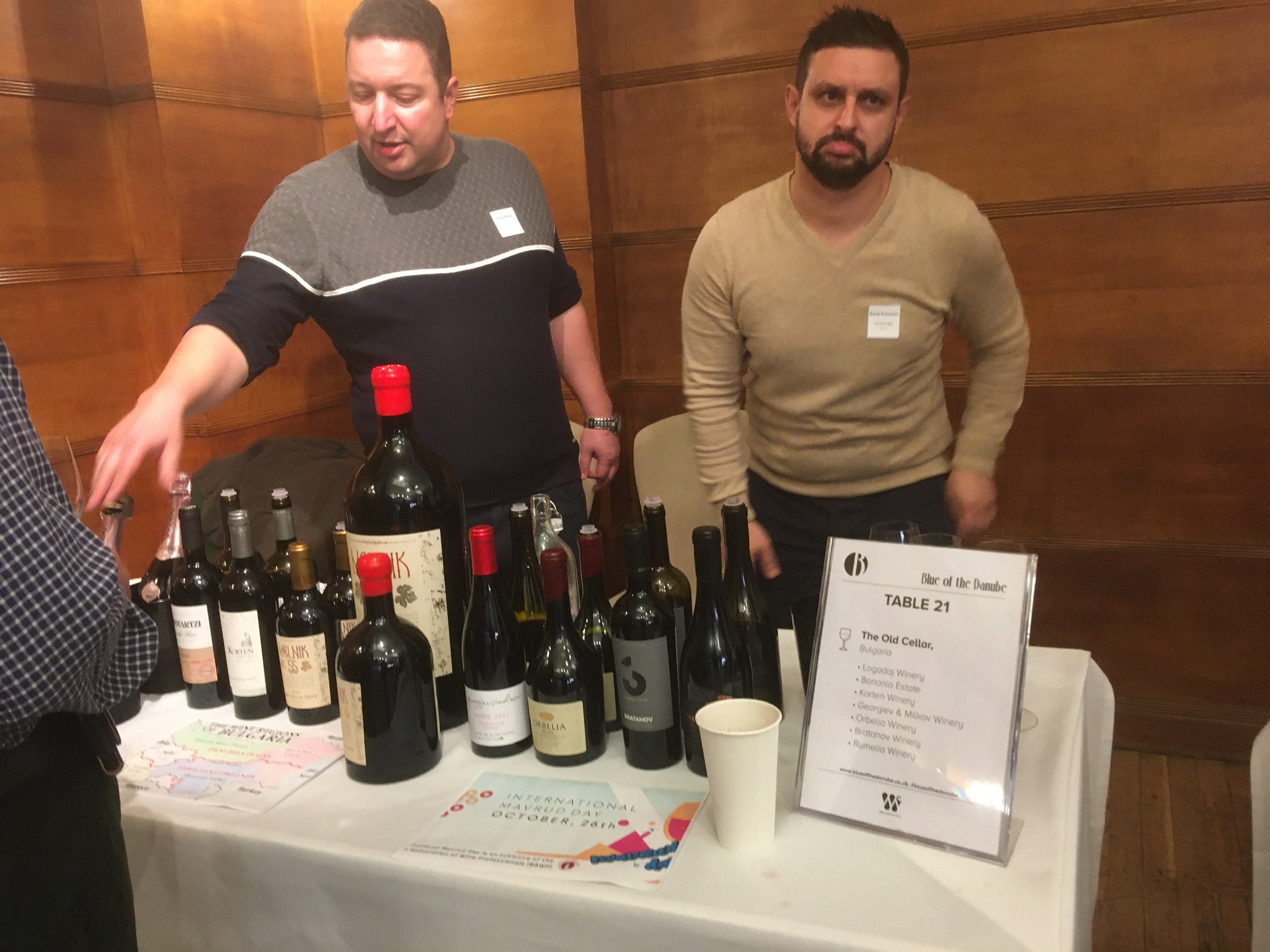 An importer devoted to Bulgaria, the Old Cellar showed a great range of wines showcasing native varieties including Mavrud, this Balkan nation’s answer to Malbec. Two wines produced by the quality-focused Logodaj winery in Struma Valley stood out, the Satin Brut Rose 2016 made from Broad Leaved Melnik, a wonderfully complex wine enhanced by 36 months on the lees, and the Melnik 55, made from the same variety, medium bodied, moderate acidity and tannins, but having a broad palate and fine texture.

From the Bononia Estate the Gomotartzi Gamza 2020 was a very different take on this variety from the Heiman Kadarka, mentioned above: fruity, medium bodied and moreish, this has clearly felt the heat of the Danube Plain region where it is grown.

Very different again was the Rubin 2021 from the boutique Georgiev & Milkov winery in the Thracian Valley, made from fruit grown in the wonderfully named Brestovitsa Vineyard, famed with its 40 year old vines. Rubin was first produced in 1944 by crossing Nebbiolo with Syrah and this is a good example made by two young winemakers who set up their indigenous variety-focused winery eight years ago. Good structure with black cherry fruit on the nose and chocolate and spice on the long finish. 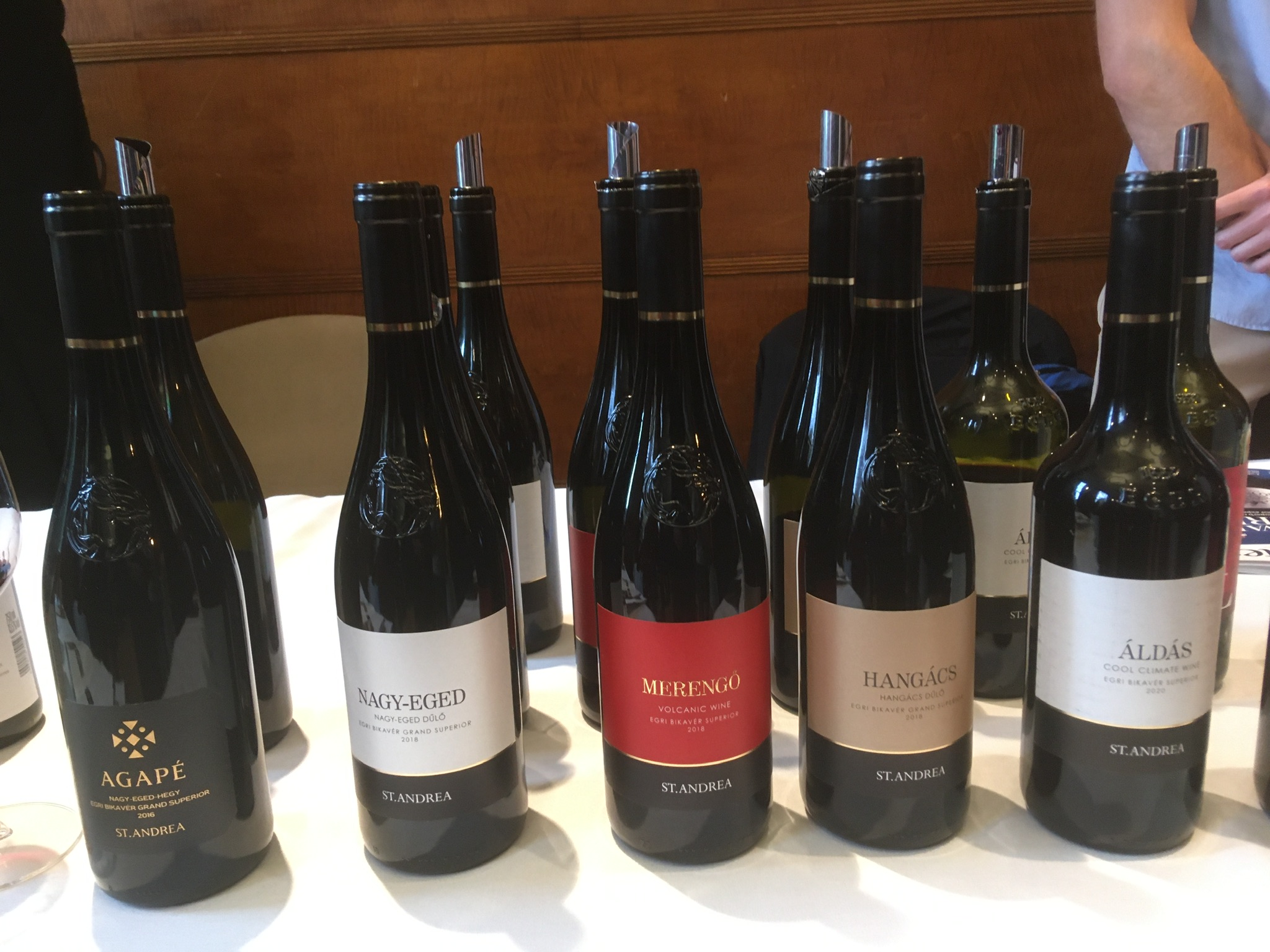 Unsurprisingly perhaps, Hungary was well represented at this tasting with quite a few producers I’d never heard of.

I was certainly familiar with St Andrea – a winery based in Eger to the east of Budapest: since being established some 20 years ago by winemaker Gyorgy Lorincz (whose wife Andrea gave her name to the winery) it has become one of Hungary’s best known producers, offering elegant reinterpretations of Hungary’s best known wine brand, Bulls Blood, or Egri Bikaver. The reds on show here were all multi-blends – very much St Andrea’s thing and, of course, one of the hallmarks of Egri Bikaver – with international varieties like Cab Franc, Merlot and Syrah making their way into blends dominated by Kekfrankos.

Quality is the touchstone here, starting with Bull Egri Bikaver Superior 2020, St Andrea’s nod to Bull’s Blood but oh so much better than the stuff I remember picking up at my local Spar in the 1980s; a blend of no fewer than seven varieties (including Kadarka and the rarely seen Blauburger, not to be confused with Blauburgunder) this has a broad meaty palate, with suggestions of chocolate and spice on the long finish.

A step up in price and quality is the Hangacs Egri Bikaver Grand Superior 2018, a single vineyard wine from the Hangacs Cru; just four varieties this time including Pinot Noir, which gives this elegance and complexity, and some fine acidity. Real quality here in a wine which will age very well.

Very different again is the Merengo Egri Bikaver Superior 2018, made from vines growing in Eger’s volcanic soils and from seven varieties, including the local rarity Menoire (aka Medoc and Kekmedoc, famous for its fragrant, floral notes). This is a really delicious wine, with lots of dark berry and forest berry fruit, and a very long mineral/saline finish, reminding you of the incredible volcanic soil that gives Eger’s wines such a distinctive character. Importer in the UK is Best of Hungary.

Great tasting. Roll on Blue of the Danube Mark 3.

How Russian snub is upping the quality of Moldovan wine