Dismissing biodynamics as hokum is like being a naysayer who was convinced the world was flat, claims a converted Turner.

I wasn’t too sure how to start this piece.  I’ve been an admirer of biodynamics since first hearing all about it from a mate in Bordeaux.  Then on a recent trip to New Zealand I met James and Annie Millton, who are widely regarded as the “power couple” of Kiwi biodynamics. Or at least in the wine world. Not only are the Milltons producing outstanding wines, they’ve helped Kiwi juggernauts like Felton Road and Quartz Reef through their own biodynamic conversions. 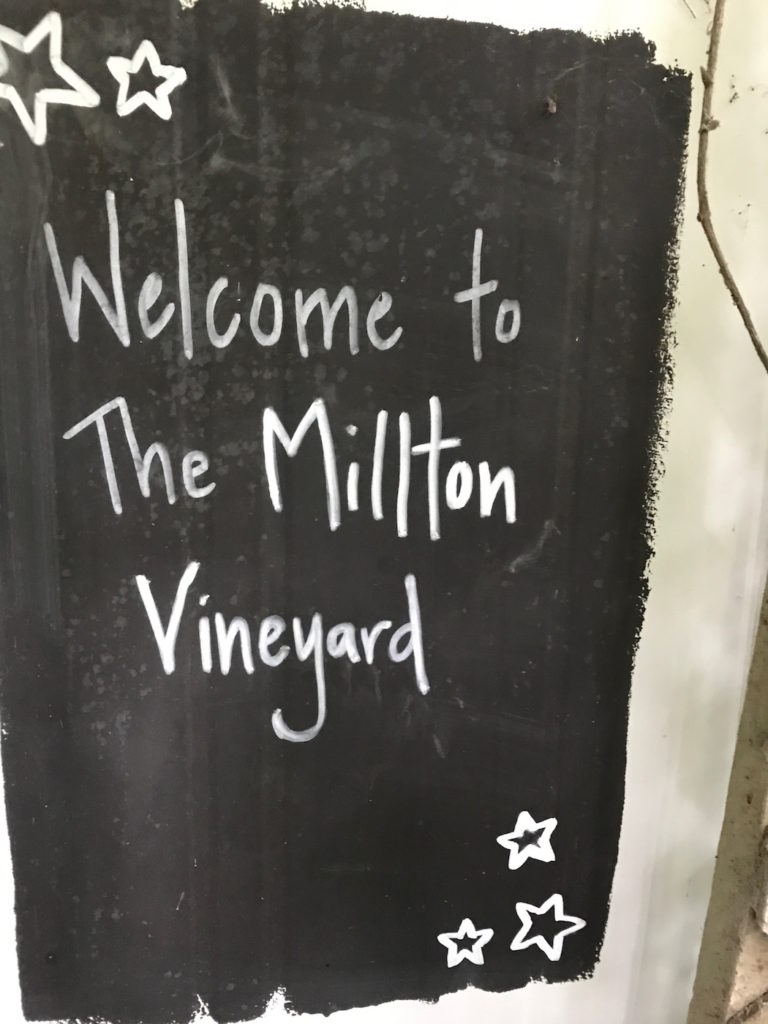 So I wanted to write something about my admiration for people like James and Annie across the world. Problem was, I like to start off with an anecdote, and I just couldn’t think of a decent one. That was until my sister bought me a very cool book… 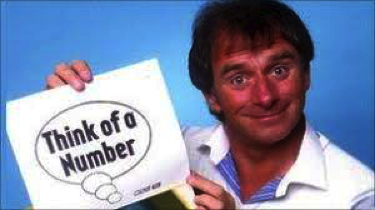 The book? Johnny Ball’s “Wonders Beyond Numbers – A Brief History Of All Things Mathematical”. Amazing!  I am and always will be a Maths geek. Bear in mind, a lot of what follows is my opinion, but hey ho, you’ll get over it. It’s the purest subject of learning there is and I can’t get enough of it. I’m a wonderful person to get sat next to at a dinner party, I can tell you!

Without maths our modern world simply does not exist. Computing, engineering, architecture, physics, none of it. A strange addition to that group, however, was one which I didn’t fully appreciate until I was doing a pure maths degree at university…theology.  Maths forces you to come to terms with things that work, and you might even be able to prove they work, but why do they work? The beauty of something as simple as Pythagoras’ Theory (you remember that one, the one about the right-angled triangles) can be proved, but it bends your head as to why it works, why does this all fit so neatly? What else is out there that works that I can’t explain? Hence the theology element as you get to more abstract maths.

Getting on with it…

Right, enough about maths, I should probably get to the point. The point is don’t be dismissive of things that you can’t explain. It makes you sound like a complete doughnut. Sure, you can question the validity, but don’t dismiss it. If you dismiss something like biodynamics as hokum just because you can’t explain it, or it doesn’t fit what you got taught for GSCE biology, then you’re no better than people who were convinced steadfastly that the world was flat or the earth was the centre of the universe.

In its easy-to-understand form, biodynamics is about creating a diverse bio-community within the vineyard. Plants, animals, microbial organisms, everything living in harmony, “talking” to each other, and promoting the health of the whole system. Your job as a vineyard manager becomes about developing that system, rather than interventional techniques. If you look after the system, the system will look after itself. Pests and disease are, OK not eradicated, but dealt with by the plant itself having built up a stronger immune system.

Here come the criticisms. Chiefly, the preparation of the preparations. Biodynamics, as taught by Steiner in the 1920s, is about treating your crops with preparations designed to boost the bio community and immune system. They’re given numbers 500 through to 508.  Apparently that was because the Nazis banned it and the farmers needed a code (especially when crossing borders). I’ve not had that verified, so if someone out there knows, please get in touch. 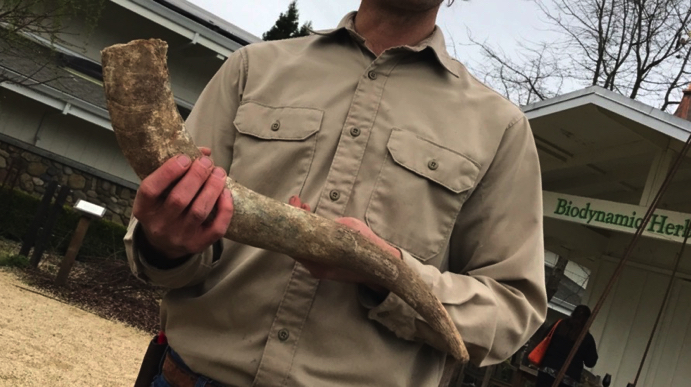 500 is the one everyone’s heard of. You fill a cow’s horn with cow manure and bury it in the vineyard over the winter, where it decomposes. In the spring you dig it up and use it as your fertiliser. Decomposed cow manure is a great fertiliser, so no worries there. The naysayers love giving it the big one about the cow horn thing, but a lot of research is going on trying to find other casings that might be used instead and none can yet be found that can replicate the development of the manure in cow horn. What was I saying about attacking things you can’t yet explain?

Biodynamics is also based around the lunar cycle.  If you’ve been to a tasting recently you’ll have heard a couple of scallywags having a giggle about whether it’s a fruit day or a leaf day… tee hee hee. But come on kids, agriculture has used the lunar cycle for millennia. Nearly every religious holiday we have has stolen its origins from harvest festivals or an equinox or whatever.

Now OK, there are bits I’m not 100% sure about. 502 is the Yarrow preparation. Yarrow itself is very high in sulphur, a catalyst of organic chemistry, which stimulates and detoxes the soil. Sounds good so far, right? So to make it, you take a handful of yarrow flowers, stuff them in a deer’s bladder, hang them in the sun to dry for the summer, then bury it for the winter, then dig it up, brew into a tea, and spray on the vines and soils. Why a deer’s bladder? It’s apparently about the bladder’s function in the body of detoxing. I don’t quite buy it, but who am I to say it’s bollocks just because it seems a bit far-fetched?

When we were out there, standing in the Millton’s Vineyard just outside of Gisborne, James started holding court in the middle of the vines. Now James is into it. There’s no other way of saying it. His belief of how the world around us works is thought provoking and inspiring to the open minded, showcased by everyone at the tasting stopping what they were doing and surrounding the kindly godfather of Kiwi biodynamics to hear what he had to say. I’m not saying you have to buy into everything he says. Should he really let his cows decide with whom he does business?* Well it’s worked for him so far…

As wine lovers and industry people we love a story. But we also need great wine to back them up. One of the most striking things I experience with biodynamically produced wines is I’m yet make a tasting note that doesn’t end with the words “very long finish”. Be it Dawn Jones-Cooper’s brilliant “Nobody’s Perfect” range from Bordeaux through to the super tasty wines of the Chakana team out in Mendoza. There’s something going there. Practical research, i.e. drinking them, proves that. And the mental health benefit of working in such a biodiverse atmosphere? Well that’s another looooooong post on its own!

As an industry, we’re slowly clocking on. Wine clubs and wine bars are springing up across the country dedicated to organic, biodynamic, and natural wines. Bibendum’s recent drive with their “Mindful Winemaking”badge of honour reflects that shift. Consumers are starting to wake up and you don’t want to be left behind.

If you’re still struggling, work out when James and Annie Millton are next in town and open a bottle with them. I defy you to leave that conversation without having your eyes, ears, and mind opened. 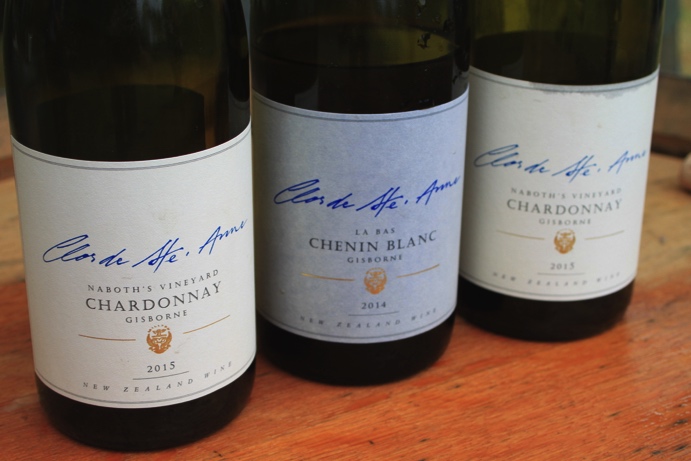