“What we are seeing in established markets is the switch from the explorers, a certain small group of people who are always up for discovering new things, to a broader audience, while at the same time, we are also entering newer markets as well,” says Emmerich Knoll. 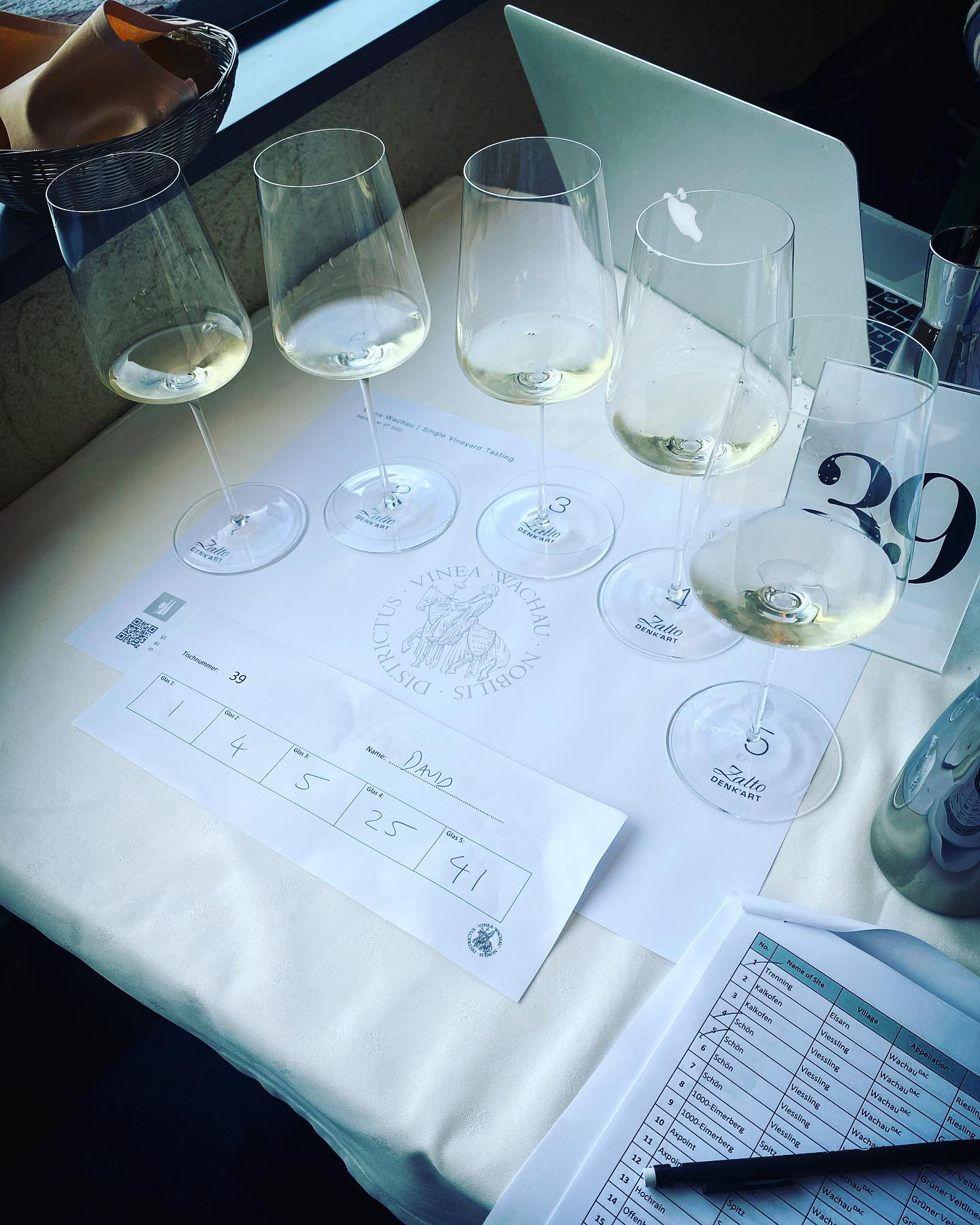 Once described, by Jancis Robinson OBE MW, as “the wine world’s best kept secret,” Austria now finds itself in the mainstream of critical opinion, with sommeliers credited with doing the most to fuel interest in its distinctive, food-friendly wines.

In recent years, merchants have joined the fray, embracing an opportunity to offer something new to collectors frustrated by the scarcity and eye-watering cost of Burgundy; a mere two years ago, The Wine Society launched its first ever Austrian en primeur, a sell-out success that has since been expanded. Most recently, even Mother Nature has done her bit to help, blessing Austria with less challenging vintage conditions than most of its rival European regions.

The secret is out and this is reflected in Austria’s wine export figures which last year topped the €200 million mark for the first time ever, totalling €216.8 million, driven primarily by the premium sector, with the increase in value, at 15.7% significantly outstripping the rise in volume, at 3.8%. Announcing the figures, earlier this year, Chris Yorke, CEO of the Austrian Wine Marketing Board declared that wine lovers around the world “are realising that there’s hardly any other country that offers such consistent quality across the full spectrum of wine styles.”

A new lease of life

The 1980s Austrian ‘anti-freeze scandal’ that decimated wine exports resulted in the world’s most stringent standards for wine production, however the country’s return to international success has been slow and steady, with one of its greatest strengths, an illustrious heritage of family wineries, resulting in a fragmented patchwork of producers, prone to occasional bouts of dogma. Austria’s teutonic, somewhat prolix wine terminology, with its regional nuances, has hardly helped.

Much is changing. The ÖTW (Österreichische Traditionsweingüter), led by Schloss Gobelsburg’s chief winemaker, Michael Moosbrugger, has been stealthily pushing  ahead with a classification of its vineyards, based on their ‘significance’ – with the goal a national, rather than regional, framework. There are now 95 such sites designated Erste Lage, or Premier Cru, while plans are afoot to designate Grosse Lage, or Grand Cru, vineyards in the coming years.

The classification system will be ratified into Austrian law this autumn, with other regions expected to adopt its strictures, while the ÖTW, established 30 years ago, is continuing to expand: founders Kamptal and Kremstal were joined by neighbours Traisental and Wagram, followed, in 2018, by Wien (Vienna) and Carnuntum. Thermenregion, south-east of the capital, is the latest to sign up, and the much larger Weinviertal region is also set to join.

“We think that it is time to develop from a regional association to a national movement,” says Moosbrugger. “It is important for Austria … and we are happy if we are able to achieve this goal within the next five to seven years. We have never been forcing these developments (on fellow producers), we have been trying to convince people that our way is the right one for the country.”

Now well established among critics, buyers and sommeliers, the association’s annual showcase, the Austrian Single Vineyard Summit at Schloss Grafenegg has been expanding even faster, with current non-ÖTW regions such as Burgenland’s Leithaberg and Eisenberg along with Steiermark’s Südsteiermark and Vulkanland also presenting their new vintage releases. This year, for the first time, Wachau also joined the event, showing just over a hundred wines at a nearby location, Schloss Dürnstein, on the final day of the summit.

“With such a great tasting taking place in Grafenegg, we thought we should join forces, especially with so many international guests there, so we asked if we could have our own tasting … and we are very pleased with the result,” Emmerich Knoll, Chairman of Vinea Wachau tells me.

“I am very happy about this development … it is something that came from the reflection that Grafenegg has become an epicentre for the best wines of origin for all of Austria,” says Moosbrugger.

At first glance, the sheer number of wines offered across the six-day event borders on bewildering: primarily Grüner Veltliner, Riesling and Blaufränkisch, the historic Gemischter Satz blends of Vienna also feature, along with Chardonnay, Sauvignon Blanc, Weissburgunder, Grauburgunder, Blauburgunder, Zweigelt, St Laurent and, new this year – courtesy of Thermenregion joining the event – Rotgipfler and Zierfandel. The newly released white wines are primarily the 2021 vintage, though some top estates are releasing 2020s, held back for bottle maturity, while the reds are mostly from the 2019 vintage.

“The single vineyard summit was, of course, a marathon,” says Paula Sidore, Germany and Austria correspondent for JancisRobinson.com , (with) over 500 wines from Austria’s top winemakers in regions from Steiermark to Wienviertal, and all the rivers and valleys in-between. That said, there is truly no better way to get a bead on the vintage and the trends within the regions.”

Indeed, Grafenegg now resembles a ‘who’s who’ of Austrian wine producers. It is an incredible achievement for an event that began just a decade ago.

To celebrate the ÖTW’s 30th anniversary, this year’s summit opened with a special vintage tasting held in the imposing library rooms of Schloss Grafenegg.

“Thirty years is not ten years, not twenty, it is a generation,” said Moosbrugger in his introductory remarks, as he revealed that we were, in fact, late to the party: researching a new book about the organisation and its origins, he discovered that it was actually established in 1991, rather than ’92 as previously thought. 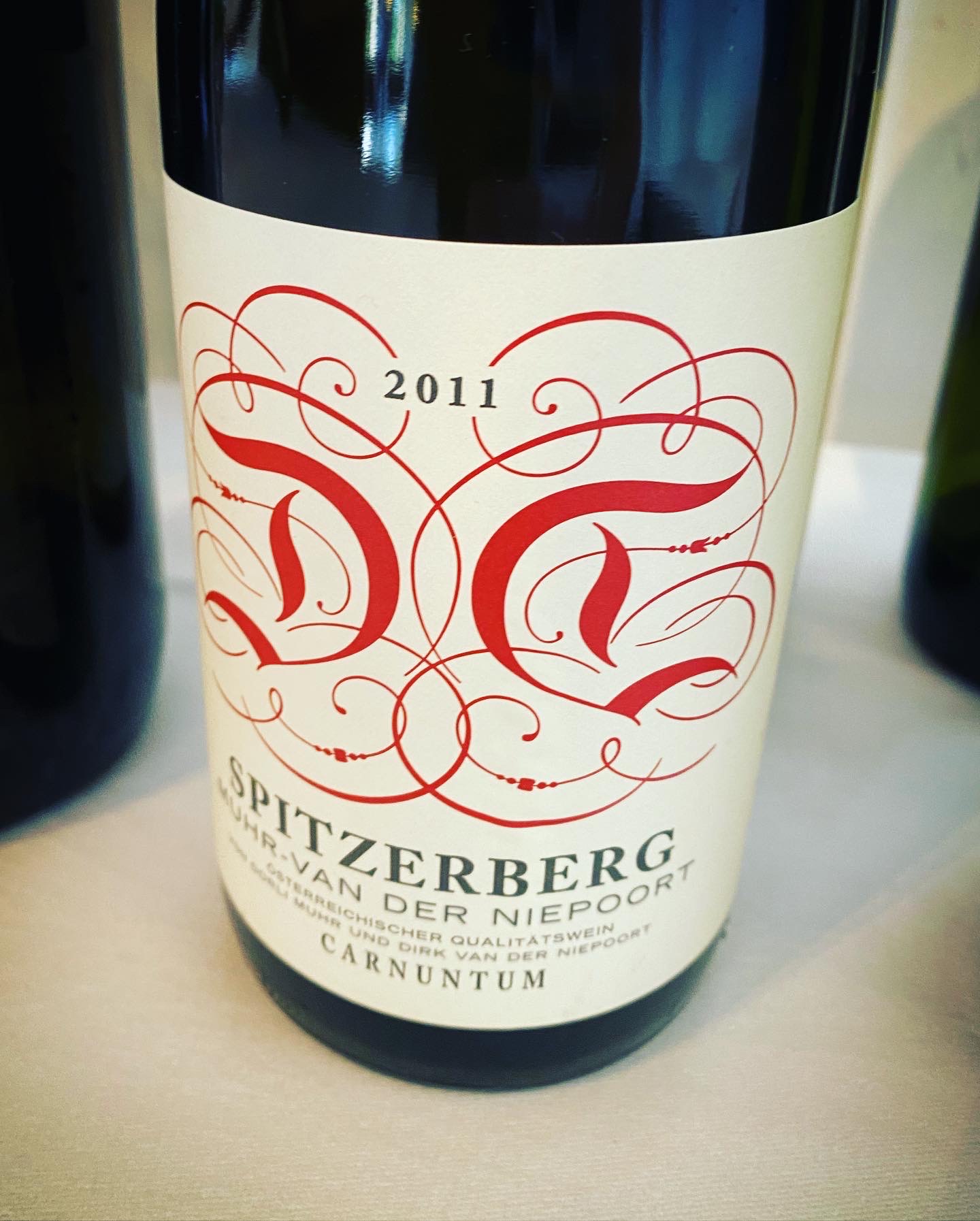 Tasting five flights, down the years, the most striking wines were from the ’91 and ’92 vintages: Dolle, 1991 Riesling, Ried Gaisberg; Jurtschitsch, 1991, Riesling, Ried Loiserberg; Nigl, 1992, Riesling, Ried Hochäcker all retained a sense of brightness, with bountiful fruit, while Loimer’s elegant, peppery 1992, Grüner Veltliner, Ried Käferberg neatly demonstrated that Grüner can also go the distance.

It is always a pleasure to taste the 2010 vintage and it continues to shine, with Fritsch’s 2010 Riesling, Ried Mordthal and Topf’s, 2010 Riesling, Ried Wechselberg-Spiegel offering extraordinary freshness and finesse.  Another highlight was Dorli Muhr’s 2011 Blaufränkisch, Ried Spitzerberg, with its ethereal sense of purity. 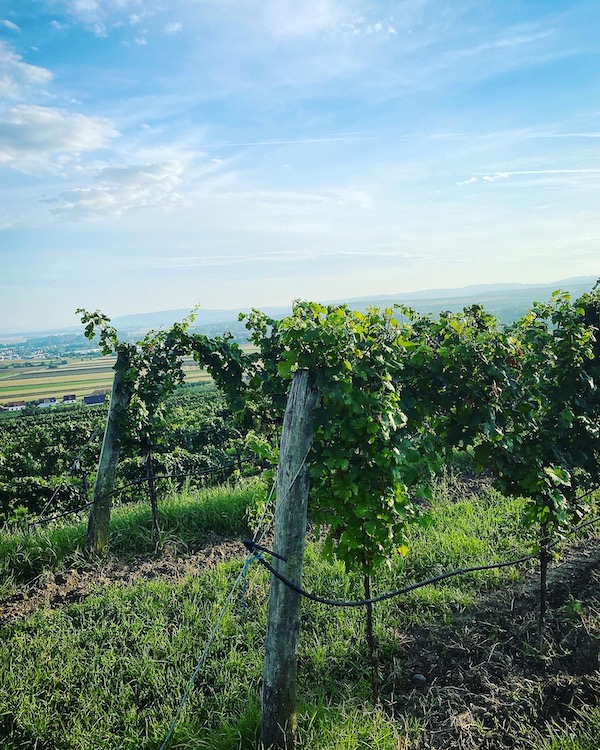 2021 was an excellent vintage that bucked the trend in Europe. Late budding protected vines from the spring frosts and disease pressures that afflicted many other countries. Though the summer saw lower than usual temperatures and isolated hail storms, a six-week sunny spell from the start of September saved the day, with the cool nights supporting acidity and aromatic intensity. This is reflected in the resulting wines, offering an enticing combination of nerviness, delicacy and plump, juicy fruit. There are producer idiosyncrasies, of course, but there is also an impressive consistency to the newly-released wines, most notably in the Danube.

“The 2021 wines showed a thrilling blend of austerity and edge, with the best among them delivering a supple, fruity grace on top. The combination was a delicious wonder to behold,” says Paula Sidore. “There is a dynamism to Austrian wine that is truly rare in the wine world today. Change is embraced, and introspection encouraged, meaning that with equal parts curiosity and challenge, the growers and their wines evolve year-after-year,” 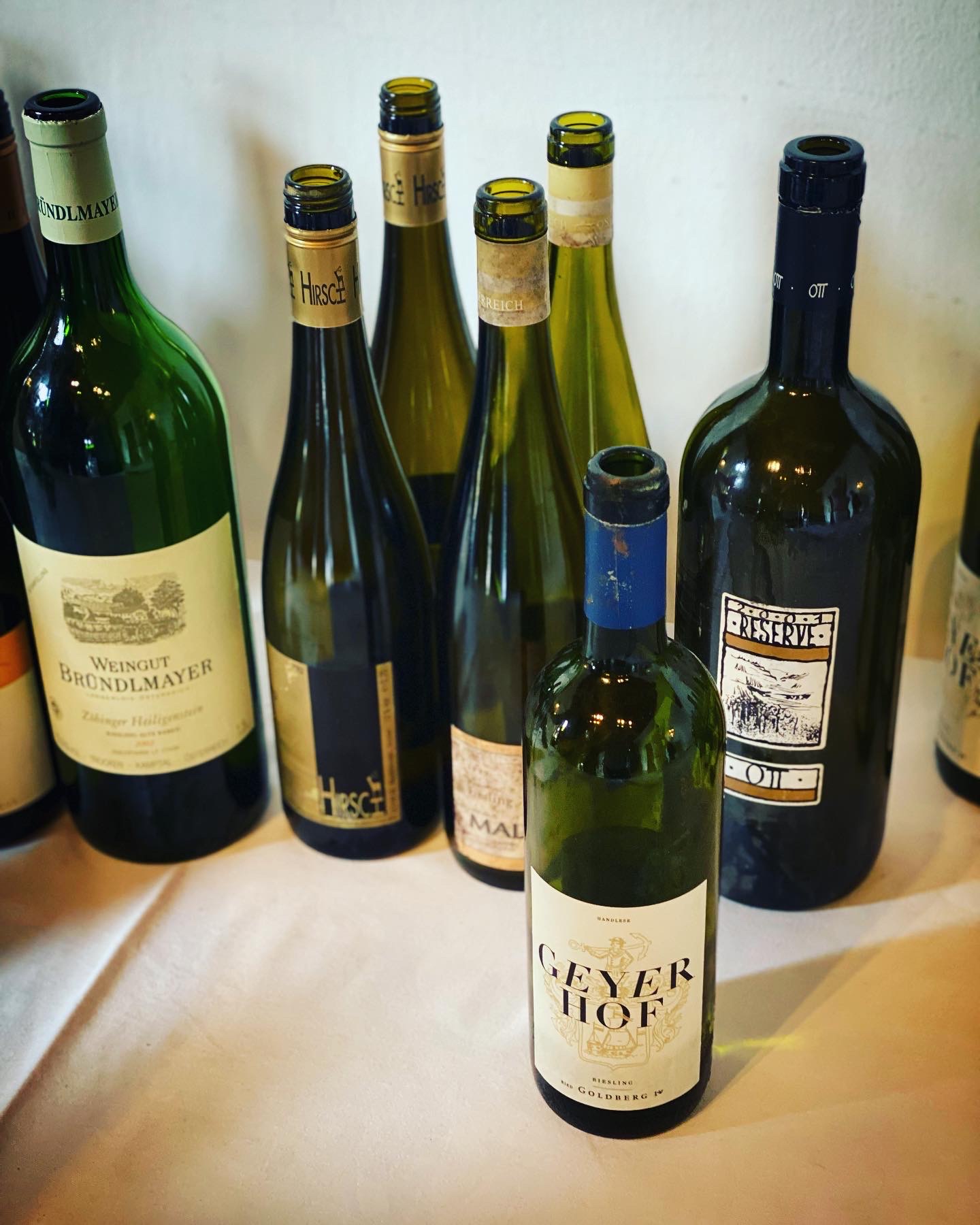 While the export figures suggests Austria’s wine exports are on something of a roll, there also appears to be plenty of headroom for further growth, as the country establishes itself with a younger generation of wine lovers, those for whom Riesling, Grüner Veltliner or Blaufränkisch can offer something different.

“What we are seeing in established markets is the switch from the explorers, a certain small group of people who are always up for discovering new things, to a broader audience, while at the same time, we are also entering newer markets as well,” says Emmerich Knoll.

Austria’s wine industry is lauded for its focus on the environment, with one of Europe’s most significant country-wide sustainability schemes and one of the highest percentages of organic viticulture, at more than 15% of its total area under vine, 20% of which is farmed using biodynamic methods.

“We are constantly trying to develop, to evolve and get better,” says Moosbrugger, “(and) we are getting the international recognition now, in the fine wine departments, the best restaurants and, for the first time, Austrian wines are now offered en primeur, which I see as real indication that our wines are sought after.”