Olivier Krug also shared some insight into why he insists on calling Krug Champagne and not wine, and elaborated on new developments that help the premium on-trade tell a story and give context to the new releases.

It was the kind of street where Pete Doherty would hold his all-back-to-mine bedroom strum-a-long parties in the early 00s. A row of Georgian townhouses between the unglamorous but increasingly hip Whitechapel Road and Commercial Road, where scruffy phone and fabric shops and the smell of Pakistani and middle Eastern food are ubiquitous. 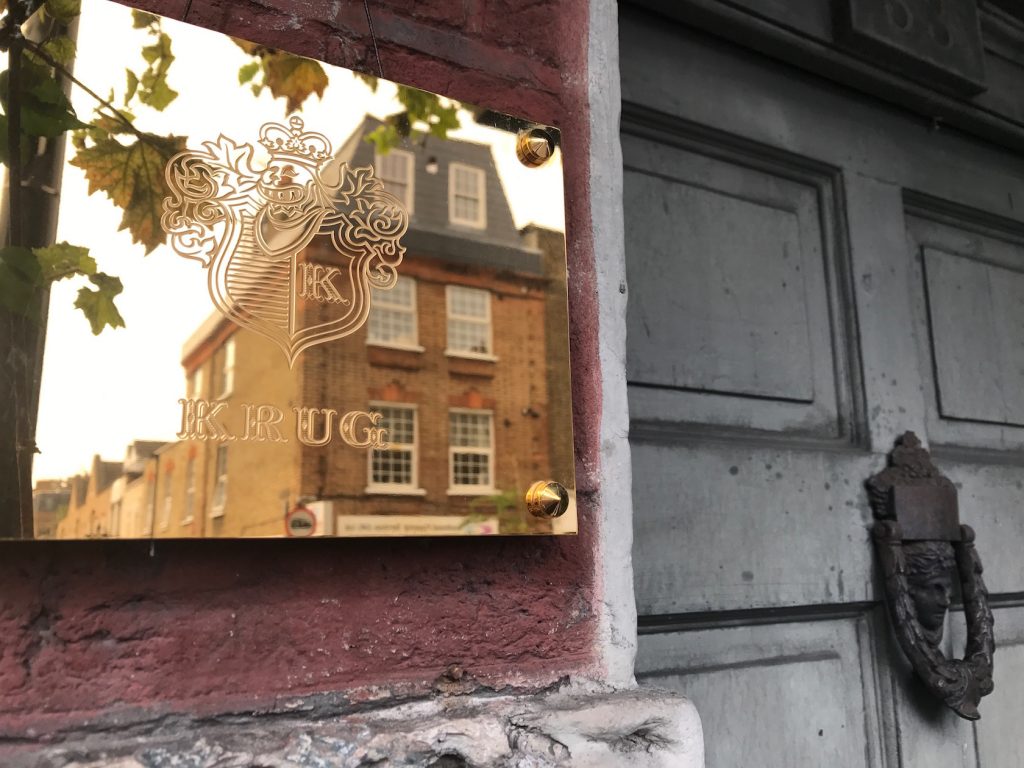 Not the normal part of town for a wine tasting, not least a Champagne launch from Krug, one of the most decadent of fizz houses. But this east London dwelling – the New Road Residence – was where Olivier Krug and his team decided to launch its latest vintage Champagne, the 2004.

From the outside this was proper Jack The Ripper territory, and you wouldn’t guess that behind the imposing wooden door were a selection of the world’s most sought after and priciest Champagnes, except for a small clue – glimmering in the autumn morning light, a discreet golden plaque bearing the Krug insignia. 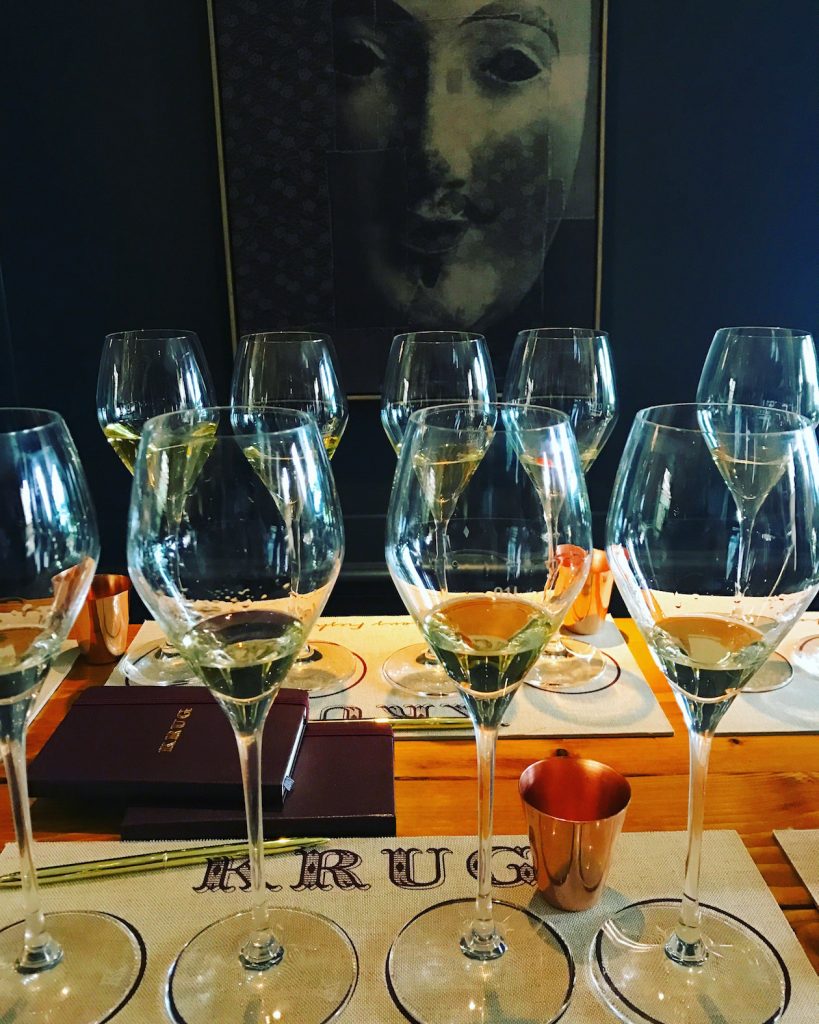 Inside the formalities of the usual LVMH Champagne tastings were nowhere to be seen – these events often involve a large table, white cloths, silence. But here, there were wooden plinths to lean against and stools to perch on, a neon sign proclaiming ‘Luminous Freshness’ (the nickname given to the 2004 vintage) and even music. 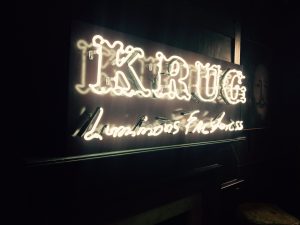 Krug’s director Olivier Krug was on hand to show the new wine as well as three others from the family stable, and he worked the room magnificently telling anecdotes and hob-nodding with a twinkle in his eye.

“Is Krug a great wine for the connoisseur?” he asked a small group of us, and then proceeded to answer the question himself. “No, it’s a great Champagne for pleasure. You don’t need to be a connoisseur to enjoy our Champagne, enjoyment will come naturally when you taste it.”

He makes a clear distinction between referring to Krug as Champagne rather than wine. His point is that when people drink Krug they are only doing so for one reason – to celebrate. So why call it a wine, this simply gets in the way of the story and the process of enjoyment.

With great music, he argues, people know instantly that it’s great; they don’t need telling, or selling or being bored by the detail. Play great music to children and they will dance, they are pure in their response, and this is what he aims for in all his Champagnes.

“We don’t talk about the wine and how it’s made, we focus on the finished product,” he says. “We celebrate it and people know it’s good.” The connoisseur is interested in how it’s made, but that’s secondary to the more base, immediate concerns such as ‘will it thrill my girlfriend’ or ‘will it excite my family’. 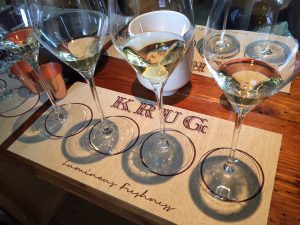 With this is mind we sat down/perched/leant on a steel pole (it was that sort of set-up) to enjoy the tasting. We tasted four Champagnes, kicking off with the current Grande Cuvée, which is Krug’s flagship non-vintage wine and the 164th since it was first created in 1843 by Joseph Krug.

Then we tasted two single vintage wines, the new 2004 vintage and the 2002, before ending with an older Grande Cuvée – the 160th edition – which was based around wine from the 2004 harvest.

Tasting two versions of the Grande Cuvée was important on a number of levels; we got to taste more Krug, we got to compare the two side by side, but most significantly, it opened up a discourse around the concept of flagging up editions on the label of a non-vintage or multi-vintage wine. 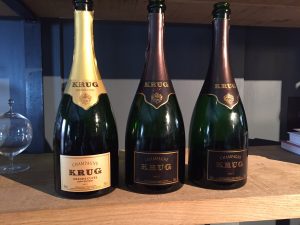 The idea is that a non-vintage Champagne should reflect its house style but as Olivier Krug points out each edition is different, and by telling the customer where this wine falls in the history of the house they have the opportunity of enjoying it more by adding a little context.

This is very important in the on-trade, he says, where it gives the sommelier an opportunity to tell the story of that specific Champagne rather than the story of the house’s NV Champagne, and in certain circumstances it can offer the customer the chance to compare editions, as well as enhancing collectability.

This richness of detail is important to Krug, which is why in 2011 it began printing a ‘Krug ID’ on each bottle of Champagne it produced. This six-digit code can be entered on the Krug app or online at www.krug.com to get detailed information on each product, including tasting notes from cellar master Eric Lebel.

And so to the wines, notes on each  below – including Krug ID for further digging

The base for the 164th Krug GC comes from 2008, but it contains wine from 11 different harvests, the oldest coming from 1990. It has a bright nose with toasted crumpets (buttered) and green apple. On the palate the first thing that hits is the acidity; green apple again, crisp and refreshing. Then the richness comes with nuts and candied fruit notes adding an opulent edge. The finish is superb; light with a weightless quality in the mouth, but long. It keeps going. 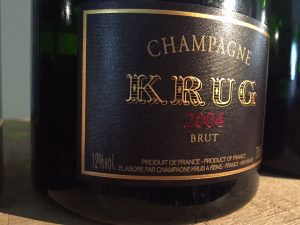 The debutante, and the wine which dragged us to the East End at 10.30am on a Wednesday morning. It doesn’t disappoint, this is a serious Champagne with complexity and verve. 2004 was a good year following the heat and frost of 2003 and this is reflected immediately in the bold nose which is fleshy with a smoky, almost Frazzles-like note. It’s floral too with buttery biscuits, honey and citrus fruit, the latter coming through intensely on the palate. A grippy acidity binds it all together, and this tastes like a wine that can age and age. “So Krug – the elegance of Krug is here,” says Olivier Krug of the ’04.

This Champagne is still on the market, the house tries to have two vintage releases on the market at the same time, so it was a sound choice to taste alongside the 2004. It’s a very different wine. A more developed colour gives clues to its rich character; it’s all toast, honey and nuts with a smattering of white peach. There’s a delicious Sherbet Dip Dab acidity that tingles on the tongue at the finish. This is ample, pure and elegant and like the ’04 will age very well. 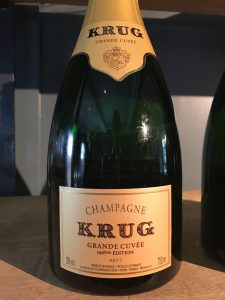 An unexpected treat to end the tasting, this is the 160th edition of the Krug GC and was based on wine from the 2004, hence its inclusion. A limited number of bottles of this edition are being released. This is a blend of 121 wines from 12 years, the oldest coming from 1990. It’s an expressive, immediate Champagne with a punchy nose of lime zest and honey. In the mouth it’s rounded and remains fresh with a delicious smoothness of mousse. There’s ginger and freshly baked bread and a knowing and confident richness. Very classy indeed, and to prove Olivier Krug’s point, very different from the 164th edition.