“The palate is so smooth and fresh you could put a straw in the bottle,” writes Dean about the 2017 Château de Marsannay Gevrey Chambertin.

“The idea is to work on the soils, which is the most important thing for us, to conserve and resist changing climate,” Sylvain Pabion says, fresh from finishing up after the 2021 harvest.

The celebrated winemaker at Château de Marsannay, reveals that in 2021 he has managed just 20 hectolitres a hectare from his 34 ha estate in this Northern part of the Côte de Nuits having lost 50% of the crop in the frosts of April. Since that time the climatic conditions have put him and his team on the back foot in what will be the final year of organic conversion, before certification

“We are working with organic stock, planting a lot of trees in the vineyards and keeping a lot of grass – the idea is to put a lot of life around our vines to help combat very hot summers, planting 10,000 vines per hectare, keep freshness and keep water in the soil– cover crops are very important in this.”

Since Pabion joined owner Olivier Halley at Château de Marsannay in 2015, three years after Haley bought the estate, there has been a quality revolution going on. Much of his focus has been on breaking down the big basic Marsannay cuvée into separate bottlings — the wines are now vinified separately into 45 different cuvées; the conversion to organic viticulture began in 2018 (along with the vineyards of Château de Meursault which Halley bought at the same time, making 107 hectares in total); Pabion has reduced sulphur by 50%; filtering is largely a thing of the past; and the vinification and élevage are tailored specifically to each cuvée.

So what felt like a château aimed solely at the tourist market with a small number of multi-climat blends, has now become a serious player with a range of quality, single cuvées in an appellation that has in itself been getting more and more respect for offering great wines at half the price of elsewhere on the Côte de Nuits.

Pabion confesses that he always used to buy Marsannay wines and this is partly why he decided to join Château de Marsannay – that it is a region fast restoring the high reputation it had in the past, and one which has got an exciting future ahead of it. Quite apart from the fact that Marsannay still offers wine buyers relative bargains compared to the escalating cost elsewhere, and that climate change is starting to favour ‘lesser’ sites but, in the background, Premier Cru status awaits 14 climats that are expected to have the award by 2025 at the latest.

For the five-cuvée tasting Pabion has chosen wines from the 2017 vintage. “It’s a very classical vintage – very interesting – because it comes within the hot years of 2015, ’16, ‘18, it is very classical and very balanced with the average yield of 37hl/ ha being quite low. NB all prices are for 6x75cl case DP 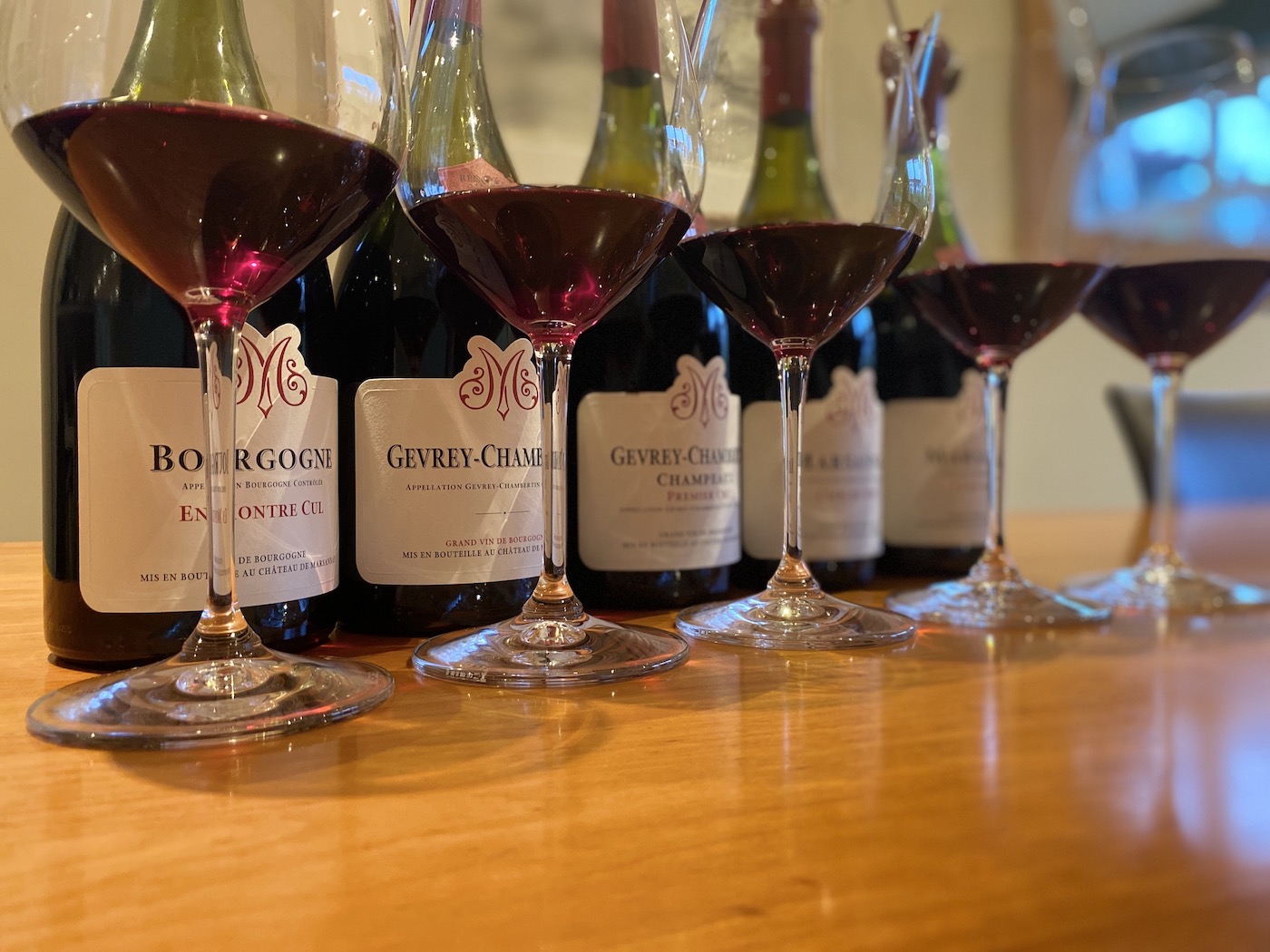 It’s getting harder and harder to find a quaffable red Burgundy that has juicy red fruit, with a crunch to it, and costs less than £20, but this is one such wine. It’s from a small urban vineyard within Dijon city limits that is on steep limestone-gravel soil with a South-East aspect – in other words the fruit gets ripe in a warm spot but, by being so far North in Marsannay and with the right soils, the fruit is red and crunchy.

Pale ruby red to look at; it has a slightly closed nose at this stage but opens out after time into a pretty bouquet of red cherries, vegetal notes; juicy, fresh, vibrant acidity with ultra-fine texture and dense ripe tannins. This is a crisp, easy drinking Bourgogne rouge from a classic year that, on account of its unique position, offers a lot of bang for your buck. (£118.38)

Wines like Clos de Jeu are a great example of why Marsannay is an appellation that should be on every Burgundy lover’s radar, offering top quality with prices that won’t bust the bank. This is an elegant, classy Pinot that has some bestial and undergrowth notes, well balanced with lovely ripe black fruit.

To taste? Pale-med ruby with a purple hue; animal notes, sous bois and blackberry fruit predominate in this complex bouquet, which also has wisps of smoke and liquorice root; the palate is fresh, round, silky and juicy but offering more depth than the En Montre Cul, with tannins that are fresh, ripe and dense, the 40% whole bunch bringing a lovely register to the palate with a twist of citrus on the tight finish. Plum, mulberry and raspberry flavours, great acidity and balance. (£168.39)

2025 is the date when Marsannay is expecting to get some 1er Cru status wines for the first time, and this will be right up there as a candidate for one of the first.

This is from a plot of 70 year-old vines grown on limestone-gravel soils with a sub-strata of clay which keeps the water and freshness in the vines. It is intense, a little backward but offering pure joy on the palate – notes of ripe, concentrated red-berried fruit, crisp on the edges, with fine detail and mineral-charged energy. Tannins are so well integrated but still offer a frame for the delicious fruit flavours. (£218.39)

A beautifully elegant Gevrey Chambertin that owes its complexity to being sourced from 11 plots across 2 hectares of the Gevrey hillside all with different soils – brown limestone, marls and red clay. The wine is vinified without stalks and then aged in new oak (35%) as well as first and second fill barrels, for a period of 13 months followed by three months in tank.

You could be forgiven for thinking this is not a Gevrey-Chambertin given how elegant the wine is, and sweet and fleet of foot the tannins. To taste, the wine is transparent cherry red; beautifully aromatic with red cherry, raspberry, red liquorice, blossom; the palate is so smooth and fresh you could put a straw in the bottle; tannins fully integrated, the wine leaning much more to red fruit than black in this vintage and from this estate – hints of plums and rose petals. Seriously delicious and drinkable. (£228.39)

From an East-facing plot of 60-year-old, low-yielding vines on brown clay-limestone soils at the end of the cote de premier cru, the fruit is aged in 75% new oak for 12 months followed by five months in tank.

Complex and classy this has typical Gevrey serious heft and intensity with a polished, ripe fruit core of red plum and cassis. The wine is pale to medium ruby-purple, transparent; the nose offers deep animal notes and mineral laid over black juicy fruit; the dense tannins are still firm, chalky and serious and need some years in the cellar, the acidity is bright, lending structure. Feels shallow in the mid-palate. Needs time. (£403.39)

All wines from Château de Marsannay are imported by Justerini & Brooks