“Just like our California wines…. we have the French sun above and soil beneath, but everything in between is Penfolds!” says Gago about the new Penfolds French wines.

There is nothing Peter Gago enjoys more than presenting a new Penfolds Collection in person to a group of wine experts. The restrictions on travel imposed by Covid meant that for the past two years the chief winemaker at Penfolds has been a little hamstrung which, in some way, explains why the presentation of the 2022 Collection at Trivet restaurant in London on June 28th was such a momentous occasion.

The wines Gago showed, quite apart from the new 2018 vintage of Grange and the rest of the new Collection, were spectacular. And given that one of the library wines was a 1962 Bin 60A Coonawarra Cabernet Kalimna Shiraz this was an event that will stay long in the memory.

The key focus of the event was Gago showcasing how the ‘Penfolds House Style’ works well in a global context – and across three countries of origin. This was also the first time that the two new Penfolds French wines had been shown to the UK press.

Over lunch Gago emphasised that the day was there to be enjoyed and not be too educational or technical but, whenever you are in his company, there is little chance that you can deny yourself the pleasure of mining the mind one of the greatest and most entertaining characters in wine today.

Gago noted that the ‘Penfolds House Style’ allows him the freedom to take the brand on a global journey, to explore prime wine regions across not only Australia but the entire world or, as he says, “jumping oceans.” Penfolds’ ambition to make wine outside Australia started decades ago and is now gradually being released with projects going on in Champagne, Napa, Paso Robles and from today the release of the Bordeaux project… from what I heard over lunch this is merely the beginning.

“This is the start of our French winemaking journey,” Gago says, explaining how he has collaborated with Dourthe for Penfolds II, and made FWT 585 at Cambon la Pelouse with Penfolds’ senior winemaker Emma Wood on the ground. “Our main objective? To remain true to the winemaking ethos of both wineries, to deliver the best blend possible, to ideally make Bordeaux and South Australia proud. This wine is not about bigness or boldness or assertion. It is blended to convey an ethereal lightness, subtlety on the palate – sensitively binding two hemispheres, Old World and New.”

FWT stands for French Winemaking Trial which, as Gago explains, fits well with the whole ethos of the company.

“Many great Penfolds wines were born from experimentation and trial; RWT 798 (Red Winemaking Trial) Barossa Valley Shiraz, Yattarna Bin 144 (144 winemaking trials) 1951 (experimental) Grange – and now FWT 585. The wines made in France pay respect to French terroir, yet one thing remains overly consistent…the Penfolds stamp. Just like our California wines…. we have the French sun above and soil beneath, but everything in between is Penfolds!” says Gago.

So how were the new Penfolds French wines tasting?

On arriving at Trivet we were greeted with the 2012 Thienot x Penfolds Blanc de Blancs Grand Cru, first released in 2019 this was to celebrate Penfolds 175th anniversary and the start of a French and Australian wine alliance.

But there were many glorious and some historical distractions over the course of the afternoon that at times it was difficult to concentrate on the two prime releases, but here we go…. 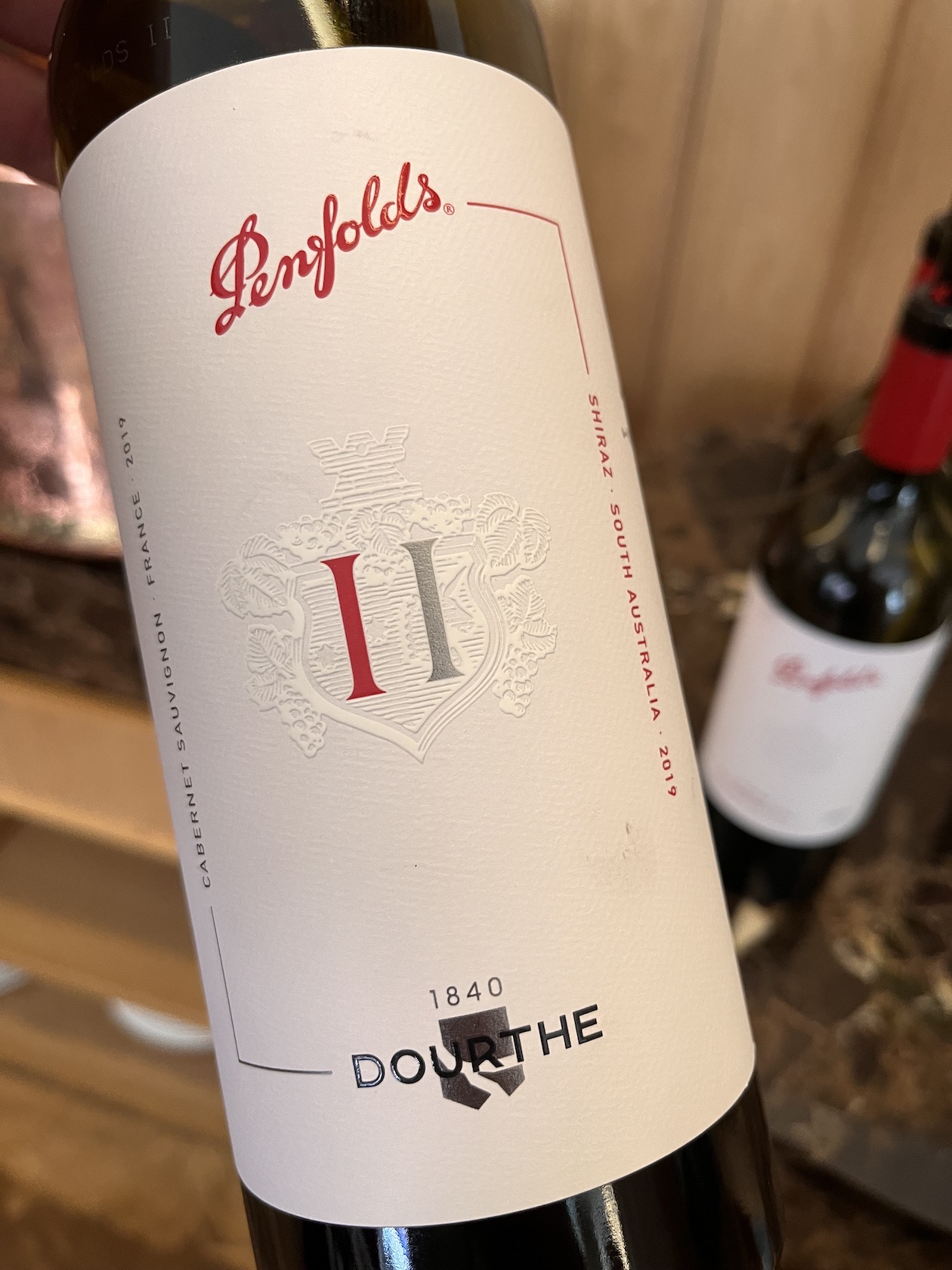 Shiraz is currently at the fore, a dark brooding wine, full of excitement, freshness and a classic Aussie blend style, the Bordeaux element certainly gives it tannin and depth, a hint of fine cedar, nutty, white pepper, fresh violets and juicy dark fruit. Umami and exciting, this will develop superbly over decades… a new dawn! (release price AUD $500) 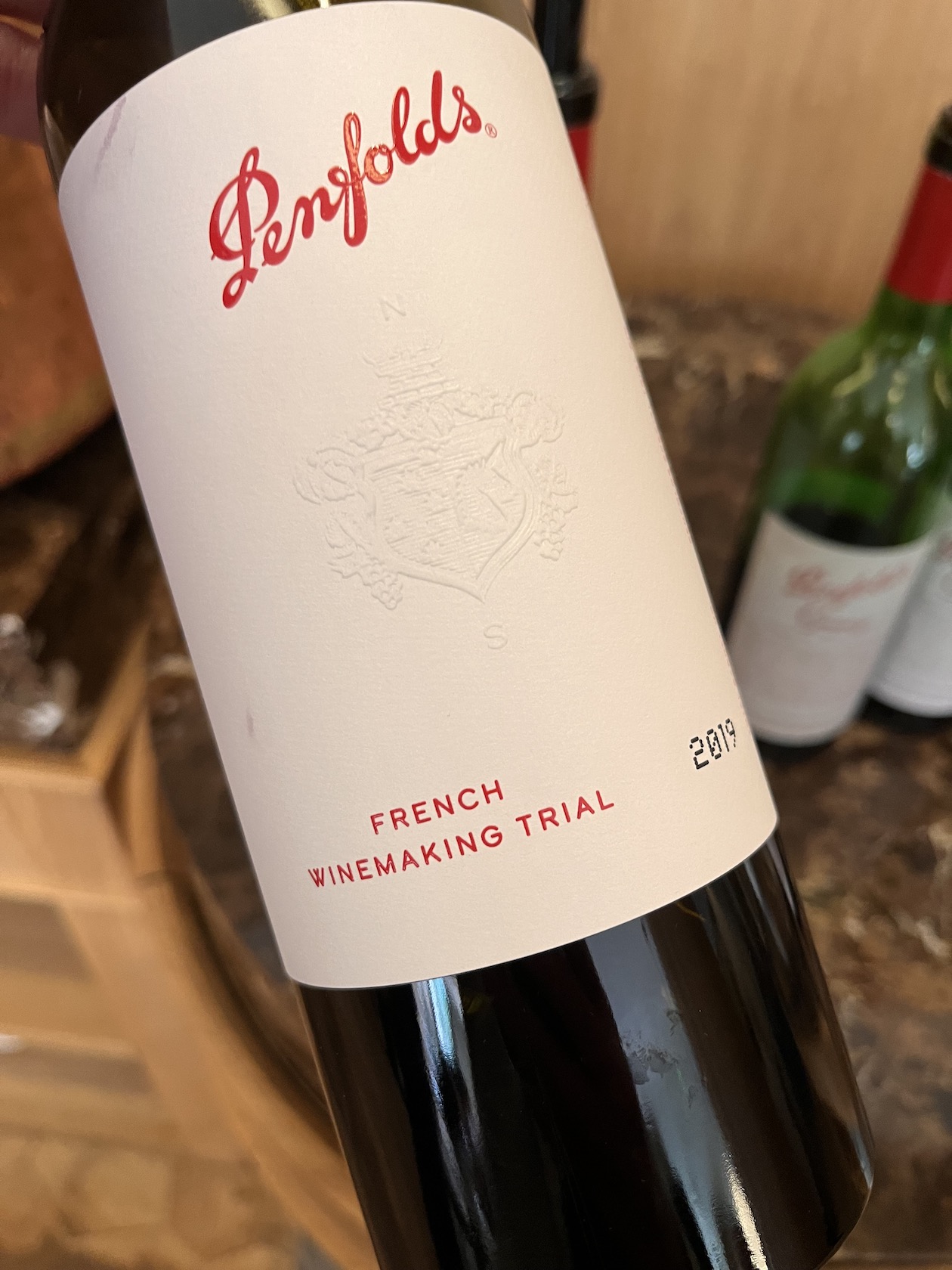 Beautiful aromatic perfume on the nose of herbal hedgerows, hints of lavender. In the mouth the wine has a luscious hit of blueberries, coating a muscular savoury feel – Chinese duck, creamy and spiced with sweet, polished cedar wood. Gentle and hugely appealing palate on the finish. This will age over the next 20 years but, with decanting and suitable glasses it already has great potential. (release price AUD $120) 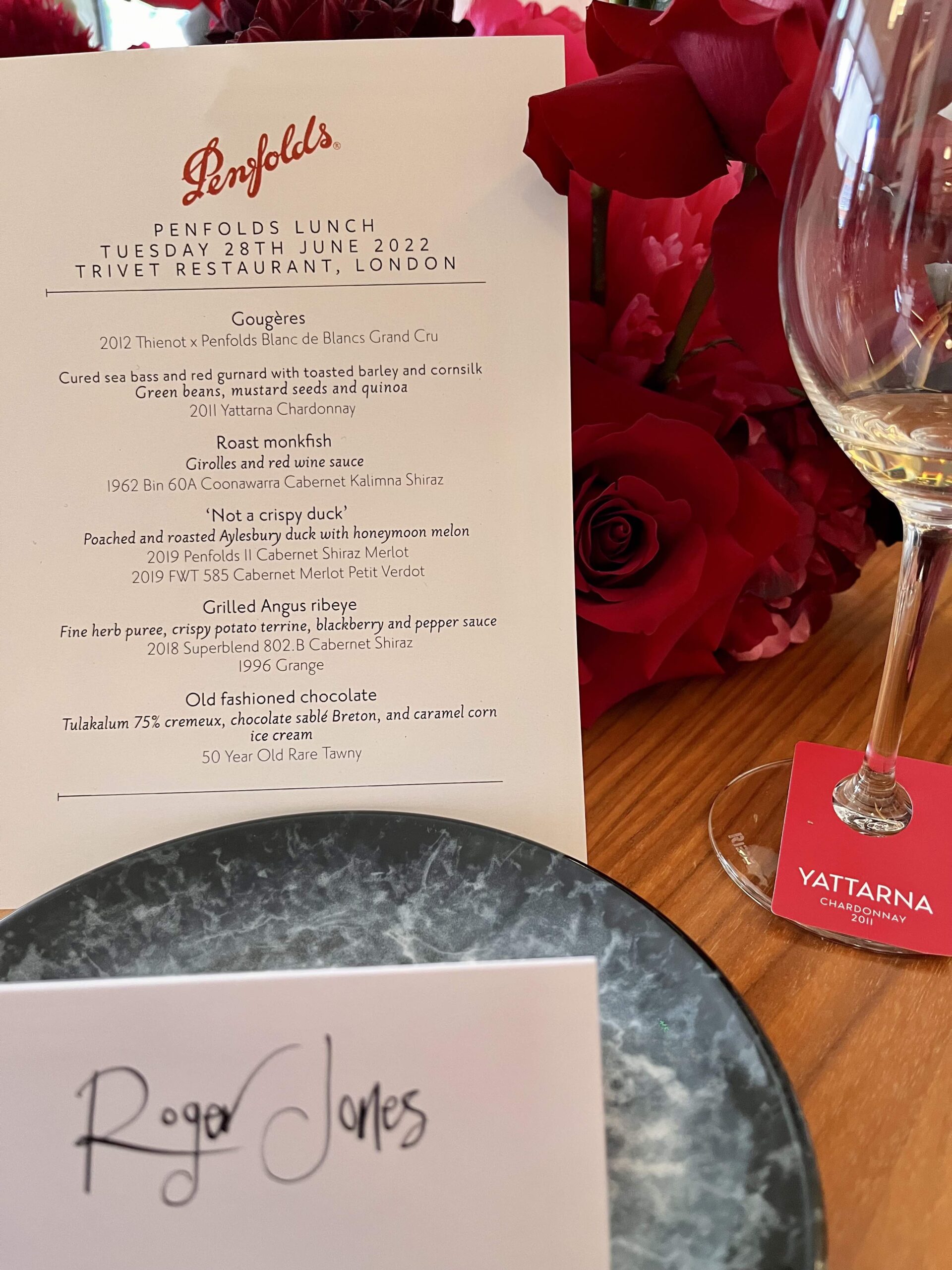 Lunch started with the 2011 Yattarna Bin 144 Chardonnay, a wine that was launched in 1998 with the 1995 vintage. This 2011 is pretty perfect – notes of buttercups, delicate Pear William, nutty, refined, fresh pineapple, white nectarines all combine to give such purity and relaxed, but refined, wine with depth and clarity. 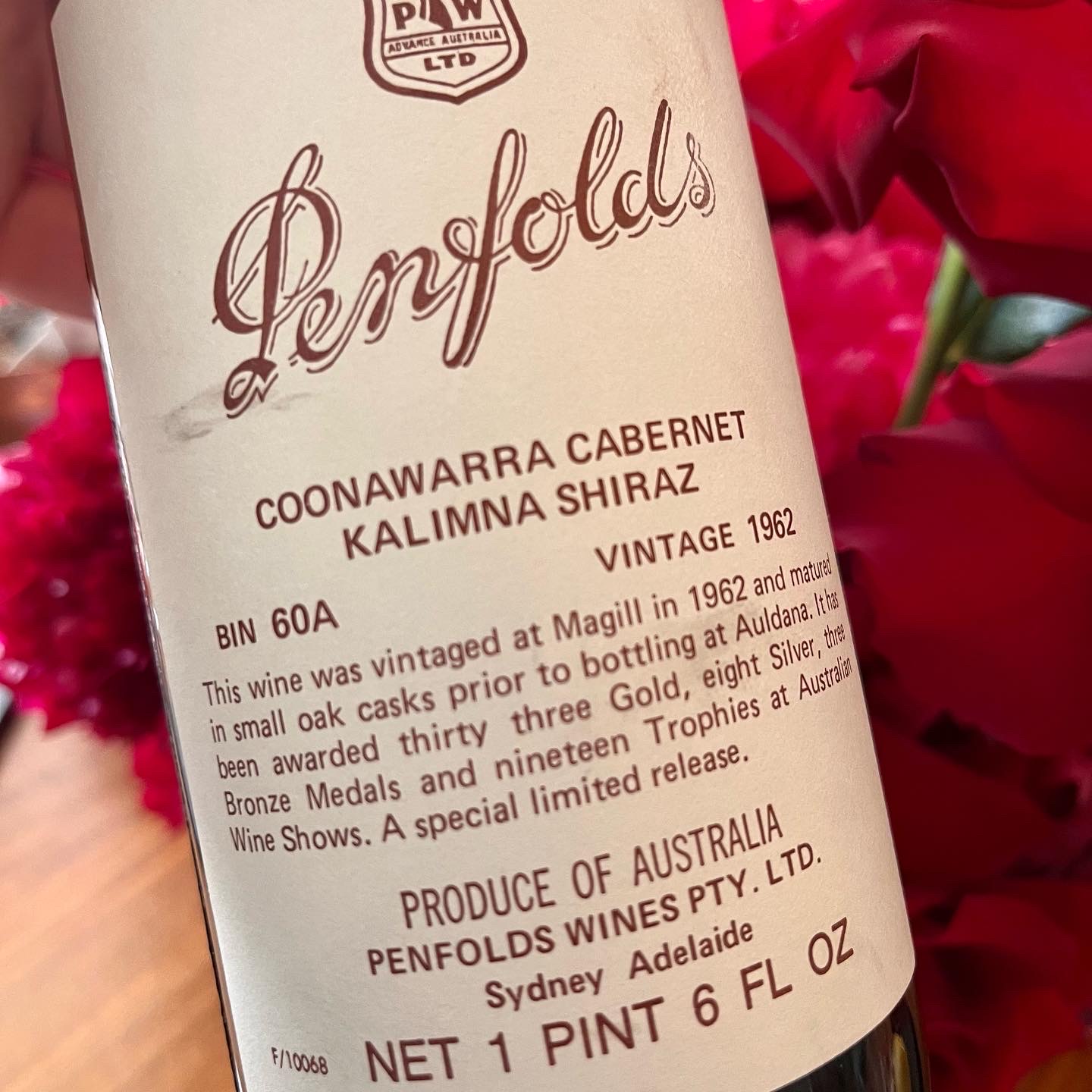 Then one of those moments that will stay in my wine memory, the 1962 Bin 60A Coonawarra Cabernet Kalimna Shiraz, a wine that was created by Max Schubert but was never commercially released. This is available on the secondary market and gets incredible prices, and is recognised as one of the finest wines made in Australia and the most rewarded. All three bottles of the 1962 opened were in perfect condition, each unique but all had that perfectly aged freshness. Cocoa, liquorice (refined), spices, tobacco, silky, leather, aged saddle, mint, eucalyptus, lambs blood juices. Hedonistic and up there with a 1947 Vina Tondonia as one of the greatest aged red wines I have ever tasted and drunk.

I thought even at this age that this wine was quite stunning, relaxed but refined, elegant but full of bright red fruits, long and lingering, vanilla and spice, textural, firm tannins but carried well by the fresh fruit; drink now or enjoy over the next few decades.

Of course no lunch with Mr Gago would be complete without some Grange …..

Penfolds Grange Bin 95 2018, yet to be released, pure and more refined on the oak, giving a confident, focused wine, clean, precise red berries, elegant and a wine to keep for a decade before starting to drink. (release price AUD $1000) 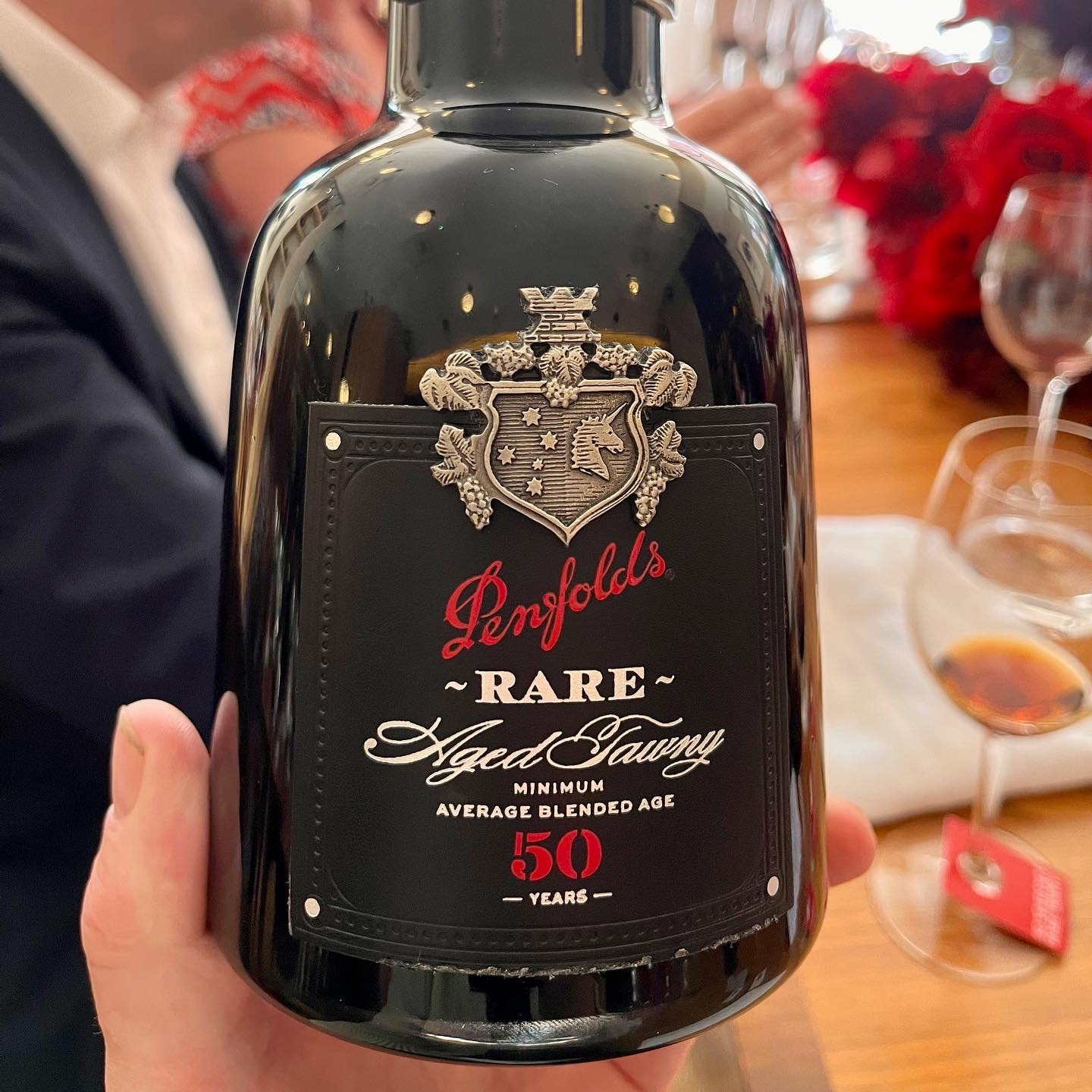 Finally we finished the afternoon with the Penfolds 50 year Old Rare Aged Tawny. This retails at £2,500 a bottle, drawn from a 50 year old solera, which contains vintages going back over 100 years; think Christmas, chocolate, dried fruits and that silky gentle heat, it oozes class, polished, delicate but deep in purity, a very ‘Rare’ treat indeed.

Penfolds, especially in the current hands of Peter Gago continues to evolve, educate and share with the world incredible wines. Famous initially for blending in Australia they have broken across the Australian state border to cross the globe in the pursuit of excellence and perfection… hold on guys this story is far from finished.