The Chocolate Block is one of South Africa’s greatest winemaking stories and, with 740,000 bottles now produced annually, it has become one of the country’s most robust premium brands. Marc Kent, the colourful MD and technical director of Boekenhoutskloof, has a particular knack of blending this wine along every one of his estate wines whose 2018 vintage has just been released to widespread acclaim. Platter’s has made the estate its winery of the year and Tim Atkin MW has given one of his rare 100 point scores to Porseleinberg 2018 and made Boekenhoutskloof winemaker Gottfried Mocke his South African winemaker of the year. Peter Dean picks up the story.

The Chocolate Block is one of South Africa’s greatest winemaking stories and, with 740,000 bottles now produced annually, it has become one of the country’s most robust premium brands. Marc Kent, the colourful MD and technical director of Boekenhoutskloof, has a particular knack of blending this wine along every one of his estate wines whose 2018 vintage has just been released to widespread acclaim. Platter’s has made the estate its winery of the year and Tim Atkin MW has given one of his rare 100 point scores to Porseleinberg 2018 and made Boekenhoutskloof winemaker Gottfried Mocke his South African winemaker of the year. Peter Dean picks up the story.

“We said that we should really do something like this back home,” Kent says, about Swartland Revolution, “someone described it as being like Woodstock without the sex.”

Tim Atkin MW is the host of today’s online tasting with Marc Kent to help launch the impressive South African 2018 vintage, to praise Kent’s 2018 Porseleinberg which Atkin has just awarded 100 points to (only his third) and to also get an insight into Kent’s style of winemaking, where South Africa is headed now that the alcohol ban has been lifted, and to ease a few priceless anecdotes out of him like Adult World.

“With the 1997 Syrah it was just pure luck – it was 4.3 PH, 100% natural fermentation, we used 20% stalks, 13% alcohol. While others were chasing the South Australian style and going for power we went for elegance. Côte-Rôtie is my reference point and I still visit there every year.”

That 1997 Syrah, which was only Kent’s second-ever wine, is still talked about as one of South Africa’s greatest reds – the lesson it taught the young winemaker was that you should start buying vineyards and not rely on bought-in fruit.

“With Boekenhoutskloof I never wanted to own vineyards but as the premium wine movement accelerated I realised we had to, to secure our own fruit,” he says.

Some of those vineyards are at Porseleinberg, a site from which he, Eben Sadie and Adi Badenhorst were all sourcing fruit from and which Kent bought in 2009; largely blue schist soil it makes outstanding Syrah, as witnessed by the 2018 single vineyard wine lauded by Atkin, but also it is a key component of Boekenhoutskloof Syrah, with fruit also sourced from Goldmine, Kent’s other property in the Swartland. The soil at Goldmine is largely brown schist which, combined with the Porseleinberg fruit, give a superb combination of minerality and breadth in the wine.

Callie Louw, considered to be the Cape’s best farmer, manages the vineyards at Porseleinberg and makes the single vineyard wine while the Syrah is made by Kent’s head winemaker Gottfried Mocke, a South African who studied in Germany and worked in France. Locke also brings with him a European sensibility that chimes with Kent’s own – an ethos rooted in French non-interventionist thinking, natural yeasts, minimal racking and impeccable vineyard work.

“Gottfried is more analytical than me although we still don’t own our own lab,” Kent says, explaining that Mocke is now using three types of Bordeaux-sourced oak barrel, has lowered the level of toast, lowered the length of the elevate from 27 to 22 months and is intent on making wines with a lower ABV.

Mocke is responsible for making the Porcupine Ridge, Wolftrap and Chocolate Block wines along with the six wines of the tasting – four wines on the Boekenhoutskloof label, and the two new Cap Maritime wines from recently acquired land in the coastal Hemel-En-Barde region.

Chocolate Block and the art of blending

Kent describes how the name Chocolate Block came from Oddbins senior buyer Tony Allen who had in return  exclusive distribution for the inaugural 2002 vintage. The concept for the blended wine came after some travels in Spain and the South of France in 2001 to look at Grenache and Syrah plantings. Where the first vintage of Chocolate Block was 15 barrels, the latest vintage is 2400 barrels which equates to 740,000 bottles.

“When people buy Chocolate Block they are buying into a brand not South Africa – which is one of the few South African brands that have done this successfully,” Kent says. “South Africa needs more of these premium volume brands.”

Kent still oversees the blending of the wine, as he does every single one of the various wines across all his labels, as well as for other wineries such as Domaine Gayda for whom he has blended its flagship Chemin du Moscou to date. Even the single varietal Boekenhoutskloof wines have other grapes blended in – Muscat d’Alexandrie with the Semillon and Cabernet Franc with the Cabernet Sauvignons.

Aside from being a ‘master blender’ Kent’s skill seems to have been ‘being in the right place at the right time’. He was working with a top wine list as a sommelier in the early 1990s just as the markets started opening up for South Africa and was at the vanguard of the revival of the South African wine scene. Together, with some of this new generation, he helped found the ‘Swartland Revolution’ which came about after attending the Hospices de Rhône event in the States.

“We said that we should really do something like this back home,” Kent says, “someone described it as being like Woodstock without the sex.”

So how are the Boekenhoutskloof 2018 wines tasting? 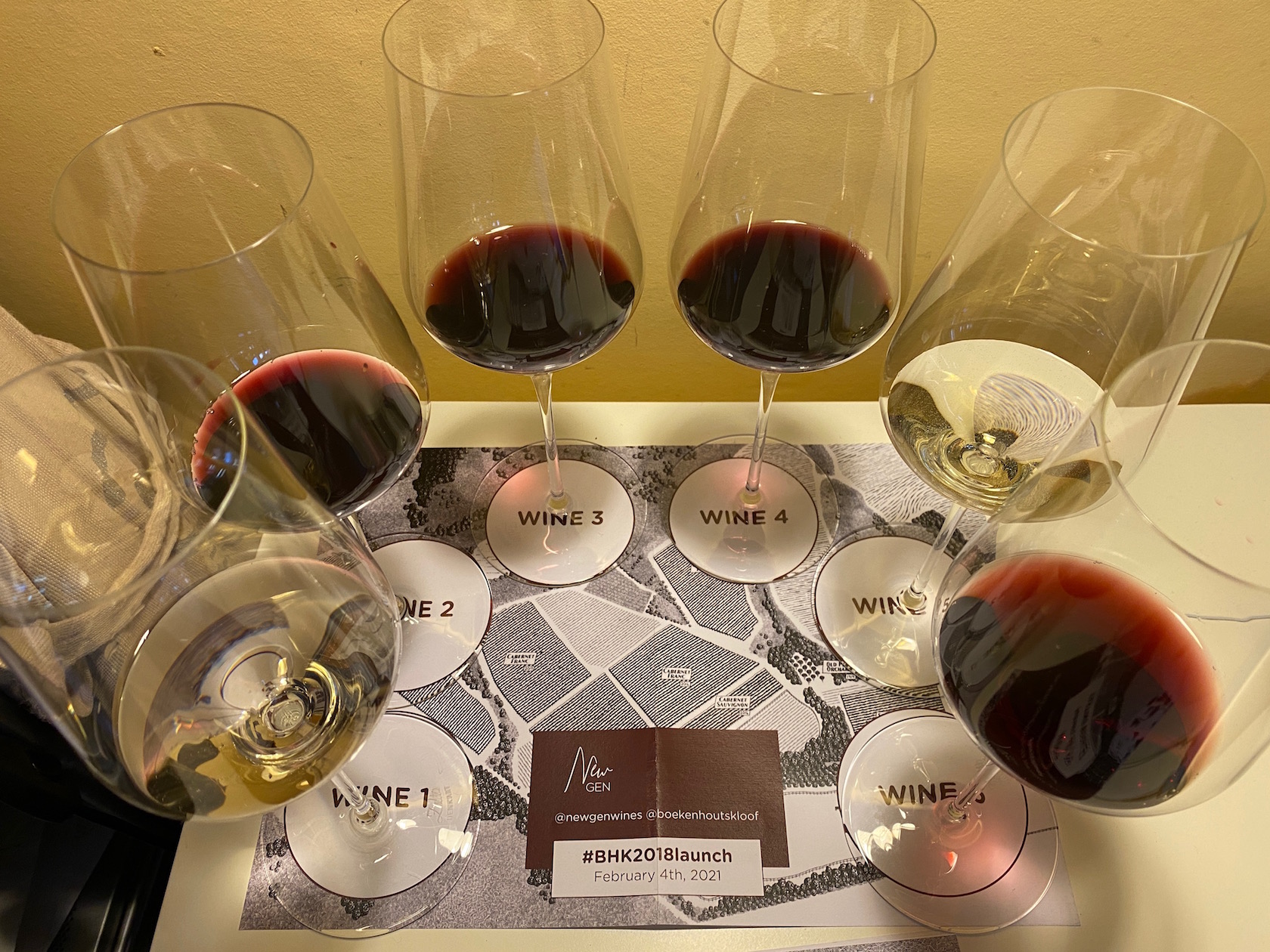 The touchpoint for this wine has always been Bordeaux whites rather than the austerity of the Hunter Valley style. Old vine Semillon from three plots in Franschhoek, one planted as far back as 1902, whole bunch pressed and fermented in 225l new French barriques (70%) and concrete eggs. The wine is matured at low temperatures with no sulphur additions for 14 months. A small addition (4%) of amphora-aged, early-picked Muscat d’Alexandrie is added for the acidity and structure rather than aromatics.

Tasting: In 2018 there is impressive complexity so young, aromatics include lanolin, dried orange peel, subtle oak; the palate is beautifully poised between racy acidity and richer, waxier mid-palate and dried herb notes. Drinking well now and always ages so well

This is the estate’s fifth Stellenbosch vintage and the third drought year on the Cape which resulted in longer hang-time for the fruit, which enhanced the fruit flavours without losing any of the acidity. 5% of Cabernet Franc was added to bring additional freshness to the cuvée. With both the estate’s Cabernet Sauvignons, the barrel-toast has been reduced and also a shorter elevage in barrel from 27 to 22 months.

Tasting: Black fruit and graphite predominates but there is also a light minty lift on the nose which enhances the elegance of this top notch Cab Sauv. The palate is precise, tense, with good structure, minerality and an elegant fruit profile, for those who like their Cab Sauv a bit plumper this may perhaps be a bit too tense for some at this stage but it should develop well over the next decade into a truly special wine.

More of the estate fruit was used in the 2018 vintage with 11% of Cabernet Franc added to bring finesse and freshness to the final blend. The barrel-toast in the traditional 225-l barrels has been reduced and also a shorter elevage in barrel from 27 to 22 months.

Tasting: With a just a little bit more heft on the nose and palate than the Stellenbosch wine, but still displaying that smart touch on the approach to the tannin, balance and overall freshness. Blackcurrant and sweet blackberry fruit predominate. More instantly approachable than the Stellenbosch wine, with a richer, deeper, more black fruit profile. 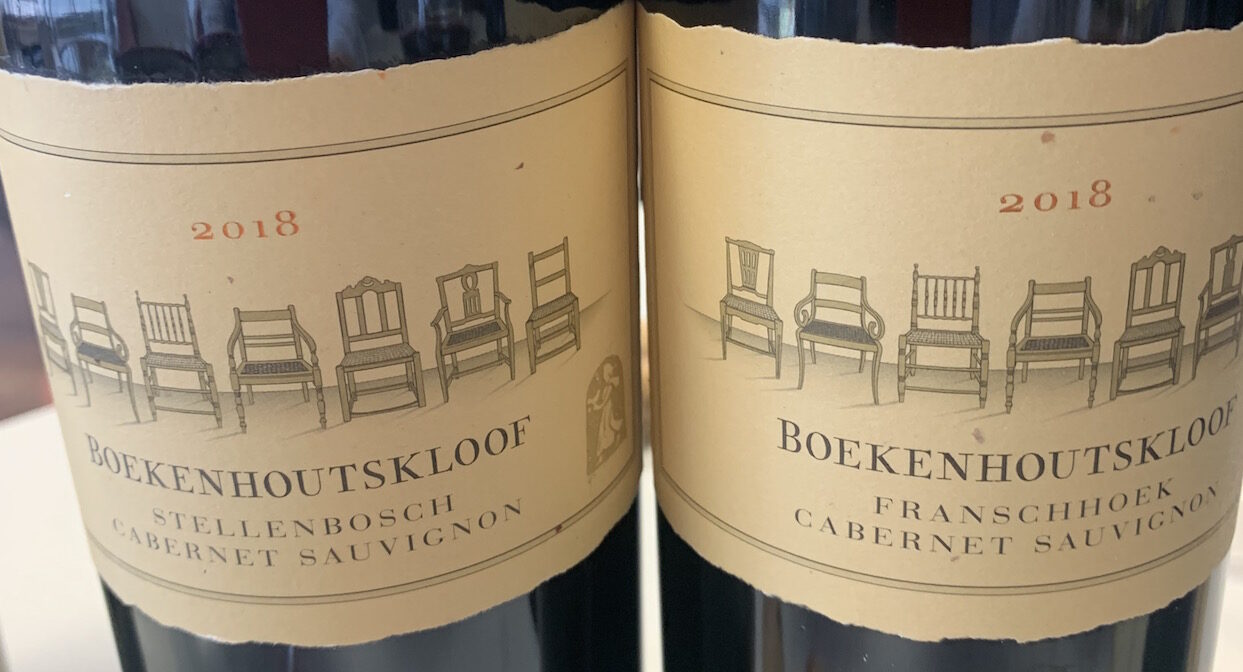 The third drought vintage was kind to the Syrah sourced from the two Swartland farms Porseleinberg (80%) and Goldmine – the fruit was healthy with less skin-to-pulp ratios resulting in lower alcohol wines with elegant, refined fruit. 40% whole-bunch fruit was used, and matured in 2500-l French oak foudres and 600l demi-muids for 18 months ageing.

Tasting: Medium purple, the wine has superb purity on the nose: plums, violets, pepper and a hint of coriander seed. The tannins are ripe and sleek, with a keen acidity. It’s still a pup but will build into an impressive wine make so mistake.

From the Hemel-en-Aarde, one of the best sites in South Africa to grow Chardonnay and Pinot Noir, this fruit used to go into Sumaridge but is now made by Mocke under the Cap Maritime label. The 2018 vintage had longer hang-time for the fruit here resulting in greater phenolic ripeness. The fruit was whole-bunch pressed, then fermented in 60% new French oak barriques and 40% concrete eggs, matured for 14 months.

From the Hemel-en-Aarde, one of the best sites in South Africa to grow Chardonnay and Pinot Noir this young vine Pinot was fermented with 50% whole bunch and aged in 50% new French oak barriques and 600-l Austrian demi-muids for elevage of up to 16 months, including a prolonged malolactic fermentation.

Tasting: Only the second vintage of this wine and picking up some impressive notices. It has a clipped, crunch and good balance with strawberry fruit and earthy notes, attractive, perfumed aromatics. It will see better days, both with this vintage and with forthcoming vintages.

Marc Almert: What the ASI’s Best Sommelier of the World did next