Krug Grande Cuvée 170th edition and Krug Rosé 26th edition – are both based on the erratic 2014 harvest which makes up 55% and 67% respectively of the two new wines. Krug chef de cave Julie Cavil explains to the IWSC’s emerging wine communicator of the year, Sophia Longhi, how the House overcame 2014’s many problems and fashioned another two monumental wines.

Krug Grande Cuvée 170th edition and Krug Rosé 26th edition – are both based on the erratic 2014 harvest which makes up 55% and 67% respectively of the two new wines. Krug chef de cave Julie Cavil explains to the IWSC’s emerging wine communicator of the year, Sophia Longhi, how the House overcame 2014’s many problems and fashioned another two monumental wines.

“The 169th, 166th, 164th, 163rd and 160th editions were also poured, providing an invaluable insight into how Krug Grande Cuvée evolves and develops in the bottle over ten years,” Longhi writes. 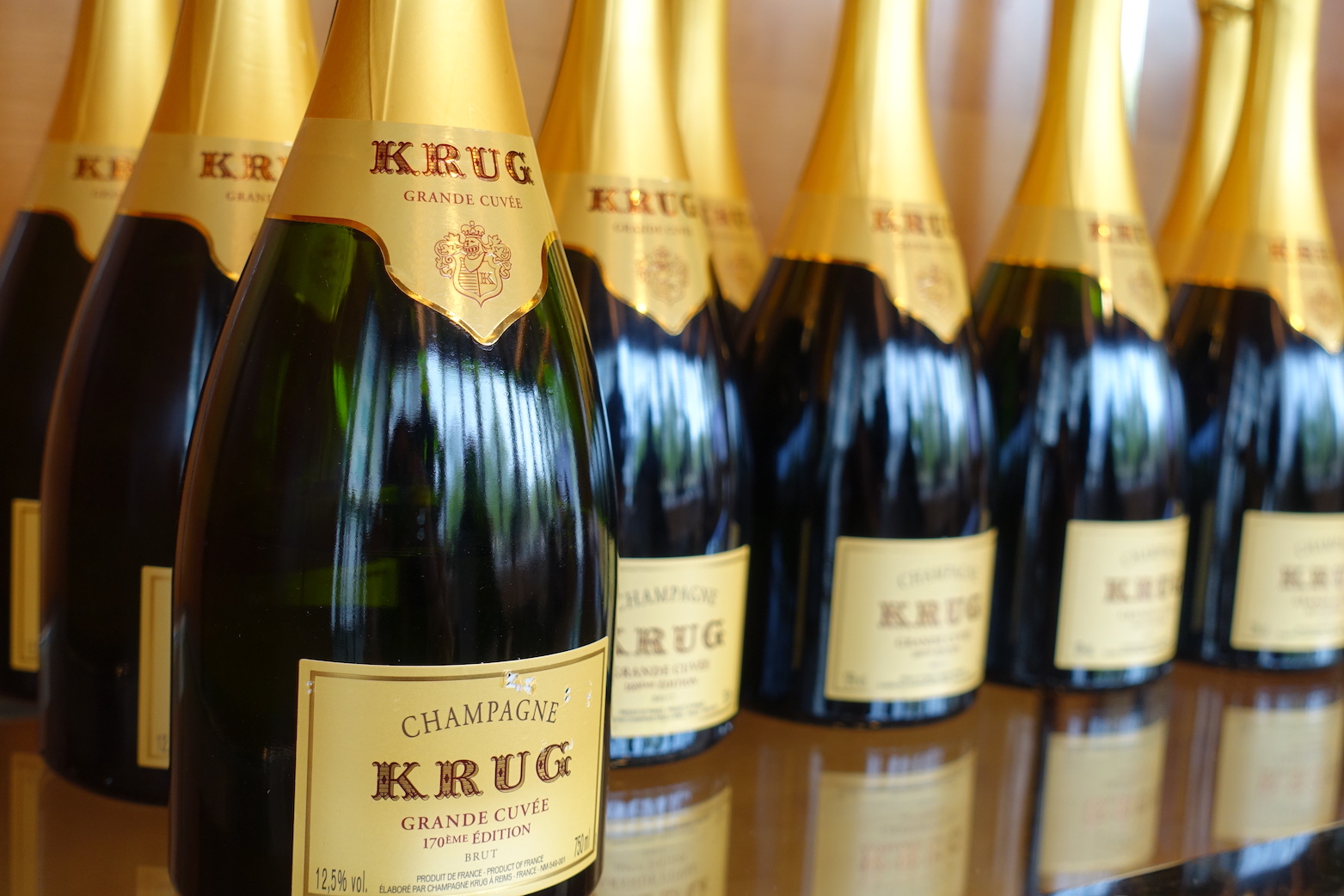 Krug Grande Cuvée 170th edition is the new baby of the family. Re-created around the harvest of 2014, there are also 195 different wines taken from 11 other years in the blend, spanning back to 1998.

2014 had a marvellous flowering in the spring and, according to Krug chef de cave, Julie Cavil, the vineyards were blessed with bountiful bunches in the summer. “There were lots of aromatics and juicy, fruity grapes,” recalls Cavil.

However, two days after this assessment in the vineyards, there was Drosophila attack. “It smelled of vinegar everywhere.”

Fortunately, nature in 2014 was generous and there were enough healthy, balanced grapes to make a spectacular 170th edition. The Chardonnay was superb and elegant, the Meunier was fruity and there was an abundance of excellent Pinot Noir.

“At the very end, it is nature that decides,” says Cavil.

There was, however, a lack of structure in the 2014 wine, so they leant on their library of reserves (45% of reserve wines make up this blend) and the 2013 reserve wine, in particular, was a big help in order to “enrich the orchestra”.

Cavil tells us that Meunier has an unusually “low share of the voice” in the 170th edition of Krug Grande Cuvée, making up 11% of the blend, and it is Pinot Noir that ‘carries the orchestra’ at 51%. 38% of pristine Chardonnay completes the rest of the blend.

“We needed 24 years to craft this edition of Grand Cuvée,” says Cavil, “and we wish a long life to this new baby.” 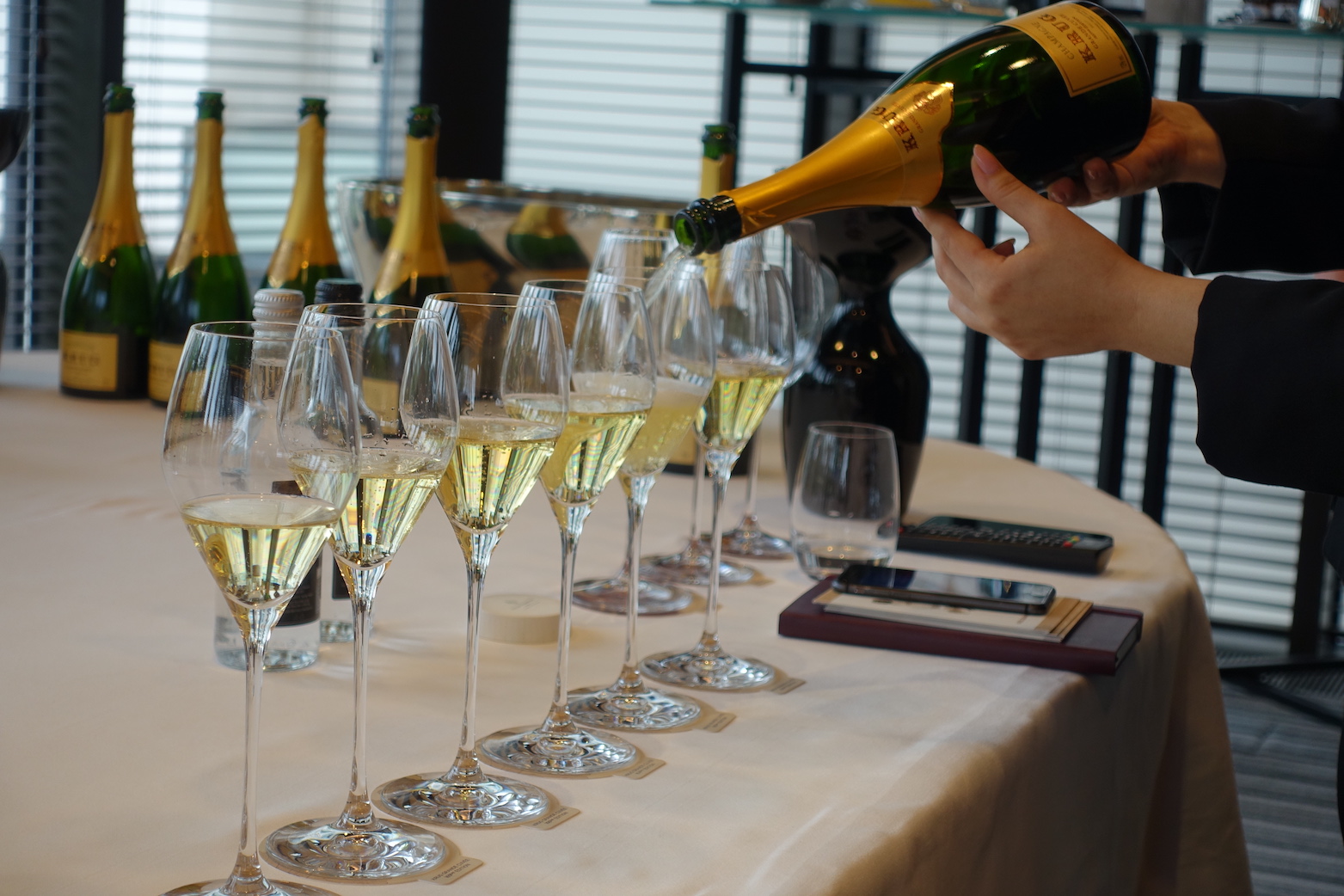 The Krug Grande Cuvée 170th edition – so named because it is the 170th time since 1844 that such a blend has been made –was the youngest in a line-up of six Grand Cuvées to taste at the Behind The Scenes tasting at Four Seasons Park Lane on Wednesday 27th April. The 169th, 166th, 164th, 163rd and 160th editions were also poured, providing an invaluable insight into how Krug Grande Cuvée evolves and develops in the bottle over ten years.

These are wines that Cavil says “are all born under different circumstances: they will all go in the same direction, but take different paths.”

Cavil observes that people will naturally describe the young editions as “too fresh” and “too young”, but “everything is in the balance”.

The privilege of being able to compare the young editions with the older ones is to “taste the evolution” of Krug Grande Cuvée and experience the wines as they become richer, toastier and creamier with each passing year. The lemony citrus notes of the 170th edition are bright and lively next to the sticky dried apricot characteristics of the 160th. “At the sixth glass, you’ll have all the flavours of a French breakfast in your mouth,” says Cavil, with a smile, “pastries, coffee, toast and marmalade.” 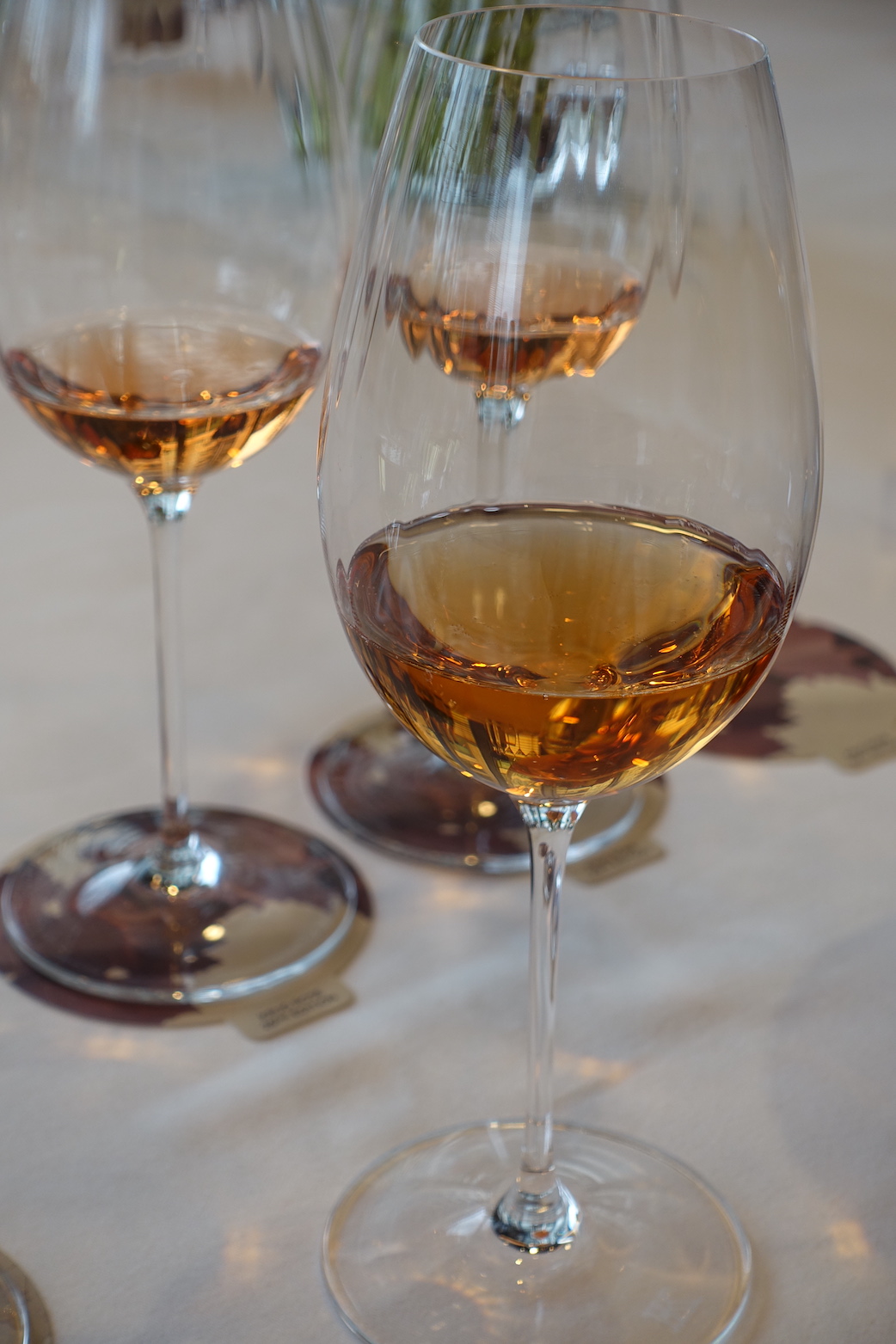 In addition to the six editions of Krug Grande Cuvée, there was also the opportunity to taste three editions of Krug Rosé, which Olivier Krug describes as “the dream of the fifth generation of the Krug family”. Krug explains that Krug Rosé is “the most difficult cuvée to create”. With only 26th released editions (the 26th was a preview at this tasting), they have less reserve wines to draw upon: “If we have less wines in the orchestra,” says Cavil, “they have bigger voices and there is no compromise at all.”

When presenting the three editions of Krug Rosé (the 26th, the 25th and the 20th), Cavil considers that they have “the same inspiration, but a different expression”. They will always look for “fruit, fruit, fruit” in a Krug Rosé, but also “structure”, “a certain restraint which provides elegance” and “a lightness to enjoy the next sip.”

Krug Rosé is made with the same philosophy as Krug Grande Cuvée, Cavil explains, “with the same backbone of freshness and the same elevation at the end of the mouth.”

The rewards of patience

Tasting a line-up of editions such as these teaches the importance of time and, as chef de cave Cavil knows well, the value of patience. “You need 20 years to craft a single bottle,” she explains, in order to experience the whole spectrum of aromas, fresh fruits, dried fruits and all of the nuances that great champagne can offer. Or, as Cavil might put it – to experience the full music of champagne.

According to Krug the Krug Grande Cuvée 170th edition has “aromas of flowers in bloom, ripe, dried citrus fruits, as well as marzipan and gingerbread, and a palate that reveals flavours of hazelnut, nougat, barley sugar, jellied and citrus fruits, almonds, brioche and honey.”

According to Krug the Krug Rosé 26th edition has “aromas of rose hips, cured ham, mulberries, redcurrant, peony, pepper and pink grapefruit and a palate that is delighted by delicate flavours of honey, citrus and dried fruit with a long finish, enhanced by its fine bubbles.”

The 170th edition of Krug Grande Cuvée is expected to be released in the UK at the end of May 2022 and it will retail at a recommended retail price of between £170 and £175.

The 26th edition of Krug Rosé is expected to be released in the UK at the end of July 2022 and it will retail at a recommended retail price of between £240 and £245.