“Our background helped us to look at Sicily from a different angle and has influenced our winemaking process. We are very, very careful around acidity and less bothered about alcohol,” says Stefano Girelli.

One of the first things Stefano Girelli mentions when he introduces himself and his wines – either by Zoom or in person – is that he comes from Trentino, in northern Italy. However Stefano and his wife Marina Girelli’s two wineries, Santa Tresa, bought in 2002 and Cortese, purchased in 2016 and in the midst of an ambitious overhaul – are not just located in Sicily, but in the very far south of that large island, near Vittoria, home to its only DOCG, Cerasuolo di Vittoria.

So just what is this northern Italian doing making wine in an area about as far south as you can get in Sicily without falling into the Mediterranean? Quite a lot, it would seem.

His first answer – after noting that this is where the ancient Greeks used to make wine – is that Sicily is the place to make wine because it’s perfect for growing organic grapes and adopting sustainable winemaking practices. And, although he hasn’t managed to go fully bio like say, Alto Adige’s Alois Lageder, he’s been applying biodynamic principles with what he says are interesting initial results that open the door to future innovation in both areas.

“This really has to be the future – we can’t just keep on spraying pesticides. I couldn’t resist Santa Tresa not just because it was organic but that with a 50 hectare site there is the possibility of producing organic wines that can compete on the international stage. Santa Tresa also has lots of different clones – we’ve used them in our wines to help create and maintain our identity, something that is key to the future,” he says.

Cortese – a 14 hectare vineyard just 8 kilometers from Santa Tresa – has been part of that identity since 2016. Blessed with very different soils but recovering from several years of neglect under previous owner Giovanna Cortese – who was 82 when she finally sold to Girelli – he has made the decision to keep the two estates separate.

“That way, we have two brothers of the same family living close to each other but with very different characters”, he says.

That becomes apparent with a tasting of the different wines produced by the two estates. Santa Tresa, originally established back in 1697, today typically produces some 300,000 bottles a year, reflecting “elegance and style” according to Girelli, whilst Cortese – where production stands at around 80,000 bottles per annum – tends towards wines with a less polished, more rustic style.

“The only wine in common is Cerasuolo di Vittoria but the Santa Tresa one is DOCG while the Cortese is Classico,” he says. 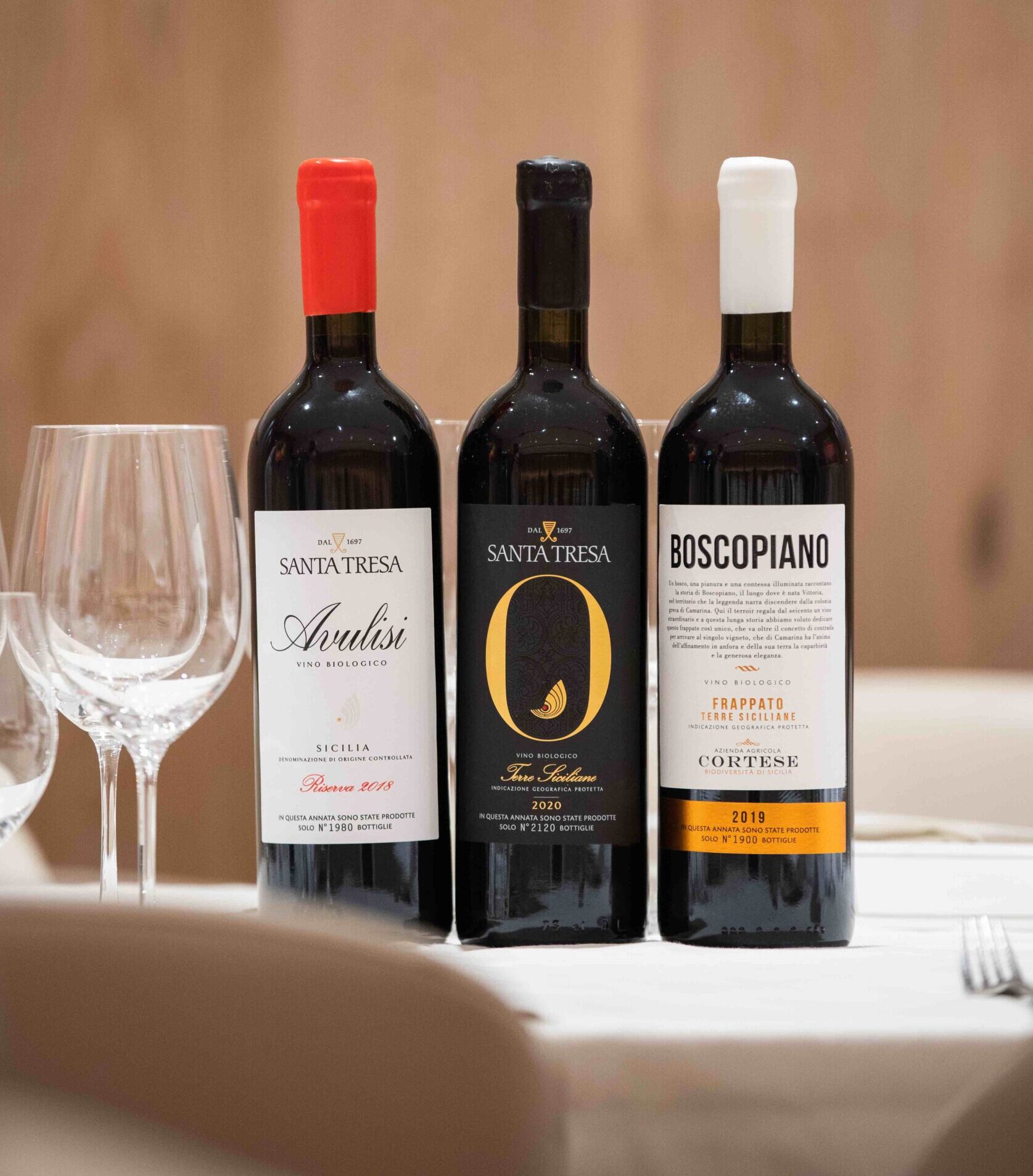 Yet these two estate ‘brothers’ have both played roles in Girelli’s latest project, a launch of three new red, low yield, very low volume wines – just 2000 bottles apiece, selling for around £50 a pop. Launched on an almost Sicilian steamy day in London in mid-June, the three very different single vineyard wines speak of the land but also, it must be said, of Girelli’s continual striving to do something different.

“The plan is to produce the wines every vintage increasing production over time, but volume will always be limited. We will not bottle if the wine doesn’t reach the quality standard we have set,” he insists.

First off, from Santa Tresa, Orisi 2020 – or O as the label describes it – a native crossing made from Mantonico Bianco and Sangiovese that Girelli carefully nurtured and bought back to life in an experimental vineyard, which he admits “took a little time to get right”. Today there are a little over 1523 vines grown on mineral-rich, sandy loam soil, with the grapes being hand-picked and fermented in medium-sized Slavonian oak barrels undergoing malo and ageing for one year before going into stainless steel for five months before bottling. The result is a distinctive wine, medium to heavy weight with dark berry and cherry flavours on the palate, quite aromatic but buoyed by lively acidity. (14% abv)

The second wine, Avulisi 2018, is a single vineyard Santa Tresa wine made from 100% Nero d’Avola vines first planted almost 60 years ago. The vineyard is famous for its red soil which give a special richness to this wine which is vinified and then aged in barrique barrels for one year, spending a further six months in bottle before release. The nose here is wonderfully expressive, lots of black cherries, spice and some chocolate, with a very warm, complex and spicy palate – as befits a Riserva – but power as well.  This dark coloured wine really will show even better with some time behind it but frankly is pretty delicious now (14%).

From Cortese, the Boscopiano 2019 is a very different beast, but again reflecting Girelli’s desire to marry tradition with modernity. Made from 100% Frappatto – one of Sicily’s most characteristic varieties – this is quite distinct from normal expressions of the variety which tend to be light, playful and quite floral. This medium-heavy wine is rather different not least because the late-picked grapes are left for a year in terracotta amphora before initial blending, then into stainless steel before the final blend is done. The result is a moreish wine with soft tannins and good fruit, quite unlike any other Frappato I have tasted, marrying elegance with character (13.5%).

Tasting through these wines, I realised that they are very different from most Sicilian wines on the market: it would seem that Stefano Girelli has imparted a Trentino-style lightness and freshness, quite different from the weightiness that characterises many wines from the hot Ragusa/Vittoria region in particular.

“Our background helped us to look at Sicily from a different angle and has influenced our winemaking process. We are very, very careful around acidity and less bothered about alcohol,” he says, adding that they have worked hard to communicate their philosophy to the people they work with, from vineyard to winery.

“One big lesson was how to deal with the extreme temperatures and manage the vineyards to bring the grapes to ideal ripeness. There is so much to learn in terms of production, culture and tradition – it is a continual process.”

Girelli says he has planted Albanello, a difficult-to-work with local white variety usually used in sweet wine which has fallen out of fashion but which he argues has good potential, although the first results will not be seen until 2024.

Yet whatever emerges from either of the two estates is sure to bear the distinctive northern Italian Girelli stamp.

What a fascinating experience it is to taste Cortese’s Nostru Carricante 2020 (13%) and the Nostru Catarratto Lucido 2020 (12.5%) alongside each other. Girelli has worked hard to give these two ancient white Sicilian varieties a modern sensibility and has succeeded with the former showing as a mineral, spritzy fruit-forward wine, lots of lychee and green apple character, the latter (Lucido is a superior clone of the Cataratto variety) more rounded, with green melon and apricot flavours showing, supporting by firm but not excessive acidity. The beautiful arty labelling on these Terre Siciliane wines should be mentioned too: the Cataratto Lucido shows a donkey, the traditional beast of burden used to transport grapes from the vineyard. Both wines very good value at around £13-14 a bottle.

Tasting Girelli’s two Cerasuolo’s alongside each other is another worthy exercise, demonstrating the different approaches Girelli has made at his two wineries to interpreting Sicily’s only DOCG, a historic blend of Nero D’ Avola and Frappato. Santa Tresa Cerasuolo di Vittoria 2019 (beautifully labelled, with a shell image illustrating Sicily’s historical evolution) is medium weight and although 60/40 Nero D’Avola/ Frappato, has a playfulness that showcases the latter variety. The red cherry richness comes from 15% of the Nero d’Avola undergoing the appassimento method, being allowed to dry on the vines before fermentation in large oak barrels/the Frappato is kept in stainless steel before both varieties age together in oak. From Cortese, the Sabuci 2017 Classico is very different, heftier in style though 13.5% against Tresa’s 14%, 70/30 Nero d’Avola/Frappato, with the former fermented in open top barriques, the latter undergoing fermentation in 7 hectolitre  terracotta amphorae. Dark cherry, forest fruits and damson on the palate, this is a rich and satisfying red meat wine.

Cortese’s Vanedda 2019 is a delicious blend of Cataratto and Grillo showing spicy tropical notes on the broad palate. Wonderful rich yellow-gold colour and a very long, evolving finish, reflecting the extended time spent on lees and time spent in bottle. Quite small volume of just 10,000 bottles.

Cortese’s Senia 2016 (13%) is a modern, moreish 100% Nero d’Avola made from hand-harvested grapes cooled in small baskets and then undergoing open top fermentation in barrels, before ageing for a year in barrel and a further six months in bottle pre-release. This is a surprisingly restrained Nero d’Avola supported by a lot of acidity and showing predominantly red fruit.

Santa Tresa works wonders with Sicily’s oft-underrated Frapatto grape using the estate’s specially developed clone. The pink Il Frappato Spumante Brut is quite delicious, made with handpicked grapes to produce a full, strawberry and tropical fruit-charged sparkler, and is apparently Italy’s only sparkling Frappato. For a more traditional take, the Rina Russa Frappato 2020 is a fine example of how this variety should be made: light red cherry flavours and raspberry notes from the estate’s red soil (Rina Russa) make this playful, medium bodied wine a summer joy, particularly when lightly chilled.

All wines available through North-South Wines.