“Almost all the wines I tasted made from Gamay and Pineaux d’Aunis were fruit-forward but nuanced with good tannins and acidity and lots of terroir-driven character  – in other words, the sorts of wines that appeal strongly to UK consumers right now,” writes Keay.

“Have you tasted around the Loire much before?” I was asked as I and 57 other international journalists gathered for dinner in Angers’ Collegiale Saint Martin, a beautifully restored medieval church in the city’s heart. It was the start of the three day Val de Loire Millésime 2022, a bi-annual wine summit organised by InterLoire, the organisation that promotes many of the 69 AOCs of the Loire Valley, so I felt I should be honest.

“Um, what I know could probably be written on the back of a postage stamp,” I replied.

Well, OK, a big postage stamp, filled with tiny spider-like writing. I knew Muscadet (made from Melon de Bourgogne) mainly from its 1980s and 1990s heyday when it was pretty much the only wine to have with oysters; I knew Chinon, Saumur and Saumur-Champigny and Bourgueil (Cabernet Franc) and, of course, Vouvray and a few other sub-regions famous for Chenin Blanc, still and sparkling. But that was about it. Not for lack of interest mind, but because of the sheer scale of the Loire, France’s longest river and its third largest AOP region by volume. The place can be intimidating to the wine writer also trying to get their head around what’s happening elsewhere in the wine world, especially when France is not one of the main countries you cover.

And the figures presented by Sylvain Naulin, CEO of InterLoire – a man who looks disconcertingly like Matteo Salvini of Italy’s Lega Nord – illustrated this point. 3,600 growers, 430 negociants, 21 cooperatives – and this is just in those areas that fall under InterLoire’s jurisdiction (Sancerre, for example, is one of those which doesn’t). Almost 60,000 hectares of vines (Chianti Classico, by comparison, has 7000, the Douro Valley 38,000) of which 65% are organic or well on the way towards it, and turnover of €1.3bn with 280m bottles sold (in 2017) make this a very big player, by any definition. And if you include outlying regions like Saint Pourcain and volcanic Côtes d’Auvergne, the Loire Valley wine region stretches over 1000 kilometers almost down to Clermont Ferrand in central France.

But the key here is the diversity, the extent of which had me asking whether the Loire is actually a cohesive wine region at all or rather a fascinating but loose collection of AOPs vaguely connected by the Loire and connecting rivers including the Maine – which runs through Angers – the Sevre, Mayenne and Sarthe. There is after all no defining grape, like say Syrah and Grenache which are grown all along the Rhône and many of the AOPs here do genuinely seem quite distinct from one another.

Indeed, there are 24 varieties produced – of which Melon de Bourgogne, Cabernet Franc, Chenin Blanc and Sauvignon Blanc are the most renowned, typically produced as varietal wines (although there are exceptions, blends are more commonly found in Cremant and sparkling). There are also some I hadn’t been expecting to find, including most notably Pinos Gris, produced as semi-sweet Malvoisie near the prime Muscadet region of Ancenis; this is an interesting, highly traditional (but I fear) rather un-commercial style as the wine world moves firmly away from high residual sugar wines.

There there is Gamay – produced in vibrant juicy red and pink styles in Coteaux-d’ancenis, just above Ancenis – and the mysterious red Pineaux d’Aunis, which grows mainly around Vendôme, north of Tours. Almost all the wines I tasted made from these two last varieties were fruit-forward but nuanced with good tannins and acidity and lots of terroir-driven character  – in other words, the sorts of wines that appeal strongly to UK consumers right now, and which deserve to be better known outside the Loire region.

Highlight wines of the trip 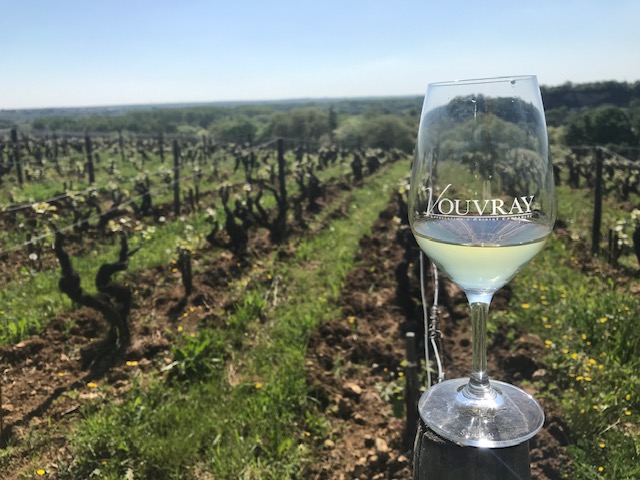 So, at the risk of old Loire hands rolling their eyes, what were the highlights for this first timer?

Well Chenin Blanc, obviously, far and away the most planted white varietal in Val de Loire and having the starring role in dry, sweet and sparkling wines. The trend here is that every year more and more producers switch across to making dry wines; regarding sparkling wines the grape has to be 100% of the wine in Vouvray and play a leading role in Crémant-de-Loire. Chenin Blanc may be just about everywhere here but I found huge differences in wine styles and quality, obviously reflecting the winemaking and the terroir, but also I suspect core markets.

Vouvray wines seemed pretty ubiquitous during our visit and the quality off them ranged from acceptable to superb, which is unsurprising given its size (2200 hectares of vines, with half of the grapes going into sparkling wine). However the biggest challenge is knowing what you are buying, particularly in terms of sweetness: there is currently no information on the bottle suggesting what you are about to drink is dry, off dry or even downright sweet. Many producers admit the region needs to follow Alsace, and put a sweetness scale onto their labels.

Historically, sweetness clearly defined the wines of Anjou Blanc but for the past 20 years – like Jerez and Douro – this region has been trying to redefine itself, moving away from the style that made its reputation, towards something frankly more modern and likely to sell. In other words, dry rather than sweet wines. Again, I tasted a wide range and made some great discoveries: Domaine de Juchepie’s Le Paradis de Juchepie 2019, made by the charismatic Eddy Oosterlinck, is a wonderfully full, nuanced wine, lots of fresh herbs and slightly saline, made from 60-year-old vines. Likewise the creamy, well-priced Domaine de la Tuffiere Ledit Vin Chenin 2019, from the Tuffiere sub-region. However too many of the wines I tasted seemed either unstable or simply rather heavy, with little consistent Anjou Blanc style discernible. A work in progress perhaps.

I had no such qualms about the wonderful wines of Savennières, although we sadly didn’t have time to visit what was like Anjou Blanc once a sweet wine region but which started its transition many decades ago. There are just 38 producers here, lying to the west of Angers and east of Ancenis, and almost all the wines I tasted were top quality, mostly organic, dry and very reflective of local soils, mainly schist and rock.

Sadly, few wines from here seem to make it to the UK but any importer considering taking some onto their list could do worse than look at Patrick Baudouin’s Bellevue 2019, a very dry but distinctive wine, lots of character with a slightly smoky finish; Domaine du Closel’s Clos du Papillon 2019, biodynamic with no sulphites made from over 75-year-old vines in schist and rock soil, with honey and beeswax; 18 months in oak has done nothing to diminish the character of this wine (though sadly just 4346 bottles of the 2019 were made) or Château d’Epire’s Le Croix Picot 2019, just nine months in oak but with a lovely saline finish.

The highlight for me though was Cabernet Franc or, to give it its historical name, Biturica (vine-growers here are at pains to stress that Cabernet Franc didn’t originate in Bordeaux but went from here to there, having originated possibly in the Basque Country), although confusingly Breton is another name traditionally used. I tasted from all nine AOCs – in both the Vin Leger and Vin Complexe styles – and found very few that were sub-standard or even average. This is a variety that delivers on pretty much all fronts and at most price points, suggesting Loire Cabernet Franc is one of the best bargains out there. It seems remarkable that there isn’t more available on the UK markets.

My favourite appellation is almost surely Saumur-Champigny, created out of the Saumur appellation in the 1930s with a USP of tuffeau soil: a soft, low density, porous limestone that defines the region and which – aside from great wine – has given birth to a growing tourist industry based around wine-tasting in the troglodyte caves where many winegrowers age and store their wine. Producers are generally small – typically under 150,000 bottles – but also organic and take bio-diversity seriously: this was the first French region to require plant cover between vines by law, and wine-growers actively encourage local wildlife.

Young wines taste pretty much as good as those with age: Château Yvonne’s La Folie 2021 had just been bottled and it almost jumped out of the bottle with freshness, oozing blackcurrant, blackberry and mulberry flavours. The 2018s by contrast had great maturity: Domaine Ratron’s Clos des Cordeliers Cuvee Prestige 2018 sold in the UK through the Wine Society was dense and velvety, a perfect food wine with lots of character.

Camilla Murray, an English winemaker at Château de Chaintres, had Vielles Vignes 2020 which was one of the best Cabernet Francs I tasted – 100% organic, with grapes coming from vines more than 60 years old.

“The wonderful thing about this grape is its versatility. The wines that you can make are incredibly diverse and really show what the terroir here can do,” she says.

So as my visit drew to a close, I asked myself again – is this really a region? In my mind the jury was still out so I put the question to Guillame Reynouard, a winemaker in Saumur and president of that AOP’s syndicate.

“What unites the Loire as a wine region? Cooperation – we are always happy to work together, especially when there are problems – and friendliness. There is none of the competition you see in other French wine regions, and that’s such a good thing,” he says.

All images taken by Peter Dean over various visits to the Loire.