Victoria Pinot Noir is arguably Australia’s finest, but there is more to the State than Mornington Peninsula and Yarra Valley as Geoffrey Dean discovered when he spent a three-week driving tour there – teasing out some of the lesser-known gems in Victoria’s vinelands. There are eight regions (aside from Mornington and Yarra) which are all producing outstanding Pinot Noir which Dean explores, highlighting the producers that may well be under most people’s radar.

Victoria Pinot Noir is arguably Australia’s finest, but there is more to the State than Mornington Peninsula and Yarra Valley as Geoffrey Dean discovered when he spent a three-week driving tour there – teasing out some of the lesser-known gems in Victoria’s vinelands. There are eight regions (aside from Mornington and Yarra) which are all producing outstanding Pinot Noir which Dean explores, highlighting the producers that may well be under most people’s radar.

“The third region of the ‘Dress Circle’ is Geelong where a formidable sextet of wineries produce some of Victoria’s best Pinots,” writes Dean.

While good quality Pinot Noir is grown in almost every wine-producing Australian state, Victoria Pinot Noir is unique in the extraordinary number of different regions where premium examples of the varietal are found. Yarra Valley and Mornington Peninsula are the most renowned, but on a recent three-week driving tour of Victoria’s winelands, as many as eight other regions came up trumps with some outstanding Pinot.

To Gippsland, Macedon Ranges and Geelong, all top-class regions for Pinot Noir, can be added Beechworth, Grampians, Phillip Island, Pyrenees and Upper Goulburn. All these regions are remarkably diverse, which is what makes Victoria perhaps the most interesting Australian state to visit for the wine connoisseur. While you can certainly strike out from Melbourne on day trips, it is well worth staying in regional centres such as Ballarat, Bendigo and Geelong. These three will be the main host towns for the 2026 Commonwealth Games along with Gippsland. 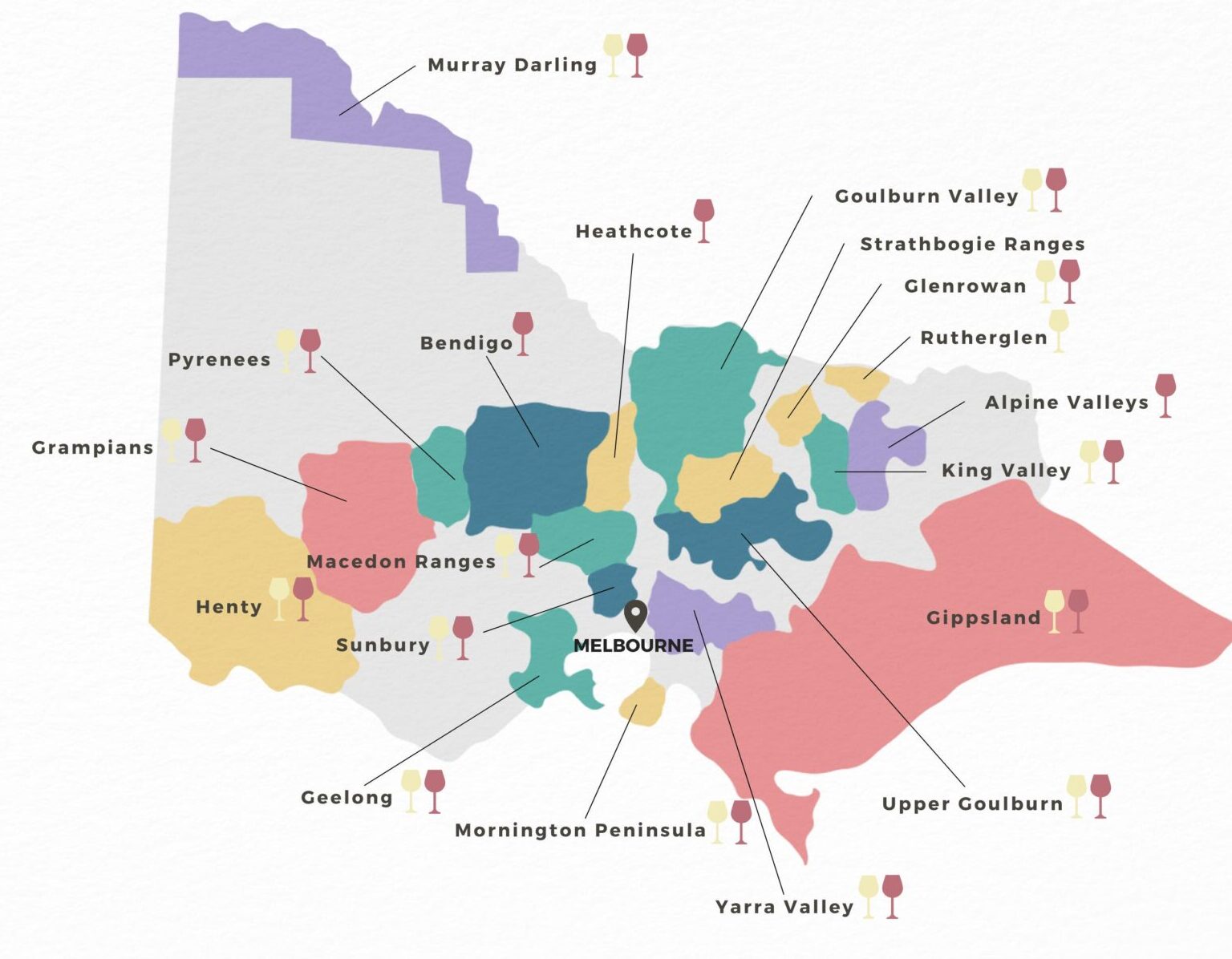 To Gippsland and back

It is in south Gippsland, a very cool climate region to the east of Melbourne, that Bass Phillip is situated. For many, this is the DRC of Aussie Pinot, being not just a world-class producer but very Burgundian in style. The French certainly covet it, with Burgundian vigneron Jean-Marie Fourrier buying it in 2020. Another Gippsland winery of grand cru standard is Narkoojee, which means ‘place of flowers’ in the Aboriginal language. Owned by the Friend family, its ‘Valerie’ Pinot Noir 2021 was suitably floral, with delicate supple tannins and seductive red fruit. It was named after its talented winemaker Axel Friend’s mother.

The drive back from Gippsland to Melbourne takes you past Cannibal Creek Vineyard, a hidden gem on granitic soils, and on to the beautiful Yarra Valley, with its plethora of top Pinot. At last year’s Australian Pinot Noir Challenge, the best of region trophy for the Yarra Valley went to Yarra Yering 2021. Fruit for this came from some of the oldest vines in the valley dating back to 1969. The pioneer who planted them was Dr Bailey Carrodus, whose 1973 vintage was the first commercial wine produced in the valley for more than 50 years.

Slightly younger vines provide what is superlative fruit for the five different single vineyard labels of Giant Steps. These can be tasted through at the winery’s homely cellar door in the town of Healesville. The Applejack Vineyard, planted in 1997 on grey clay loam at 220-320 metres, is widely considered to be one of the greatest sites for Pinot in Australia. The 2021 vintage, with its perfume, spice, silky tannins and formidable concentration, is a knockout.

No visit to the Yarra Valley is complete without a tasting at Timo Mayer. The boutique 3-hectare winery is nestled atop the splendidly-named Mt Toolebewong, eight kilometres south of Healesville. Stunning views and a warm welcome from the German-born Timo and his partner Rhonda Ferguson await those who make it there, while their Pinot, combining delicacy and depth, is a delight. Swig, the London-based importer, stocks the Mayer wines.

The temperate climate of Mornington Peninsula

From the Yarra Valley, it is an easy drive south to the Mornington Peninsula, named after the Duke of Wellington’s brother, the Earl of Mornington, who played a leading part in restricting French designs in the Australian Pacific in the early 1800s. The rich history of the region is explored in Andrew Caillard MW’s scholarly new book, published last year,  Essence of Dreams: the Story of Mornington Peninsula Wine. “Although the wine industry there can be traced back to the 1850s,” he writes, “momentum was only achieved in the 1970s when a group of idealists developed their own vineyards with the aim of making fine wine. Their collaborative efforts allowed ambitions of another age to be fully realised.”

Those pioneers – at Elgee Park,  Main Ridge,  Merricks and Stonier – were followed by Dromana and Moorooduc. “They attracted a wonderful array of new dreamers and capital investment to the region,” Caillard continues, “and established the beginning of a new great Australian wine region.”

Significantly, at the Royal Melbourne Wine Awards of 2013, a Mornington wine, Yabby Lake’s Block 1, 2012, became the first Pinot Noir to win the coveted Jimmy Watson Trophy for the best one or two-year old Australian red. A year later at the Decanter World Wine Awards, the Moorooduc McIntyre 2013 was runner-up in a global field of non-Burgundian Pinots Noirs.

While the Mornington Peninsula wine region is surrounded by three sides of water which profoundly shape its temperate climate, the Macedon Ranges to the north-west of Melbourne are cool to cold with some of Australia’s highest vineyards (up to 800m). It may be a lesser-celebrated region with an annual crush of only 2,000 tons (compared to the Yarra Valley’s 38-40,000) but it features some of the country’s finest Pinot. Two brilliant winemakers, Michael Dhillon of Bindi and Matt Harrop of Curly Flat, have established a cult following. The former’s labels are not available in the UK but the latter’s are, through Milestone Wines in Lancashire.

The Macedon Ranges and Mornington Peninsula are two of the three wine regions that encircle Melbourne and are known as the ‘dress circle’, a term coined by venerable Australian wine critic James Halliday. The third region is Geelong where a formidable sextet of wineries produce some of Victoria’s best Pinots – Bannockburn, By Farr, Clyde Park, Lethbridge, Provenance and Scotchmans Hill. All have welcoming cellar doors, with outstanding restaurants found at Provenance and at the Jack Rabbit winery, whose views from the Bellarine Peninsula across Port Phillip Bay are majestic.

Lethbridge’s vines, situated at 260-270m, are planted on basalt-derived clays in a high-grade sub-appellation called the Moorabool Valley where drainage, cool nights and soil pH are key. Bannockburn (imported by GB Wine Shippers) and Wine By Farr (Amathus Drinks) are near-neighbours of Lethbridge, whose UK distributors are Berkmann Wine Cellars.

What though of the lesser known regions in Victoria for Pinot Noir? The most obscure would have to be Phillip Island, which is sandwiched between the Mornington Peninsula and western Gippsland.  The island is home to the Purple Hen winery, which stole up on the blindside at the Victorian Wine Show in October last year to claim one of only 4 gold medals awarded. The sole Victorian Pinot producer to outscore it – by one point – was Foxeys Hangout on the Mornington Peninsula.

The state’s most westerly winery where Pinot is made is Best’s Wines in the Great Western sub-region of the Grampians. While its Pinot Noir vines are not as ancient as its Pinot Meunier ones, which date back to 1866, some are up to 50 years old. The 2021 vintage which saw 10% new oak, has lovely vibrant red fruit. “Capturing that freshness is the essence of this Pinot Noir,” said winemaker Simon Fennell.

Top Pinot fruit is actually grown even further west than the Grampians in the Henty region, although it is vinified at Best’s Wines’ neighbouring producer, Seppelt. Their Drumborg Vineyard 2020 label is outstanding, with expressive red/blue berries and rhubarb notes with supple tannins. A tour of Seppelt’s two miles of underground drives and cellars is alone worth the long journey from Melbourne. 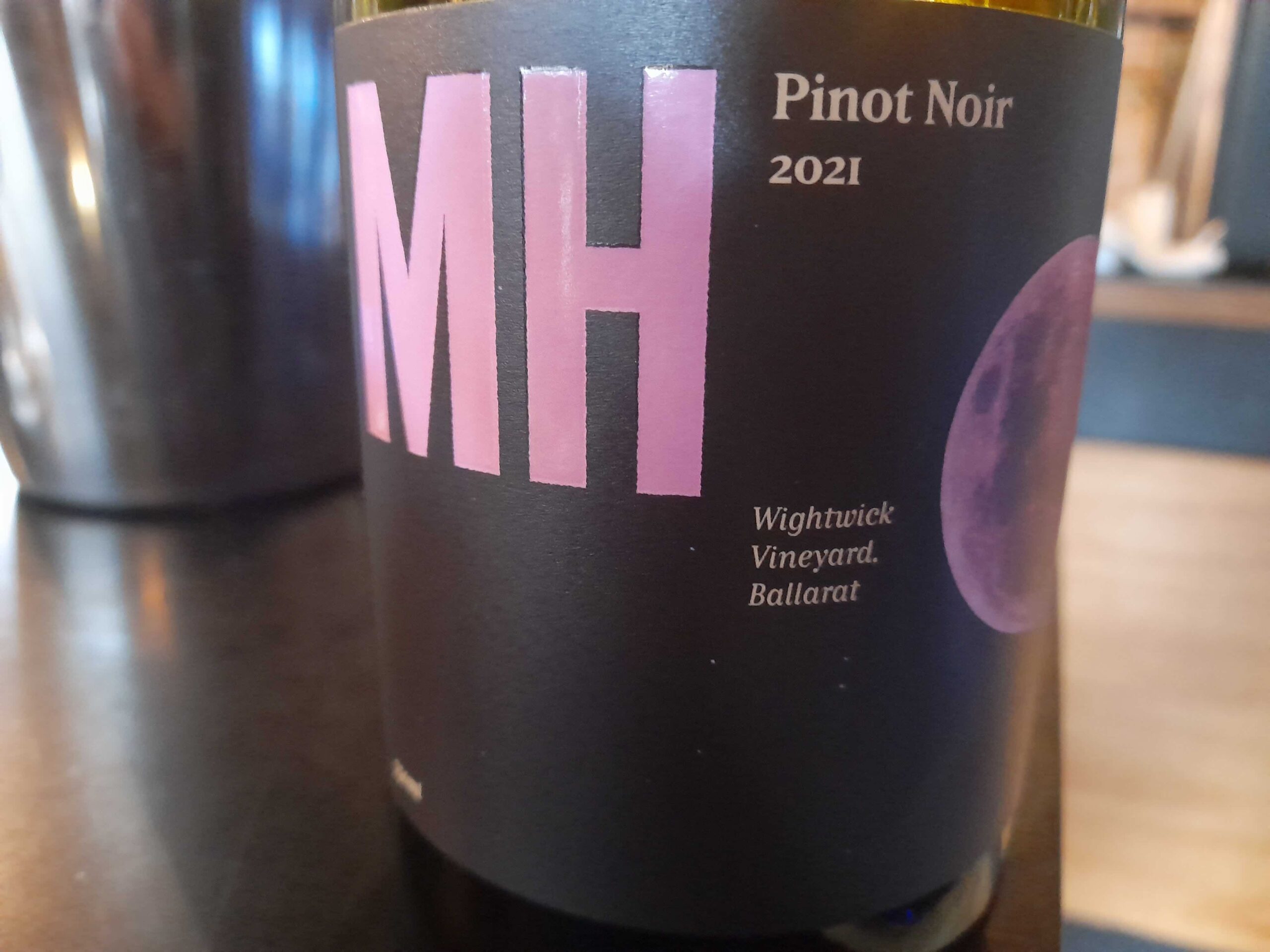 A little to the east of the Grampians is the Pyrenees region, and its capital Ballarat. There, Mitchell Harris Wines, whose 25-year old Wightwick Vineyard is a few miles from the old gold-mining town, produce a lovely 2021 Pinot Noir. Freshness comes from a pH as low as 3.3, while the lifted, floral red fruit enjoys structure from 25% new hogsheads. Winemaker John Harris gives a warm welcome to visitors to the atmospheric cellar door, a converted 1880s brick workshop in the middle of Ballarat.

To the north-east of Melbourne lie two scenic outlying regions where superb Pinot is made. Near the town of Mansfield in the Upper Goulburn region is the Delatite winery, which has stunning views from its new restaurant and cellar door over the Victorian Alps, a popular skiing destination. Despite its proximity to mountains, winemaker David Ritchie rejects the notion that Delatite is cool climate, even if summer nights are fresh. These help retain acidity in his Ritchie’s Block Pinot Noir 2021, whose vines were planted in 1976. Full-bodied and complex, this is a very classy wine, and available through GB Wine Shippers.

Last but certainly not least is the region of Beechworth, not far from the New South Wales border.  Here, Rick Kinsbrunner founded the Giaconda winery, which has achieved super-cult status for its Chardonnay. But the 75-year old sage, who spends the European summers in France, makes world-class Pinot Noir from low-yielding vines planted at 400 metres on 450-million year-old granitic loam over decomposed gravel and clay. The 2021, which I tasted ex-barrel with Rick, came from a small plot that yielded only 30 hl/ha.

“It’s the best Pinot I’ve made for years, and the closest to a real Burgundy,” Kinsbrunner purred. “Australian Pinot can lack tannins, but I love them. I used 60 to 70% whole bunch, as well as 15% new oak for a year.” Muscularly powerful yet supple with stunning fruit, this has all the makings to join the long list of great Aussie Pinots from Victoria.

Geoffrey Dean was a guest of Visit Victoria and Visit Melbourne