“Soul of a Lion 2019 is about as close to perfect as perfect can be, with tannins, acidity and fruit all in great balance,” writes Keay.

I’m going to come clean and admit that until Carson & Carnevale invited me to 67 Pall Mall to taste the 2019 vintage of Soul of a Lion, I had never heard of either this epic sounding Cabernet Sauvignon nor its perfectionist producer, Daniel Daou of DAOU Vineyards.

Possibly because I don’t often cover California, I also had outdated perceptions of Paso Robles based on my last visit there – maybe 10 years ago on a drive up Route One with my family. Back then this huge wine region (bigger than Napa and Sonoma combined) midway between Los Angeles and San Francisco was Rhône varietal country, with some Zinfandel thrown in. Bordeaux varieties were what grew further north, most famously in Napa.

As I settled down with five vintages of deep dark red Soul of a Lion to my right, Daniel Daou, speaking on Zoom from his estate on what is now dubbed Daou Mountain, put me to rights.

“People used to think Paso Robles as too hot to successfully grow Bordeaux varietals but they were wrong. It’s all about location and we found the perfect one, with limestone and clay soils and temperatures typically 5-10°C cooler than in downtown Paso, where it can reach 38°C in summer,” he says, suggesting the cooling Pacific breezes also help the vines.

Daou has been a professional winemaker for 18 years after a tumultuous life, fleeing his native Lebanon as a child with his family, moving to France – where the family hit rough times – before settling in California where he and his brother went into the IT business and made their fortunes.

But he carried a few things with him over the years including a love of Bordeaux varietals that he inherited from his beloved late father (the Soul of the Lion evokes his memory) and his time in France, and an almost extreme perfectionism and attention to detail which finds full expression in his wines.

Daou didn’t just stumble across Daou Mountain but found it after an exhaustive search that took him around much of France, California and even Italy (a site in Tuscany was almost, but not quite, right).

What was he looking for? Well, elevation of course, but soil is absolutely key in his mind, and the mix of limestone and clay at Daou Mountain seemed perfect for enabling not just good vine growth but long term sustainability.

“Four to six gallons of water per vine per week is not unusual for many vineyards; ours use four to six per vine per year, and that’s a massive difference,” he says.

And of course, taste: if the soil isn’t right Daou says “you end up with the plummy, jammy wines California is known for” whilst if the climate is too warm wines end up being “too raisiny” and cloying, emphasising how important the fundamentals are. In other words, one of the other things he bought with him from Europe was a bias towards Bordeaux style terroir and climate rather than what is more typical in California.

Today his estate – at 650m the highest in the area planted with Bordeaux varieties – comprises 280 hectares of which 81 are planted to vine, but this is set to grow dramatically; last year his new vine plantings accounted for some 4% of the total across the Golden State.

And other producers in the region are following his lead – Bordeaux plantings in Paso Robles are on a roll, accounting for over 40% of the total over the past few years. Little wonder given how well Daou’s wines have done, with past vintages of Lion earning huge plaudits that in the palate of many have elevated the wines above much longer established Cabernet Sauvignons from Napa.

“Soul of a Lion is making huge inroads amongst people who want to own and taste the best wines around,” he says, pointing out that the first vintage was 2010 and, since then, the wine has continued to build up its reputation with every vintage, the only exception being 2011 when the conditions weren’t right.

So what did I think? 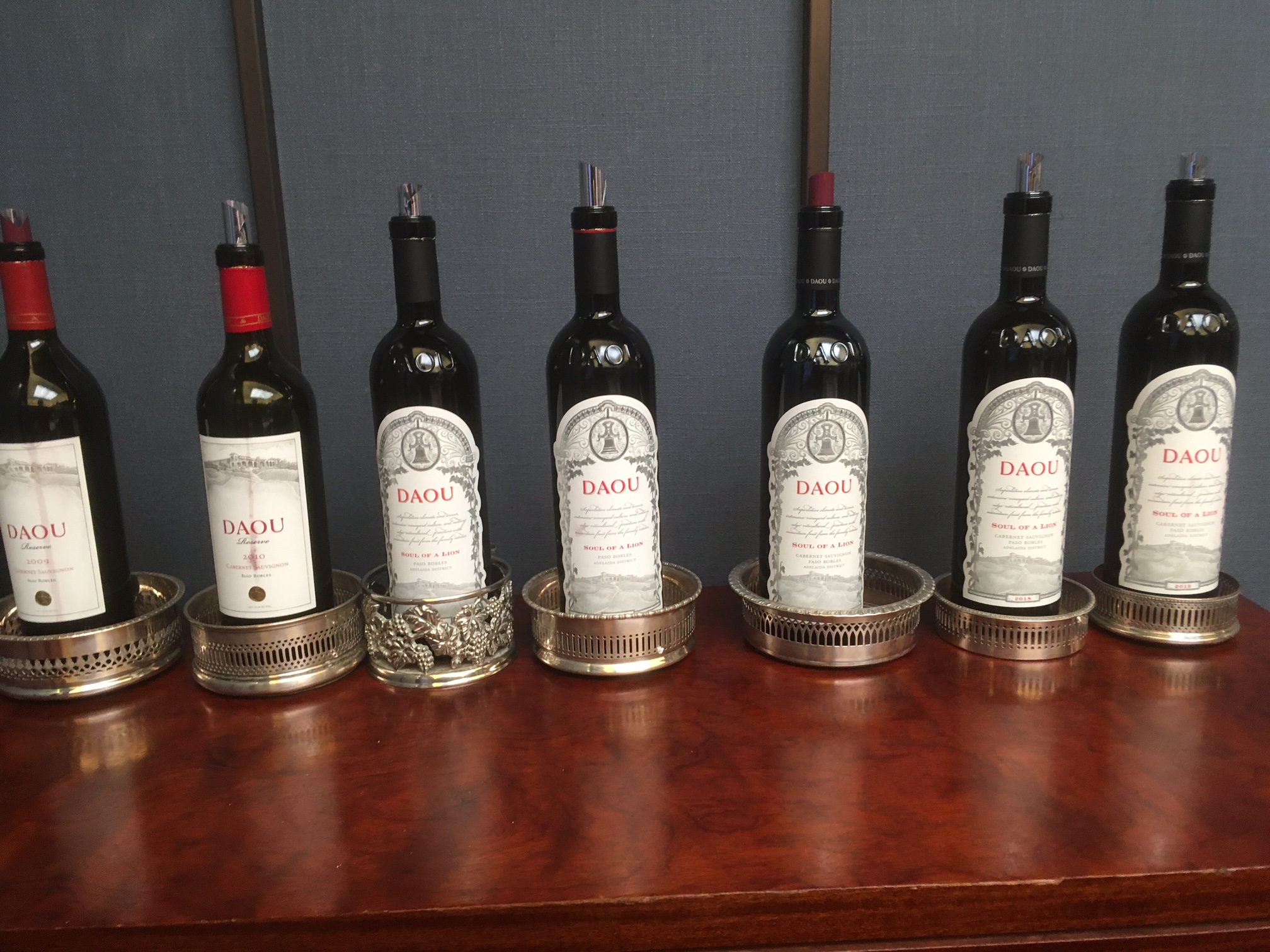 The first thing that should be said is that all the wines – even the nine-year-old 2013 – looked as if they had just been produced: deep dark red, with no signs of ageing in any of the older wines, and on first taste, all exuded a remarkable freshness that frankly you just wouldn’t find in Napa or Sonoma wines of this age. According to Daou, it all comes down to phenolics.

Before this tasting, I’d read my colleague David Kermode’s piece on Daou where he said Daou goes on about phenolics…a lot. And also about clones too and how he has chosen the correct Cabernet ones, and why this matters so much.

Today was no exception and I confess that for someone who failed his Chemistry O Level (although I blame Dr Adams, my psychopathic teacher) it was all a bit much. However, it is clear that the correct phenolic structure is key for these wines, which don’t sour or lose flavour or colour even after being open for ten days. The proper use of tannins is also vital, enabling great balance and none of that mouth puckering which can result from tasting too much California Cabernet; Daniel says he only uses skin tannins and never seed or oak tannins in his wines.

“This makes them more approachable on release and helps them age better,” he says.

This was most evident in the Soul of a Lion 2013, a remarkably youthful wine from a drought year, showing lots of cassis and sour cherries and great balance, and even more in the 2014, which Daou ranks along with the 2019 as his favourite vintage. I and others at the tasting concurred with that, there’s a distinct elegance to this wine with floral touches underlying the blackcurrant and liquorice. Daou says he was testing the phenolic structure three times a day whilst this wine was ageing and says its success reflects the importance of soft, supple tannins but also general non-interference in the winemaking.

“None of the vintages have more than 0.5g sugar and all are made naturally – this is as pure an expression of Cabernet that you can get,” he argues.

By contrast the Soul of a Lion 2017 was made in a heatwave year during which some 25% of the crop was lost, resulting in a smaller production than the typical 90,000 bottles, but a really rich, sumptuous wine, reflecting the fact the grapes weren’t picked until late October. This is delicious with lots of dark berry fruit and a long opulent finish.

Which brings us to the Soul of a Lion 2019. Weather-wise, things were pretty much spot on at Daou Mountain that year and this is reflected in the wine which is about as close to perfect as perfect can be, with tannins, acidity and fruit all in great balance.

“I have to say I’m really pleased – it just feels like everything came together,” he says, suggesting this may be his best vintage yet.

It’s worth noting that these wines are made from vines only 9-14 years old, a riposte perhaps to those who talk of the importance of old vines to making great wine but also a reflection of Daou’s almost scary perfectionism.

“The more people taste this wine (and for the past three years it has outsold just about every other high end California Cabernet) the more it is being recognised as a benchmark for Cabernet Sauvignon. In terms of price and overall tasting experience, it’s hard to beat.”

I’m not going to argue with that. These are impressive wines, quite unlike most other California Cabernets I’ve tasted and frankly all the better for it.

Soul of a Lion 2019 and other DAOU wines are imported and sold in the UK by Carson & Carnevale which is a supplier partner of The Buyer. To discover more about them click here.