For the first time in the UK a new vintage of Brunello di Montalcino was released en primeur. Benvenuto Brunello was the name given to Hunt & Speller’s exclusive London preview of the Brunello di Montalcino 2018 vintage and the 2017 Riservas, some two months before the Consorzio’s official January 1 2023 release date. Justin Keay was there for The Buyer, giving his views on the vintages as well as picking a dozen standout wines from the 115 on show.

For the first time in the UK a new vintage of Brunello di Montalcino was released en primeur. Benvenuto Brunello was the name given to Hunt & Speller’s exclusive London preview of the Brunello di Montalcino 2018 vintage and the 2017 Riservas, some two months before the Consorzio’s official January 1 2023 release date. Justin Keay was there for The Buyer, giving his views on the vintages as well as picking a dozen standout wines from the 115 on show.

“Most of all it seems to be the winemaker that matters: most wineries here are family-owned with a clear and defined vision of how their wines should be,” writes Keay about the new Brunello di Montalcino 2018 vintage.

There are tastings that you look forward to, anticipating the variety of the wines that might be shown and the informative walk-around chats with the producers who made them. And then there are those you approach with something more akin to trepidation, particularly when they are of wines made from a single variety, amidst fears you might encounter ubiquitous wines defined by teeth-bracing acidity and tough, overly chewy tannins.

I’ll admit that for me November’s Brunello di Montalcino 2018/2017 Riserva En Primeur tasting – the first ever to be held in London and also debuting in New York, LA and Toronto  – fell into the latter category, my trepidation augmented by Sangiovese’s reputation for being dry and tannic when young before evolving greater complexity and nuance.

So how would these wines turn out?

Organised by Hunt & Speller as a sommelier-served sit down affair at Westminster’s Church House, with tasters given two hour slots, time to be able typically to taste 40 wines, this inaugural tasting was a serious opportunity for the UK wine trade to become much better acquainted with Brunello.

For many, Brunello di Montalcino’s main claim to fame is that it is the most expensive expression of the Sangiovese grape – although Brunello, the “little brown one,” is actually made from Sangiovse Grosso, a large berried clone of the variety. This is a reputation that pioneer producer Biondi Santi helped reinforce with its excellent iconic wines, although much lesser known producers within the DOCG are also not shy of charging high prices for their wines.

And as the smart money has moved away from Bordeaux towards Italy, Brunello – even more perhaps than Barolo – has attracted serious investors but also ‘bling money’, with expensive Brunello increasingly deemed to be a good way of splashing the cash ostentatiously, especially in pricey restaurants. But the truth about these wines is more complex.

“For all its fame, the UK trade doesn’t really know Brunello,” says Speller, suggesting he had opted for a seated event to enable tasters to really get to know the wines. And there were quite a few – altogether 115 Brunello, Brunello Riservas and single vineyard Brunellos, from 68 producers, which is a fair chunk of the total 226 in this small 2000 hectare DOCG.

Many producer names were familiar to me, including San Polo, Sesti, Banfi and Fattoria dei Barbi, but many more were not, including most of the 20 seeking UK representation, which included such names as Beatesca, Cerbaia, La Fortuna and Scopone, many producing tiny volumes of wine.

Consorzio rules say Brunello must be aged for at least 4 years (5 for Riservas) with at least half this time in oak, and be bottled for at least 4 months before commercial release. This meant most of the wines on show here had pretty much only just gone into bottle. And whilst 2017 was seen as a hot vintage, delivering full bodied intense and complex flavours with floral notes (all characteristics augmented for longer aged Riservas) but in the end quite small volume, 2018 was a rather trickier affair with heavy September rains obliging producers to bring the harvest forward. The early word is that these wines are less concentrated, with more manageable tannins, and lots of silky elegance on the palate.

“After a torrid 2017 vintage, here come the 2018s – maybe not a vintage for laying down but one whose freshness may be wistfully remembered in years to come,” says Speller.

Given that these are all wines made of a single variety, according to strict rules, there was surprising diversity, reflecting the differing terroir of the vineyard sites, varying vine age and location (Brunello from the north of the region has a reputation for being tighter and less fleshy than from the south).

But probably most of all it seems to be the winemaker that matters: most wineries here are family-owned with a clear and defined vision of how their wines should be, allowing of course, for vintage variation. The result, even in a tasting of this size of only-just-bottled wines, was more variety and individual character than I had dared hope. 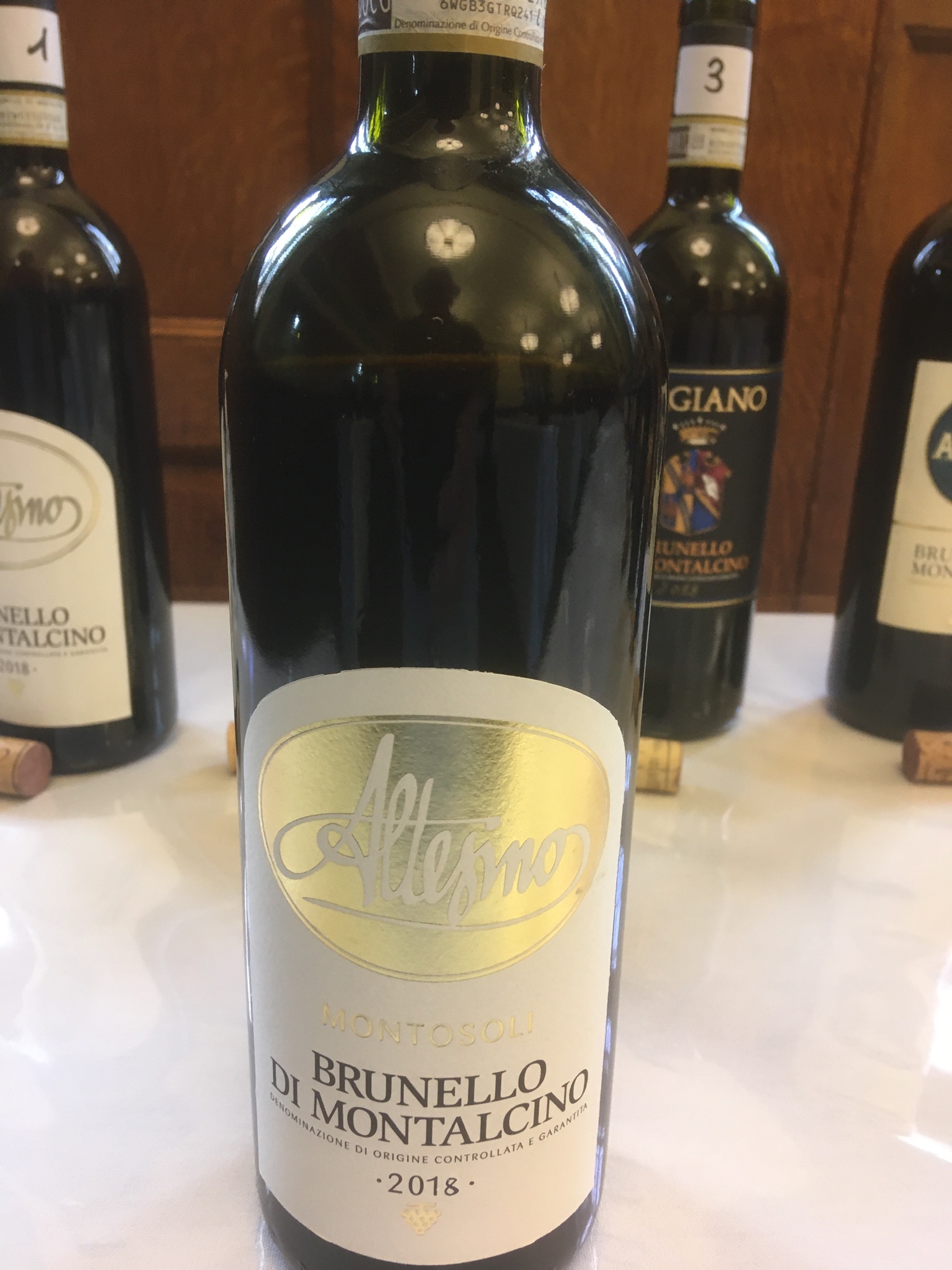 Well balanced, with lots of grip and suggestions of liquorice, sage and mint on the palate. Quite intense and full on, with 15% alcohol but this isn’t apparent. (Vinexus)

A single vineyard wine from one of Montalcino’s best known producers, this is a solid wine, quite but not excessively dry with lots of complexity. Dark berry fruit predominates here. A lot more balance than Banfi’s other SV wine, the Poggio alle Mura 2018, which showed too much dry tannin, for my taste anyway. (Louis Latour Agencies) 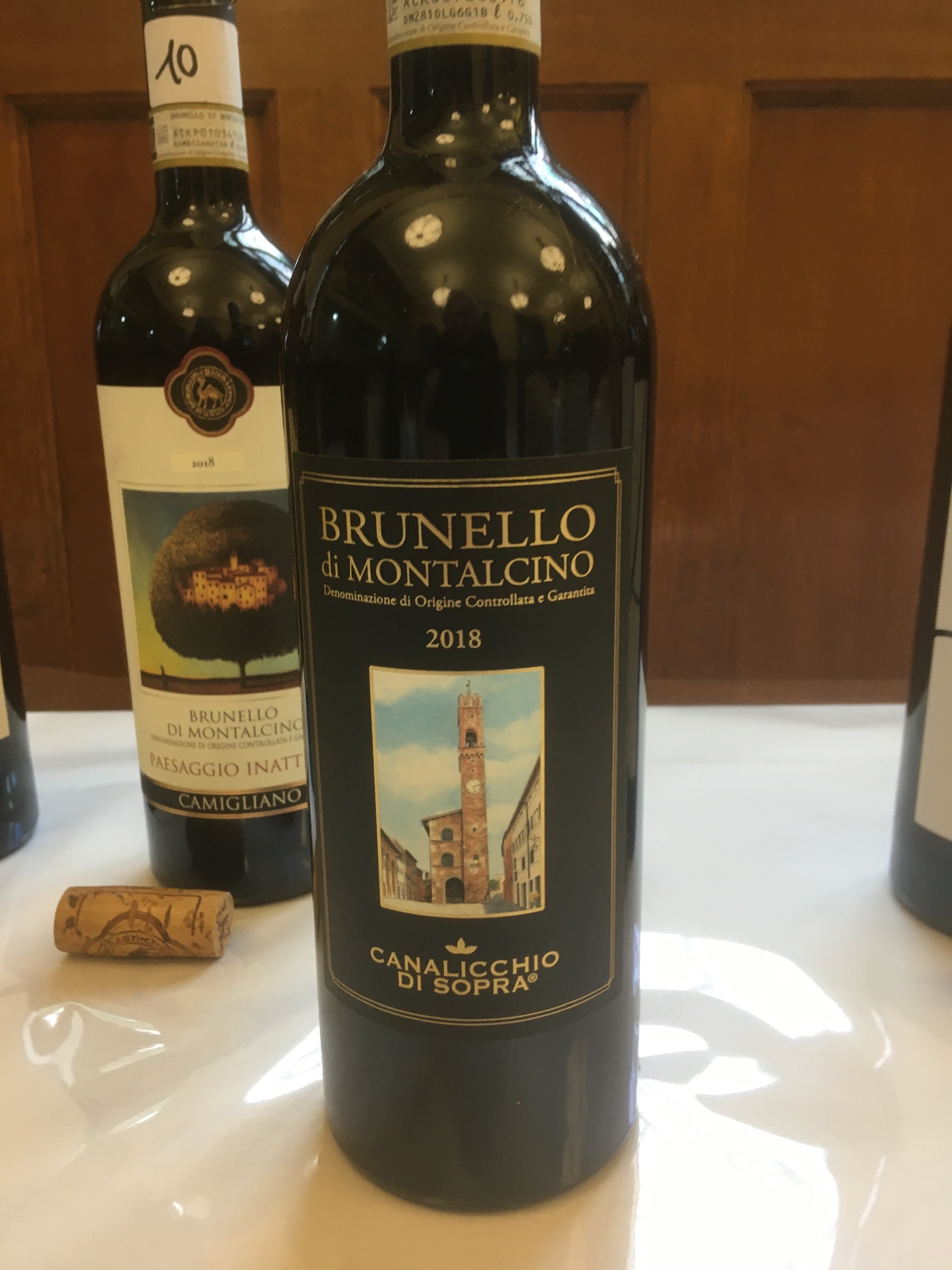 Canalicchio di Sopra – which first started producing back in the mid 1960s – was also showing two very decent SV wines but I actually preferred this multi-vineyard blend for its amazing structure and great balance. Shows a broad palate with lots of dark berry fruit, soft tannins and a long finish. Good for drinking now frankly, but will improve with age obvs. (Vinexus)

Made from grapes grown in the aptly named Paradiso vineyard, with clay and galestro soil, this is rich, full bodied, showing morello cherries and dark berry fruit on the palate, alongside suggestions of thyme and mint. Great balance and a very long finish. (HN Wines)

This wine was head and shoulders above the others – literally, because it comes in a tall, hefty bottle similar to those favoured by certain high end Argentine producers, and which scream bling. I was prepared to be biased against this wine purely on environmental grounds but had to reconsider – if you’re looking for approachable, ready to drink Brunello that’s just been released, with warm tannins and forest fruit, look no further – even if you need a mate to help you pick it up. (MMD) 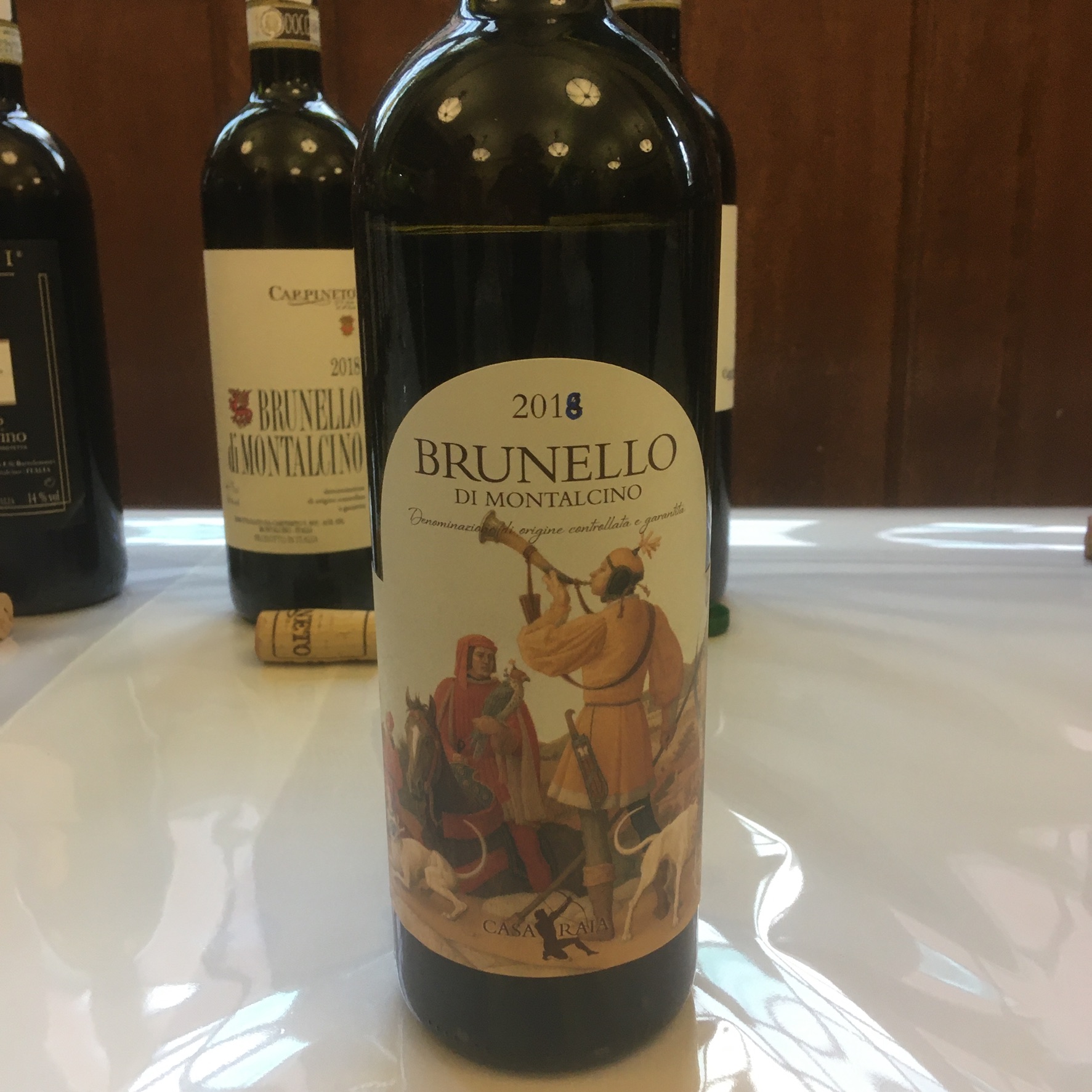 They say you can never tell a wine by its label (and how wrong is that hoary old saying?) and it was the glorious, round-the-bottle label showing a Florentine Renaissance scene that attracted me to this wine, by a producer of whom I’d never heard. Tiny production apparently, but a lovely, well balanced wine showing lots of character and flavours including black cherry and blackberry on a warm, generous palate. Elegant. (Looking for representation)

According to my notes, Barbi made its first wine back in 1892 (way back before Brunello di Montalcino became a Doc in 1966 or a DOCG in 1980) and the three wines it showed all screamed history. The Riserva 2017 and the Vigna del Fiore SV 2018 were both pretty impressive, though obviously too young, but this multi-vineyard Brunello was firing on all fours; very textured and complex, showing dark and red berry fruit with a long moreish liquorice and tobacco finish. (Enotria & Coe)

Amongst the Riservas I tasted, this had the most power and structure – and lots of alcohol – 15% – to support it. Good balance with lots of character. (Looking for representation) 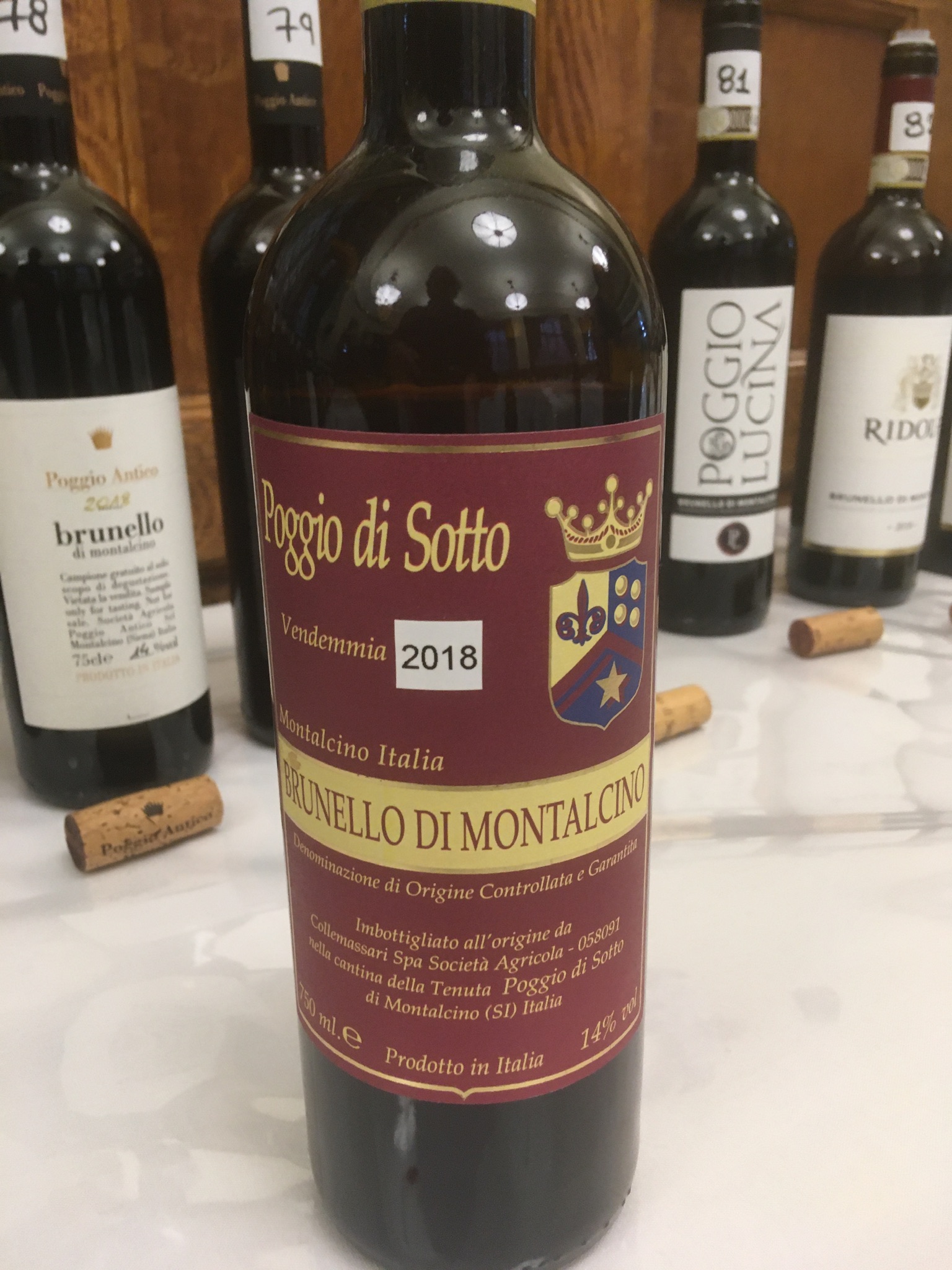 A few days before this tasting, Poggio di Soto’s importers J&B had held a tasting of earlier vintages including a very solid Brunello 2017 and the spectacular, mega pricey Riserva 2016, so I approached the 2018 with some caution – but, hey, quality always shows through and this 2018 is spectacular, despite its youth and the difficulties of the vintage. Very well made, showing great complexity and age-worthiness, and wonderful textures, this is pure class. (Justerinis).

The gamey, strong flavours of this Riserva almost jumped out of the bottle and showed a dazzling array of flavours and superb structure. But here’s the bad news – the Teatro vineyard from which this delicious wine come is less than a hectare which means tiny amounts of this wine are made, and it is one of the more expensive Brunellos. But then, you get what you pay for, eh? (Goedhuis & Co)

This, along with SP’s other SV wine, the Vignavecchia 2018, were amongst my favourite SV wines of the tasting. This has lots of earthiness and tobacco on the palate, but also a long, elegant, fragrant finish. Very appealing and likely to become more so. (Liberty Wines) 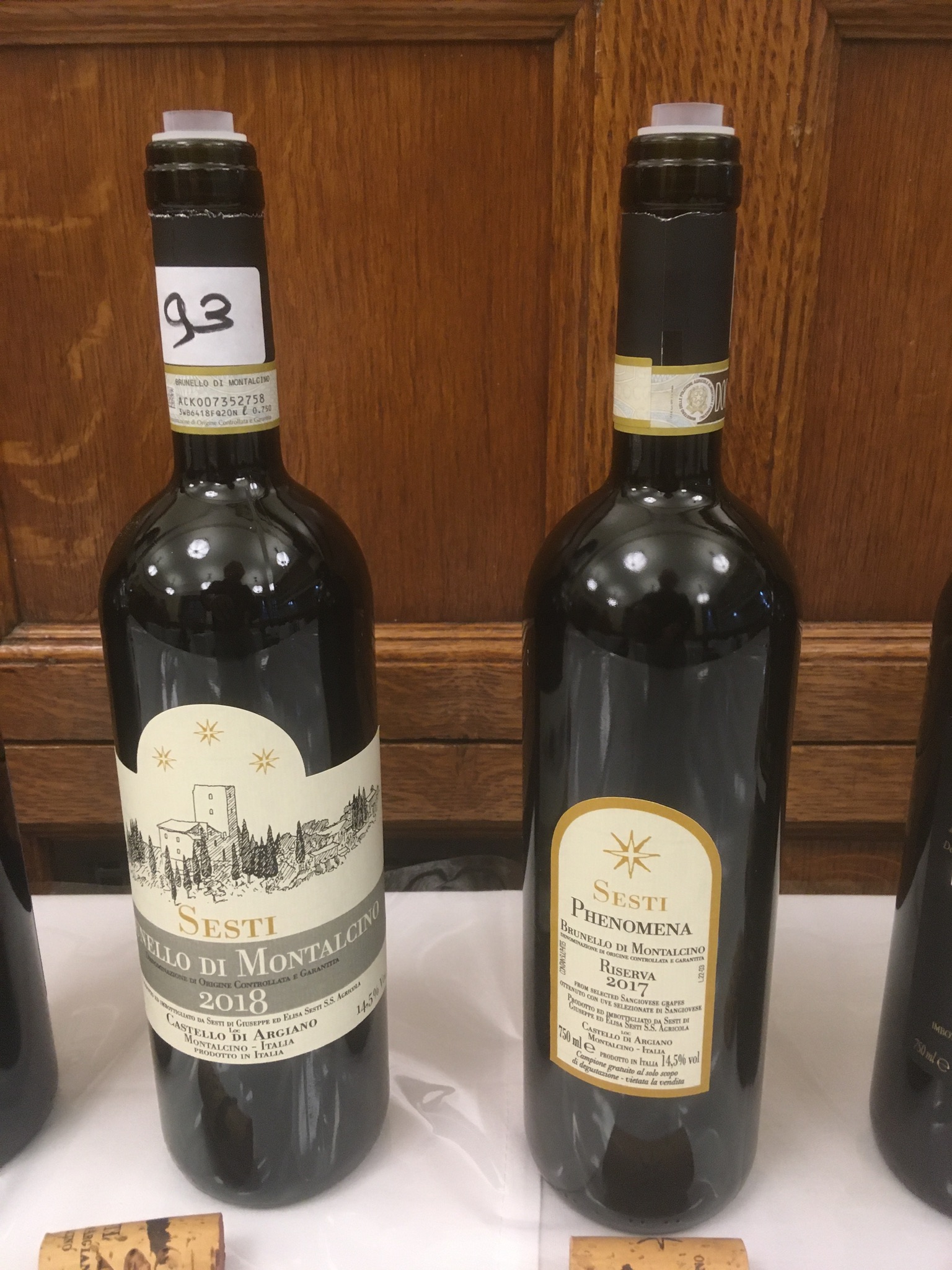 Another stunner, this has cardamom and tobacco on the attack but then shows elegance and some floral notes in a complex, structured style. Really rather marvellous, the name of this famous Riserva pretty much says it all.(Several importers)