Isle of Harris Gin is not the only gin on the market to use seaweed as a botanical but a bright future lies ahead for both this new spirit and the Isle of Harris that needs all the new investment it can get.

The first sign I have in the morning that I was ‘one over the eight’ the night before is that by the time my eyelids have creaked open, I am already halfway through writing a review of the evening’s events. Like the hastily scribbled note of a departing loved one.

Another sign is that on the night itself my eyelids start reasoning with my addled brain that Basingstoke, Bournemouth or Brighton are actually far better train destinations than Wandsworth. Because they involve sleep.

Rule number one was made on the day after the launch of Portobello Road’s new distillery, or the Portobello Road New Distillery Launch Night Massacre as it will always be known in my family, and referred to by my lawyer.

Rule number two was made after the London launch of Isle of Harris Gin. Last night.

After three hours of tasting Greek red wine the thought of an ice cold G and T dancing across my wrinkled tongue, a mere 15 minutes walk away, was a no-brainer. It was going to happen.

But the warning signs were plainly there….

This is the only launch I have attended where there was a Terror alert on the way in. ‘Heightened’ read the sign.

Scotland House, 58 Victoria Embankment – the launch venue – was cunningly hidden, not located in-between 56 and 60 as you might imagine but in-between numbers 50 and 56.

And, because the distillers throw away the heads and tails, they are creating a 45% proof liquid that they like to drink neat or, by the judge of the welcome G and Ts, with very little tonic water in. It is very pure to be fair.

Our hosts, Isle of Harris Distillers, were launching a new gin, in a new venue (opened the previous week by Scotland’s first minister), with a new brand ambassador and with clearly new technical equipment.

What could go wrong.

“I’ve seen this happen to Bill Gates!” quipped a guest as managing director Simon Erlanger stood there in front a bank of non-functioning screens.

The lady at the controls, dressed exactly like a forces sweetheart, except for one arm completely covered in tats, was showing all the signs of someone in a Heightened state of terror.

Luckily the screen saver of the PC showed nothing worse than a giant gleaming motorbike.

The film about the Isle of Harris, that looked like the opening credits of Father Ted, was never going to work and neither was one screen of the video wall that stood out like a missing tooth.

This was turning into a fabulous evening, almost as surreal as the whisky lunch I had where someone turned up passing themselves off as me. Why they’d want to do that is anyone’s guess!

Bravely and gamely, Simon stood on the burning deck and told us about the Isle of Harris and about the gin he is making there and the whisky they are also making there which will be released soon.

“We are the only legal distiller on the Isle of Harris and only the second in the Outer Hebrides,” he began.

We were told how he was approached to set up the distillers and with an investment of £11m build it from scratch, not far from where you depart the ferry from the mainland.

Harris is where the tweed comes from and not much else which is why if you are a Hearach (inhabitant of Harris) turning 18 you tend to get on self-same ferry and seek a livelihood on the mainland. This probably explains why they built the distillery so close to the jetty to help prevent the exodus – two of the 19 people currently employed by the distillery are school leavers with that number planned to increase as and when the spirit takes off.

And take off it will.

For standing there amidst the evening’s glitches was Isle of Harris Gin.

Having a deep affection for The Botanist from Islay I had to be convinced that this new gin from Scotland really had a point of difference… but it clearly has. 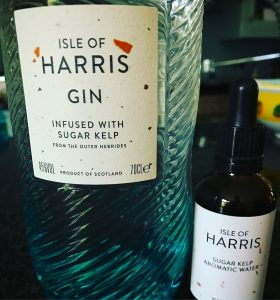 Harvested from the sea around Harris the sugar kelp gives the gin a sweet and salty savoury note that is as distinctive as it is delicious.

And just to show us how delicious this gin is, drinks consultant Douglas Blyde (eschewing the spirits measure for free-pour) was on hand to mix Martinis which we then had to better by making our own.

Fast forward one hour and the baddie from Tin Tin leaned across to me and said in a broad, slightly aggressive Scottish accent “If they serve neat spirits it’s just asking for trouble.”

By now everyone seemed to be Scottish, including myself, except Douglas of course who stayed resolutely English throughout.  With not a button out of place. The whole evening. Bastard.

We had maybe six Martinis on the go, one which had about 3 whole chillies mashed up in, one which had just one, and one which my team had made before we drank Martinis number 2, 3, 4… you get the picture.

This one was actually quite nice and was made with a few drops of sugar kelp aromatised water, a smear of caper around the glass and Isle of Harris Gin.

Douglas duly awarded our team the prize of best made Martini, even though of course he knew that his was easily the best. His smile said at least.

“What’s it called Mr Dean?” (he is frightfully formal)

Isle of Harris Gin is currently available with the whisky promised soon. Other seaweed gins available include Ocean Sent from Shetland Reel that is made from bladderwrack seaweed and Dà Mhìle seaweed gin from Wales.