“As the UK trade looks forward to welcoming the traditional styling of Leiper’s Fork, Lee Kennedy looks toward the future with one foot in the past,” writes Robert Mason.

In Tennessee there is a renaissance brewing amongst its distillers. One which is steeped in history: small, authentically hand-crafted grain-to-glass whiskey.

One such producer is Leiper’s Fork, now entering the UK in its first market outside of its home state. Proprietor & chief distiller Lee Kennedy is showcasing premium, pre-prohibition, artisanal production by distilling history with his “Bottled in Bond” range.

Prior to the Tennessee state-law change of 2009, only three US counties, where the big boy grain distillers still hold dominion, were permitted to make spirits. Now, around 44 counties, including Williamson County where Leiper’s Fork resides, are beginning to boom. And the UK whiskey drinker is key to this revival. As Kennedy puts it: “Historically, Tennessee has been seen as one of the four main whiskey regions of the world, along with Kentucky, Ireland and Scotland. We understand that we have a direct lineage to the UK through our whiskey.” The importance of reaching out to the UK market first, is yet another way to link to heritage.

In 2016, Kennedy filled his first barrel of what would become Leiper’s Fork after devoting 15 years of his life to perfecting the art of distillation. From conception to completion, the emphasis has always been to produce by hand and with a detailed, focused eye. “We are a team of 15 and do almost everything by hand,” Kennedy emphasises.

Just 25,000 gallons are made each year from home-grown local heritage varieties of corn, wheat, rye and barley. Rather unusually, the grain bill for each whiskey produced contains a percentage of locally malted and toasted barley. And, perhaps the most distinct of USPs is the old technique of sweet mashing. By deliberately not adding an acidic back-set to the mash, the natural sweetness enhances the mellow character of the final spirit. Leiper’s Fork are amongst just a handful of distillers employing this technique across the whole of the USA.

Low production volumes tend to have large benefits for the environment. Typically, mass produced spirits use continuous distillation which consume vast quantities of energy. By dedicating production to traditional methods, by cooking the mash at lower temperatures and by exclusively using the Scottish swan-neck pot still, Kennedy is able to reduce the carbon footprint of the business. “We are hoping to be fully sustainable”, he says, adding: “Despite having our own well, we are looking into recycling rainwater, [and we are] currently recycling our spent organic matter to be used in silage.” 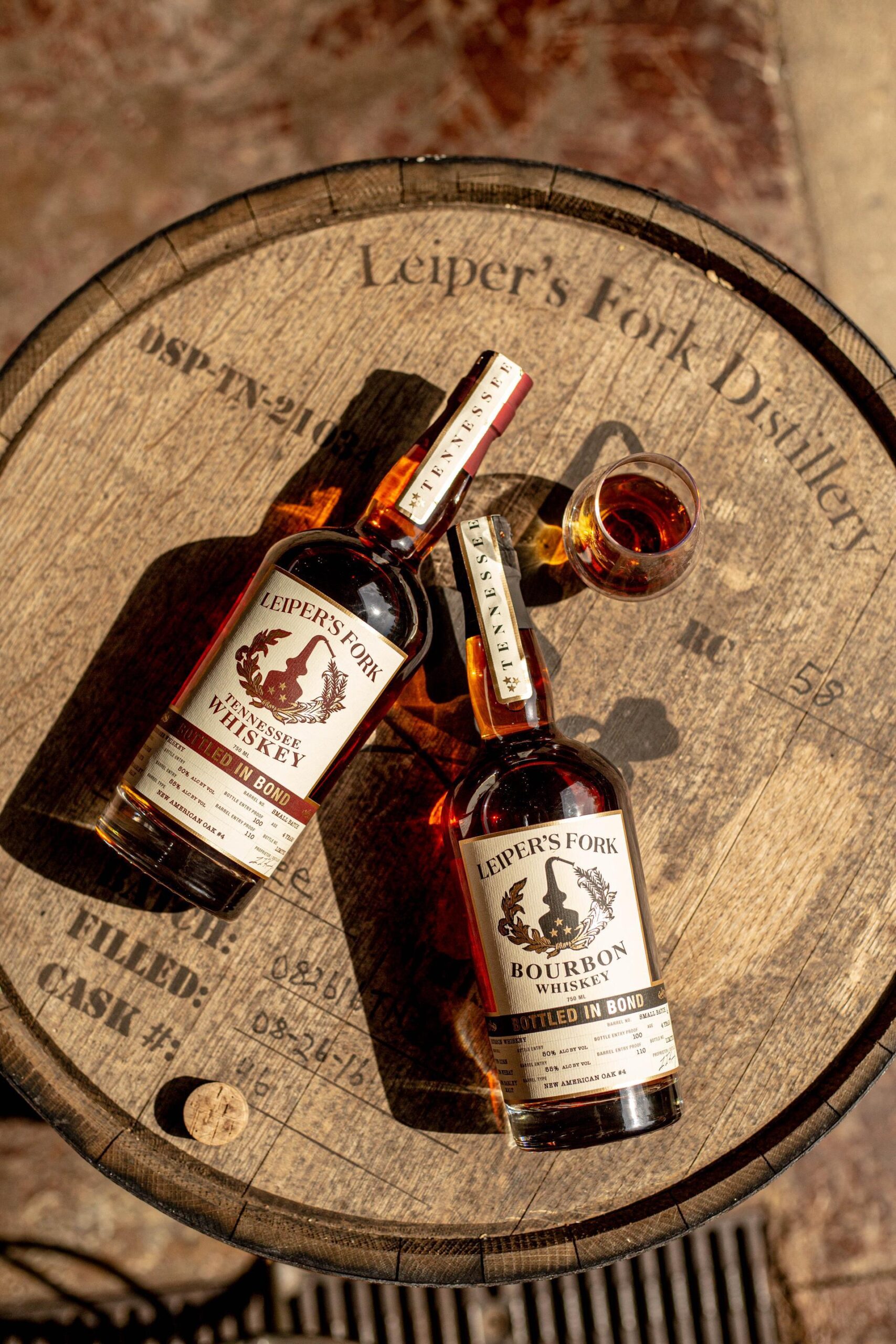 I had the rare privilege to taste both the Tennessee Whiskey and Bourbon from the “Bottled in Bond” range. ‘Bottled in Bond’ was the first Consumer Protection Act (1897) to guarantee whiskey be produced and bottled in-house. Governing each bottling to be conducted at one distillery, from one harvest, 100% proof and a minimum ageing of four years in cask. It is a clear statement from Kennedy to the provenance of Leiper’s Fork whiskeys. Standing firm to pre-prohibition techniques, Kennedy’s clear vision has been to pot-distil to the much lower legal limit proof of pre-prohibition than today’s standards and deliberately to be non-chill filtered. All these choices lead to more harmony and complexity in the glass, and are a real homage to history.

It is no wonder both these premium spirits are a cut above the rest with each displaying well-defined and complex aroma profiles. The Bourbon is, as expected: pronounced deep toffee, orange peel and spice. Whereas the Tennessee Whiskey is heady in its floral tones and shows a caramel, dark cocoa bean note alongside juicy tropical and cherry fruits.

The sweet mashing really does show on the palate of both 50% abv liquids, providing a real silky smoothness. The Tennessee Whiskey is mellow and fruity with a gentle cereal richness. Ideal neat. The Bourbon is very characterful, showing opulent spice, toast and lashings of dark cherry. It would certainly make a decadent Old Fashioned!

I met with both proprietors, Lee and Lynlee Kennedy, and brand development director, Mackenzie Reagan, alongside the team at Pol Roger Portfolio at the Soho Whisky Club. Leiper’s Fork is the first American whiskey agency represented by Pol and, after less than a week since Pol agreed to take on Leiper’s Fork, it was clear to see a special relationship has already been forged.

“We were attracted by the brand and the story. The whiskey is hand-made to a premium standard – it is low volume, high quality” describes Tim Webster, business development executive at Pol Roger. He then simply stated: “Leiper’s Fork is the right brand.” His sentiment is shared by Lee Kennedy, “for us, it is about relationship building [with Pol Roger], we share the principle of ‘quality over quantity’.”

As the UK trade looks forward to welcoming the traditional styling of Leiper’s Fork, Kennedy looks toward the future with one foot in the past. “I have selected a few special barrels which I call ‘cru casks’, destined for longer ageing and to be left [for now] untouched”, says Kennedy. The excitement will no doubt build as the years go by.

The official launch of the Leiper’s Fork “Bottled in Bond” range is scheduled for January 2023 with units to be available for sale at circa. £80-85 RRP.

Pol Roger Portfolio is a supplier partner of The Buyer. To discover more about them click here.

Stellenbosch & the power of wine and tourism working together