Krug 2008 was launched this week in a shabby chic venue in London’s Shepherds Bush, alongside the new blend – Krug Grande Cuvée 169th Edition. When Krug launched the 2000 vintage they did so at the Harrow at Little Bedwyn, the Michelin-starred restaurant that was run by Roger Jones, which was the first UK restaurant to pour both Krug Grand Cuvée and Krug Vintage by the glass. It seemed only fitting, then, that Jones, an internationally renowned judge of Champagne and sparkling wine should ‘take one for the team’ – hotfoot it into town to experience the launch for us, hear what ‘new’ chef de cave Julie Cavil had to say about the wines and to wax lyrical about the whole, amazing event.

Krug 2008 was launched this week in a shabby chic venue in London’s Shepherds Bush, alongside the new blend – Krug Grande Cuvée 169th Edition. When Krug launched the 2000 vintage they did so at the Harrow at Little Bedwyn, the Michelin-starred restaurant that was run by Roger Jones, which was the first UK restaurant to pour both Krug Grand Cuvée and Krug Vintage by the glass. It seemed only fitting, then, that Jones, an internationally renowned judge of Champagne and sparkling wine should ‘take one for the team’ – hotfoot it into town to experience the launch for us, hear what ‘new’ chef de cave Julie Cavil had to say about the wines and to wax lyrical about the whole, amazing event.

“Yes it definitely is a ‘classic beauty’ for me, what an incredible wine, buy it and leave to excel further,” Jones says of the Krug 2008.

Of course! Shepherd’s Bush, just down the road from the 107 year old market, in an old broker’s yard, on a once-disused and contaminated industrial site – that would be the perfect place for the launch of Krug 2008, one of the greatest icons of wealth and decadence. And you know what, yet again, the Krug team led by UK brand manager Jack Dundas was spot on… it was the perfect place to launch this new, eagerly-awaited Champagne.

Krug revels in launching its new Champagnes in unexpected places of ‘rough luxury’. The Krug 2004 was launched in Jack the Ripper country off the Commercial Road in London’s East End, the Krug 2006 was launched in the basement of Gibson’s Guitar studios and here we were at The Tin House. 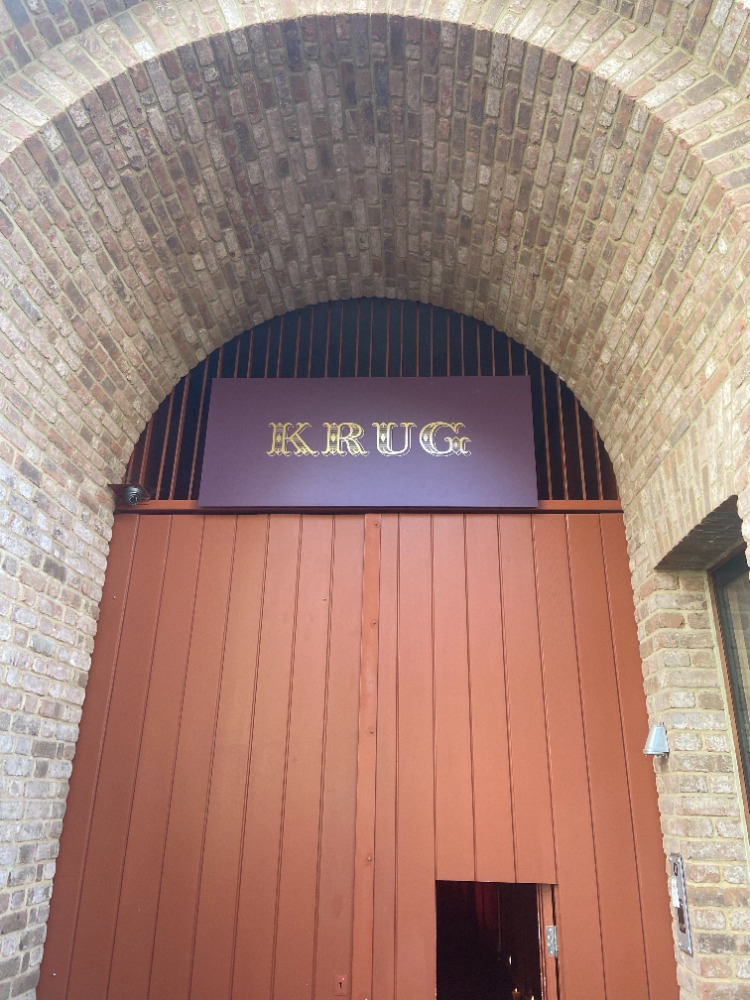 As you arrive and walk through the gateway entrance of The Tin House, squeezed onto a plot surrounded and overlooked by traditional terraced houses, you couldn’t help but marvel at this fascinating house, designed by architect Henning Stummel as a new home for his family, with a studio for his practice located in a separate brick gateway building. The building was named house of the year in 2017. 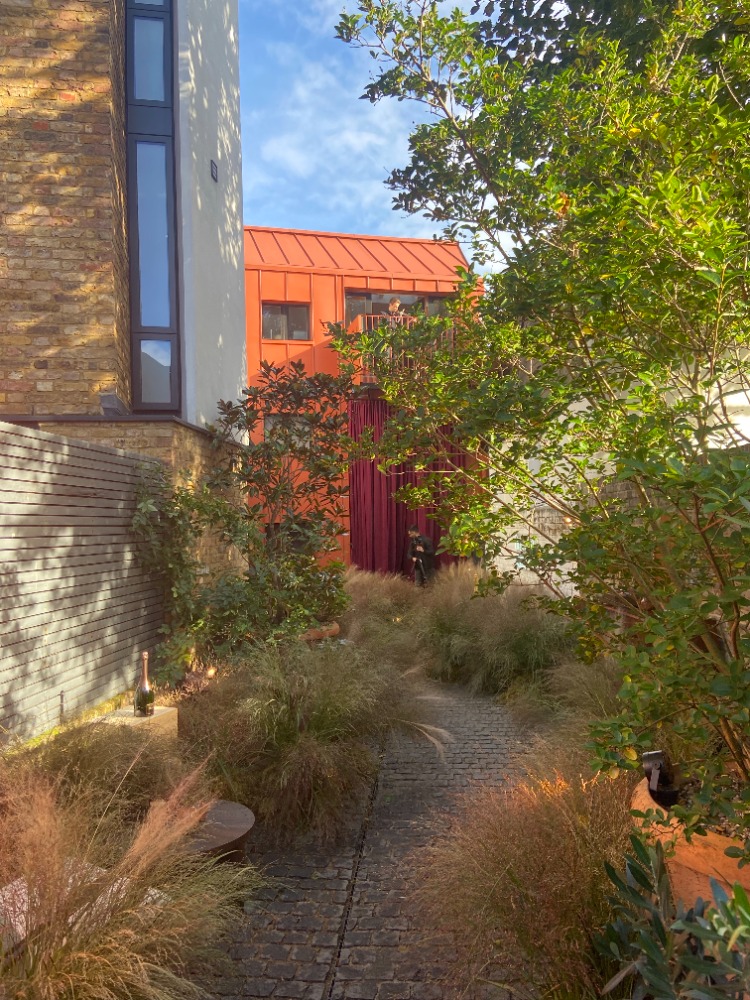 The late October sunshine gleamed down on the red metal clad walls and roofing offering a fabulous outside setting whilst we were introduced to the first of two Krug offerings. This was a pretty perfect urban garden terrace, with a solo violinist playing from high up in the roof, the splashing of water against the Krug water features in the pool, and the open pit fire all added to the excitement. It was an Alice in Wonderland experience like no other. 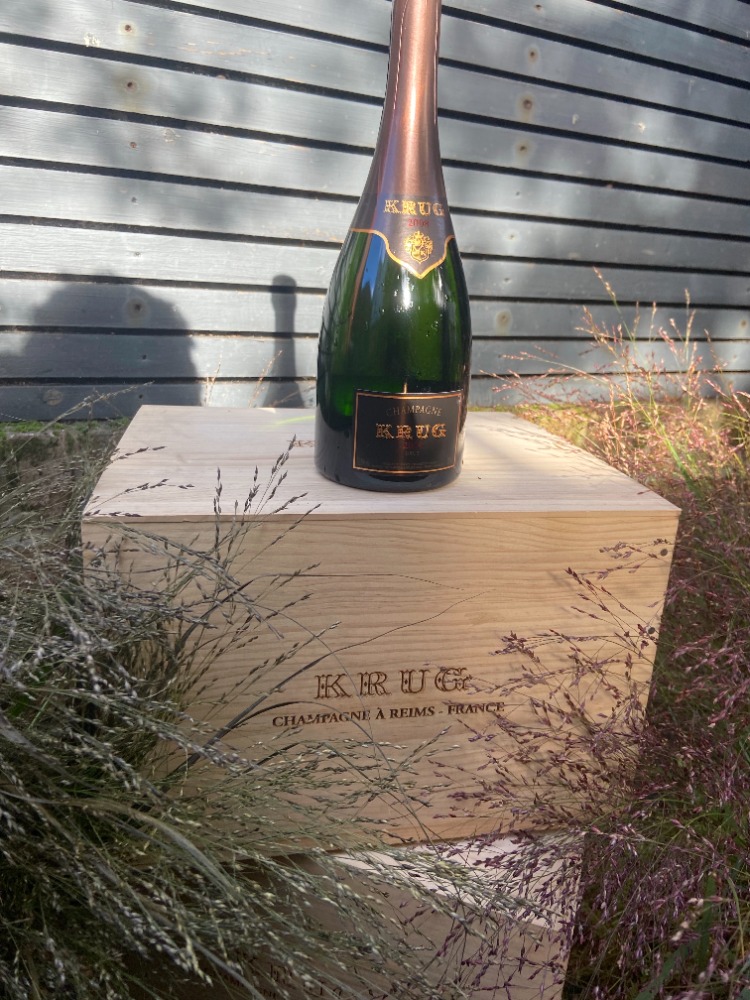 On arrival we were first introduced to the Krug Grande Cuvée 169th Edition, the latest release by Julie Cavil, Krug’s chef de cave. Although based on the 2013 vintage this multi-vintage flagship wine is made up from over 140 reserve wines (40%) going back from 2013 to 2000. Cavil admits that 2013 was not the best of years, but with Krug’s perfection in blending to achieve the perfect Grande Cuvée there is no need for concern.

Cavil highlighted Joseph Krug’s reasoning behind the Grande Cuvée and Vintage (Les Creations), which he established back in 1843 when he set up Krug. Cavil enthused about all the different vignerons who provide the grapes for the House, some have never left their villages let alone France, whilst others are super modern using drones to capture information on their grapes. It is the ability to get the ‘whole orchestra’ to work together to provide a perfect blend; citrus, red fruit and balance to create the perfect ‘Expression’ for the Grande Cuvée whilst the Vintage is a ‘solo artist’.

Cavil, who has been the chef de cave for just under two years now, then explained that the Krug 2008 is unusual chiefly because of the high percentage of Pinot Meunier in the blend – more so than Chardonnay. Although it is not the highest percentage in the history of Krug vintage – that is still held by the 1953 vintage with 30% – Krug 2008 had 25% of Meunier compared to 22% of Chardonnay. This high proportion is not arrived at by design, but by blind tasting, so Cavil and the rest of the tasting committee are not aware of the base grape, but make their decisions based upon the best expressions.

The Meunier was taken from South-facing slopes in the Marne Valley village of Sainte-Gemme “It was incredible,” said Cavil “we decided it would be perfect for the 2008… and any more Chardonnay would have been too much.”

The reason was that 2008 was a ‘cool year’ by modern standards and, along with the 2002, one of the best vintages of the past two decades. 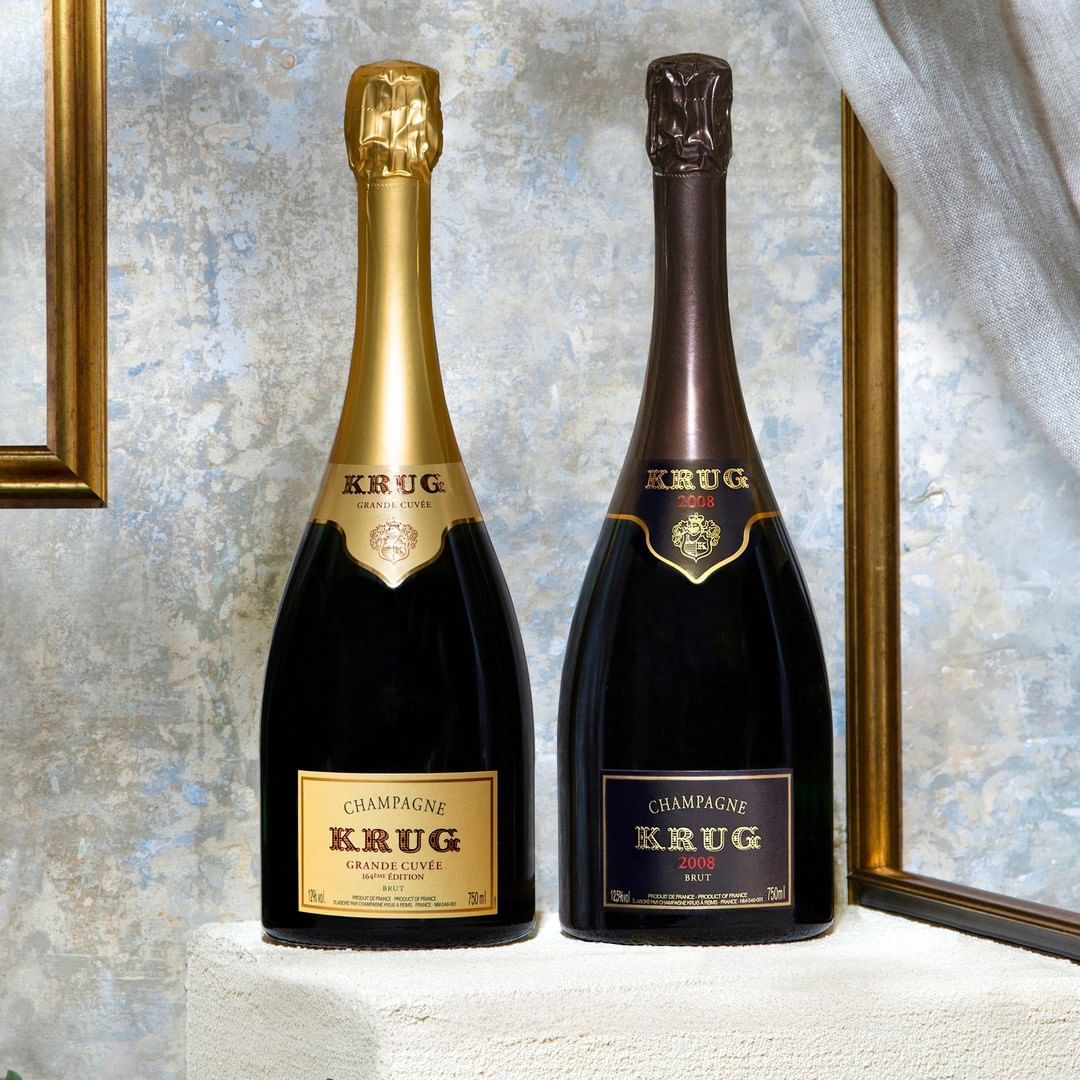 “We classify 2008 as one of the cool years in Champagne,” says Cavil, “there was a lack of sun, it was a perfectly classic northern climate, one that we have not seen for a while in Champagne. It was also a vintage without extremes, which meant that the grapes ripened slowly and regularly, which has led to a wine of great elegance, and one that is well-structured. It is straight to the point, classic, and long, and the wines were austere at the beginning, which for me is a good sign; when you have to wait, it is a good sign for the future.” 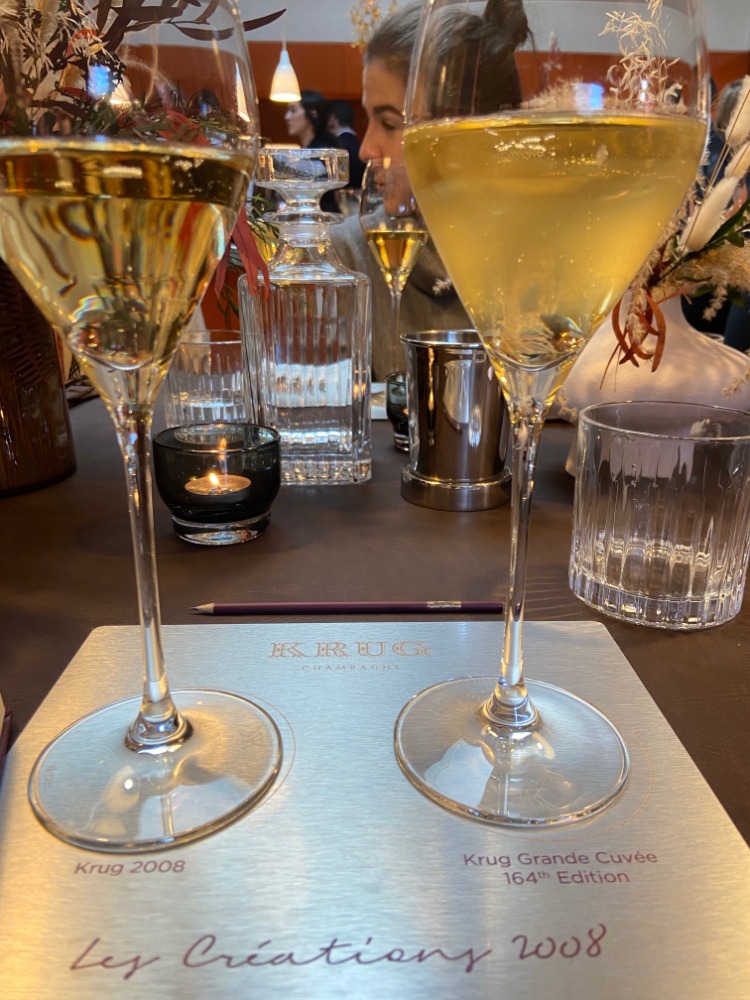 Nicknamed the ‘classic beauty’, this has both power and elegance, restrained but full of promise. Gentle on the palate to start, then it builds with great vibrancy, candied fruit and citrus peel, floral with tangerine and delicate ripe peeled apricots, there is a sea breeze gently rolling over it to give it freshness, some aniseed and buttery undertones, crisp apple tart. Yes it definitely is a ‘classic beauty’ for me, what an incredible wine, buy it and leave to excel further.

Dosage is 4-5 grams per litre, the wine was disgorged in late 2019, retail price £265 RRP. The Pinot Noir comes primarily from Krug’s vineyards in Montagne de Reims, including Aÿ, Mareuil, Bouzy and Ambonnay. 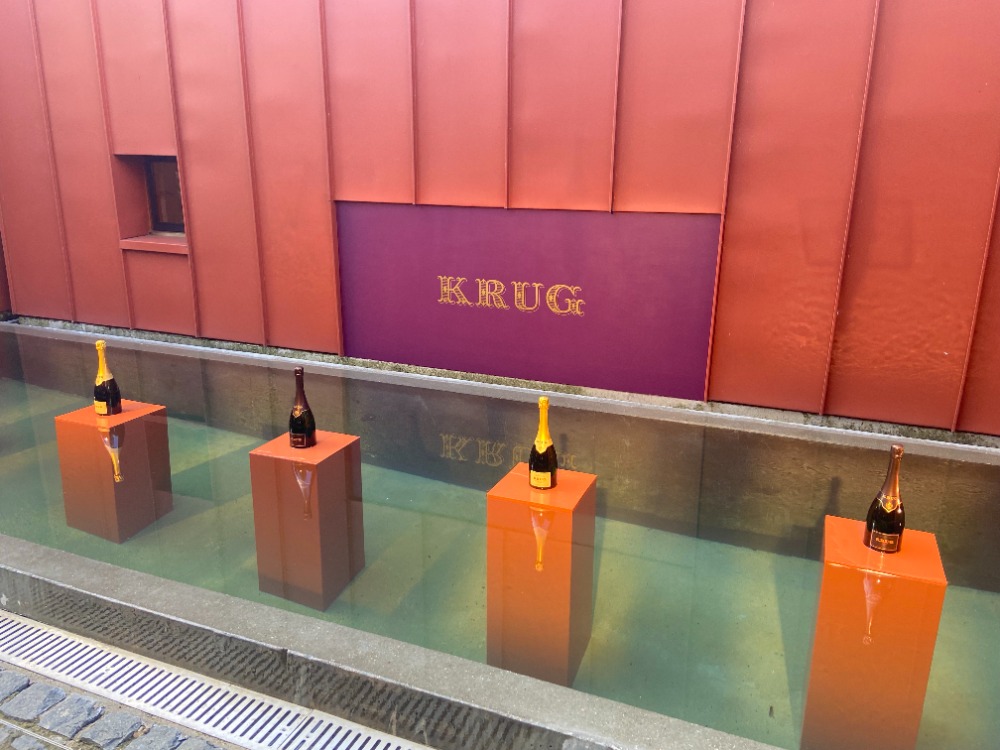 Arabian market on the nose with jasmine, cardamom, Thai citrus then a mid-palate which evolves with nuts, peeled white nectarines and tangerine zest, orange spices. There are some red berries and then it relaxes into a luxurious creamy mouth-filling brilliance.

We then entered the inner chamber of this wonderful modern venue, where music was played to heighten the Krug experience.

Based on the 2008 vintage but also sourced from a blend of 127 wines from 11 different vintages, with the oldest being 1990. 38% of this cuvée is from reserve wines, giving it an ability to age well.

So fresh and bright in first taste, with then a luxurious mouth feel, brioche, cinnamon, honey, ginger, vanilla spice, the flavours just continue to ride the wave, quite outstanding, pretty perfect. There is a ‘breakfast’ feel to it with the gentle toasty flavours intermingled with a savoury bacon nuance, layers of flavours and textures, ageing beautifully. ‘Uplifting and magical’ were my final notes on this. 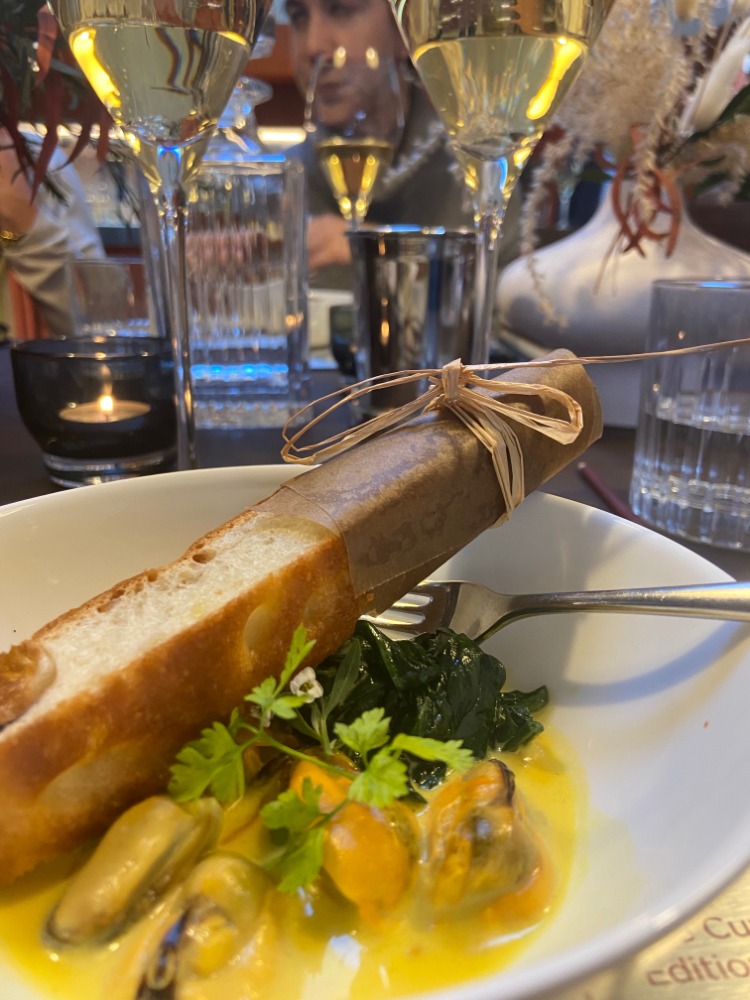 Krug always delivers and this was another exceptional out-of-the-box experience, but more importantly the Champagnes deliver, and with so much style and expression, we were also presented with a number of small plate food, with one of the best being gently cooked mussels with a light saffron curry, pretty perfect with the Krug Grande Cuvée 164th Edition. It is the attention to detail that keeps Krug at the fore.