There’s a great deal of excitement about the wines that are coming out of the Agulhas Wine Triangle – South Africa’s southernmost vineyards. This is a region with ancient soils, extreme winds and a raw landscape that are producing cool climate whites and reds of remarkable quality and elegance. On a recent trip to South Africa, Geoffrey Dean visited the region, tasted the wines from the 10 wineries and talked with some of the key players – Bruce Jack, Dirk Human and Pierre Rabie about what makes this new frontier of winemaking so special.

There’s a great deal of excitement about the wines that are coming out of the Agulhas Wine Triangle – South Africa’s southernmost vineyards. This is a region with ancient soils, extreme winds and a raw landscape that are producing cool climate whites and reds of remarkable quality and elegance. On a recent trip to South Africa, Geoffrey Dean visited the region, tasted the wines from the 10 wineries and talked with some of the key players – Bruce Jack, Dirk Human and Pierre Rabie about what makes this new frontier of winemaking so special.

“Those international wine judges who hadn’t come across Elim Sauvignons from the mid 2000s couldn’t believe what they were seeing. The wine was so fresh and had so much life to give still,” says Jack.

If the Swartland Revolution was the bright new force in the South African wine industry in the early years of the millennium, another is emerging in the form of the Agulhas Wine Triangle (AWT). It was set up by its 10 member wineries in 2019 as a non-profit organisation to showcase the wines, tourism and natural beauty of Agulhas, the most southerly point of the African continent. If the pandemic constrained its early momentum, the body is now well-placed to raise the profile of its top-quality wines on the international stage.

So who is involved in the Agulhas Wine Triangle?

More on its unique terroir shortly, but first an introduction to the triangle’s wineries. These are Black Oystercatcher Wines, Ghost Corner, Giant Periwinkle, Land’s End, Strandveld Wines, and Trizanne Signature Wines from the Elim ward; Sijnn from the Malgas ward; Olivedale from the Swellendam district; Lomond from the Cape Agulhas district; and the Drift Farm from the ward of Napier.

Some of the South African wine industry’s leading figures are involved, including Bruce Jack (Drift Farm), David Niewoudt (Ghost Corner), David Trafford (Sijnn), Dirk Human (Black Oystercatcher) and Trizanne Barnard (Trizanne Signature Wines). These are all highly respected winemakers, but they will be the first to tell you that what makes the AWT’s wines so special are its hugely varied soils and cool climate. Soils of sandstone, shale, iron ferricrete, quartzite and limestone lead to a whole host of different flavour compounds and complex, intense flavours. Ocean winds cool the vineyards.

“The soils are different from other areas primarily because of the way they were formed,” Bruce Jack told The Buyer. “When the ancient super continent Gondwana broke up, bits of other continents were left on the edges of Africa. So the soils in Agulhas were made up of other continents – Africa where the Drift is, Antarctica where Black Oystercatcher is and a mix of Australia and India at David Trafford’s Sijnn.

“While there are differences between the soils in the Agulhas Wine Triangle, there are differences with the rest of South Africa. That’s the first point, and the second point is that while a lot of the soils in the rest of South Africa are invigorating, our soils are devigorating leading to a naturally low yield, and naturally more elegant and concentrated wines as a result. And then when you combine that with the weather at the tip of Africa, it’s windy and the wind is cool. Those things have a big impact.”

That the western Cape is the windiest wine region in the world is another key factor for Jack. “The winds in the Agulhas Wine Triangle are predominantly coming from the south-east and the south-west, off the ocean,” he continued. “The majority of the vineyards are by the ocean and that has a significant effect in summer months. In winter months, it has less of an effect as there’s less wind and you don’t get as cold winters as you do on higher-lying areas or further inland. That’s one of the reasons why the white wines of the Agulhas Wine Triangle are so delicious.” 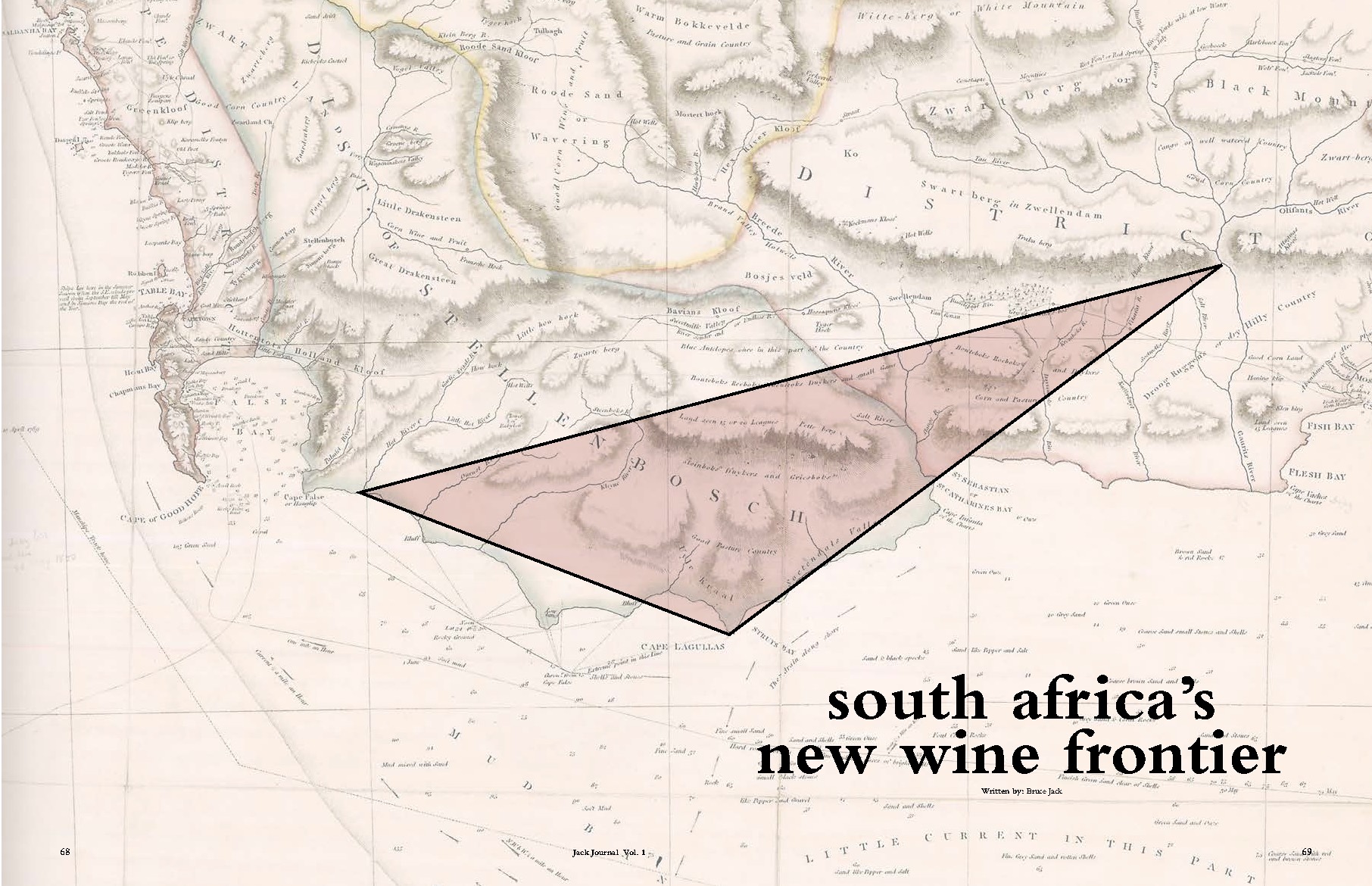 The AWT’s very isolation is actually more of a strength than a weakness in Jack’s view. “There’s a self-sufficiency here as a result, a philosophy if you like, that has a huge impact,” he declared. “Terroir doesn’t exist without human interaction with it. Farmers here have to be independent and resourceful because of the distance from the traditional wine services. You don’t get someone out on the same day who can fix the press, or viticulturists from Stellenbosch or Paarl available on a whim.”

“There is a lot of trial and error, and this means that, layered onto different soils and climate, a lot of the institutional wisdom that exists in Stellenbosch is not applicable to our terroir – the different ways we prune, the different times we prune, how we manage our canopies. The vine husbandry that takes place in this area is different and helps give elegance and lower crop levels. So all of those things combined mean we offer something different and really exciting.”

What is remarkable about the AWT’s white wines is not just their exceptional quality but also their extraordinary capacity for longevity. “That is unusual in the world, never mind in South Africa,” Jack professed. “For a 15-year old wine from Elim to win the Old Mutual award for the best Sauvignon Blanc in SA is mind-blowing.” This wine was The Berrio 2006, made by Jack himself from fruit out of grower Francis Pratt’s vineyards.

“Those international wine judges who hadn’t come across Elim Sauvignons from the mid 2000s couldn’t believe what they were seeing. The wine was so fresh and had so much life to give still. I’m not knocking New Zealand, but you don’t get 15-year old Sauvignons from there that develop nicely. Theirs are incredibly powerful and wonderfully engaging in youth but they don’t have the longevity that ours do. Even Sauvignons from Sancerre, as well as whites from Bordeaux, don’t look any better than Elim Sauvignons after 15 years. So it’s an exceptional area from a white perspective.”

As for the triangle’s red wines, they are notable for their elegant, crisp, crunchy red fruited and lower alcohol levels. “These cool summers we get are the key, giving us a real point of difference from Stellenbosch and Swartland,” Jack said. “In the former, you get quite inky, quite ripe, rich alcoholic red wines. The Swartland is all about robustness, and their wines are quite rustic although they have their own charm of course. In our reds, you’re getting a lot more spice, a lot more herbaceous character and more pepper than elsewhere in the country. While I also like the more ripe, rustic styles, there’s something very beguiling about the elegance you’re getting from this area.”

Equally beguiling is the AWT’s beautiful Nuwejaars Wetlands, a protected conservancy of 47,000 hectares which was formed by 25 local landowners, the Elim community and the Department of Rural Development and Land Reform. Dirk Human, a passionate conservationist, is chairman of the Wetlands and operates safaris through it.

“We’ve chosen to run our land and waterscapes as a special management area to protect our natural world,” he said. “Our irreplaceable wetlands, the peat-like soils here that store carbon, the critically endangered habitat and the wildlife they support can all contribute to a nature-positive Overberg and South Africa.” The Wetlands, which connect the Agulhas National Park and De Mond Nature Reserve, provide ideal habitat for a rich diversity of birdlife as well as buffalo, hippo and rare antelope in bontebok and grey rhebok.

Taking a closer look at the wineries involved… 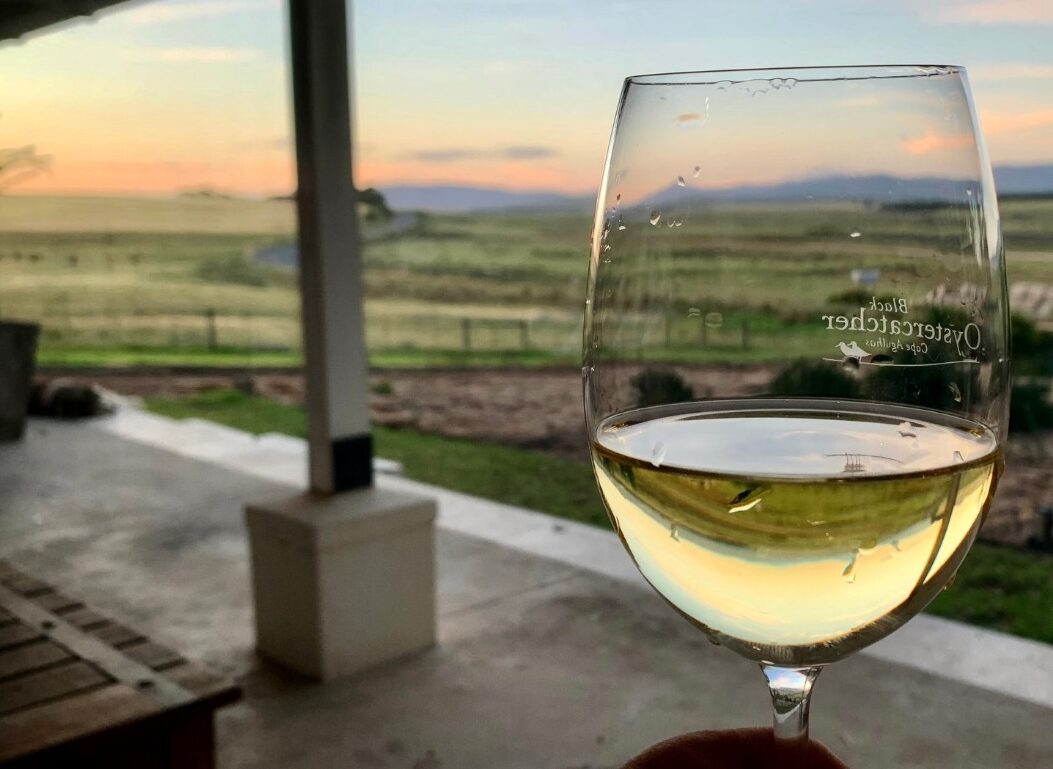 Exceptional white wine producer, specialising in Sauvignon Blanc and Semillon. Dirk Human planted the vines in 1998 on the family Moddervlei farm, helping to pioneer Elim as a wine ward. Only 48,000 bottles per annum made, with 5% exported, although Human would like to increase both counts. Delightful cottage accommodation available at the winery, which has become a popular destination with a deli, pizza restaurant and shop. Excellent own label craft beer also made on site by an English expatriate, Fraser Crighton. 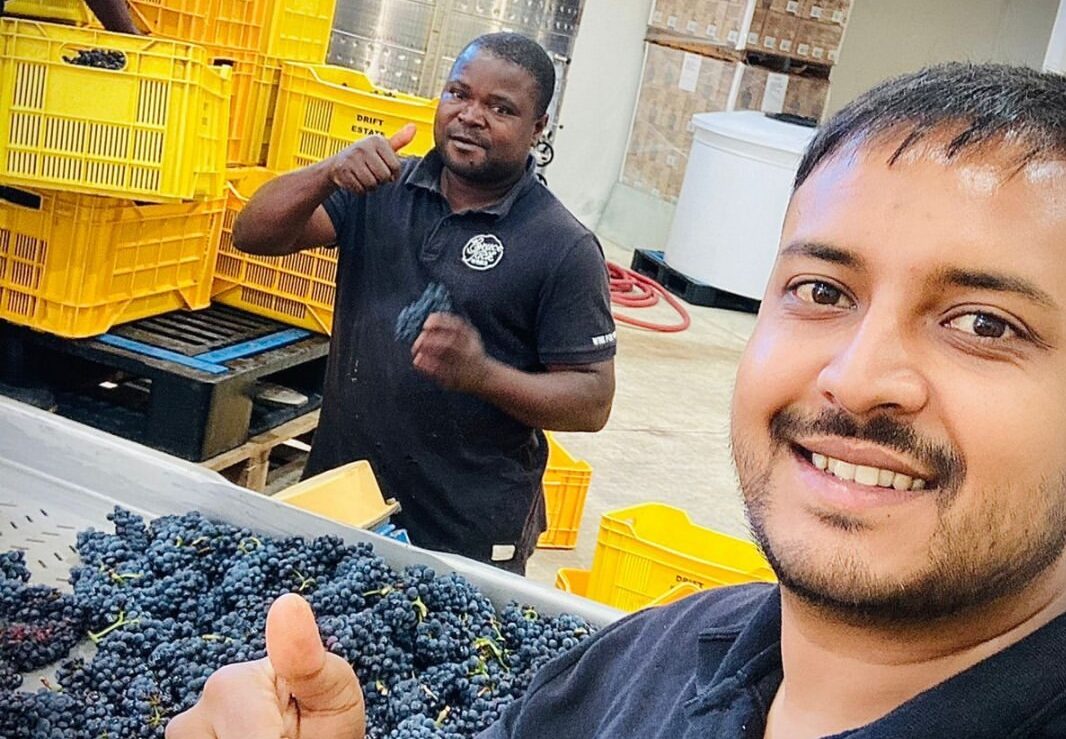 The farm, near Napier, is home to Bruce Jack, one of South Africa’s most charismatic and innovative winemakers. Bruce Jack Wines has just made it into the top 20 of Drinks International Magazine’s “The World’s Most 50 Admired Wine Brands” for 2022. Although he skilfully oversees the whole operation, Jack’s excellent white wines are made at Black Oystercatcher by Thornton Pillay, while award-winning Canadian winemaker, Marlize Beyers flies in during harvest to craft a superb range of red wines, renowned for their wacky labels. These include the ‘Gift Horse’ Barbera, the ‘There Are Still Mysteries’ Pinot Noir and the ‘Ghost in the Machine’ Syrah, each single vineyards.

David Nieuwoudt, the renowned Cederberg cellar master, makes the eight-hour round trip to Elim every Monday for the day to oversee production of his acclaimed Ghost Corner range. The Wild Ferment Sauvignon Blanc 2020, with its silky quince and white pear notes, is a stunning wine, matured in 400-litre barrels, of which 20% is new. A touch of residual sugar (4g/l) masks race acidity (pH3.3). The Semillon 2019, with an even lower pH, is linear with honeyed notes, while both the Pinot Noir and Syrah are classic cool climate examples. 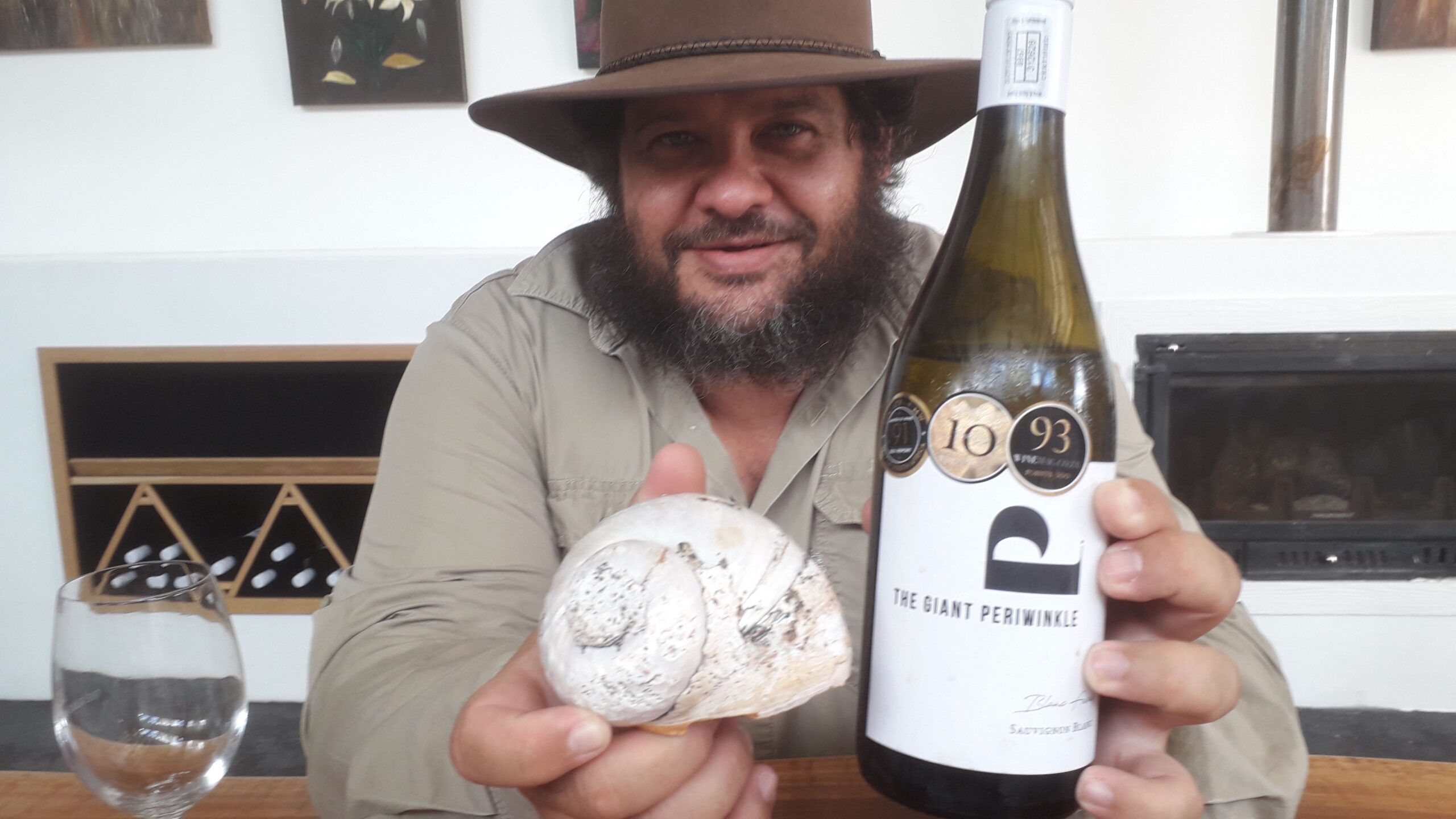 No exports as yet, but if anyone can persuade eccentric Cape Town barrister-cum-winemaker Pierre Rabie to ship some, drinkers will not be disappointed. Named after the sea snail that is pleasant to eat, the impressive range includes Sauvignon Blanc, an SBS blend, Syrah and Pinotage.

No wines tasted but winemaker Shawn Thomas is producing two Syrah and two Sauvignon Blanc labels with strong exports to several markets, including the UK and US. 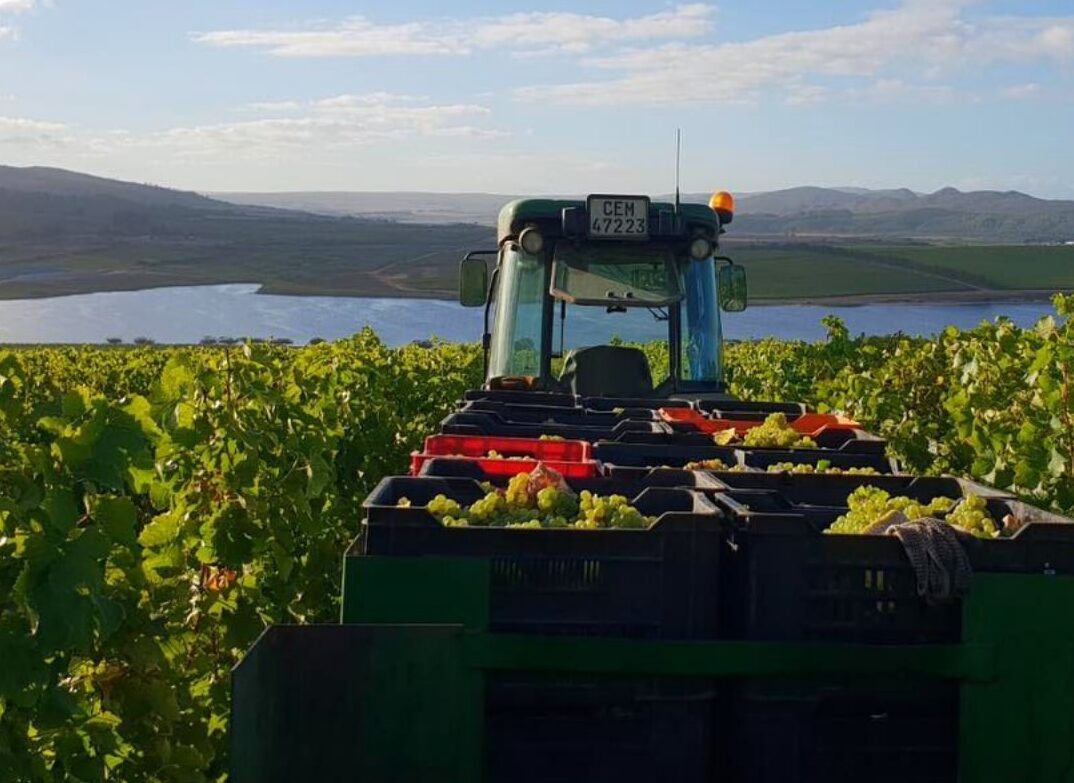 Multiple labels from this scenic estate within the Walker Bay Conservancy, with its 130 hectares under vine and 4-km long dam (and restaurant overlooking it). The vines were planted in 1998 under Distell’s ownership before they sold out seven years ago. Former Simonsig winemaker Hannes Meyer joined in 2020, and crafts several superb Sauvignon Blanc labels, including Pincushion, Sugarbush and Ben Nevis. The Conebush Syrah 2019 from sandy clay and granite soils is another stunning wine. 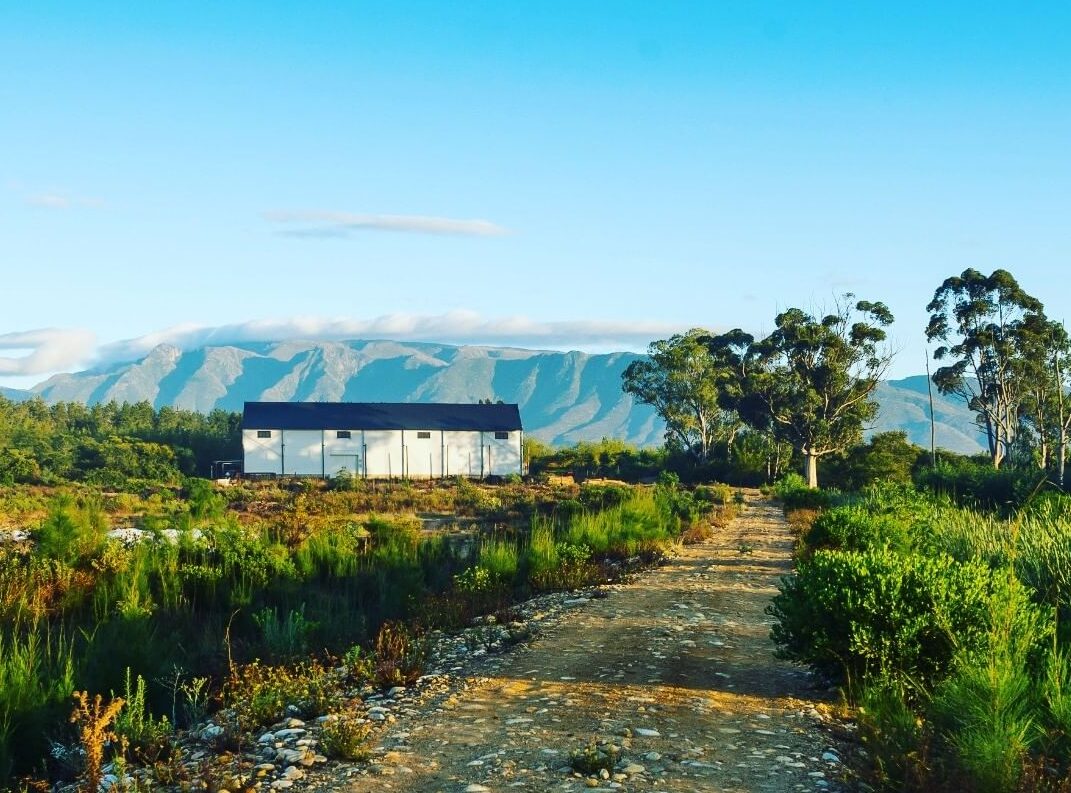 On vineyards planted right by the Breede River, there is notable minerality in the white wines (from ‘mineral clay 2.5m down under sandy topsoil’ according to winemaker Jolene Le Roux). Her ‘Respect for Nature’ labels – both the Chardonnay and the Tempranillo – showed especially well while her rare Roobernet ‘Mystery of Nature’ (a cross of Cabernet and Alicante Bouschet) had endearing freshness and bright red fruit. Their Edel Laat Oes 2015 noble late harvest Semillon is premier league SA dessert wine.

No wines tasted, but they come with a reputation. Pronounced “Sane”, the winery is owned by Stellenbosch producer David Trafford and business partner Simon Farr, with Charla Bosman the winemaker. Mainly southern French and Portuguese varieties planted as bush vines on rocky soils by the Breede River. The ‘Sijnn Red’ and ‘Sijnn White’ labels, which are Shiraz and Chenin Blanc-driven respectively, have been especially well received. 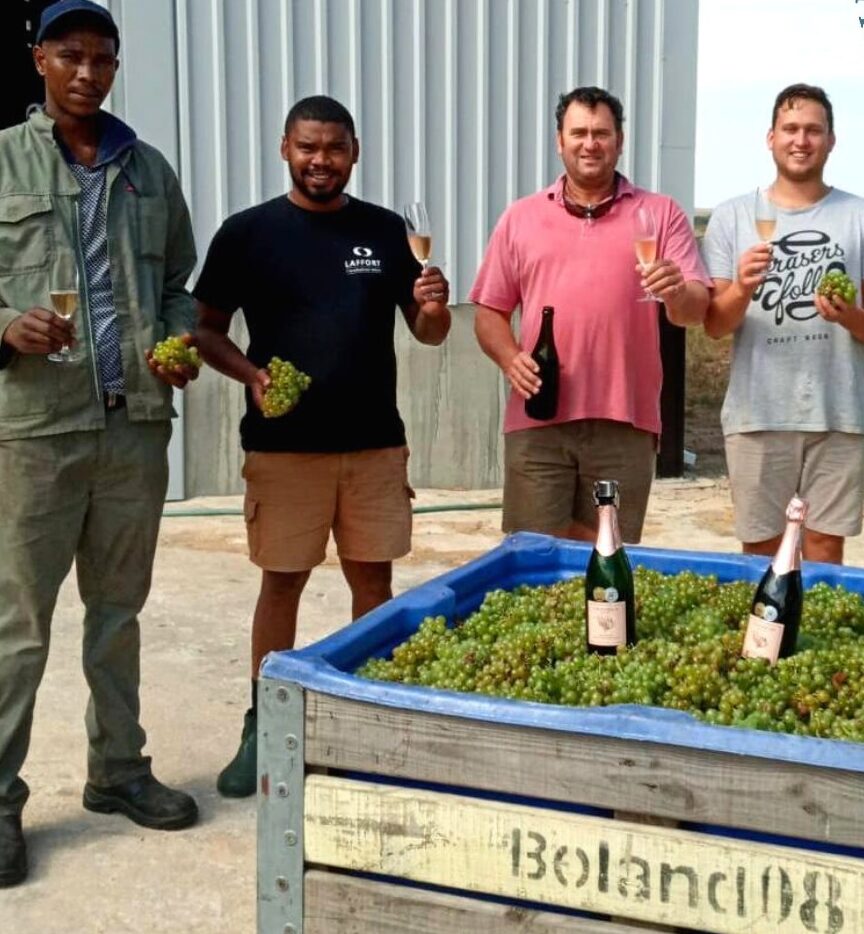 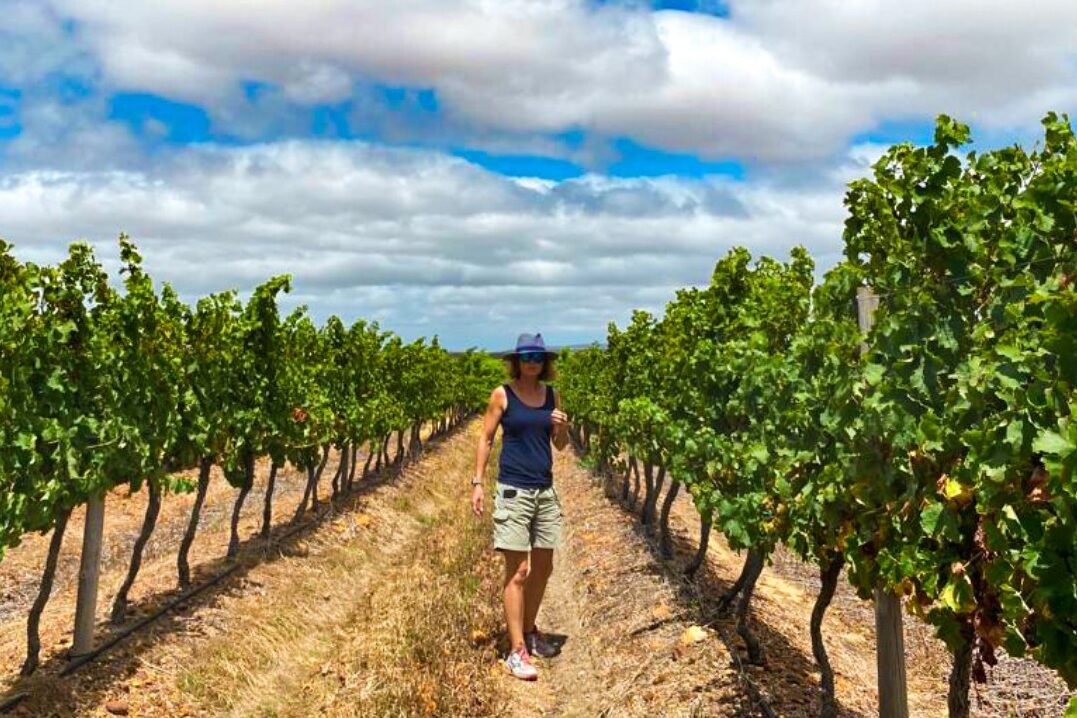 Trizanne Barnard, a top-class surfer with film star looks, is one of SA’s rising winemaking stars. Her Reserve Syrah 2019 won the Old Mutual Trophy for Best Shiraz in South Africa last year, while her Semillon-Sauvignon ’19 blend (both labels from Elim fruit) is as good as any SSB in South Africa.