There are a number of factors that influence the price of Californian wine – some obvious ones such as the cost of water and some less obvious, like the structure of Members’ Wine Clubs.

I reckon if I asked 10 trade buyers in the UK the first three things that popped into their head when talking about wine from California, then for all of them at least one of their answers would be the one thing that nobody ever wants to talk about.

Of course it’s the price.

Californian wine is expensive in the grand scheme of the world of wine, but having just come back from a trip over there, I’m looking at that from a different angle these days.

From my point of view this is an awkward but necessary post to start with. Awkward because the guys and girls from the California Wine Institute may not be expecting my lead article to be about one of the most contentious issues with Californian wines on the export market. But necessary because a lack of understanding about the pricing structure around the world makes people switch off to a lot of these wines.

The signs weren’t looking good when I first got out there. Our first morning in Napa and there we were sampling some good Sauvignon Blanc, but for $35 a bottle? Hmmmm. Tough sell.

But over the course of the week, talking with owners, winemakers, and some of the locals in downtown Napa, the pieces of the punchy puzzle started clicking together.

For a start, investment needs returns.

New investment has been flooding into the region since the 1970s, especially following on from the worldwide headlining wins at the Judgement of Paris in 1976. It’s not exactly a cheap business setting up a winery, and those money men may not expect the earth in return, but something at least.

We forget that in Europe the leap forward in many regions came from large grants from the EU. In the States it’s pretty much all privately financed. 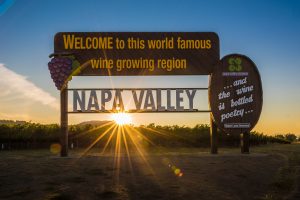 Also, these aren’t just wineries, they’re destinations. Especially in Napa, these gaffs are set up for the weekend travellers from LA and San Francisco to come and bask in the glory of ‘Wine USA’. And why not?

I remember wandering around Inglenook, one of Francis Ford Coppola’s places, and it was decked out like a 1920s Jeeves and Wooster set, complete with gift shop of course!

Raymond Winery, with its S&M dressed mannequins, velvet adorned walls, and stuffed lions, is somewhere I’ll never ever forget. But obviously all that costs money. 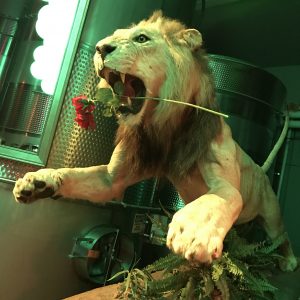 The way these wines are sold makes the export of them a tad tricky from a price perspective. Wine clubs in the US are all the rage. There are lots of funny post-prohibition rules left over that have too many people making too much money to change them, notably the three-tier selling system for retailers.

So what wineries do is bypass that entirely and sell directly to customers through members’ clubs.

We visited the glorious Ovid Winery, complete with panoramic viewing balcony of the entire Napa valley floor. Their top Hexameter ‘Priority Red’ label was fabulous, but at $285 a bottle you’d expect it. No,w with 85% of their wine sold directly to their members’ club, do you think they lie awake at night wondering about whether to drop the price?

Making wine is not the cheapest thing in the world to do in California. Some of it is unavoidable. Water costs are high and increasing. Temporary labour used during harvest is hired from a small and shrinking pool of Mexican workers. Increasing pressure on the border doesn’t help and neither does the competition from the relatively rich and recently legalized marijuana industry.

Other costs are avoidable, but noble in their own way. Both Napa and Sonoma are looking to be fully sustainable viticulture areas before 2020 ticks over. We should all be happy to pay a few quid more for that to spread around the world.

From a UK perspective, we’re also suffering from a downturn in buying power. The pound getting a hammering due to Brexit isn’t their fault, is it? But unfortunately it’s now more than ever that us Brits need to look for where the real value is. That $30 Sauvignon Blanc was £15 not too far back, and now it’s £25-ish. It’s a tough reality at the minute.

So the price of Californian Wines needs to be put into perspective.

There will still be plenty of price-conscious consumers who couldn’t give a monkey’s about any of these points and will continue to spurn it. They’re allowed. But there are some seriously good wines knocking around California, and hopefully now that that ‘elephant in the room’ is a bit more in context, it’s a bit less scary sticking those bottles of Ridge Montebello on your wine list.

It’d be a shame to miss out…

Mike Turner runs the wine blog Please Bring Me My Wine and is a director of 20h33, an importer and marketer of Bordeaux wines. Follow Mike on  www.twitter.com/PBMMW and www.twitter.com/20h33