“His first key point… be in no doubt, Champagne is getting hotter… the region is no longer “frais” but “tempéré,” writes McCleery.

We are not being introduced to new ideas here. Increased biodiversity in the vineyard has been proven to improve soil health and its ability to fend off disease; we all know that providing appropriate habitat means homes for predators who feast on the pests who might otherwise wreak havoc on the vines.

For me, what is important, is that a house with the stature and influence of Ruinart is speaking loudly and supportively about the importance of biodiversity in the fight against climate change. With a leader like Ruinart in play, smaller estates and stubborn naysayers can yet be converted.

Victor Gandon, head of development & innovation, shows us recent hedgerow plantings on the edges of the Ruinart Premier Cru vineyards at Taissy. Last April Ruinart announced that it was piloting a biodiversity project in this historic 40 hectare vineyard in tandem with Reforest’Action. Hedges are being planted around and within the vines, alongside 14,000 tress and shrubs, the aim being to re-establish ecological corridors within the vineyards. These vitiforestry practices are part of the Imagine project, of which Ruinart is a member, an initiative to preserve and regenerate forests on a global scale.

A paper from the Comité Interprofessionnel du vin de Champagne (CIVC) outlines the issue: “The Problem: In the past, trees, groves, orchards, and hedgerows punctuated the vineyards of Champagne. Over time these have been pulled out and today the landscape is a vine monoculture … The objective isn’t to create a series of hedged landscapes but to improve the look of the vineyards and create visually pleasing landmarks…”

Although it later goes on to discuss sustainable viticulture and some of the environmental benefits, the priorities in CIVL’s paper appear a little off kilter – they seem to be more worrying about Champagne’s UNESCO heritage status and hiding ‘unsightly’ things, than it is about the rapidly intensifying challenge of climate change.

Perhaps a rewrite, with help from Ruinart’s cellar master, Frédéric Panaiotis, is in order, to help us all understand the permitted shrubs and trees, the nutritional benefits to the soil, what flora and fauna they’re likely to attract and a few good words on biodiversity generally.

It is a joyful experience to hear Panaiotis speak factually, eloquently and with purpose.

His first key point… be in no doubt, Champagne is getting hotter. According to the Huglin Index (measuring vineyard temperatures), the region is no longer “frais” but “tempéré”.

The second take-home message comes from a comparison of the 2009 and 2010 vintages, against the weather average for the previous ten years. The octagonal diagrams show dramatic changes in both rainfall and annual sunshine hours: markedly less of the former and a rise in the latter.

These irrefutable findings give ongoing leverage to Ruinart’s sustainability programme. They have experimental vineyards at Tassy that allow them to monitor the impact of nearby hedgerows and the increased fauna. They’re also comparing organic treatments, such as seaweed versus the conventional chemical to treat mildew. Visitors to the site will also see nesting boxes for bluetits and coaltits, with bat boxes too. Also in view, some impressively speedy bunnies!

A visual statement of Ruinart’s support of increasing vineyard biodiversity is Nils-Udo’s trio of ‘nests’, that sit within the vineyard; these are part of Ruinart’s ten-year countdown to their 300th birthday as well as a place for bees and birds to live, nest and thrive.

All of which set the scene for what was to be a magical and illuminating introduction to Dom Ruinart Blanc de Blancs 2010.

Dom Ruinart Blanc de Blancs spends more than ten years ageing on the lees. The significance then, of the decision to move away from crown caps and back to cork stoppers for this time, should not be underestimated.

Modern-day trials of cork stoppers during the ageing of Dom Ruinart’s Blanc de Blancs began in 1998. The results are fascinating, given what one might assume about crown caps versus cork and the relationship with oxygen.

Panaoitis makes his point with a slide that shows oxygen intake over a nine-year period. For the first three years, cork’s oxygen consumption is slightly greater but, surprisingly, at this point, the picture switches and it is the crown cap wines that take the lead. More importantly still, the O2 consumption steadily rises, whilst the wines under cork remain much more constant. 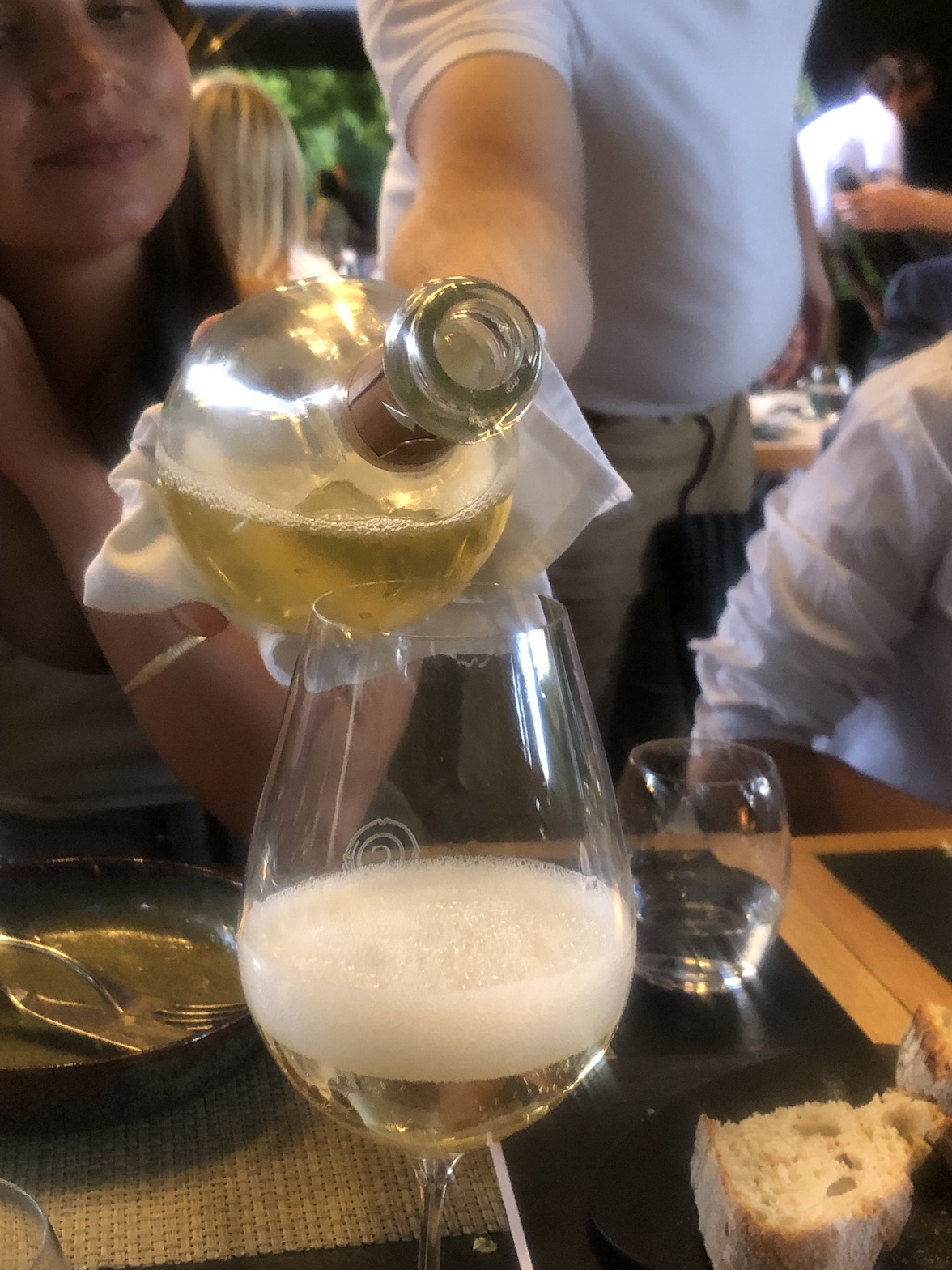 To clarify the seismic change, we are given both the 2009 and 2010 Blanc de Blancs wines to taste. Both share Ruinart’s trademark freshness and brilliantly persistent airy mousse. After that they diverge in fairly dramatic fashion.

Accepting the uniqueness of the differing vintages, the 2010 is notably more mineral and I would go so far as to say that, if tasted blind, I’d think it had spent some time in oak! Clementine, green honey, frangipane, and preserved lemon are readily identifiable on this still, very youthful 2010. The palate is quite angular, but its breadth and complexity are clear.

2009 is entirely different, and the generosity of the vintage gives it an upfront lustiness that is brilliantly delicious.

However, I can’t but agree with Panaiotis (and you’d be a brave body that didn’t in the circumstances!) that the lees ageing under cork has given the vintage Blanc de Blancs an added layer of complexity, and the future for the 2010 looks to be thrilling.

The die is cast. Future vintages will only benefit from what has been learnt and the knowledge that is continuing to build.

The importance of doing things by hand

“He who works with his hands and his head, and his heart is an artist…” St. Francis of Assisi

At the start of our visit, standing in the Grand Cru vineyards of Sillery, there was a good deal of talk about the importance of human hands in the making of Ruinart Champagne. The importance of grape selection because of hand harvesting, and bottling and labelling by hand were also explained. What I found most interesting was the return of manual disgorgement.

With the decision to move back to lees ageing under cork, so it is necessary for Ruinart to return to people skill. This is because of the metal staple that holds the cork in place.

The riddling team choreograph a careful turning of the bottles to lead the lees towards the bottle neck and then disgorging can begin. Once the bottle neck has been frozen, the cork is popped, and each bottle is smelled by the disgorger to check quality. There’s a mere 4g/l of dosage and then ‘jetting’, whereby a droplet of water is injected at speed into the bottle, causing the wine to foam. This expels any air out of the bottle, removing oxygen, prior to corking.

Ruinart’s commitment to sustainability and the environment is well underway. They’re using their heads, applying science and research, whilst curating handcraftsmanship, that ooze from every drop of Ruinart. St. Francis of Assisi would be proud.

Taste Champagne 2022: Why flexibility is key to sustainability