Across its four appellations, Chablis has surprising variety in flavours and price points from Petit Chablis through to the Grands Crus. Here are six you really should consider for your list from the excellent 2014 and 2015 vintages.

Jean-Marc Brocard is one of the biggest names in Chablis, a man who pioneered the region and whose vision has reaped handsome rewards.

His son Julien is taking over more and more responsibility within the winery, whose output of three million bottles per annum does not overshadow the very high quality of the wines across the 40-wine range.

On my visit I tried most of the range, both of the 2014 and 2015 vintages and also some aged. For me the absolute standout was Julien’s range of biodynamic wines that he is making under a sub-brand that bears his name.

La Boissonneuse has seen some wood that helps give it structure, but it is pure, linear and with terrific balance and in a vintage that will see it age very well. The label is different from the master brand, it is modern and is a must for those in the on-trade looking for a quality biodynamic wine for its lists. Incidentally, The Wine Society, that uses Brocard for one of its white label Chablis, retails this for £14.95 which is enormous value. Buy from Berkmann

With the messy ten year legal battle over the sale of the Billaud-Simon family vineyards firmly behind him, Samuel Billaud is now raring to go in his new winery and home in the centre of Chablis. Custom-renovated it’s a wonder of precise engineering that’s somehow carried across into the skill behind his range of clean, exactly-formed wines. 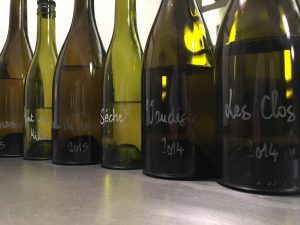 I tasted the full range that started with this Petit Chablis and ended with the Grand Cru wine of Les Clos. I then returned to the Petit Chablis and it still stood up and wasn’t in any way daunted – a true sign of a superb ‘entry level’ wine.

Petit Chablis is often mistaken for ‘second rate’ Chablis. It is no such thing. It is from newer vines on the tops of the hills and has a different soil composition which makes it perfect for lively, impetuous wines that have a young, crunchy profile.

This was the best Petit Chablis I tried on my trip that visited nine producers and is an absolute steal at an IB RRP of £9.50. Buy from Charles Taylor Wines

This winery was acquired by Maison Louis Latour in 2003 and since 2004 the wine-making has been under the direction of  Jean-Philippe Archambaud across a variety of sites in Chablis and also in the Coteaux de l’Auxois and L’Yonne. 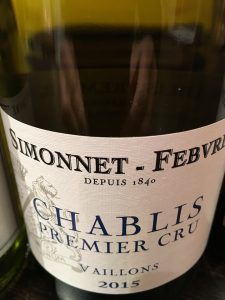 Of all the 17 premier cru sites in Chablis, Vaillons gives its wines a real vivacity from its height, sunny exposure and soils. Montmains, for example, which is slightly lower down from Vaillons has a broader, earthier taste.

Simonnet-Febvre’s Vaillons is a delightful wine with a real fresh floral quality on the nose – honeysuckle – and a richness and mineral backbone that works well together. Although this is best drunk in 4-5 years time, if you like the fresh aromatics it is fine to drink now.

In fact, as a general rule the Vaillons wines as well as other ‘Left Bank’ sites can be enjoyed younger than the wines from the ‘Right Bank’ and 2015 is a vintage that is far more approachable in youth than the more traditional, steely 2014 vintage, so this is a good wine for putting on the lists earlier than the 2014s perhaps. Buy from Louis Latour Agencies.

One of the things that starts to emerge on a visit to Chablis is the discernible difference between the different vineyard sites. Tasting range after range, you do start picking out the differences between aspect, soil type, altitude and level of exposure quite rapidly. The purity of the Chablis winemaking also allows the particularities of each terroir to shine through. 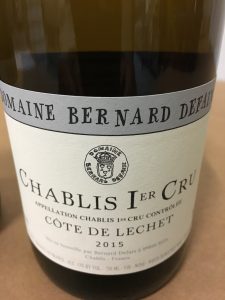 Côte de Lechet is one of the Premier Cru vineyards that really did resonate with me.

Winemakers Sylvian and Didier Defaix, two sons of founder Bernard Defaix, are the biggest owners of this vineyard that is very stony and very sunny, leading to powerful, floral wines that have a mineral intensity and a distinct gunflint nose.

Defaix produce two wines from this site – the straight Côte de Lechet, and the Reserve that comes from 60 year old vines.

Half of the Reserve is fermented in oak barrels, half is kept on the fine lees for 12 months with regular ‘battonage’ with the blend bottled 18 months after harvest.

Both wines are exceptional and very different. The Reserve is too oaky on release obviously and needs 4-10 years cellaring to bring out the potential of its age-ability. Which is why for the on-trade I would recommend the straight Côte de Lechet as it can be drunk much earlier. Buy from Alliance, Enotria&Coe, Flint,

Christian Moreau owns some of the best vineyards in Chablis and has an impressive range but it is this unique wine that was the highlight of a range tasting. 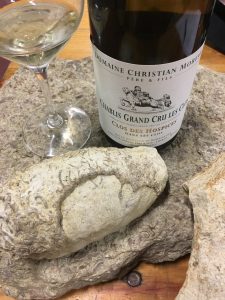 For sure his Les Clos 2014 has been getting all the press attention and has rightfully won many awards. It is stunning. But the Clos des Hospices is something else. What makes it unique is that the vineyard lies at the foot of the Grand Crus sites in Chablis.

It was one of the first sites to be planted with vines by monks who could easily get to prayer from here, being in earshot of the bells. By being close to the river it means that this site is rarely so affected by frost and also has a richness to the fruit given to it by humidity in the summer.

But the major defining characteristic of this terroir is that the gradual erosion of the top soil from the Grand Crus sites including Les Clos, that sits above it, means that the wine produced from this site is mineral to a bewildering extent.

Both the 2014 and 2015 were standout but the 2014 was astonishing. It had an electricity to it. I defy anyone to get more ‘stone’ into a wine! Not cheap but very good value.

Moreau is also only one of two producers who have vines in this site, so there is even more of a story to tell. Buy from Thorman Hunt

Another of the big players in Chablis with 90 separate parcels set in 51 hectares, William Fevre has an impressive range of wines, all of great purity and quality. 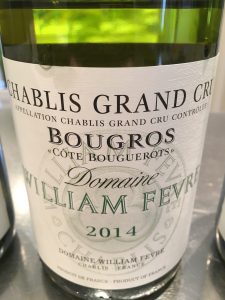 I thought all of its Grands Crus showed particularly well, with the individuality of the different sites very much in evidence.

For a Grand Cru with much more muscle – much more full and rich – then Bougros, which is at the Western end of the Grands Crus area is a wine to consider particularly for a point of difference. Fevre has half of this 12 hectare site and is understandably keen to see itself as a ‘specialist’ with this wine.

On the nose it has lots of complexity – stone, flint, flowers – but it is in the length, minerality and power that it is distinctive, in contrast to say the Les Clos that felt more citrus and clipped. Both wines had remarkable balance and finesse.

Interestingly, the 2013 Bougros had real notes of exotic fruit – pineapple – both on the nose and on the palate. Buy from Fields, Morris & Verdin

Incidentally I noticed that Bordeaux Index/ BI has an 8-case parcel of the 2011 Bougros on sale for £460 RRP IB.