“The end result, though, is that 2019 a vintage that has produced elegant wines with a lot of definition,” writes Dean about Boekenhoutskloof 2019.

“We’re OK but we mustn’t mention Adult World this year,” so said Tim Atkin MW as he kicked off a masterclass to launch the Boekenhoutskloof 2019 vintage with technical director Marc Kent live in person this year.

To finally park this one, the story which Atkin was alluding to and which we mustn’t mention (again) is what happened to the vineyard that was the source of Marc Kent’s seminal 1997 Syrah which was his first ever and legendary wine with which he hit the bullseye and effectively put South African Syrah on the map. Even he’s not sure exactly what he did right but, when he went back to the vineyard next year to get another load of fruit he discovered the vines had been grubbed up and what had replaced it was a giant porno store called Adult World.

I’ve heard this story twice now and both times Marc never says whether he went into the store or not.

One suspects, however, that Kent, the maverick behind Boekenhoutskloof and many other ventures, including Chocolate Block, has quite a few stories up his sleeve as he has effectively been ‘growing up in public’ since his winemaking career started in 1994. There are a few allusions to being caught with ‘the naughty stuff’ and asked what the empty sacks of sugar are doing in the winery but most of this session under the watchful eye of Atkin, is pretty much family viewing.

After discussing 2015 and 2017 which were classic vintages in South Africa, discussion turns to 2019, the vintage we have come to taste. “People assume because South Africa is described as a Mediterranean climate that the vintages are consistent,” said Atkin, “but they are a real rollercoaster.” Kent explained that 2016-18 were the three drought vintages which were followed by plentiful rain and the reservoirs filling up for the first time in three years.

“2019 is an elegant vintage,” Kent explained, “We had good rains mid-February which helped the Cabs to ripen – there were the odd bit of botrytis and some rot problems around and people had forgotten how to deal with rain.”

“One winemaker who shall remain nameless said 2019 was the only vintage in 20 years that made him cry,” added Atkin, “you had fires in Elgin and Walker Bay, it was wet, with botrytis and uneven ripening in Stellenbosch the key was when you picked, the viticulture and how you sorted.”

The end result, though, is that 2019 a vintage that has produced elegant wines with a lot of definition. We’re tasting 5 wines kicking off with the first of two Semillons. 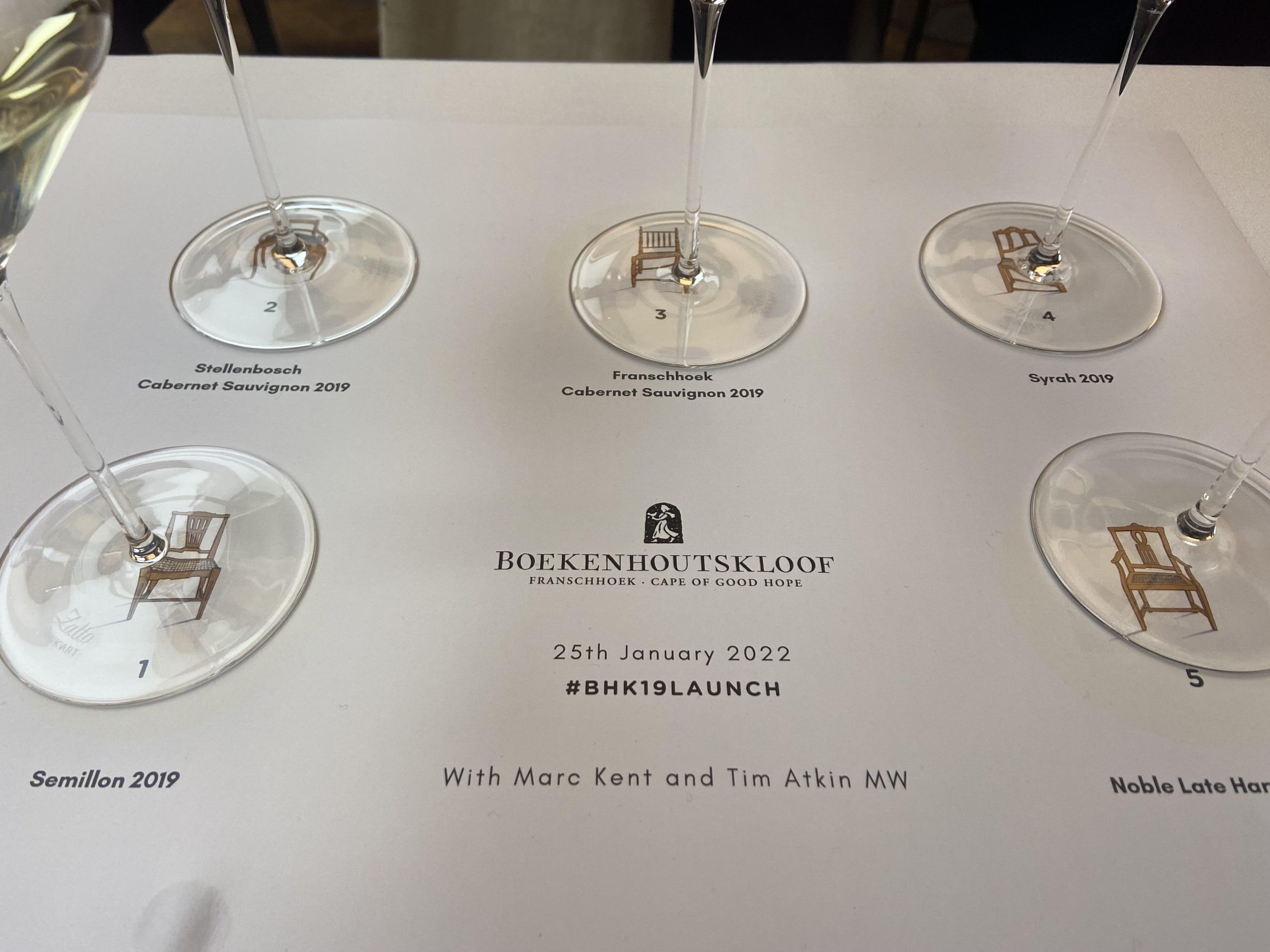 This tasting was prefaced with an observation by Atkin that “For the size of its plantings Semillon makes a lot of noise.” In the 19th Century Semillon was the most planted white grape in South Africa. Today it is almost marginal compared to other white varieties. Out of the 92,000 hectares under vine in South Africa 18.6% are taken up by Chenin Blanc, 10.7% by Sauvignon Blanc, 7.2% Chardonnay while Semillon is a lowly 1.1%.

For Boekenhoutskloof, 2019 was one of the estate’s earliest pickings of Semillon, the low yields and small berries facilitating wines of good concentration and structure. This wine is a blend of 97% Semillon with 3% Muscat d’Alexandrie, the Semillon sourced from three certified Franschhoek old vine sites, planted in 1902, 1936 and 1942. The fruit is whole bunch pressed and fermented in 225l barriques and concrete eggs. The wine is then matured for 14 months – 70% in new French oak barriques and 30% concrete eggs. The Muscat is picked early to reduce aromatic intensity and skin-fermented and matured in clay amphora.

This oxidative approach to vinification at low temperatures, enhances the textural elements of the grape and structure of the wine, and while the low temperature inhibits malolactic fermentation it also helps prevent Semillon absorbing oak flavours.

Medium straw-coloured, the wine has a well-defined, pure and pretty bouquet of tangerine, orange blossom and lime zest, the palate is concentrated, waxy, nicely balanced acidity and fruit ripeness with mandarin, lime marmalade, quince, almond paste and a hint of toast oak on the long and complex finish. 13.2% abv (£20.42) 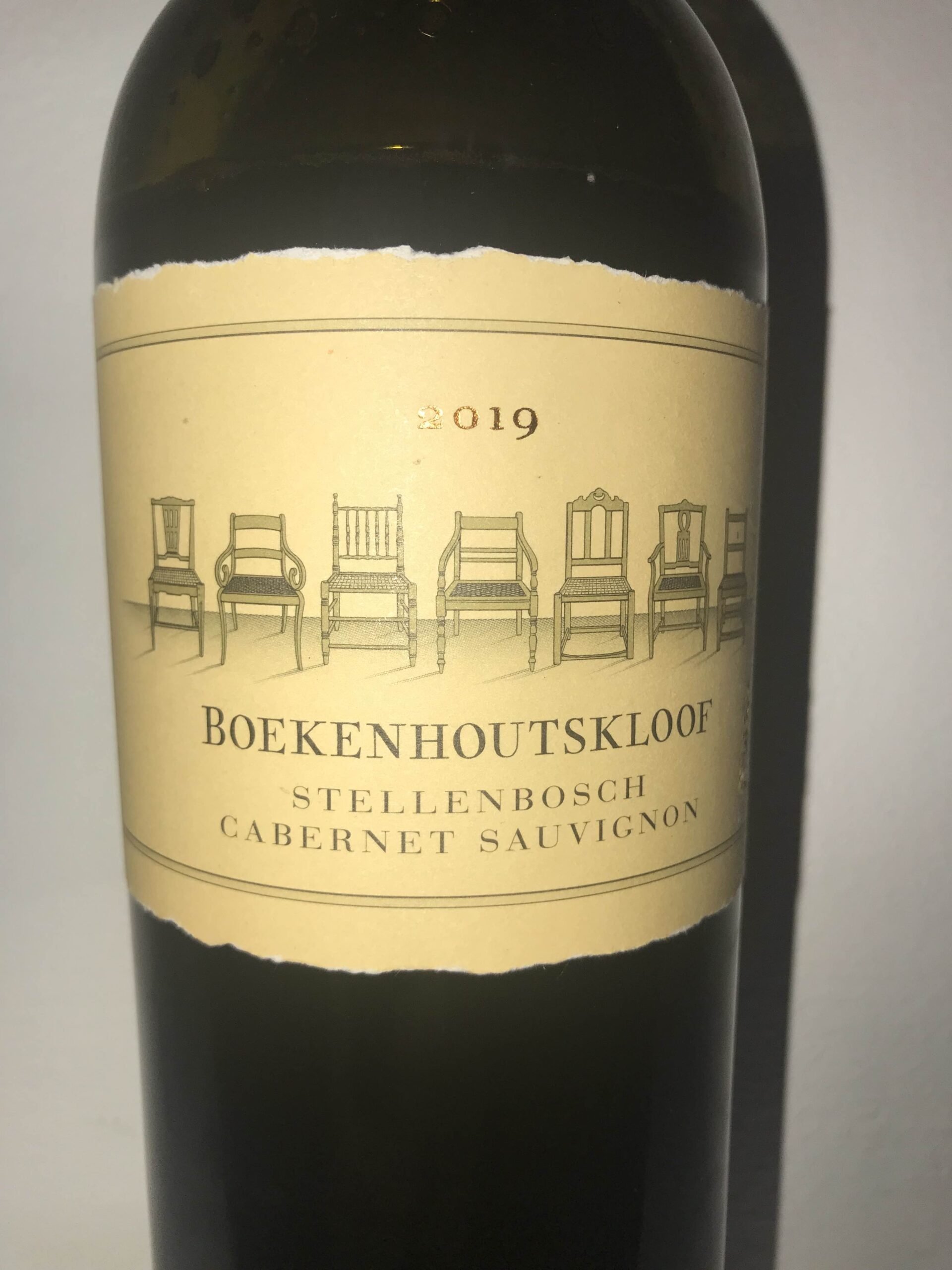 Only the sixth vintage of this classy blend of Cabernet Sauvignon from North-West-facing slopes of the Helderberg mountain and South-East-facing slopes of the Polkadraai Hills, with 10% Cabernet Franc. The estate’s knowledge of the sites and its implementation of state-of the-art vinification in its new winery is leading to smarter wines with great purity, Claret-like structure and elegance. The Helderberg has been described as the Pauillac of Cab Sauv in Stellenbosch, producing wines with slightly gripper tannins, richer profile and made for long ageing. The grapes are hand-harvested, cooled, destemmed and crushed in concrete tulip tanks. The wine is then aged for 22 months in 75% light toast 225l barriques, the wine has undergone malolactic.

This Cabernet Sauvignon blend is the older of the two cuvées from Boekenhoutskloof which has changed from being matured for 27 months in 100% new oak to 22 months in 80% new oak. 5% of Cabernet Franc has been added for freshness and a herbaceous fragrance. Like the Stellenbosch Cab Sauv the wine is fermented in concrete tulip vessels and then undergoes spontaneous malo in 80% new light toast French barriques. This is lighter and fresher in style, more austere overall than the Stellenbosch wine.

Medium ruby, the bouquet has bags of black fruit – blackberry, cassis – hints of tobacco, bay and black truffle with a floral perfume top note. The wine is structured with micro-fine tannins, fine acidity but fresher and lighter on entry, crushed blackcurrant berries and a dark chocolate, coconut skin note on the finish. 14.86% abv (£28.90)

This 100% Syrah is a blend of two sites – 90% coming from Porseleinberg and 10% Goldmine. The blend used to be 60/40% “Porseleinberg is the preferred site,” says Kent. But, as the sheer quality has been realised over the vintages so there is more Porseleinberg in there. The two sites are treated very differently in the winery too to differentiate this Syrah from a wine that now has a following of its own and, in the last vintage was Tim Atkin’s first-ever 100 point wine from South Africa. 2019 was the earliest ever picking of Swartland fruit, the dry conditions resulting in small compact berries, with low yields, lower alcohol and elegant perfumed fruit.

The fruit was cooled, fermented in concrete tulips, partrially de-stemmed with 60% whole bunch. The skins were basket pressed into 2500 litre Austrian oak foudres and 600 litre demi-muids (Goldmine fruit) where the wine was matured  for 18 months.

Medium purple, the perfume jumps out of the glass with floral and incense notes giving a real lift to the mulberry and black cherry; the palate is on the light end of medium bodied, so accessible and fresh, with silky-smooth tannins and a structure that feels effortless and composed. 13.95% abv. (£28.90)

A 100% Semillon sweet wine made from vines planted in 1997 specifically to make this wine on deep alluvial soils by the Franschhoek river, (“more of a stream” says Kent). 2018 was a dry vintage so not great for botrytis, however several passes managed to pick enough fruit. Whole bunches are basket pressed and fermented for 5-7 weeks in three first-fill Chateaux barriques, the wine then matured on its gross lees for 30 months. Kent says the first time he made this wine in the 2001 vintage there was 400 g/l of residual sugar, now it is made to a Barsac-style (lemon meringue) with the RS clocking in at 135.5 g/l.

Deep yellow, the nose has honeyed apricots, honey, quince and hint of vanilla; the palate is oleaginous, ripe and seductive with tinned peaches offset by a line of lime acidity and oak texture. 10.85% abv. £15.12 (37.5 cl)