Louis Latour Agencies took to the Thames this year for its annual portfolio tasting, hosting it on the Dixie Queen on Butler’s Wharf Pier. For Justin Keay it was a first visit to this event and an opportunity to taste through the range of Louis Latour 2020 Burgundies, and wines from a wide range of other countries including Australia, New Zealand, Chile, South Africa and Italy, along with the other French regions of the Loire, Rhône, Champagne and Cognac.

Louis Latour Agencies took to the Thames this year for its annual portfolio tasting, hosting it on the Dixie Queen on Butler’s Wharf Pier. For Justin Keay it was a first visit to this event and an opportunity to taste through the range of Louis Latour 2020 Burgundies, and wines from a wide range of other countries including Australia, New Zealand, Chile, South Africa and Italy, along with the other French regions of the Loire, Rhône, Champagne and Cognac.

“That said, there are some great wines here, especially from the New World, which will form a good foundation for an expanded portfolio,” writes Keay.

It isn’t often that one’s journey to a tasting sets the tone for the event itself but it did for me with Louis Latour Agencies’ annual tasting, which this year was held on boat moored at Butlers Wharf by Tower Bridge. After checking transport options from my place in Battersea, I jumped on a fancy Thames Clipper direct from the power station to Tower Bridge. A sunny day, a 30 minute cruise past Westminster and the City, London has never looked better. And I’m happy to say the LLA portfolio was a good match for my mood. Even better I could ascribe any lurches to the rolling of the Thames rather than to wine, although controlled numbers at this Covid-secure event reduced the risk of bumping into anyone involuntarily.

“Ach, you’ll find your sea legs soon enough,” said a fellow taster, and indeed I did, helped first by tasting the four NV wines shown by Champagne Gosset, the Extra Brut, the Grand Reserve, the Grand Blanc de Blancs, and my favourite of the bunch, the Grand Rosé Brut. All excellent, the last had for me a wonderful richness, with nice primary red fruit showcased in a fine mousse with piercing acidity. A food wine to be sure and an enjoyable start.

This was my first LLA tasting, and I’ll freely admit I arrived armed with preconceptions. Although LLA was established in 1990 as the UK arm of famed Burgundy négociant Louis Latour and represents 14 family-owned producers from across the world, the traditional Burgundy négociant business looms large in my imagination. So, rather than fight it, I kicked off my tasting by investigating a preview of the 2020s from the region. 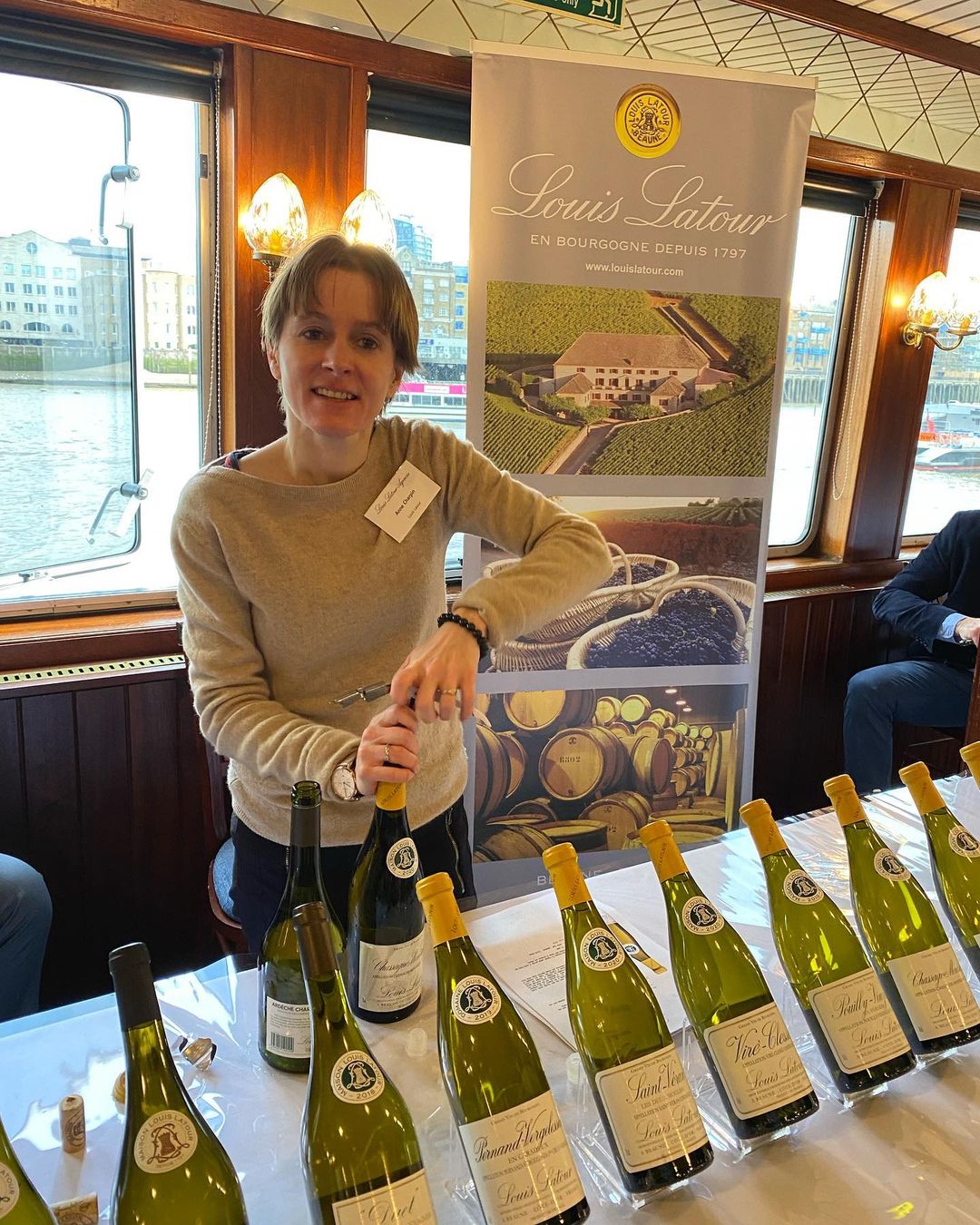 And what a treat they are. On this website and elsewhere, 2020 has already acquired a reputation as a full, forward vintage with Burgundy demonstrating – like so many other places – that climate change really is happening thing. Many producers concerned at retaining the balance and freshness of their wines, started harvesting in mid to late August – almost unheard of. However some alcohol and ripeness levels are still considerable; at the Davy’s Wine Merchants tasting a few weeks ago, I tasted my first ever 15.5% Burgundy, a foretaste of the warming future, and inevitably, changing styles for a region once defined by precision and lower ripeness.

“I’d call this a winemakers vintage – you had to be quite agile and bunch-selective to make great wines in 2020, given the summer heat but also the adverse weather earlier in the year,” says Guy Nightingale, LLA’s regional account manager, who says sales have been very good despite higher prices because of lower yields, particularly amongst the Pinots.

No mega-high alcohol levels here but some great wines, many already up-and-ready to be drunk just months after bottling. Three of the range make my list.

First off, a rarity – a white Beaune, Premier Cru Cras (£33.95) – surprisingly aromatic and fruit-forward but supported by wonderful acidity. Really rather appealing. The Puligny-Montrachet Garenne (£63.22) was another pleasingly ripe white, slightly smoky but great primary fruit showing through. Tasting great already but will show even more in a year or so. Amongst reds the Clos Vougeot Grand Cru was up and running showing lots of fruit, good balanced oak and acidity and will evolve wonderfully- as you might reasonably expect for £207.48. Much better value would be the Vosne-Romanee Premier Cru Los Suchots (£96.91) which almost blew me and other tasters off our feet (OK, I may have lurched a little) – considering this is a 2020, this was full-on ready to drink already, lots of red and dark fruit supported by lightly matured oak. Already a great Pinot.

Time to explore LLA beyond its home region, I felt. Rather like fellow wine importer Fells, and also maybe Gonzalez Byass UK, LLA sees its role beyond its original core remit in representing often family-run wineries that share its commitment to quality, tradition and value. My next two stops, at Domaine Michel Redde from Pouilly-sur-Loire and Vidal-Fleury from the Rhône were perfect examples of this, each showing a great representative range and offering good value.

From the former, my choices were the soon-to-be-released Pouilly-Fumé Les Bois de St. Anderlain 2020 and the Pouilly-Fumé Les Champs des Billions 2020, wonderfully expressive but also quite uncharacteristic takes on Loire Sauvignon Blanc, quite savoury but also quite citrus, made from old vines with the two wines showing very different styles from their respective vineyards. Sauvignon Blanc as it should be.

I pretty much loved all Vidal-Fleury’s range not least because, although originating in the northern Rhône, they make wine in appellations all along the river, including a cuvée with fruit grown in vineyards at each end, the ageworthy Côte-Rôtie Brune et Blonde 2018 (£41.97).

“We’ve been producing since 1781 which makes us the oldest uninterrupted wine producer in the region, “ says spokeswoman Sophie Rath, adding that volume is now around one million bottles with the winery active in most of the Rhône’s 20 appellations. 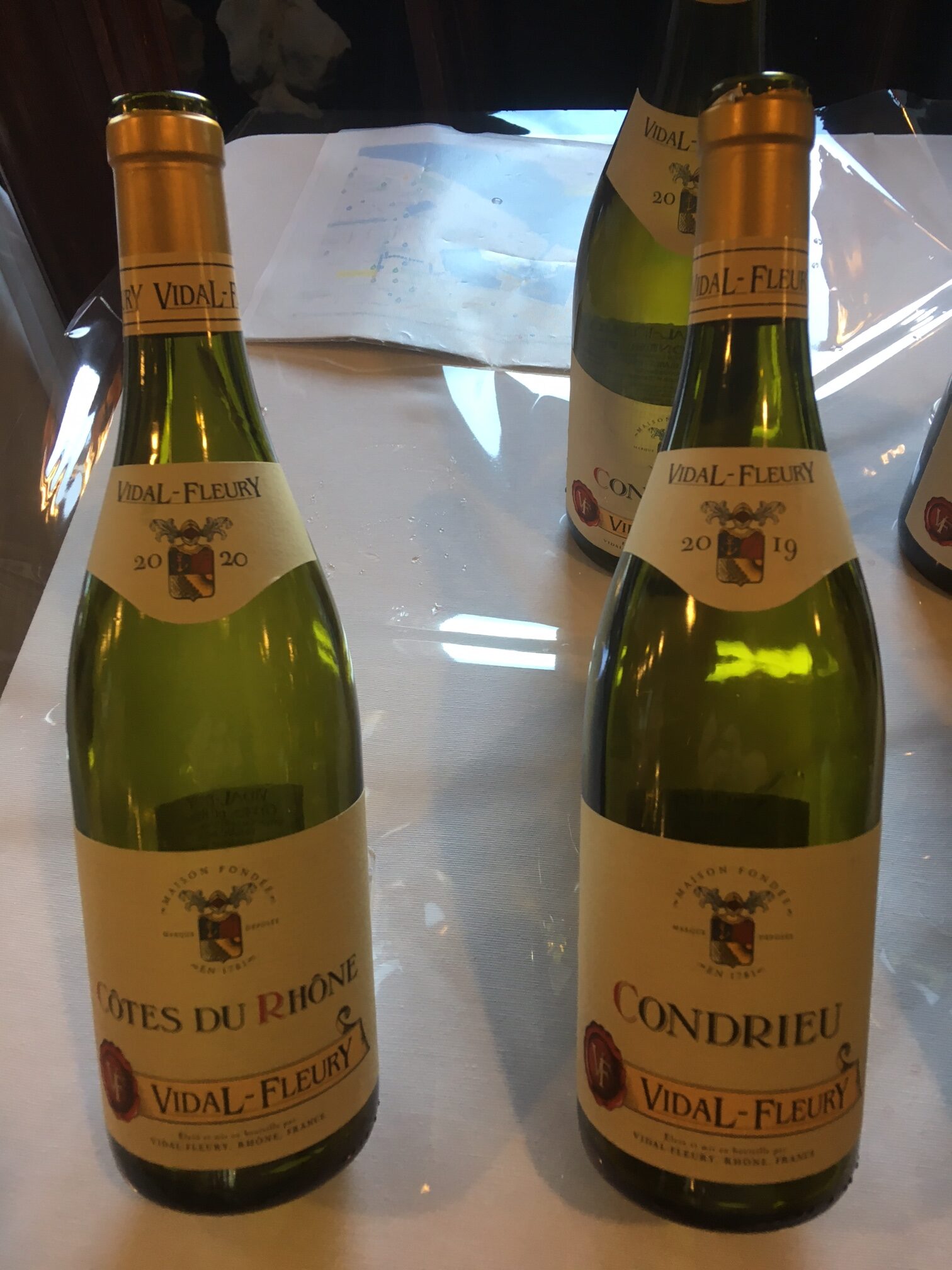 Of the three wines that stood out for me, the Côtes du Rhône Blanc 2020 (88% Viognier, 12% Grenache Blanc, £9.62), was amazingly expressive; unoaked, it showed great fruit and balance and with 14% alcohol, wasn’t shy either. The Condrieu 2019 (£32.48) was delicious; 50% oaked it shows all the rich-rounded flavours you’d expect from this northern Rhône icon. And I loved the Saint-Joseph Rouge 2019, again very good value at just £18.63; lots of leather, smoke and animal notes here reflecting the appellation’s granitic soil.

Beyond France, the LLA strategy seems to be mainly one agency per country, so Banfi ‘represents’ Italy; Viu Manent, Chile; Pyramid Valley and related négociant Smith & Sheth, New Zealand; whilst Morgenhof Estate and Isonto, LLA’s own entry level range, represent South Africa. Perhaps because of its size, LLA has two agencies from Australia, Wakefield from SA’s Clare Valley and McHenry Hohnen from WA’s Margaret River. With time running away from me, I lurched over to the port side of the boat to taste a selection. 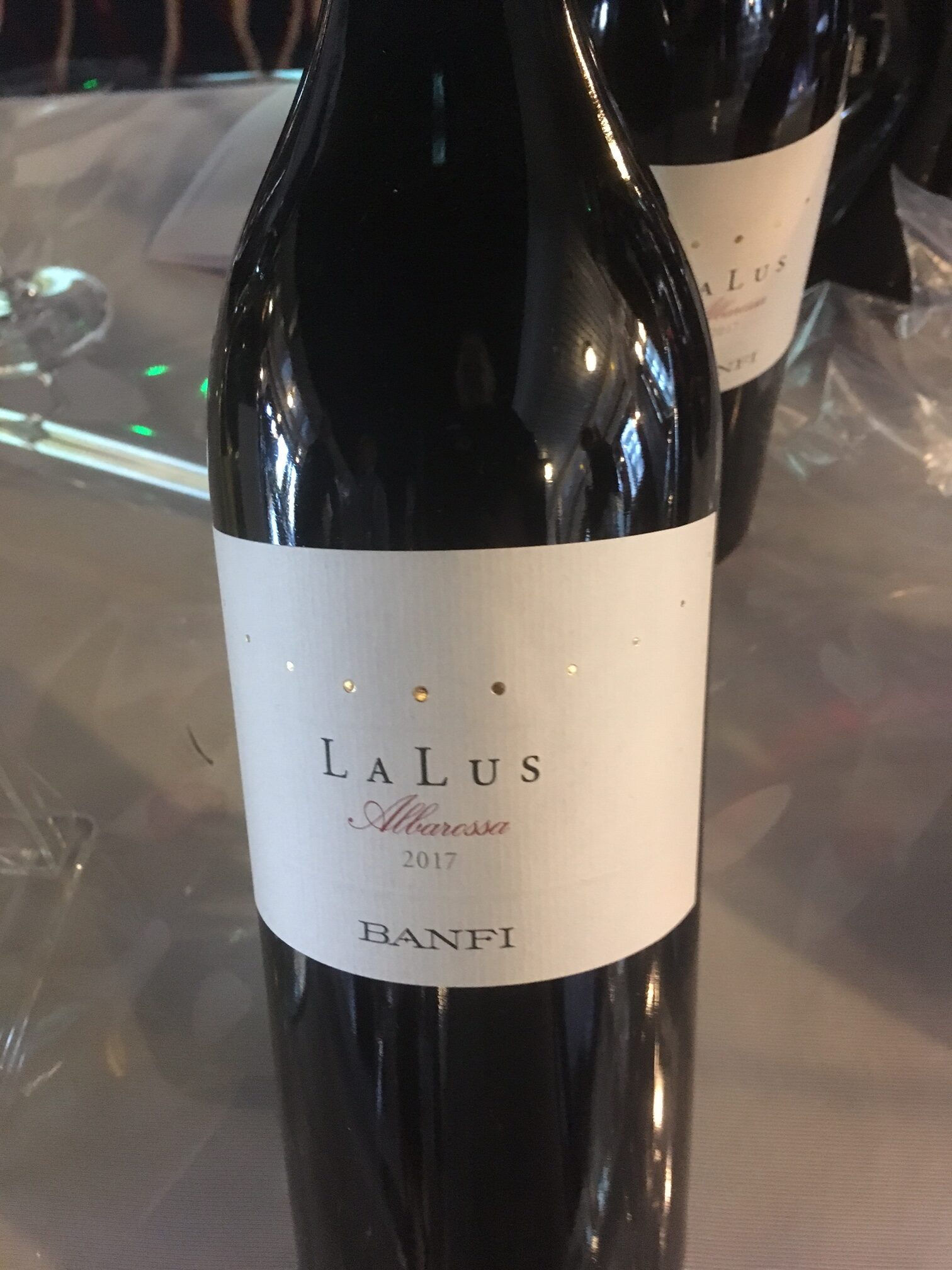 Banfi was showing wines from its native Tuscany but also from Piedmont and much as I love Banfi Brunello di Montalcino – especially the Poggio alle Mura and Poggio alle Mura Riserva, here 2016 and 2015 – in this environment, these very food-needy wines felt mega-tannic and austere. I had much more luck with Banfi’s Toscana IGTs Summus and Excelsus, both 2017 – the former a full-on 15.5% Sangiovese/Cab Sav/Syrah blend, the latter a more rounded, meaty Merlot. But the real joy was from Piedmont, the pretty sweet (100 g/l residual sugar) but incredibly tasty and refreshing Rosa Regale: just 7% alcohol, made from the ancient variety Brachetto d’Acqui, this was one of the most moreish wines I’ve had for ages. And very good value at just £12.58.

From Australia’s McHenry Hohnen – family-owned and biodynamic for more than a decade since its founding in 2004 – the partly oaked, surprisingly complex Tiger Country Tempranillo 2015 was a joy, full-on, with lots of dark red fruit and soft tannins (£15.43) whilst Rolling Stone 2014 (£34.96) a classic Bordeaux blend including 38% Cab Sav, equal amounts Malbec and Merlot and 12% Petit Verdot, was also very appealing, lots of red berry and dark cherry fruit, with a long and interesting life ahead of it. 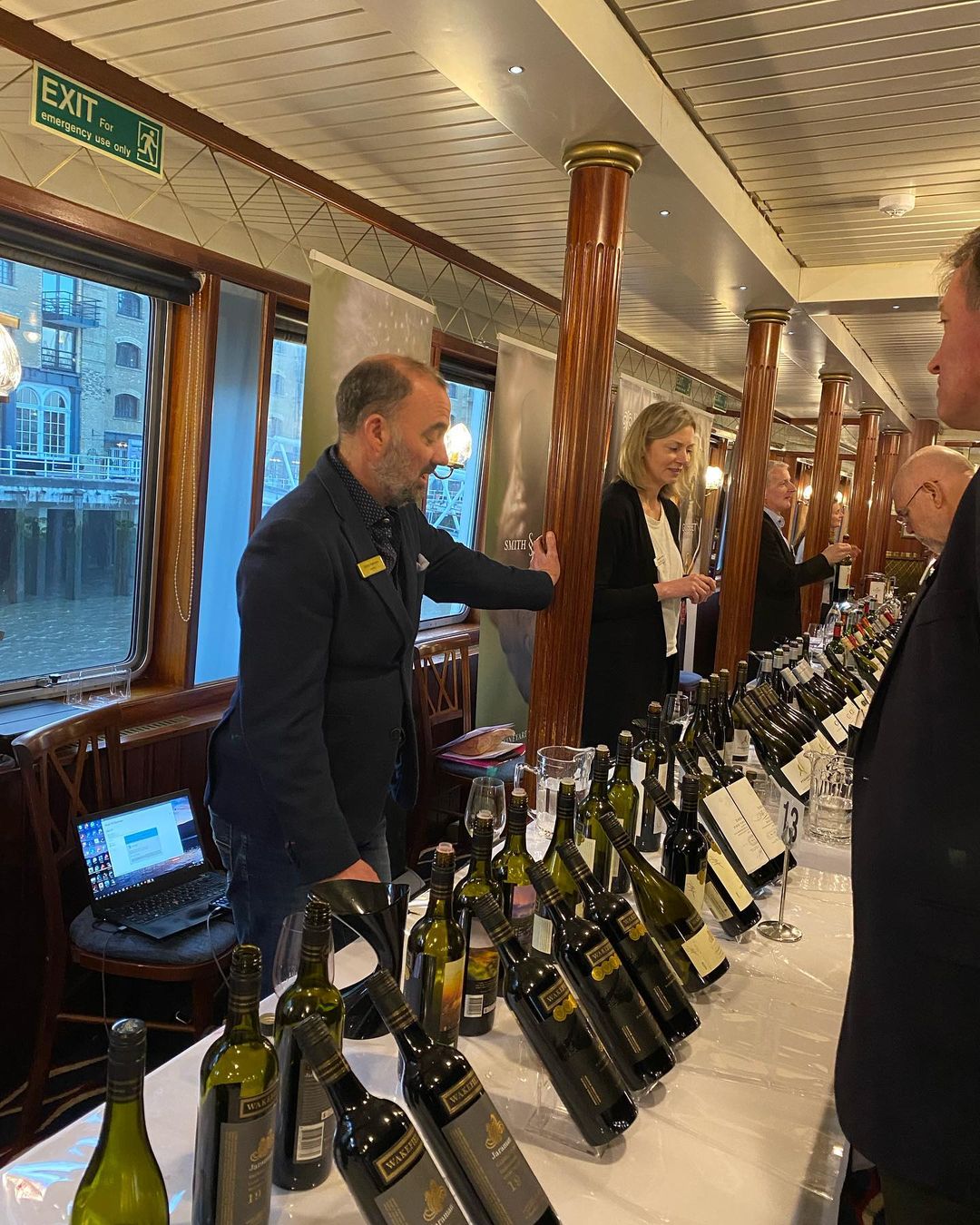 Wakefield, as ever, showed a good solid range with a strong focus on the traditional French varieties; my favourites were two new releases, The Visionary Cabernet Sauvignon 2015 and The Pioneer Shiraz 2015 (both £53.46) both showing full flavours and great structure, with considerable evolution ahead for both.

And finally, Chile. One of the long thin country’s oldest producers Viu Manent will turn 87 this year. It has become one of Chile’s more innovative producers, so much so that in 2017 Wines of Chile gave it the Winery of the Year award. I tried three of the wines, the Secret de Viu Manent Carmenere 2020, the Secret de Viu Manent Viognier 2018 (both £9.23) and Viu Manent Tiny Trails Chardonnay 2020 (£12.47). Despite both carrying the moniker Gran Reserva, the first two were unoaked, quite simple wines giving good varietal expression, very young, the Carmenere will gather more complexity with time. The Chardonnay is made from young wines located not far from the Pacific and is much more complex, with vanilla and toasty light oak supporting good fruit, lychee and pear evident on the palate. Very elegant and well made.

So as I cruised back to Battersea, I asked myself, if the tasting had been a football match between France and the rest of the world, who would have won? I would hand clear victory to the French because of the strength of some of their big players but also because of significant gaps in the other side. Argentina, Iberia, the US, Germany and emerging Europe are all absent, to name but a few. That said, there are some great wines here, especially from the New World, which will form a good foundation for an expanded portfolio, whenever that happens. Something to look forward to perhaps, and we all need that.

Louis Latour Agencies is a supplier partner of The Buyer. To find out more about them click here.

How Enotria&Coe freshened its portfolio with 5 new agencies