More than any other grape variety, Furmint is on a journey, argues Justin Keay. With an amazing ability to reflect terroir, Furmint is breaking out of its Tokaj home in Hungary and spreading to other regions with single vineyard wines and dry varieties, in particular, reflecting these regional differences. And, despite its phenolics not making it an obvious choice for sparkling cuvées, Furmint fizz is very much a new thing, with winemakers learning as they go. Keay attends the fourth Furmint February tasting in London, talks to the 38 producers in attendance, and lists his Top 10 wines from the event – five sparkling and five still single vineyard wines.

More than any other grape variety, Furmint is on a journey, argues Justin Keay. With an amazing ability to reflect terroir, Furmint is breaking out of its Tokaj home in Hungary and spreading to other regions with single vineyard wines and dry varieties, in particular, reflecting these regional differences. And, despite its phenolics not making it an obvious choice for sparkling cuvées, Furmint fizz is very much a new thing, with winemakers learning as they go. Keay attends the fourth Furmint February tasting in London, talks to the 38 producers in attendance, and lists his Top 10 wines from the event – five sparkling and five still single vineyard wines.

“Regional differences are emerging too. Though Tokaji is Furmint’s home, other regions are making good wines out of it too including producers in Somlo, the north of Lake Balaton (Badascony) and Eger,” writes Keay.

Like so many things put forward by our mendacious excuse for a prime minister, this “getting back to normal” lark really isn’t all it’s cracked up to be. On the Monday morning Boris Johnson was giving his “time to live with Covid” speech (with our poor Queen laid up with it at Windsor Castle) I was making my way through the near-empty streets of the City to this year’s Furmint February tasting – 4th edition, no less. Walking past closed cafes and shops on Threadneedle Street I had the sense that this was the real new normal, with the few people around acting like extras from the zombie movie 28 Days Later.

Inside Merchant Taylor’s Hall things were very different. Although Wines of Hungary UK had sought to ease overcrowding by having two sessions, this was a well attended tasting with many winemakers over from Hungary. Given that winemakers at UK trade tastings have been so scarce in recent months, this was the latest evidence for me that the wine trade is now fighting back having been ‘knocked for six’ by the pandemic, the costly absurdity of Brexit and controversial changes to excise duties.

And with Furmint February 2022, Wines of Hungary UK seems keen to make up for time lost to the pandemic. London saw 38 producers in attendance (most though not all from Tokaj, Furmint’s home); the tasting held two days later in Edinburgh – a first, to allow the Scots a first-hand taste of Hungary’s most famous white variety – saw 22 producers in attendance.

And with good reason. As it has modernised and improved – without losing the price advantage given by Hungary retaining the Forint rather than joining the Euro – Hungarian wine is on a roll, as winemakers experiment with more of the 178 different grape varieties grown here.

Caroline Gilby MW says the UK is now Hungary’s number one market for bottled wine. Although much of this is inexpensive stuff – think I Heart Pinot Grigio etc – consumer awareness of indigenous varieties is growing, not just of Furmint but of Hungary’s most planted variety (red Kekfrankos/aka Blaufrankisch/Frankovka/Lemberger) and lesser known grapes like Kadarka and Harslevelu. And almost every decent UK importer now has at least one Furmint on their list, often alongside other Hungarian wines.

Furmint is not a particularly aromatic variety – especially in Tokaj – and often shows characteristics of apple, pear and quince. However it can have a bracing and almost fiery acidity and it is versatile. According to Gilby, it also has an amazing ability to reflect terroir, particularly in Hungary’s volcanic soil, which was why she highlighted single vineyard wines at her London Masterclass.

“I wanted to drill down and look at what individual winemakers were doing in their vineyards. Hungary has 418 different cru, with 52 defined as first class – but even within individual cru there can be wildly different soils and bedrock,” she says.

Not to mention vines, the age of which can vary wildly, ranging from relatively newly planted to the seriously historic, like the bush vines of Istvan Szepsy, which date from 1936.

More than any other variety I can think of, Furmint is on a journey. Around 20 years ago, the very concept of a dry Furmint was novel: for most wine drinkers, this was the main variety for sweet wine (Tokaji Aszu and Szamorodni) and many dry Furmints used to be nothing to write home about. But now, in 2022, with dry Furmint very much a thing, it is continuing to evolve; with more producers seeking expression through single vineyard wines as well as their main cuvées.

Regional differences are emerging too. Though Tokaji is Furmint’s home, other regions are making good wines out of it too including producers in Somlo, the north of Lake Balaton (Badascony) and Eger. As a generalisation, my sense is that outside Tokaji Furmint can take on a rounder, more generous and less linear character, which is great if you find some of the classic Tokaji wines too austere.

Many producers are now also making sparkling Furmint, something not in evidence at all at the last physical Furmint February tasting I attended, just before Covid struck in early 2020.

So with sparkling wine increasingly popular these days, especially with millennials, could it now be ‘a thing’? FurFizz perhaps? Or FizzFur?

Well maybe, but the quality of what I tasted was quite variable – clearly the learning process here continues, as Dr Orsi Szentkiralyi suggests.

“With demand for sparkling wine high here and in Hungary, there has been a bit of bandwagon effect which is problematic because Furmint is a phenolic variety and therefore not an obvious choice for sparkling wine. Producers are very much learning as they go, which is great to see but for some these are baby steps. Making sparkling wine is complex and it takes at least 20 years for a region to consolidate a great reputation for it,” she says.

So what were my top choices from the tasting? 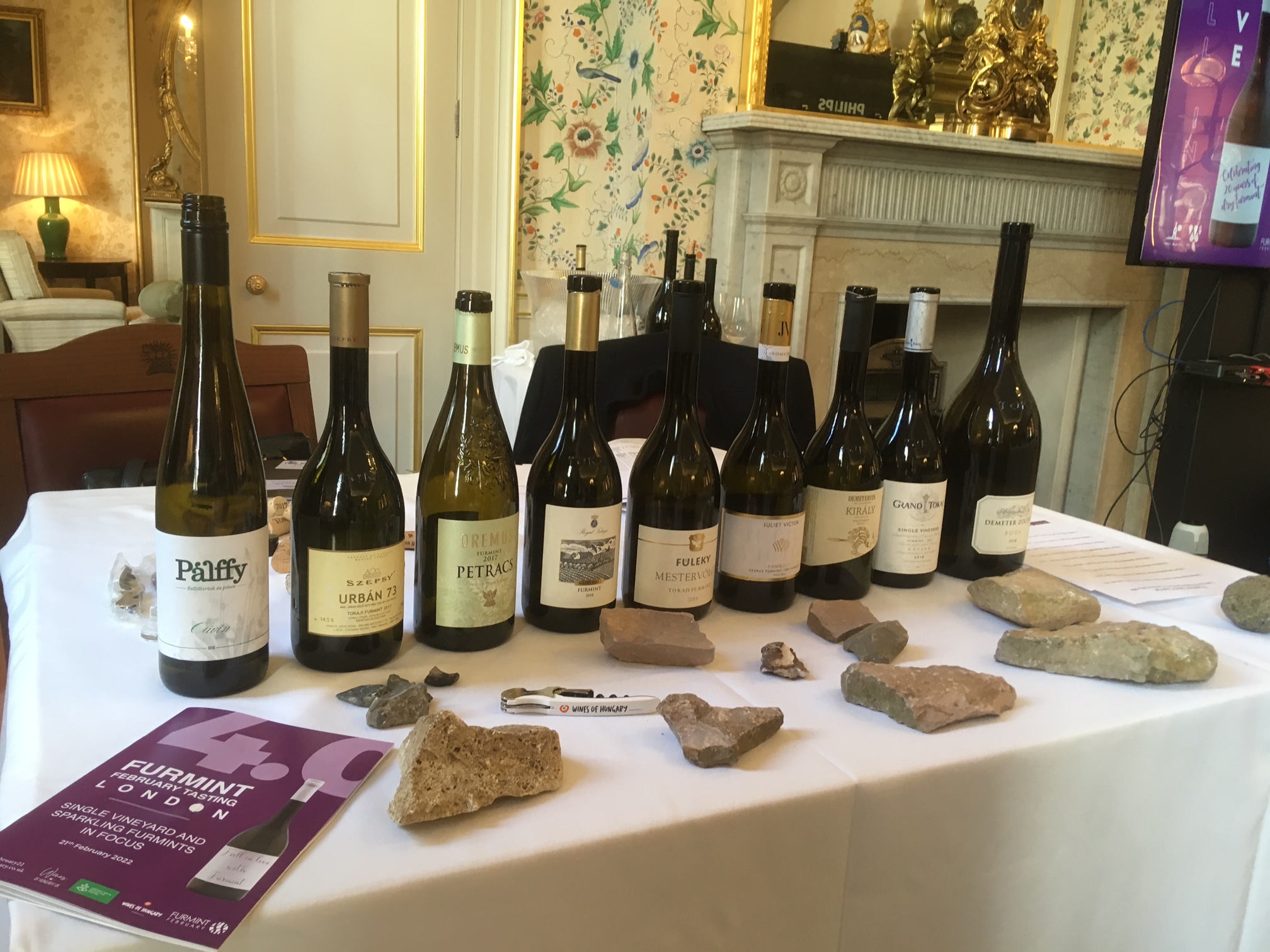 At 13.5% this was one of the stronger wines shown at the masterclass, but also one of the more intriguing with great length and complexity, good fruit/acidity balance and some smokiness on the palate. Recommended. (Amathus Drinks)

Generous alcohol – 14.5% compared to the 12-12.5% more typical of Tokaji – this is made on what Gilby calls “possibly the most complex volcanic soils in the world” from a hilltop plot (73). It shows in a delicious, nuanced wine very much at the start of what should be a long life. Rich and concentrated, this has great length.  (Top Selection)

The Olivin vineyard has magnesium silicate soil and this is reflected in a wine that was completely different from the others shown. Quite dry but not excessively so, this has a broad and generous palate, quite fruit forward, showing the flexibility of Furmint.  13%. (Unrepresented in UK) 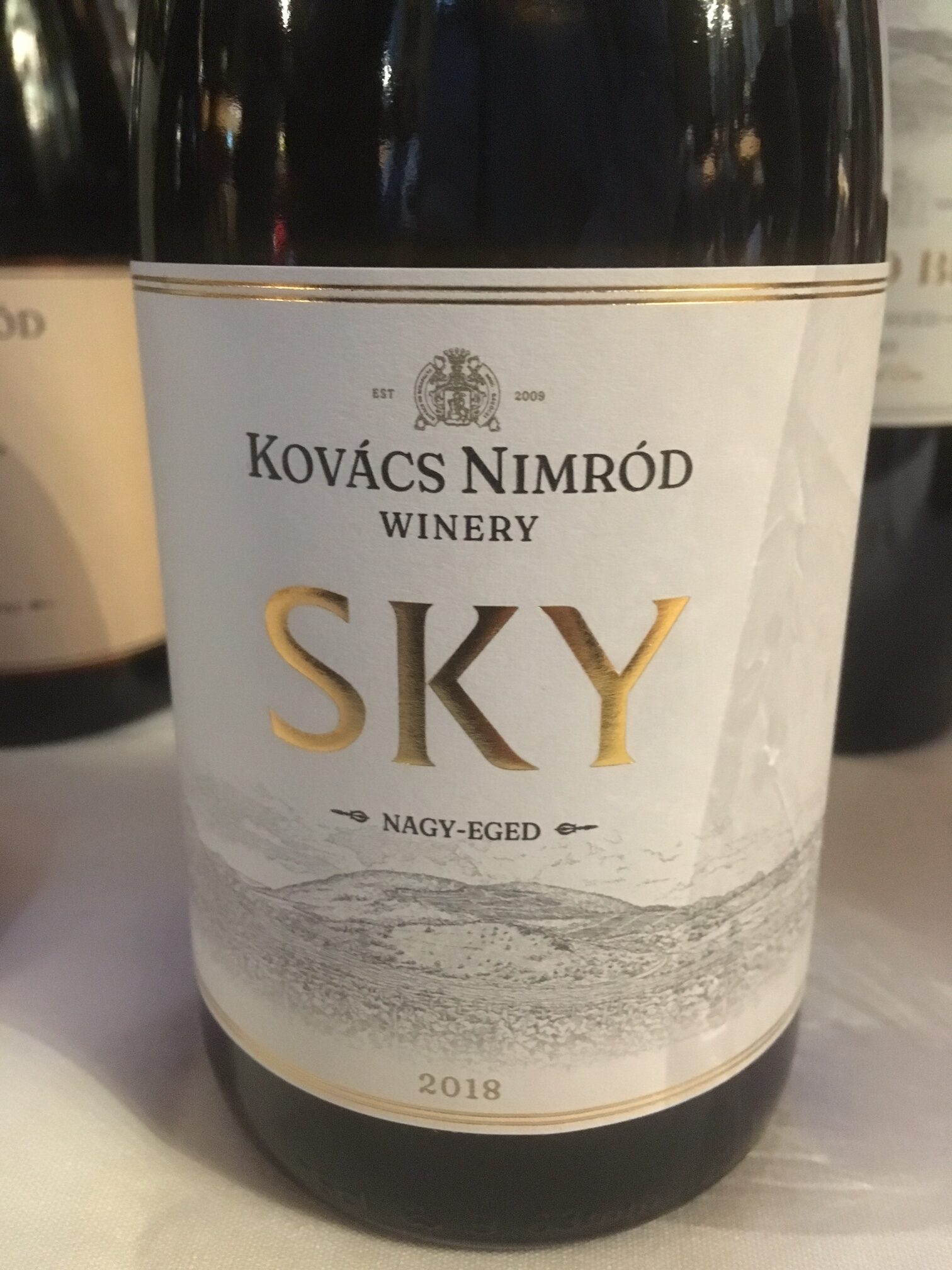 Nimrod is proud of this wine – given how little Furmint his winery actually produces (typically just 3000 bottles – and of his granddaughter after whom it is named: her photo is the screensaver on his phone. He was showing two vintages of this, 2018 and 2019, and the last was really singing: quite fruit forward and broad, this is at the Chardonnay-style end of the Furmint, quite rounded, with judicious use of oak supporting the fruit. Very good, but also at 14.5%, one of the most alcoholic wines I tasted (at 15.5%, the Sky 2018 was the strongest). (Boutinot)

Gilby showed this producers 2017 single estate wine from the Bomboly vineyard but for me this wine pipped it to the post, lots of character with pear, apple and quince all detectable on the palate. Located in the heart of Tokaji, in the village of Mad, it frankly seems mad that this winery is just six years old. Very confident and well made wine, from a prime vineyard. 13.5% (Bancroft Wines)

The only sparkling wine made in the tank method, this wine from 4 Houses is wonderfully fresh, off dry, lots of apple and quince flavours supported by restrained acidity. Mega refreshing. Joy in a glass. (Wanderlust Wines)

With 9 g/l of RS this felt rather more generous and rounded than some of the other sparklers I tasted but that may also reflect that spent 24 months on the lees and is only 12% Furmint – the rest of the wine is Harslevelu, suggesting that once Hungarian winemakers get a grip on sparkling wine, mixing Furmint with oher varieties may be the way to go (Chardonnay featured in one or two of the wines I tasted). (Wanderlust Wines)

This rich, moreish and characterful wine had 54 months on its lees before release, and the result is a rounded drink with some tropical flavours and vanilla notes. Some Harslevelu is also in the mix here. (Enotria & Coe) 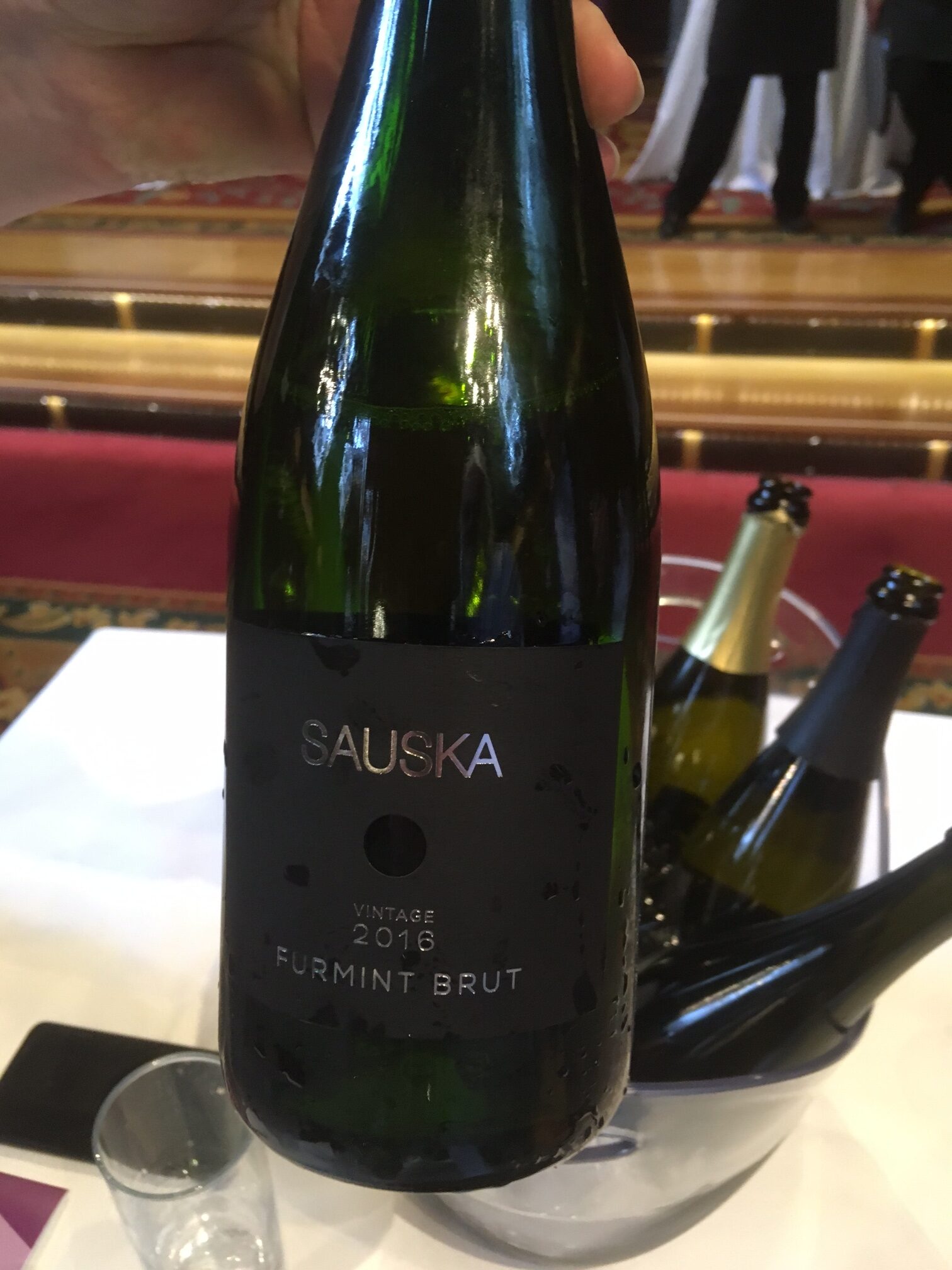 Sauska’s NV Brut was shown in the masterclass but for me this was the traditional method sparkling star of the tasting, showing how well Furmint can behave as a sparkling wine when in the right hands. Made in very small volumes, this is really expressive with good though not excessive acidity. Really moreish. (Enotria & Coe)

If you are looking for youthful exuberance and enthusiasm from a young team determined to make wine more accessible, look no further: this 100% organic wine from a producer committed to biodiversity and sustainability is great, the decision to make it from 50/50 Furmint/Harslevelu also clearly the right one. Generous and nuanced, like their still wines, this deserves a wider audience. (Unrepresented in UK) 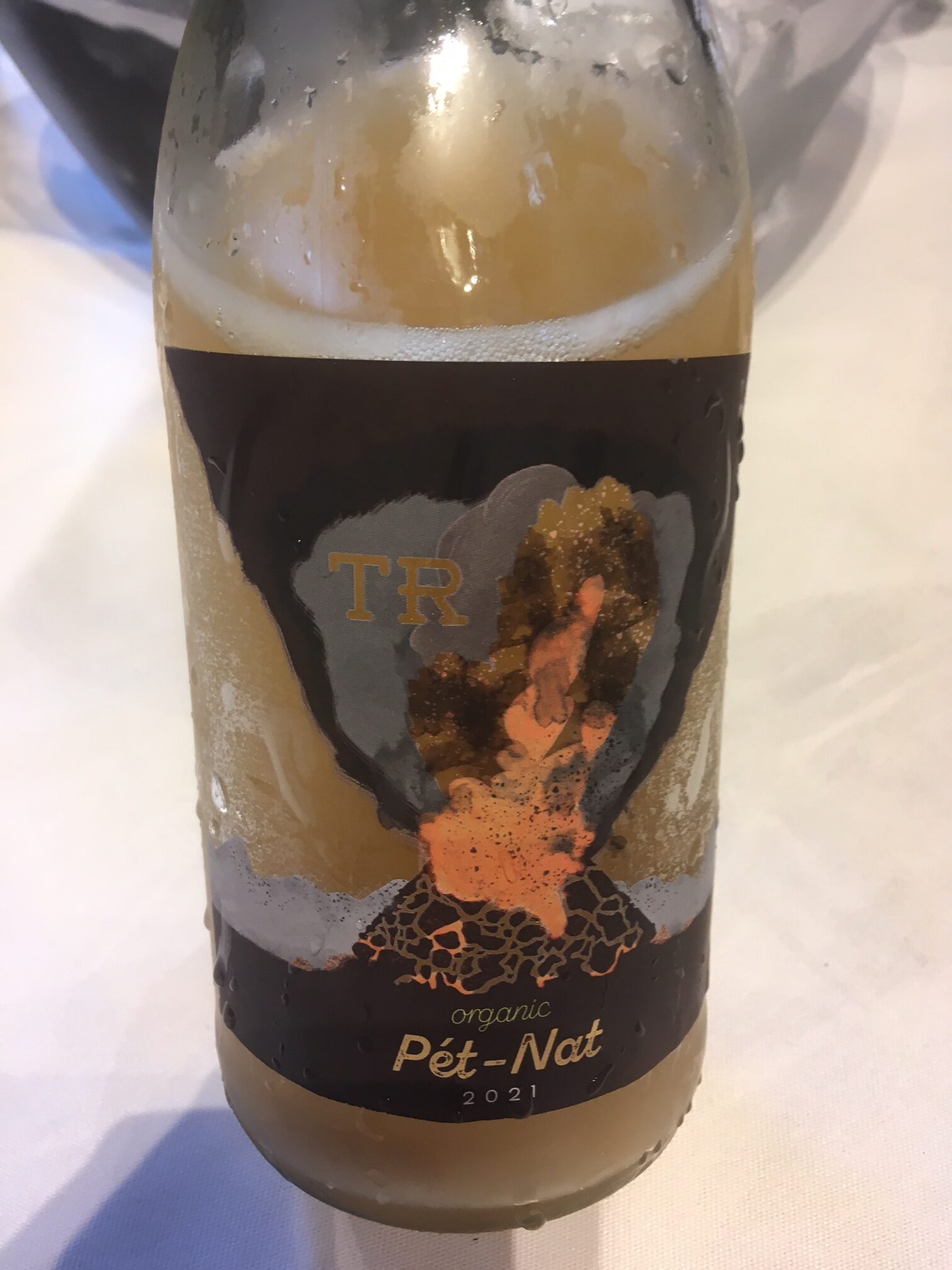 Despite it being Furmint February quite a few Tokaj winemakers I spoke to felt it was ‘their grape’ – rather than its’ most famous variety – that should be getting all the publicity. You can see their point I suppose: this is Hungary’s most historic wine region, and almost everyone has heard of Tokaji Aszu wine. As if to prove the point, one exhibitor Best of Hungary had a range of products showing the many, many uses Furmint is being put to in its famous home. Tokaji-infused raisin bonbons; wine jelly; even hand cream made with Tokaji wine extract.

Impressive, I thought. There really is no stopping Tokaji/Furmint these days.