Freshness, elegance and novelty are just three reasons why New York Cabernet Franc is making a big impression on wine lovers both in the US and UK, says Justin Keay, who talks to winemakers from the two main New York wine regions of Finger Lakes and Long Island. He also Zooms in for an Oz Clarke-hosted tasting ‘face-off’ between three New York Cabernet Franc producers and three from other wine regions, including the Loire and South Africa to discover why this particular variety is so on-trend and such an important grape for the future.

Freshness, elegance and novelty are just three reasons why New York Cabernet Franc is making a big impression on wine lovers both in the US and UK, says Justin Keay, who talks to winemakers from the two main New York wine regions of Finger Lakes and Long Island. He also Zooms in for an Oz Clarke-hosted tasting ‘face-off’ between three New York Cabernet Franc producers and three from other wine regions, including the Loire and South Africa to discover why this particular variety is so on-trend and such an important grape for the future.

“As the world warms, it is now being recognised that Cabernet Franc can actually make more delicious wines than Cabernet Sauvignon or Merlot. It holds onto its acids better than the former and is better able to reflect its varietal character than the latter,” says Oz Clarke about the success of New York Cabernet Franc.

What springs to mind when you think of New York State, and wine? Large diurnal temperature differences? A short but intense growing season, with inland areas in particular seeing very, very cold winter temperatures after occasionally searing summer ones? Unusual hybrid varieties specially designed to withstand the extremes of weather? Riesling perhaps, which has been at the forefront of New York state’s so far limited but fast growing presence in the UK on-trade?

You’d be right on the money with all these observations but there’s one important thing missing from this picture, a variety that appears almost as an ‘also ran’ even in the New York Wine and Grape Federation’s listings of varieties planted there. And that is…Cabernet Franc, a grape generally associated – in my mind as least – with its original home, the Loire, Hungary, and with New World producers in places like South Africa and Argentina (DV Catena’s Tinto Historico’s Cabernet Franc 2018 is a personal favourite).

Why New York Cabernet Franc is making a big splash

But start sharing the news – Cabernet Franc is making a serious splash in two of New York State’s highest profile wine regions first, because of its ability to withstand extreme temperatures, second because of exploding demand.

“Cab Franc is the single grape that unites all New York’s wine regions especially Finger Lakes and Long Island, two very different regions four hours drive apart, with distinct weather patterns (the former is more continental, the latter maritime – surrounded as it is by water). It has much more winter hardiness and does better in cool climes than its Bordeaux brethren,” says Kelby Russell, winemaker at Red Newt, one of the 124 Finger Lake wineries. (imported by Treasury Wine Estates).

Indeed. Winemakers still talk of the Big Freeze some years ago when inland New York temperatures dropped below -30°C, yet more than half the planted Cabernet Franc vines survived, suggesting this is one of the hardiest of the vitis vinifera varieties.

But the real key driver behind Cabernet Franc’s impact has been demand. Russell and others say that winemakers and consumers are only now really beginning to wake up to the potential of the variety, until recently seen as somehow inferior to Cabernet Sauvignon and Merlot, of which it is a parent, and in Bordeaux and other regions has suffered the indignity of seeing its vines ripped up for its better known kin.

A variety of Cab Franc styles

“The best thing about it is that you can make such an incredible variety of styles from it, all very expressive of the site from which the grapes come,” Russell adds, suggesting that the general Finger Lakes style tends towards the light and crunchy (eschewing, I might say, the more full-bodied style this region could manage: just over the border in Canada’s Niagara River QVA, the Two Sisters Vineyard makes a meaty full on 14% Cab Franc more suggestive of Napa or Barossa than Finger Lakes).

Russell’s own Red Newt Cabernet Franc 2018, though, is a great example of this lighter, more approachable style. It has bright red fruit, with a savouriness and minerality that rather suggests cru Beaujolas in style, with medium weight and just 12.5% alcohol it’s very much on-trend. 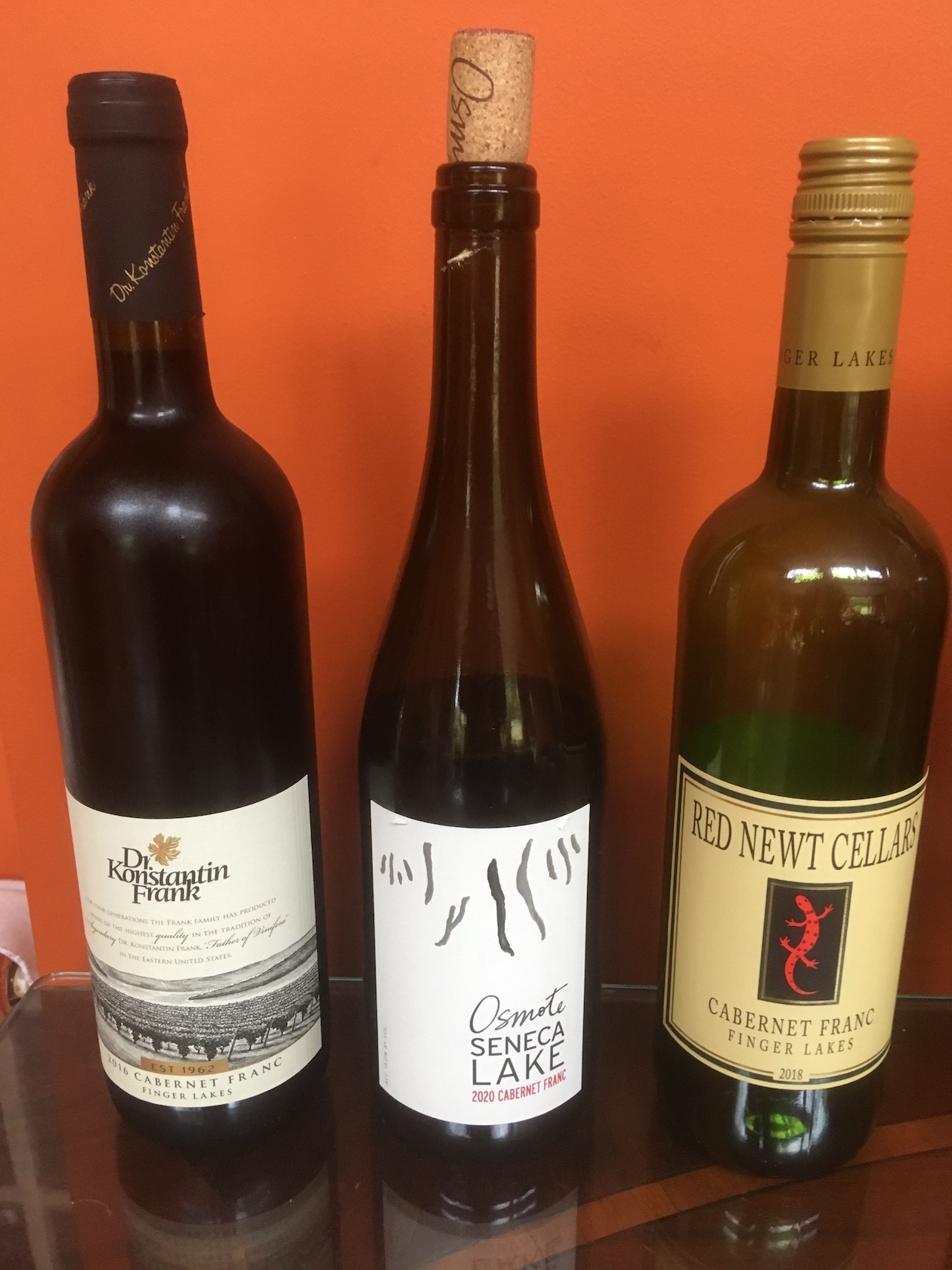 This Finger Lakes style remained apparent in the few other New York Cabernet Francs available in the UK that I managed to get hold of. Dr Konstantin Frank, established 60 years ago and the first serious commercial producer of vitis vinifera in the eastern US, is currently selling its 2016 Cabernet Franc (through Bibendum) which was aged for 18 months in lightly-toasted French oak barrels – the extra time in bottle showing how this crunchy style can evolve. 2016 was one of the Finger Lakes’ warmest summers, which gives the wine a little more weight than the Red Newt wine (and an extra half a percent of alcohol) but it still shows lovely red brambly fruit and has a long, crunchy finish. Very appealing.

Woodwinters imports Osmote Wine’s portfolio and within it is their bright, attractive Seneca Lake 2020 Cabernet Franc which has herby undertones and very light oak, quite elegant but punchy too, with the 13% alcohol supported by bright red fruit. Cabernet Franc also features in a cameo role, with just 12% of the blend in Osmote’s very fresh This is Red Pet Nat (hybrids make up the rest, 62% Leon Mullet and 12% Marquette). Unusual but distinctive, slightly off dry, I suspect the Cabernet Franc added backbone to this wine. Amazing how that Cabernet Franc gets around!

The variety is challenging the old order 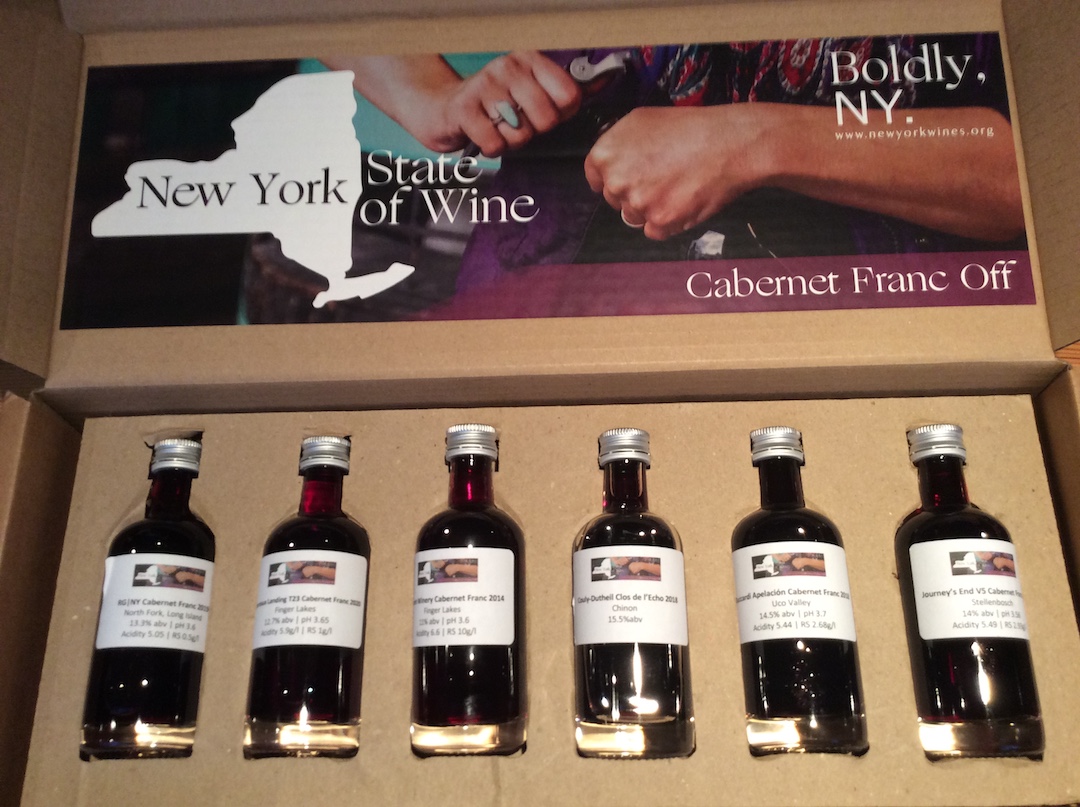 The New York Cabernet Franc showed very differently, of course – the wines were generally lighter, fresher and crunchier – but very well; the Finger Lakes wines, in particular, came across more clearly defined as a category on its own, and far more contemporary in style. The Long Island RG/NY was a contrast, very well made again, but fuller, meatier and more rounded, with 13.3% alcohol and some distinct earthiness on the rather dense palate.

“The great thing about Cabernet Franc is that it can grow well in a variety of soils, it can so far clearly handle climate change and, in the finished product, can be as good at 12% abv as it is at 14.5% abv, all the time retaining its freshness,” says Oz Clarke.

Clarke suggests the days are over of Cabernet Franc being over-shadowed by its ‘offspring’, Cabernet Sauvignon and Merlot – sometimes preferred for, respectively, their darker tannins and juicy, easy richness – or used as a filler in blends.

“The older order is being rocked: big guns like Cabernet Sauvignon and Pinot Noir have a pretender at their gates,” he says, even if that pretender is in fact rather old, with European plantings going back several centuries, especially in the Loire and South-West France.

On the border of impossibility

So how do New York’s wine producers explain the success of New York Cabernet Franc?

“I think the pendulum is swinging. A few years ago, you almost had to apologise for lighter wines but people are coming back to them, and appreciate the generally un-oaked, fresher style,” says Red Newt’s Russell who now makes four New York Cabernet Francs including, what he calls, an almost absurdly light Rosé, made with late (November) picked fruit.

“Our aim is to go for a fragrant, light, crunchy, red fruit style,” he says.

Christopher Bates of Element, whose 2014 Cabernet Franc featured in Oz Clarke’s Zoom tasting (and was the lightest with just 11% alcohol but supported by RS 10 g/l and an intriguingly broad palate) thinks that, as global warming makes wines from other climes much bigger and alcoholic than in the past, New York state generally, and the Finger Lakes in particular has a special role to play. 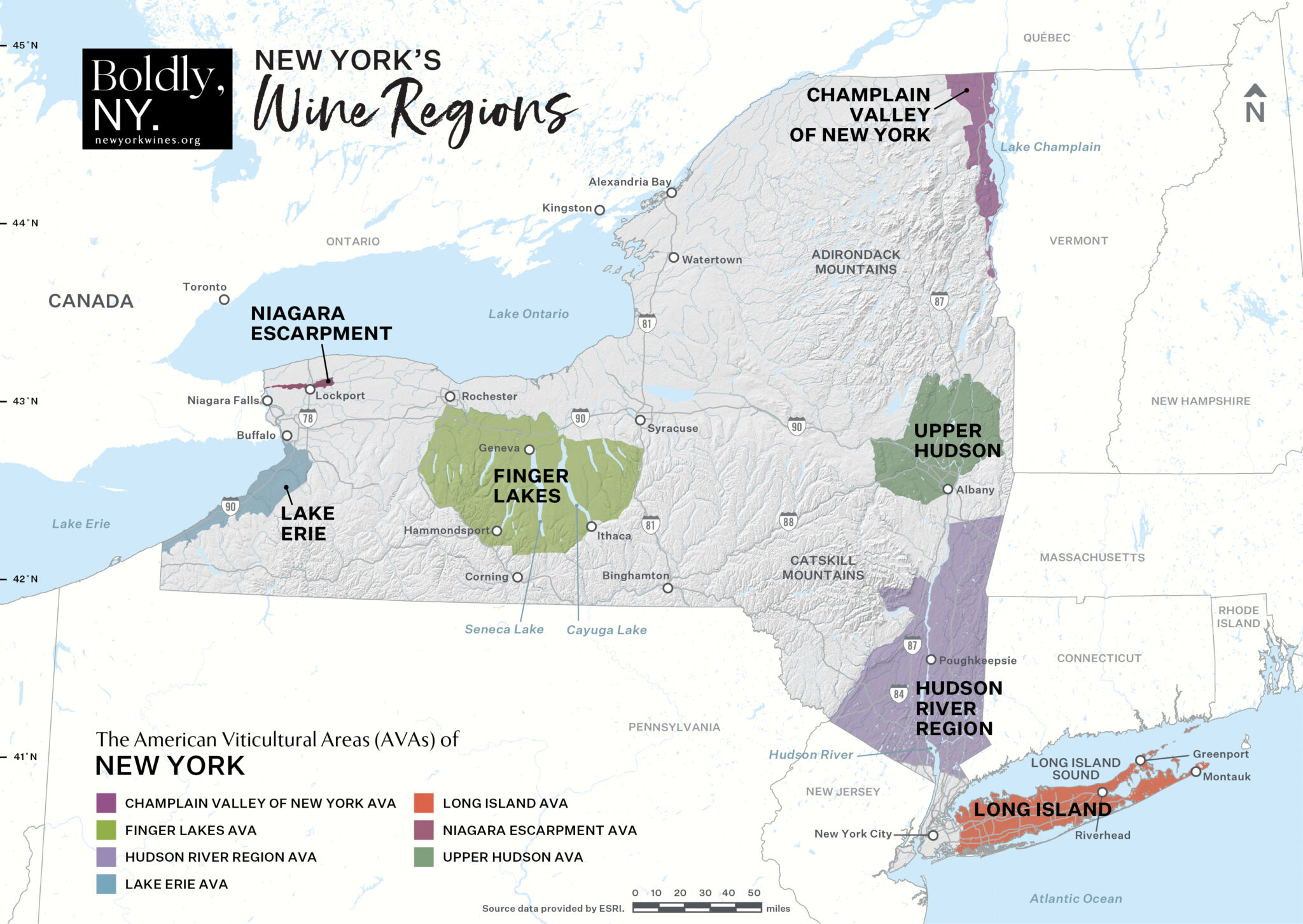 “We live on the border of impossibility, with very cold winters, and warm, humid summers. From bud break to harvest, our temperature rarely goes above 85°F or below 55°F and we have a great balance of sun and rain,” he says, adding that the Finger Lakes growing season is short but intense, from May 15-October 15 for Element Winery.

Bates believes Cabernet Franc is ideal for New York because it is cold-hardy, giving it a much broader range of areas in which it can be planted, and its thick skins and generally loose bunches make it fairly disease-resistant. All of which makes Cabernet Franc the most suitable red vinifera for the Finger Lakes, particularly when treated as he treats it, which is to say, hardly at all: the grapes are hand-harvested and then barely interfered with – the resulting wine left un-fined and unfiltered.

“When I approach Cabernet Franc, I approach it with intent to respect the grape’s characteristics. I want to make wines reminiscent of the great Cab Francs of the past, that are clear and transparent, that hit the black fruit spectrum, while retaining the herbal, green, pyrizinic elements,” he says, adding that he strives to make wine naturally, but not as Natural Wine.

Oz Clarke agrees that climate change has played a role in Cabernet Franc’s new coming of age, in New York State but also in other cool regions, not to mention much warmer, more obvious wine producing countries.

“As the world warms, it is now being recognised that Cabernet Franc can actually make more delicious wines than Cabernet Sauvignon or Merlot. It holds onto its acids better than the former and is better able to reflect its varietal character than the latter,” he says, noting that even Wales is now having a go.

Cabernet Franc is a grape that we will be hearing about a lot more, especially from New York, where it offers freshness, elegance and novelty. In essence, all the things wine consumers now want.