With a nose to sniff out some of the most interesting wines on the planet, and with an eye for a bargain, wine expert Justin Keay’s review of the top wines of the year is always a must-read. Of the 10 wines that floated his boat this year Keay includes a red from Crete, a super-premium Carmenere from Chile and a single vineyard Assyrtiko that retails for £6.99. There’s space for a West Coast Chardonnay (remember those?), an English fizz featuring a blend of 28 back vintages and, like our drinks editor Peter Dean yesterday, reserves special mention for the wines of Spain that are really going places.

With a nose to sniff out some of the most interesting wines on the planet, and with an eye for a bargain, wine expert Justin Keay’s review of the top wines of the year is always a must-read. Of the 10 wines that floated his boat this year Keay includes a red from Crete, a super-premium Carmenere from Chile and a single vineyard Assyrtiko that retails for £6.99. There’s space for a West Coast Chardonnay (remember those?), an English fizz featuring a blend of 28 back vintages and, like our drinks editor Peter Dean yesterday, reserves special mention for the wines of Spain that are really going places.

“So next time someone asks: “Glass of Prosecco?” just say, “Nah, make mine a ConVal,”, ” writes Keay.

For wine writers, 2021 was glass half full. On the downside, travel continued to be challenging, thanks to unnecessary and pricey Covid tests insisted on by the government to support its donor friends, many of whom own the testing companies. On the upside, physical tastings – both large and small – returned with a vengeance, showing that Covid hasn’t undermined the enthusiasm or skill of winemakers across the world.

Unusually for me, it was Spain which really grabbed my attention, confirming this country is currently one of the most dynamic in the wine world. A highlight was the UK launch of Ramón Bilbao’s impressive red Lalomba wines, Finca Valhonta 2017 and Finca Ladero 2016, shown alongside the mineral peach Finca Lalinde 2020, a deliciously fresh blend of 90% Garnacha and 10% Viura, the fifth vintage of this lovely, very moreish rosado. But the go to wine was the amazing Ladero – just 6000 of the 36,000 bottles of Lalomba that are made are of this delicious red, an 80/20 Tempranillo/Garnacha blend made from vines high in the Cantabrian mountains. Very expressive red and dark fruit in a wine marked by precision and elegance. Rioja, but not as we’ve known it.

Further preconceptions were blown away at the launch of Tim Atkin’s Top 100 Wines of Ribera del Duero tasting in November. I have firm memories of fleeing a Ribera tasting around ten years ago, overwhelmed by oak, tannin and a disagreeable sense of sameness.

What a difference a decade makes. The wines here were remarkably diverse with oak monsters sitting alongside terroir-focused wines of beauty and finesse, including my favourite, the Raspon 2019 from Bodegas Marta Máté. Very expressive, modern and light, this almost shows as Gamay but has a wonderful ethereal character which shows how much this region is continuing to evolve.

Staying in Spain but moving west, I enjoyed a Zoom tasting with the irrepressible Paula Fandino of Mar de Frades in Rias Baixas, best known for its Albariño Atlantico in its distinctive tapered blue bottle. Rias Baixas is another region which has come on by leaps and bounds, led by innovators like Fandino. She showed her new Finca Monteveiga wines from the slightly inland Ribeira do Ulla Valley – famed for its schist soils – but the real star for me was the Finca Valinas 2014, an amazing, ethereal wine from the Salnes Valley with fantastic aromas and a slightly saline palate. And of course, a lovely blue bottle that you won’t want to throw away.

The equally irrepressible Fred Loimer, owner of the eponymous winery in Austria’s Kampstal region, is best known for his still wines. However it was his increasingly confident sparklers that took centre stage in a Zoom tasting around mid-year, with two Sekts and two more serious wines shown. Although Loimer reckons it will improve with a few more years in bottle, his zero dosage Niederoesterreich Grosse Reserve Loimer Blanc de Noirs 2016, bottled in 2017 and disgorged this April was an absolute stunner, lots of green apple and peach but also great zest suggesting high end bottle fermented and aged Sekt really deserves a place alongside Champagne.

Closer to home – less than half an hour away, in fact – Hampshire’s Exton Park proved that English wine really has come of age. Winemaker Corinne Seely’s three Reserve Blend creations rightly captured the imagination of the trade with their launch in April with the bulk of each made from EP’s large library of reserve wines. These are something quite unique in the UK, neither vintage or NV but traditional method sparkling wines that capture the essence of this 25 hectare estate. For me it was again the Blanc de Noirs – or should I say, the RB28 – that stood out, a complex but precise blend of 28 reserve wines, toasty brioche on the palate with a delicious soft mouth feel.

To Chile and Ventisquero Wine Estates, which – in an echo of Ramón Bilbao and Lalomba – has created Obliqua as a high end expression of the country’s signature variety Carmenere. Just 6000 bottles of the  2017 were made – compared to the one million plus cases that Ventisquero makes altogether – and is an absolute stunner, full on black cherry and berry fruit supported by good acidity and firm but ripe tannins, with white pepper giving added definition to the nose and palate. During a Zoom session winemaker Felipe Tosso said his wines are about the very special place that is the 500m vineyard in Apalta where the grapes come from and I believe him; this is impressive Carmenere with attitude, a riposte to those who say this isn’t a variety to be taken seriously.

American Chardonnay is one of those categories that has fallen out of fashion in recent years – too oaky, people say, too pricey as well, whilst others complain that the wines coming out of the Golden State – particularly from Napa and Sonoma – are just too predictable. But then you taste a wine that reminds you just how delicious New World Chardonnay can be. 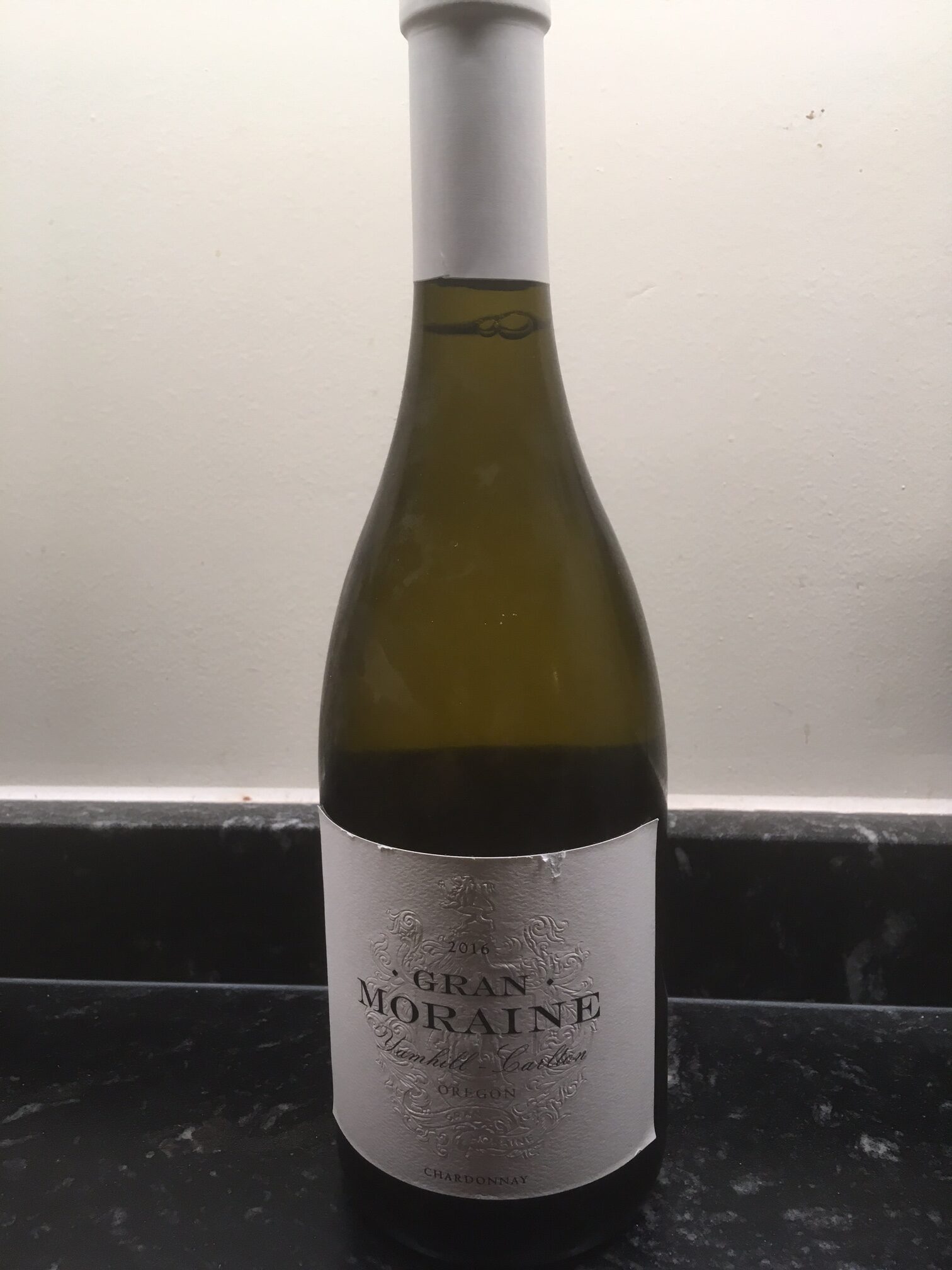 The good people at Jackson Family Wines sent me a bottle of the Gran Moraine 2016 to celebrate International Chardonnay Day earlier in the year, and I’m very glad they did. Produced in the Willamette Valley’s Yamhil-Carlton region of Oregon, this is a remarkably well-balanced wine, showing butter and soft vanilla notes but with a pleasing saline mid-palate that allows the fruit – apricot and peach – as well as white flowers to come through. Chardonnay isn’t what usually comes to mind when thinking of Oregon but it certainly will for me after this. Another treasure from the inestimable JFW group.

Greek wine continues to be all the rage in the on-trade but it has also been making more inroads into retail, spearheaded by such bargains as the Single Vineyard Assyrtiko 2020 sold by Aldi for just £6.99 (produced by Filos Estate, Florina, near Greece’s border with Northern Macedonia), this remarkable deal must have been made possible by the collapse of Greece’s HORECA sector during the pandemic). Floral, fruit driven and not overly acidic – as some cheaper Assyrtikos can be – this wine’s fantastic price-quality ratio (single vineyard don’t forget), gets it into my list. 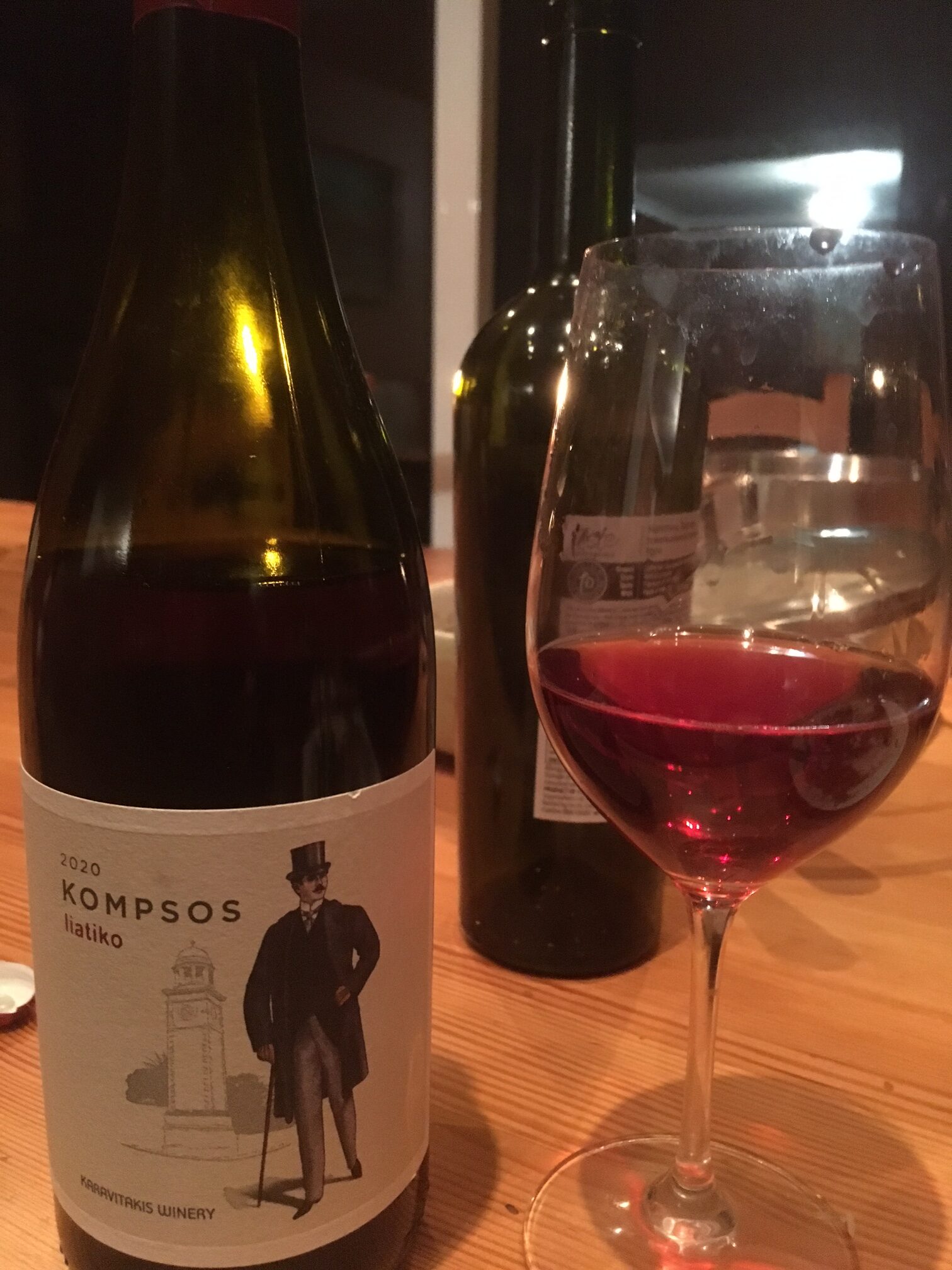 My ninth wine, sold by the ever impressive Wine Society which is fantastic at sniffing out bargains from, well, everywhere but who have really taken Greece to heart, is from Crete. On a visit there a few years ago I wondered why no one was importing Liatiko, the island’s best red variety, particularly given the current vogue for un-oaked, light reds, without aggressive acidity. With the Kompsos Liatiko 2020, produced by Karavitakis, the WS have found a great example of this ancient grape. Very light in colour, amazingly elegant but also wonderfully flavoursome with cherry and redcurrant fruit supported by soft, warm tannins, this is remarkable value at under a tenner (£9.95), especially when served slightly chilled.

It’s a fair guess that Prosecco continued to be the must-have sparkling drink of most Brits over the Christmas break – the need to escape the endless wave of grim news suggests sales will continue to rise despite price rises caused by Brexit and related distribution problems. So does a Prosecco make my list? Well yes, sort of.

After two very impressive Zooms hosted by Sarah Abbott of the Swirl Wine Group looking at Proseccos from Conegliano-Valdobbiadene, I’ve become a convert: the Extra Brut, Brut and Extra Dry wines made by producers in this DOCG which takes its name from the two main villages within it, are head and shoulders above the DOC stuff that usually graces the shelves of supermarkets and chain restaurants. I would say they are almost a different drink even though the variety, style and concept are of course the same.  And for what they are, they really don’t cost that much more – £13-20 being a typical range. 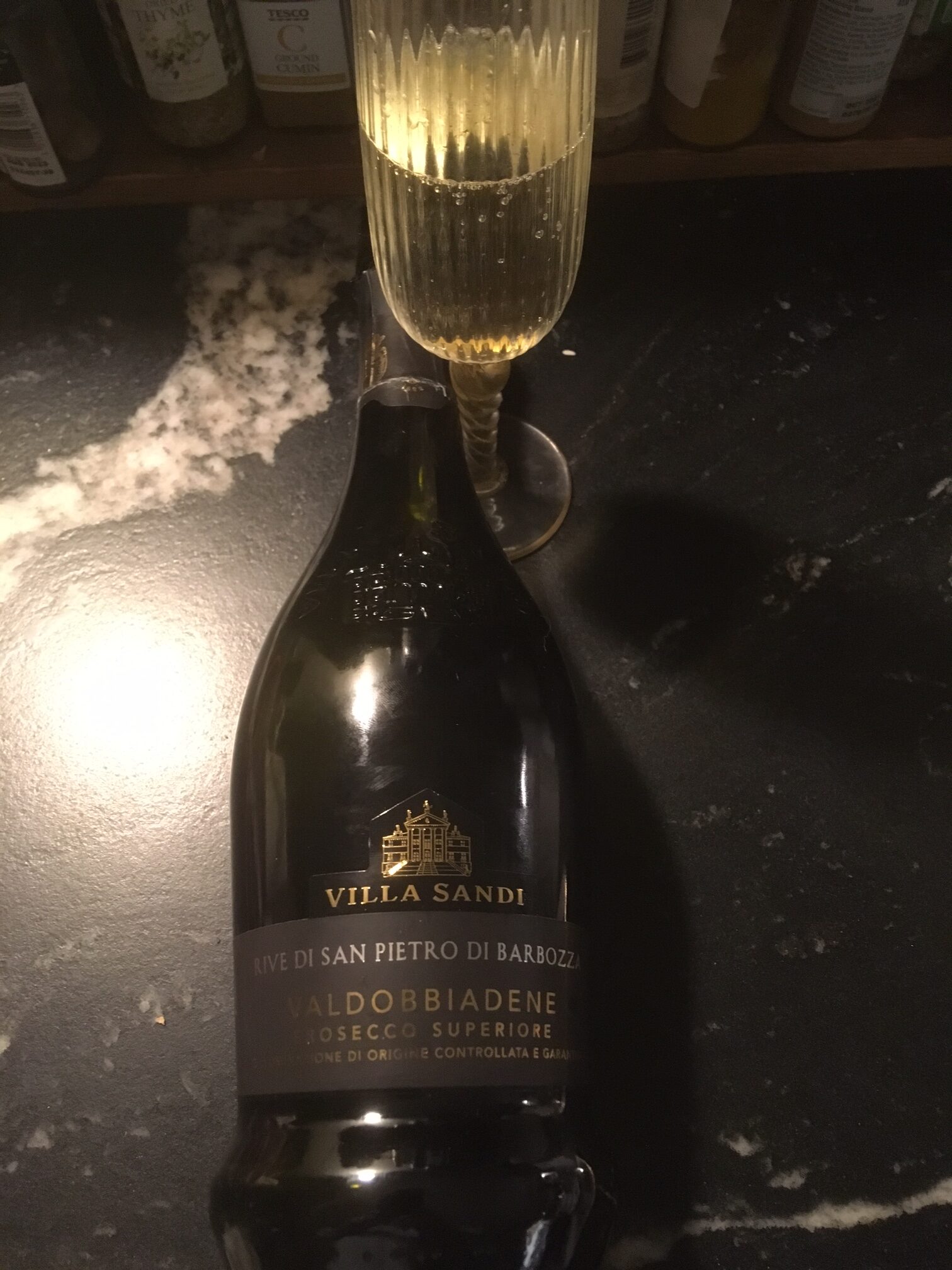 My wine of choice is from one of the biggest producers in the DOCG, Villa Sandi. Their black-labelled Rive di San Pietro di Barbozza Millesimato 2020, is a really moreish Extra Brut Prosecco Superiore from Valdobbiadene, showing pear, pineapple and guava on the palate, supported by good though not excessive acidity. The Glera grapes are handpicked because they have to be: As a Rive wine, it is made from low-yielding grapes grown in the region’s steep hillsides where tractors are quite useless (within the broader Prosecco category, Rive is second only to Superiore di Cartizze DOCG  wines, which come from the best possible plots within the DOCG).  A really enjoyable, fresh treat.

So next time someone asks: “Glass of Prosecco?” just say, “Nah, make mine a ConVal”. Like me, you’ll really appreciate the difference.