“When Castelnau started planning Hors Catégorie as a concept in 2010 it was surprisingly difficult to find something that had not been done before,” writes Dean.

If you’re a keen amateur cyclist like I am you will always remember the first Hors Catégorie climb you do on a bike. You can’t do one by accident. They are called Hors Catégorie for a reason – they are beyond category ie. the traditional 4 to 1 rating system for grading severity of ascent, no longer applies. Hors Catégorie are the most challenging mountains you can climb on a bike, so hard and requiring such a level of exertion that all rules go out the window. There’s no point trying to climb up with someone, this is a singular challenge: you versus mountain.

Hors Catégorie are one-offs, mountains that are so unique and which the successful cyclist will usually ‘wear’ as a badge of honour, if they can get to the top without the use of lithium, that is. In the Tour de France the conquerors are given extra points and get to wear special jerseys. Us mere mortals might buy a souvenir jersey if the summit has a gift shop, whilst trying to walk in a straight line to get there.

In cycling psychology the more challenging a climb is the better. My first (and I have not done many) was Port de Pailhères in the Pyrenees which is 2001 metres high and requires cycling uphill continuously for 18 kilometres with a maximum gradient of 12%. And that’s the ‘easy’ approach. One guide describes it as “an unforgiving steep and vindictive pig” which made me want to climb it even more – twice in fact. Explaining this to people not into cycling is difficult but, the challenge aspect aside, the beauty and majesty of mountain scenery as it changes all around you is a very special experience when connected to it by a quiet and pure form of transport.

The mythology of Hors Catégorie climbs is revered by cyclists of course. These climbs have claimed lives and reputations. I love the one about Col du Tourmalet which is a staple on the Tour de France which, when it was first ascended by the great Italian climber Luigi Lucotti in 1919, he appeared at the top of the mountain with the white dust of the road caked over his face, making him look like a flour-faced Pierrot, from where he declared “I don’t want to race any more.”

Mount Ventoux which was ascended two days ago (twice for the first time on a stage of the Tour de France), famously claimed the life of Tommy Simpson, one of Britain’s most successful cyclists at the age of 29.

So, what’s this all got to do with Champagne I hear you ask?

To understand the myth of climbing the ‘insurmountable’ is to understand why Champagne Castelnau devised it as a concept for its Hors Catégorie Prestige Collection, which is a series of one-off Champagne cuvées, the third of which has just been released to tie in with the Tour de France which is currently underway.

The origins of the cuvée are tied in with the House’s centenary celebrations. Castelnau was founded in 1916 and, for the House’s 100thanniversary in 2016 it wanted to celebrate with an exceptional cuvée. It also wanted winemaker Elisabeth Sarcelet to have no restrictions whatsoever on how she made the wine – she was given carte blanche to make a ‘one-off’ iteration that went beyond the norm and regular classification – just like an Hors Catégorie climb.

Castelnau is a House that also has strong cycling links, being the only Champagne supplier to the Tour de France and also having keen cyclists at the helm in Pascal Prudhomme, general director of Champagne Castelnau and Keith Isaac, head of Castelnau Wine Agency.

Isaac explains that, when they started planning Hors Catégorie as a concept in 2010 it was surprisingly difficult to find something that had not been done before.

What the team settled on was something that built on their links with cycling and built on the skills of the winemaking team. To tie in with the Hors Catégorie theme each new release would be dedicated to the highest mountain climbed on the Tour de France, the year the wine was bottled.

Despite the specific differences between each cuvée, there are some similarities across the three wines too. The things that they do share in common are: that the base wines are fermented in steel and then aged in Argonne wood; unlike the other Castelnau cuvées they are based on Pinot Noir and Pinot Meunier with a high percentage of Meunier; low dosage; five years ageing on the lees; the Champagne is bottled at a lower pressure – which gives a finer mousse and a more white Burgundian mouthfeel than a classic Champagne; they have a gentle effervescence; disgorging at least six months before release; there is no set template for making the wine.

Fabrice Sommier, brand ambassador for Castelnau, who led the online tasting, made a point about the high percentage of Pinot Meunier, which is rarely given enough credit, he says, by the other Grand Champagnes.

“Pinot Meunier has a bad press but it’s not true, it has a lot of acidity and a lot of body and the combination with the oak is perfect,” he says, “a lot of the Grand Champagne’s top cuvées forget Pinot Meunier, but you can try monocepage with Pinot Meunier and can have a crazy wine which gives great maturity,” he said.

So how were the wines tasting ? 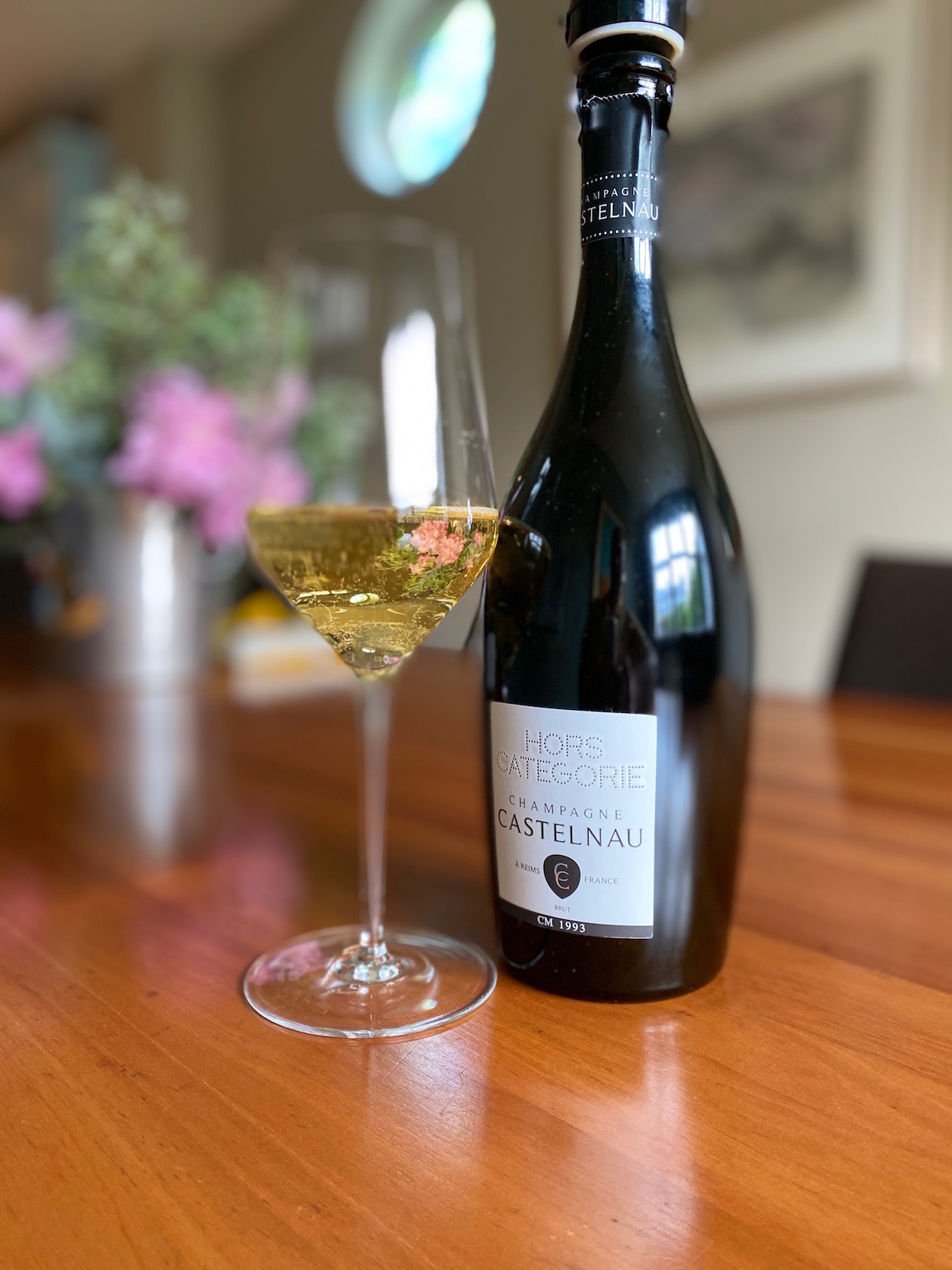 To look at the wine is deep gold with a fine bead; ripe, voluptuous nose with an attractive mix of ripe orchard fruits with toasted and spice notes. There is a lot of complexity here with immediate hints of quince, peach, vanilla cream, crystalised ginger; aromas then turn to baked apple, leather, cocoa, a touch of tobacco and mushroom. The 30% Pinot Meunier (and just 15% Chardonnay) gives it volume in the mouth and a pleasing roundness, the wine is nicely balanced in the mouth, rich and ripe but good composition, and a mineral-driven core of acidity. Although the wine was fermented in steel, it has almost a year in barrel which adds texture and gives a little bit of tannin and fresh bitterness on the finish.

As mentioned, this is the latest and third release in Castelnau’s prestige cuvée series that is a one-off blend aimed at showing off the House’s expertise at blending reserve wines, in this case a blend of wines hailing from 2008, 2010, 2011 and 2012, the cepage being 15% Chardonnay, 55% Pinot Noir and 30% Pinot Meunier.

The cycling connection is a cute one and the French particularly will understand the concept of Hors Catégorie much more I feel. Personally, I am not sure the initial letters and height of the mountain is clear enough – 1993 could be mistaken for vintage perhaps?  One thing I am positive about, though, is that I could murder a glass of this when I get home after a hard day in the saddle!

It is a delicious wine and good value at £120 a bottle RRP.

(Incidentally, after the tasting I served this blind to some fellow wine experts, alongside two other high profile (household name) prestige cuvées – one retailing at £160, the other £360 – and the Castelnau was the preferred Champagne). 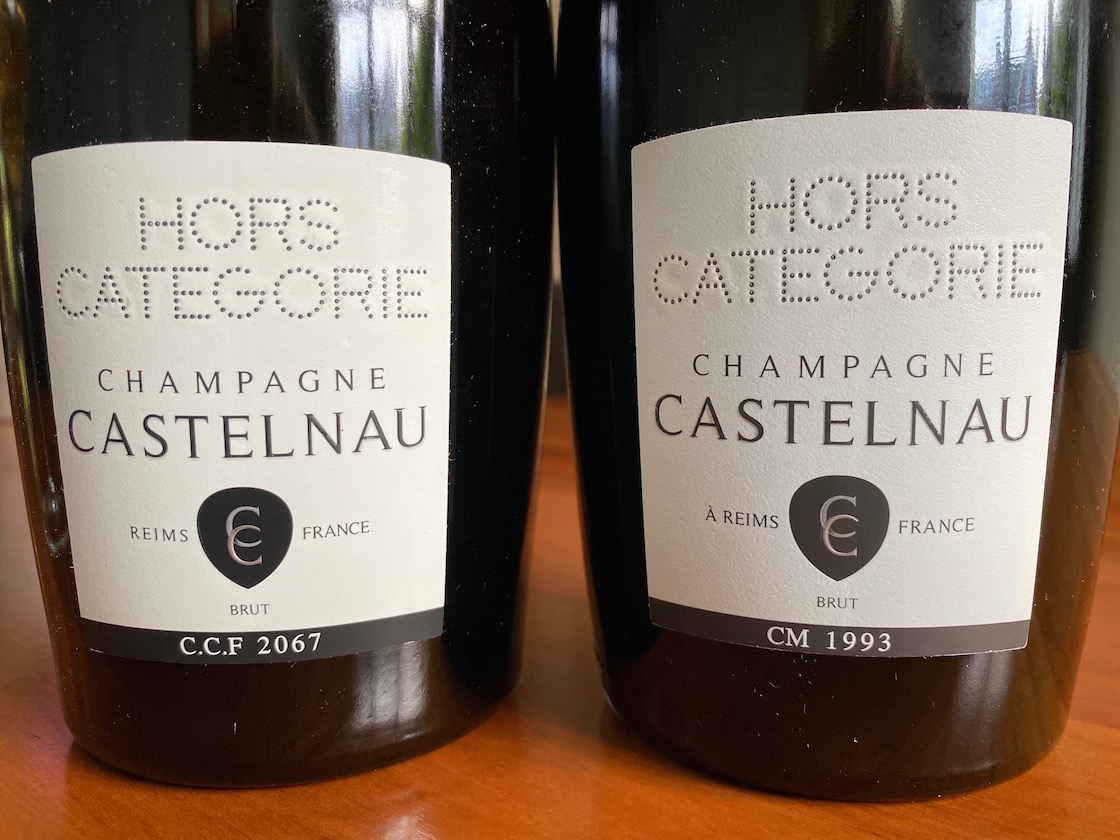 We tasted the new cuvée alongside the last one – C.C.F 2067 – which was named after the Col de la Croix de Fer and was released two years ago. The Champagne is a blend of two contrasting vintages – the hot 2010 and the 2011 that had a great deal more acidity and thereby balances the two. The oak, that was quite apparent on tasting the wine in 2019, is more integrated, lending texture and pastry notes. I was getting a rich eggs and cream patisserie edge, a bit of caramel, coconut, chocolate and truffle. There were notes of bergamot, Sicilian lemon, the wine had a terrific sense of pace and balance. 3600 bottles made.