Champagne Palmer Grands Terroirs 2015 and the Grands Terroirs 2012 in magnum were launched by Champagne Palmer & Co last Wednesday at Skye Gyngell’s Spring restaurant. CEO Rémi Vervier, who is also one of this cooperative’s five oenologists, hosted the dinner in which he laid out the company’s philosophy regarding larger formats and his backing for the on-trade. Victor Smart took one for the team.

Champagne Palmer Grands Terroirs 2015 and the Grands Terroirs 2012 in magnum were launched by Champagne Palmer & Co last Wednesday at Skye Gyngell’s Spring restaurant. CEO Rémi Vervier, who is also one of this cooperative’s five oenologists, hosted the dinner in which he laid out the company’s philosophy regarding larger formats and his backing for the on-trade. Victor Smart took one for the team.

Palmer produces many size of format but it is the magnums that always come out top, according to Vervier. In fact, he views a bottle of Champagne Palmer Grands Terroirs 2015 as merely “half a magnum.”

If the bigger, brasher Champagne houses are about commoditising celebration wine, then Champagne Palmer & Co is the opposite. Producing around 1 million bottles a year, the cooperative lacks an outsized marketing budget; indeed it seems perfectly content to remain somewhat “under the radar”. Most of its UK sales are to the on-trade, with Waitrose its only major retail outlet.

Palmer is known for the long ageing of the wines, high proportion of reserve wines – and its fondness for magnum bottles. None of these come cheap.

Founded in 1947, Palmer was named after the British biscuit maker Huntley and Palmers, which in France immediately post-war was unaccountably seen as the epitome of good taste. It now boasts 300 growers as cooperative members and is rooted in the Montagne de Reims plateau of Champagne with more than 200 hectares of vineyards classified as premier and grand crus.

We are at Spring, the Somerset House restaurant under chef Skye Gyngell. Significantly, our host, Rémi Vervier, the chief executive, is also one the producer’s five oenologists, proudly seeing himself as a “technologist” as much as businessman.

We kick off with the Champagne Palmer Grands Terroirs 2015. This is 50% Chardonnay, 38% Pinot Noir, and 12% Meunier with a 7 g/l dosage. Sunshine and cool nights in the second half of August allowed the grapes to ripen well and there is plenty of acidity. Vervier sees an attractive bitterness coupled with an elegant butteriness. 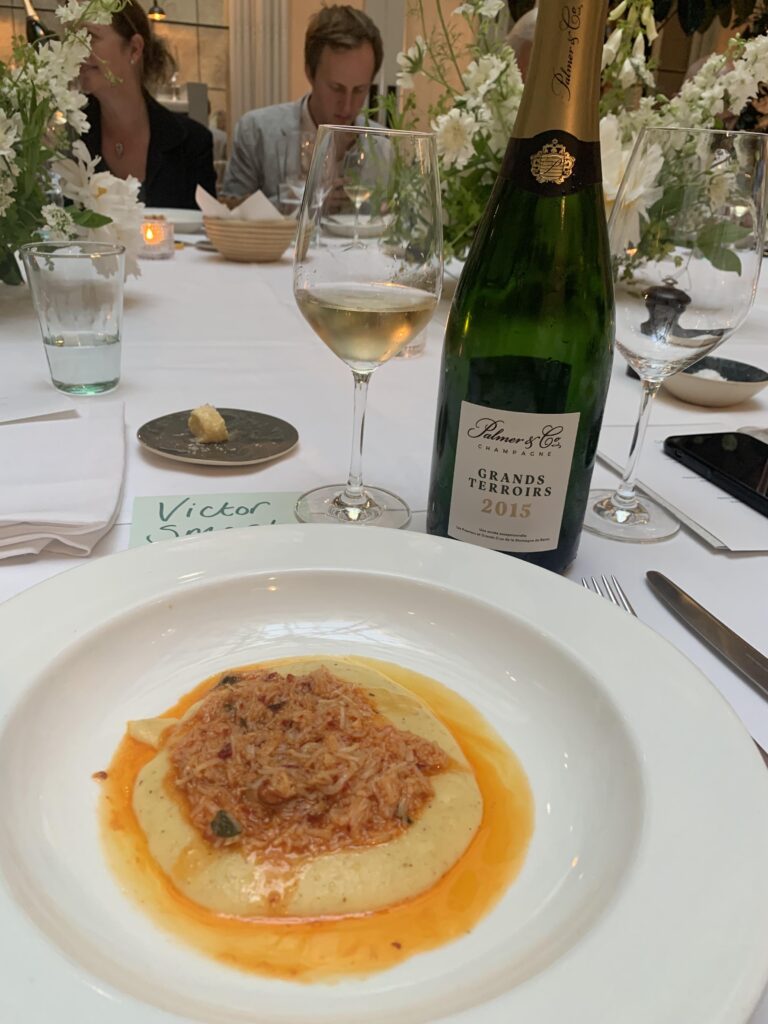 The starter is crab and ‘nduja on wholegrain polenta, strong tastes which provide the wine with a bit of competition. As for the full potential of the wine to be realised longterm… it probably won’t emerge for a while Palmer states, saying this vintage could age well until 2032.

Then we move on to the Champagne Palmer Grands Terroirs 2015 in magnum. This is 49% Pinot Noir, 46% Chardonnay and 5% Meunier with a similar 7 g/l dosage. Accompanying it is a main course of roasted sea bass with courgettes, rocket and aioli. Vervier spots a “nice reduction“ in the wine (which in this context he sees as a good thing). This vintage displays precisely, the ‘purity, precision and elegance’ that Palmer says are its hallmarks.

“This is exactly the expression of who we are,” declares Vervier. Undeniably, there is a balance between generosity and tension that makes drinking this quality of Champagne truly exciting.

We are, of course, blessed by being served from magnums for the 2012. But how much does this really contribute over the humble 75 cl bottle? Palmer’s view is categorical: they produce wine in single bottles, magnums, jeroboams even, but say, it’s the magnums that always come out top. In fact, to Vervier a bottle is merely “half a magnum”.

So how was the Champagne Palmer Grands Terroirs 2015 tasting?

The nose opens with notes of orange blossoms and acacia, mixed with notes of yellow fruits. The palate is characterised by freshness, citrus fruits and notes of brioche and dried fruits.

A nose with fruity notes of candied lemon and dried fruit, toasted pine nuts and caramelised hazelnuts. The palate is marked by its saline minerality and charming citrus aromas. A vintage with amplitude and incredible balance.