Washington Wines prides itself on how it is breaking new ground. There are now 70 grape varieties planted, oak is on the retreat, new vinification vessels are de rigeur and there are three new AVAs to add to the 16 already mapped out across this second largest wine-producing region in the United States. Although his top 10 wines from the tasting reflects this diversity and innovation, Justin Keay had to seek these wines out from a tasting room that was Old World-centric, exhibiting perhaps too many examples of Bordeaux and Rhône wine styles.

Washington Wines prides itself on how it is breaking new ground. There are now 70 grape varieties planted, oak is on the retreat, new vinification vessels are de rigeur and there are three new AVAs to add to the 16 already mapped out across this second largest wine-producing region in the United States. Although his top 10 wines from the tasting reflects this diversity and innovation, Justin Keay had to seek these wines out from a tasting room that was Old World-centric, exhibiting perhaps too many examples of Bordeaux and Rhône wine styles.

“Caution also marked the choice of wines being shown, with the focus clearly on what this region does well and is known for,” writes Keay.

When I learned that this year’s Washington Wines tasting was being held in London’s Shoreditch, my first reaction was that the organisers were sending a message. This area, just beyond the City’s Liverpool Street, has changed beyond recognition – and has certainly moved on from when I edited a business magazine on the High Street around 12 years ago and looking over your shoulder when you stepped out for a sandwich was second nature.

Not only is the area now mega-cool but Behind the Bike Shed – the event space for the tasting – just near trendy Hoxton Square, is the very epitome of hip, with lots of inside and outside space to attract partygoers and WFH-ers. As the sunglass-wearing security guard (straight from casting central) waved me in, I assumed these cool surroundings would showcase a transformed wine industry.

After all, at a Zoom tasting last May, David Rosenthal, a winemaker for Chateau Ste Michelle, the first and far and away the biggest producer in the state, told me change was definitely underway in a wine industry long marked by its conservatism. Although Cabernet Sauvignon is still king, alongside Merlot and Syrah, with Chardonnay and Riesling the two main white varieties, some 70 varieties are now grown in this, the second largest wine-growing state in the US.

New winemakers are planting Gruner Veltliner, Albarino, Grenache, Cinsault and Barbera and Cabernet Franc, another positive given the growing popularity of this variety. Three new AVAs are imminent, to add to the existing 16 of which the vast Columbia Valley, Yakima, Walla Walla and Red Mountain are the best known, whilst oak is on the retreat, with winemakers using concrete and other ageing vessels.

But this really wasn’t that sort of tasting.

The Washington State Wine Commission’s last physical appearance in London was held just as the pandemic broke on March 8, 2020 and sadly turned into a super-spreader event. Last year Zoomed by. This year the Commission has returned to physical tastings here but many producers are clearly – and understandably – still cautious about being out and about. Caution also marked the choice of wines being shown, with the focus clearly on what this region does well and is known for.

There were 11 tables at Behind the Bike Shed. Two were taken up by Chateau Ste Michelle and its multiple brands (including Colombia Crest, 14 Hands and the more premium North Star) which, despite its size and importance, doesn’t seem to have a main UK importer. There was another for Charles Smith Wines, whose amusing labelling and nomenclature (Kung Fu Riesling, Boom Boom Syrah) have established them a good foothold for quality entry level wine in the UK.

Another two were manned by Mike Coveney of Hilltop Wines, trying to find importers for some actually pretty impressive medium-sized producers – Saviah Cellars, Millbrandt Vineyards, Terra Blanca and Woodward Estate – who between them fielded some of this tastings’ more interesting wines. 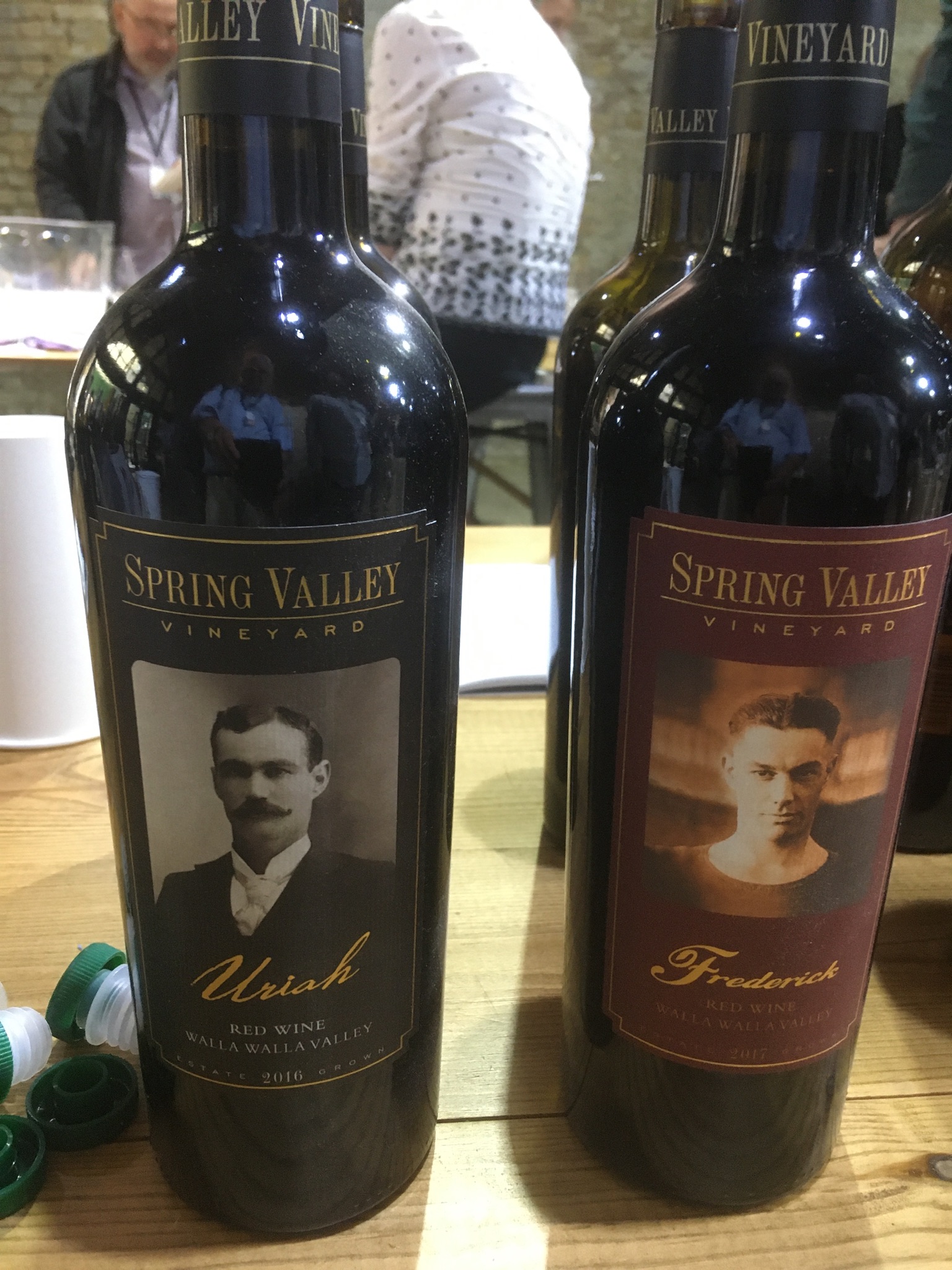 I get the sense producers here can take their Bordeaux worship a little too far. Exhibit One?  Chateau St Michelle’s Spring Valley Frederick 2017 and Spring Valley Uriah 2017,  the former a very conscious Left-Bank style Bordeaux blend, the latter an equally imitative Right Bank one (both quite decent and it was fun considering whether this one tasted more Cabby and that one more Merlot-y…but really?). But this strong degree of same-iness only made the challenge of finding the truly outstanding wines here all the keener.

So which producers and wines stood out for me? 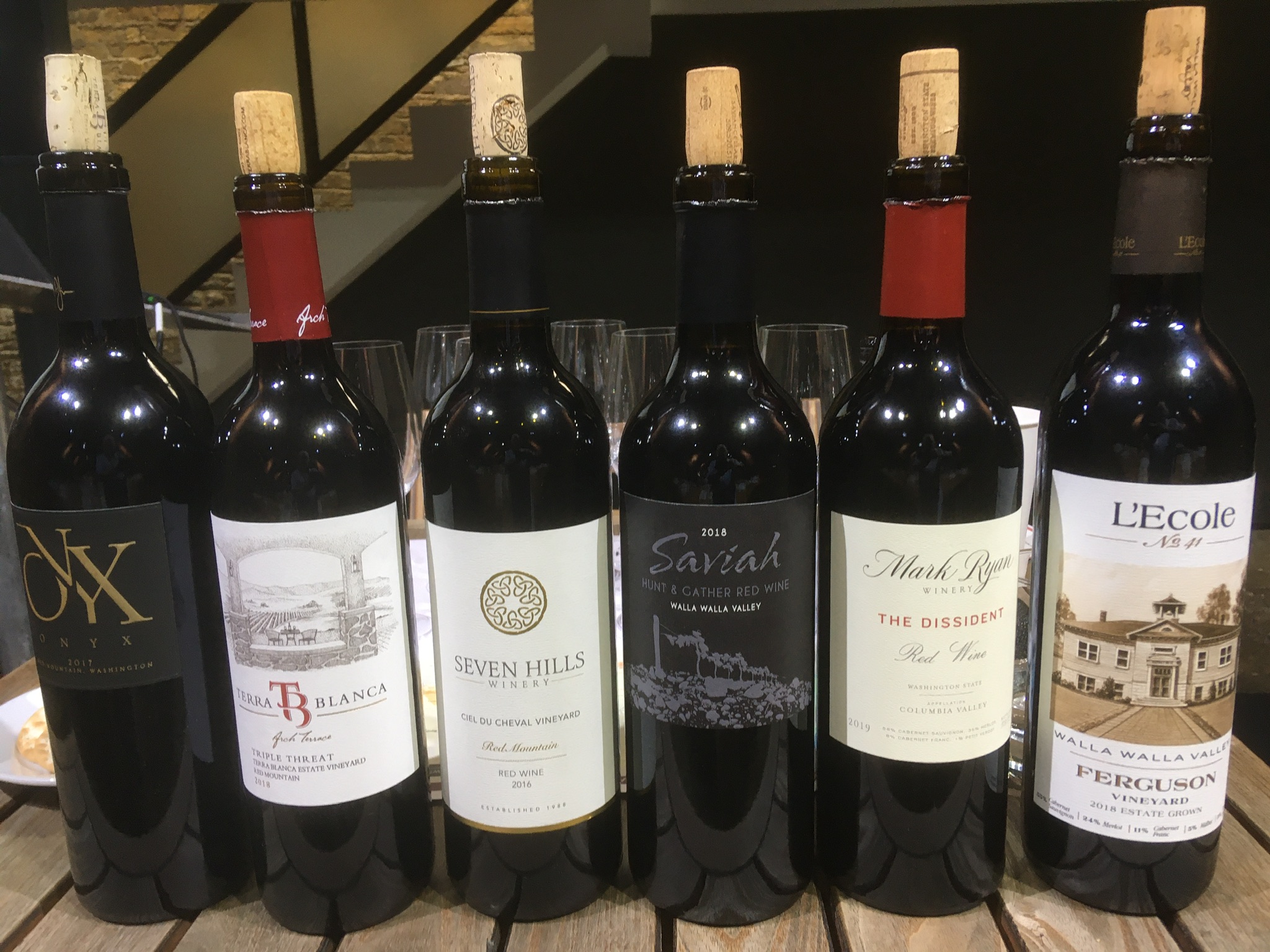 This red Rhône blend hits the UK later this year and it’s worth waiting for. A subtle, slightly spicy blend of Grenache (46%) Counoise (24%), Mourvedre (24%) and Syrah (6%), medium-bodied but with a long finish, this has great balance and perfect acidity. (Wine Treasury)

Considering Washington State has one of the biggest plantings of Riesling in the world, there was surprisingly little of it on show here. This simple, highly gluggable wine from former rock star manager Charles Smith (his photo shows he looks the part) has an off-dry richness reflecting the fact the wine spends six months on the lees. Fresh, great fun, chop chop. (Bibendum). 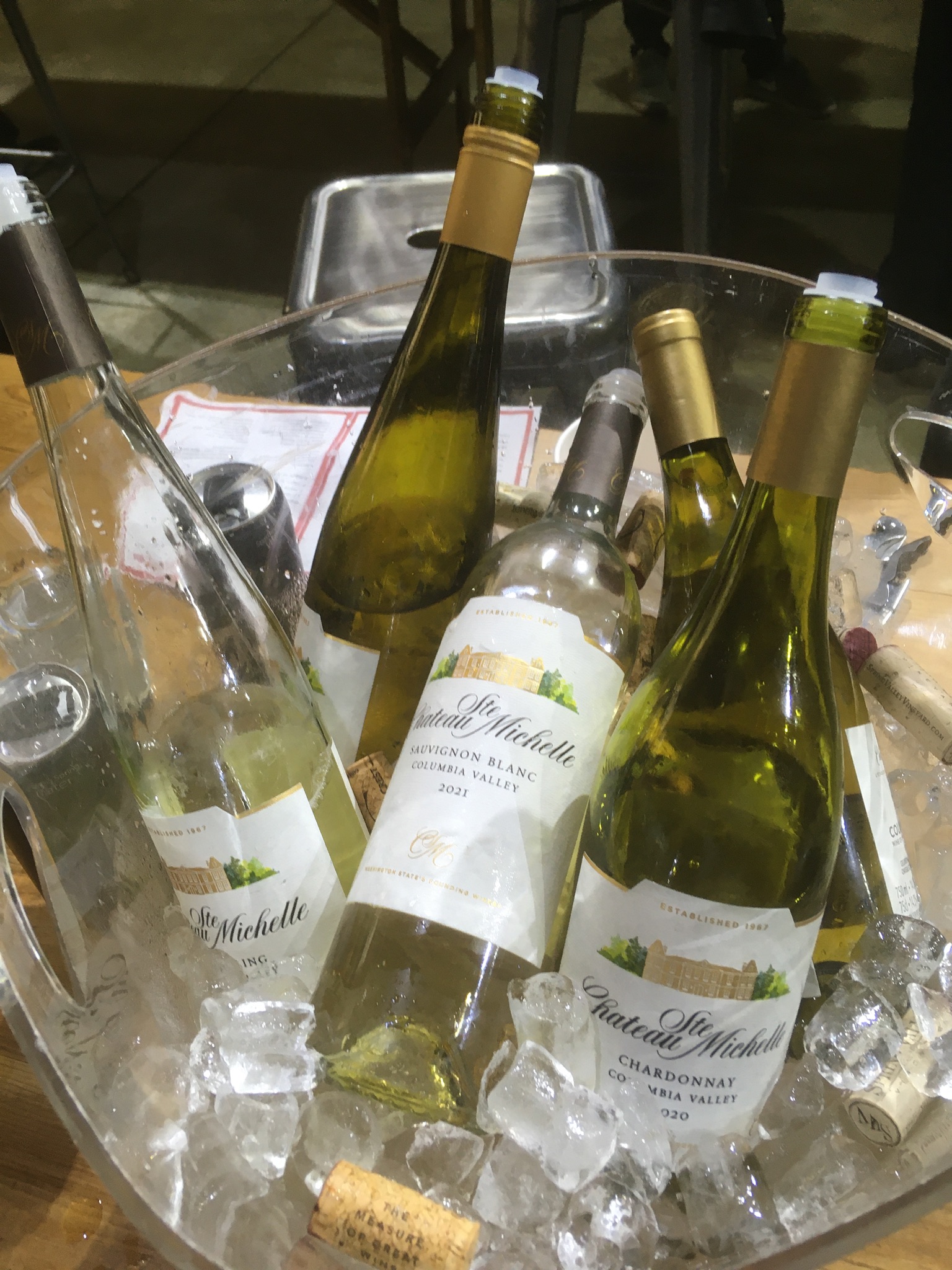 Another great value Riesling but more restrained with lots of floral notes supporting the fine acidity. Despite the name, this is actually slightly off-dry but very moreish. Also worth trying is the CsM Chardonnay, lightly oaked and quite simple but equally great value (at around £10-12 a bottle).

This Colombia Valley blend of 72% Sauvignon Blanc and 18% Semillon really hit the spot. Barrel-fermented and aged, with a harmonious and generous structure, this felt really well made and elegant. The Semillon shows well here – always a good thing with white Bordeaux blends in my view. (Looking for importer).

Syrah tends to do very well in Washington State and nowhere more so than in the Red Mountain AVA. This is a deep, dark and rich example, lots of pepper and spice, very distinctive. (Looking for importer – Contact Hilltop Wines). 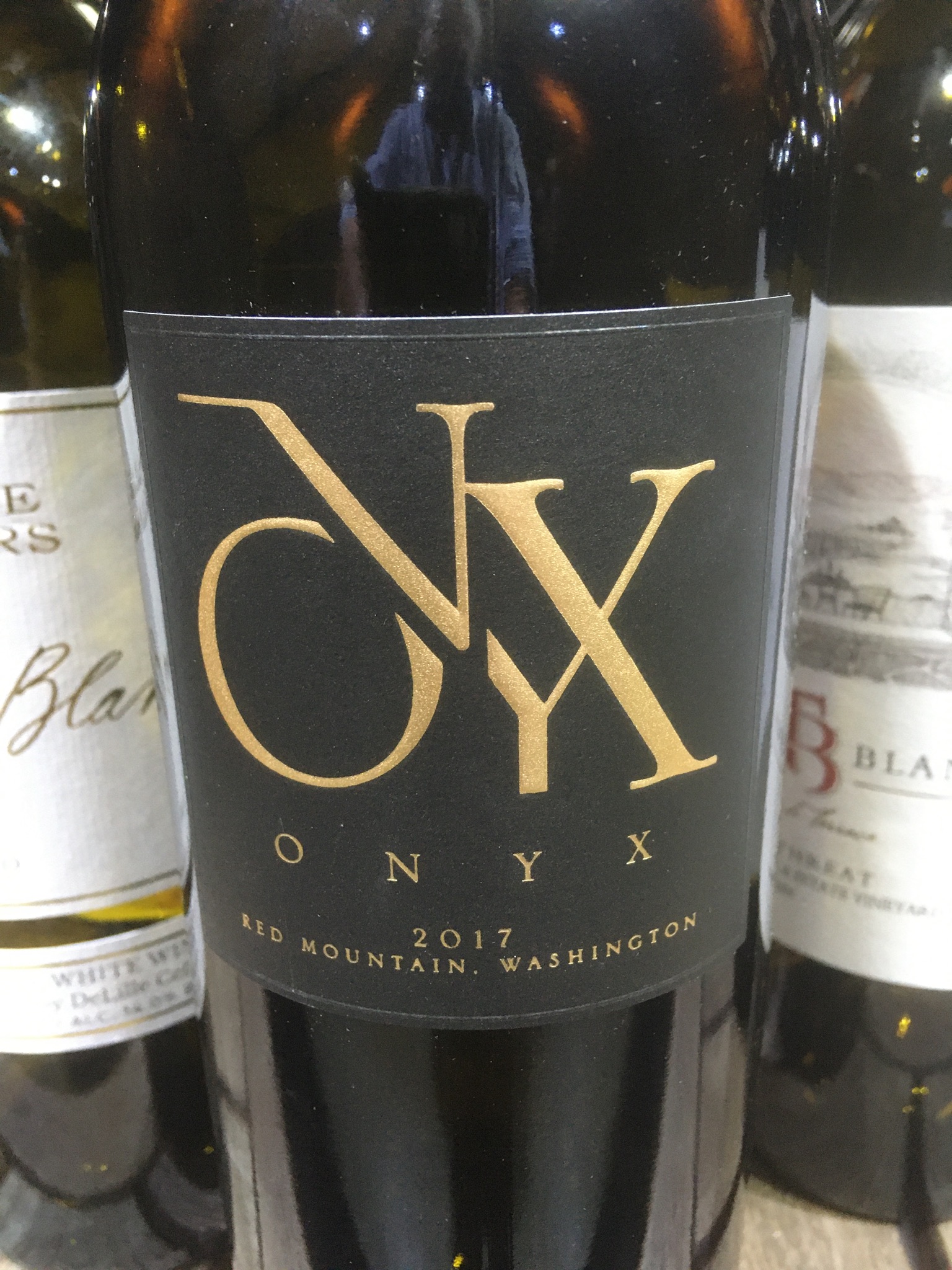 Again from Red Mountain, this mega Bordeaux blend (Cab Sav, Merlot, Cab Franc, Petit Verdot and Malbec) was amongst the most expensive wines on show (around $80 in the US) but worth every penny. The wine spends 27 months in French oak (most of this new) and has a complex, distinctive structure and long finish with lots of dark cherry, plum and berry fruit. This one really is firing on all cylinders. (Looking for importer – contact Hilltop Wines). 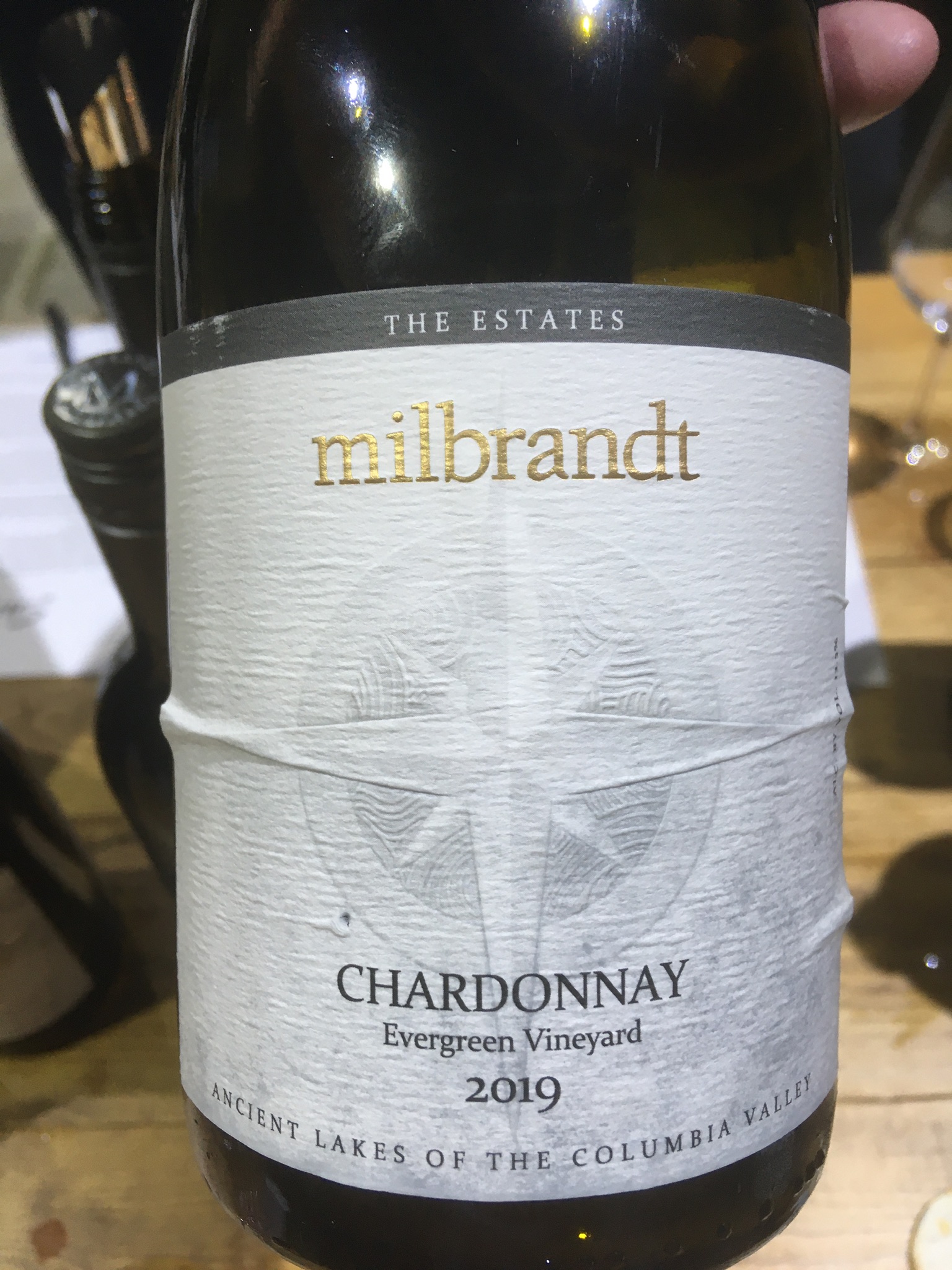 From the Ancient Lakes of Columbia Valley, this was for me far and away the best Chardonnay on show here, with an expected retail price here of around £20-25. Rich, slightly saline, with lots of peach and apricot on the palate, and a firm, balanced nose. Generous and decent. (Looking for importer – Contact Hilltop Wines)

The former Walla Walla valley schoolhouse has now been making its benchmark Semillon with fruit from the Columbia Valley for over 40 years (18% of which is Sauvignon Blanc) and never disappoints. At around £25 a bottle, this is good value, showing complexity and nuance but also lots of freshness and great fruit. (Wine Treasury) 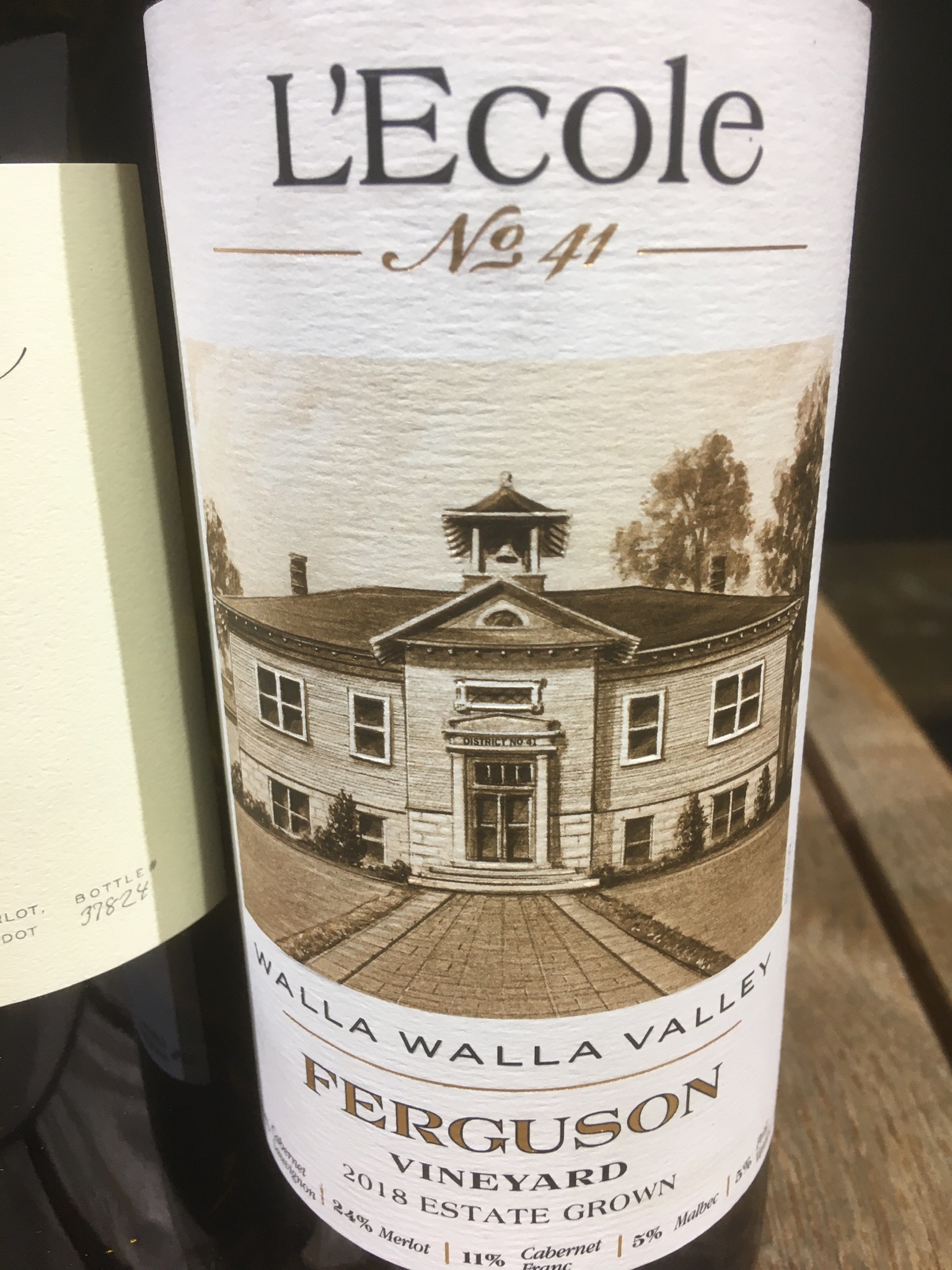 This is one of Washington State’s benchmark wines – a really decent Cab Sav-dominant Bordeaux blend made from grapes grown in basaltic soils, which helps give the wine its slightly tense, nervy character (supported of course by fine tannins and firm acidity). This is a great wine but almost indecently young. One to try again, in a few years time, to see the evolution. (Wine Treasury)

No matter where he is or what he does, Marchesi Antinori can really do no wrong and this long established project with CsteM is absolute proof of that. This 100% Cabernet Sauvignon is tasting great, and another few years will give added finesse and suppleness to an already impressively complex structure. The Red Mountain grapes spend 22 months in new oak but the wine is lush and warming, rather than overwhelming. Usually priced at around £70 a bottle. Recommended.