A tasting of three levels of Rioja from Ramon Bilbao shows how winemaker Rodolfo Bastida is mixing innovation with tradition.

If any mention of the ‘J’ word these days has a tendency to induce a roll of your eyes and slumped shoulders, then, when you are invited to go on a journey with Rodolfo Bastida the director general and winemaker since 1999 at Bodegas Ramon Bilbao to showcase new directions for his exemplary Riojas there can only be a keen sense of anticipation and excitement. 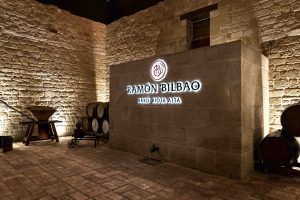 Ramon Bilbao was established in 1924 and has always had a good reputation for its landmark Gran Reservas. Bastida, however, began implementing changes back in 1999 towards a more fruit-driven style with a greater emphasis on terroir.

Traditionally, of course, Rioja has been made by blending grapes from all three Rioja regions (Alavesa, Alta and Baja). But Ramon Bilbao is now sourcing most of its grapes from the Alta region where a higher elevation equates to a shorter growing season (a trend that is being exacerbated by global warming), which in turn produces brighter fruit flavours and a wine that is lighter on the palate.

Yes, oak is still an influence but principally for the purpose of imparting longevity to the wines rather than providing a keynote flavour.

Another factor facilitating this change in style is an increasing use of technology so that the traditional manual sorting of the grapes is now complemented by optical technology that can eliminate not only debris but also defective grapes from the final selection. The result is more purity albeit with lower yields.

The attention to detail is a constant in Rodolfo’s desire to lend personality to his wines ranging from the use of indigenous yeast selections, to testing different coopers to see which forests and toasting methods lend the desired amount of restrained oak influence to the wines.

The 1999 looks, smells and tastes like an old school classic Rioja with the customary secondary characteristics of autumn fruits, leather, spice and tobacco. It’s underpinned by plenty of acidity and fine grained tannins that ensure this wine will continue to evolve and improve for many years.

The 2004 (the ‘perfect’ vintage) still feels quite primary and is notably more forward in style. Aside from the climactic conditions the only other significant variable to 1999 is that the grapes were sourced from higher altitude (circa 200m difference). This is a powerful wine that will clearly age beautifully but for those of us who enjoy the freshness of youth this is already a joy to behold.

The 2009 has similar potential but is still closed and tight.

Then it was onto the Mirto (Rodolfo’s ‘Super Rioja’) from the same three vintages.

The Mirto is 100% Tempranillo and, whereas the Gran Reserva spends three  years in American oak, the Mirto spends two years in new French oak barrels.

As with the Gran Reserva it was the 2004 Mirto that really stood out – perfumed and marrying notes of red and black fruit, the wine has a classic balsamic personality and a gently smoky backdrop, with notes of black pepper, soft herbs and spice. Its acidity is beautifully balanced and the oak adds a lovely restrained creamy profundity to the ensemble.

Many of the best Rioja wineries source their grapes from estate vineyards on the slopes of Mount Yerga which is renowned for having soil that is less fertile and more varied in composition, producing much lower yields and fruit of particular interest. With that in mind, in 2014 Ramon Bilbao purchased a ‘dream’ parcel of vineyards high in the Yerga mountains in Rioja Baja.

The plot is still being explored with soil structures being tested so that the impact of terroir on future production can be better understood. The emphasis here is firmly on producing Tempranillo with more finesse and complexity.

The first fruits of this project were showcased in the final two wines of the tasting from Sectors F and A. Only recently bottled, both wines were from 2014 and are 100% Tempranillo having been fermented in small concrete vats before spending 16 months in once-used French oak barrels.

Points of differentiation were Sector F’s higher altitude and south facing orientation compared to Sector A’s north facing aspect. It was thrilling to experience the purity of the Tempranillo fruit made in such an unencumbered way with Rodolfo’s trademark acidity there to ensure that these wines are built to last.

If this is to be the template for future Rioja production there can be no doubt that current market trends will embrace this new forward style of Rioja from Ramon Bilbao with open arms.