What the Old Vine Project is, what winemaker Anthony Hamilton Russell thinks it is, then Roger Jones tastes a range of wines made from Old Vines that he thinks we should be taking notice of.

South Africa has certainly been trying every marketing trick in the book to break into the UK premium wine market. Be it: Wines Of South Africa, Premium Independent Wineries Of South Africa, WOZANI!, Swartland Revolution, Pinotage Association, New Wave South Africa Tasting, Intrepid South Africa, Cape Winemakers Guild, … and now we have The Old Vine Project that focuses on wines made from Old Vines.

So what’s the deal? Earlier this summer most of the UK’s top wine journalists were enthralled and smitten by the launch of the Old Vine Project at South Africa House in London.

Over 70 wines were on display all based on vines more than 35 years old, although there were a few in the 30 year bracket. The quality was of course superb, not surprising as the wines showcased the cream of the South African wine scene.

Many of the wines featured that day I had followed and collected over the past 10 years and certainly for me I had purchased on taste and reputation of the winemaker not because they were Old Vines.

So what came first? The chicken or the egg? Were these winemakers looking specifically for Old Vines, or were they looking for site-specific areas, accessibility to quality vines in small manageable quantities, cost effectiveness, advice from their mentors… or another marketing ploy?

First, it is important to understand the pioneering work of Rosa Kruger

Before we lose the whole ethos and great work of The Old Vine Project, here is some background on a rather important lady, Rosa Kruger whose pioneering work back in the early 2000s is key to the project. This was when she was working for Johann Rupert, as vineyard manager at L’Ormarins – Anthonij Rupert Wyne’s flagship company has L’Ormarins, Cape of Good Hope, Terra Del Capo and Protea labels under its belt as well as many other commercial interests.

Wyne allowed and encouraged Kruger to look for special sites and Old Vines across the Cape as Kruger had become engrossed in Old Vines by her wine travels to Europe, tasting the uniqueness of old vine wines.

In 2002 Kruger went on a fact-finding safari in search of Old Vines in every corner of the Cape, ending up on the West Coast, where Eben Sadie’s Skerpioen was born. Eben was encouraged by Kruger’s enthusiasm and launched his own “Old Vine Series” in 2009, famously represented by labels designed by William Kentridge.

Kruger encouraged other winemakers to follow suit, she set up her own website “IAMOLD” (currently being revamped), this website highlighted vineyards of at least 35 years of age, however getting accurate information was reliant on farmers’ word as the South African Wine Industry Information & Systems (SAWIS), the official stats board, would not divulge these details until as recently as 2014.

Kruger explains what Old Vines mean to the winemaker and wine industry:

“Old Vines make wines that reflect the earth and the terroir they grow in. They reflect the scorching summers and the long icy cold rainy Cape winter days they have endured over decades. They exist because of the people who touched and tended them over many years.”

“Wines from Old Vines reflect the vast and varied landscape of South Africa – from the red sandy soils at Skurfberg where the winds of the Benguela Current cool the vines in summer, down to Cape Point, into the beautiful shrubby Klein Karoo, to the slopes of the Helderberg and as far as the dry arid region of Oudtshoorn.”

“Old Vines often reflect the lives and the culture of the people – the fishermen on the coast, the sheep farmers inland, the wheat farmers of the Swartland and the fruit farmers of Piekenierskloof – and are often preserved by sentiment rather than budgets.”

“Old Vines and the wines they make are a monument to the farmer’s love of his land.”

In 2016 Johann Rupert agreed to sponsor The Old Vine Project, with ex WOSA employee, Andre Morgenthal heading up the marketing, and viticulturist, Jaco Engelbrecht helping farmers look after their Old Vines sustainably with, of course, Kruger still very much involved.

Their website www.oldvineproject.co.za is full of up to date information on the project. More importantly Rosa has encouraged and educated people like Jancis Robinson MW to become aware of the importance and quality of Old Vines to the South African wine industry.

So there we go Old Vine Project explained, but does it answer all the questions?

Rosa Kruger, naturally enough, believes that they do.

“I believe they very often do. Age in vines brings intensity, a perceived freshness, a texture and a sense of place. They show less fresh fruit and varietal character, and more terroir and soil.”

I asked Anthony Hamilton Russell his views, a gentleman who undoubtedly has made a huge mark on South African wine, especially in the early years when there were so many barriers, and continues to fly the flag worldwide promoting the industry.

So Anthony, are Old Vines marketing or vision?

“I don’t believe that these initiatives are cleverly pre-conceived marketing angles, as much as they developed out of noticing what wines and behaviours generated the greatest interest with opinion-formers and consumers.”

“Behind all of them have been a small handful of people, or even just an individual, initially doing something really good that has attracted interest and the movement has built around them. South Africans are not really the best marketers in the wine world!”

What lies behind the quality and interest in Old Vines?

Anthony Hamilton Russell believes that there are three key factors behind the interest in wines made from Old Vines, plus some genuine reasons as to how Old Vines change the nature of the wines themselves.

“The interest in old vineyards in particular derives from several things: Firstly, there is a certain amount of natural sentiment towards a venerable old vineyard which helps to build an attractive story behind a wine. Secondly, there is a common belief (not always, but often, well-founded) that Old Vines make better wines. This helps with the credibility of an Old Vines wine. Thirdly, the fact that the vineyard has survived as long as it has is likely to mean that the economics were acceptable to the farmer over a long time period and the vines are “happy”. This in turn probably means that the grapes are known to be pretty good and actually are, as most of the Old Vines farmers sold grapes and did not make wine.”

“And finally, and to me the most important point about the attractions of Old Vines, they are more marginal (often even slightly diseased) and less aggressive ripeners of grapes. Phenolic ripeness can be achieved at lower alcohol and with a more elegant, origin-expressive and less overt uni-dimentional fruit-driven style. This is a style that has far more appeal to sophisticated consumers.”

Anthony Hamilton Russell also believes there to be a commercial factor at play here, allowing younger winemakers to make wine with less risk:

“It has actually been a great advantage to this new wave of producers to be tiny, often landless and undercapitalised. Our so-called “young-guns” are less “men-at-arms” than men-without-farms.  Instead of trying to make a defined and expensive piece of land work for whatever they would like to make, these winemakers are able to scour the Cape for the best parcels which have empirically demonstrated their potential, and only buy exactly what they need and can afford. Each variety they work with can come from the best sites in the Cape for that particular variety and they are not compelled to take more than they can sell. They face a lot less risk.”

And now to tasting the wines themselves:

I am of course biased as I sell many of these wines and, continually get exposed to new offerings from young up-and-coming winemakers who are reaping the benefit of the Old Vine Project, whether they are part of the project or not. The buzz has certainly spread and now to most people Old Vines reflects exclusivity, premium, and a price range that they are happy to pay higher for.

Winemaker Jocelyn Hogan Wilson makes a stunning 100% Chenin from 40 year-old vines, textured, rich, pear, quince, orange, touch of ginger, there is a lovely wet river stone on the finish to keep it fresh, this will age beautifully.

Labelled as 100% Steen (original African name for Chenin), a stunning masterly purity of a wine made by wild man Adi Badenhorst. Sourced from 50 year-old vines this is truly an amazing wine, rich and opulent, rare and definitely a wine to treasure. 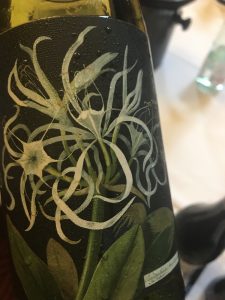 Virginia Povall is a remarkable American lady who fell in love with the South African countryside and set down roots there. She has been hitting star quality wines in recent years, sourcing from all over the Cape. You should check out her Pinot Noirs. This particular wine is her best Chenin to date from 50 year-old vines, textured, layered, beautifully precise stone fruit, great expression – this is pure art.

Peter-Allan Finlayson made his name not only for eloping from University but making incredible fine Chardonnay and Pinot Noir under the Crystallum label. Recently in search of a home for his ever-growing wine production, he married into the Gabrielskloof family, in traditional African folk law to receive land!

Here he has developed his amazing winemaking into an art, producing an array of different labels, not least this 35 year-old vine Elodie Chenin, citrus and white flowers on the nose, delicate, restrained, on the palate opens up with delicate pineapple, pine nuts and a lovely waxy feel. 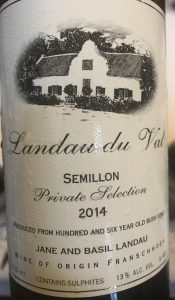 Made by Rickety Bridge’s young talented winemaker Wynand Grobler, this is a wine that is worth searching for, a truly amazing Semillon, you can try his Road to Santiago Semillion imported to the UK by Kingsland Drinks, but the Landau is special. 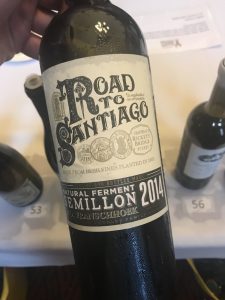 The vineyard is owned by Basil Landeau, and the plot established in 1905 is only 4 hectacres, Wynand makes the wine free of charge for Basil to protect the history of this unique vineyard. Stone fruit with some spice, creamy, but fresh a real classic.

I could wax lyrically about all 70 wines and list another 70 which were not there, but what we have learnt is, that whatever the label, these Old Vine wines are a masterly product that will elevate South Africa even further up the premium wine market.