Faugères may be a small appellation in the Languedoc but its influence spreads far and wide – from the quality wines it makes on 100% schist soil to the Fine de Faugères brandy which has just been revived by enthusiastic winemakers. Its 10 year Fine Wines by Nature programme, which is at its halfway point, is also bearing fruit and is a lesson to many other regions on how to implement an agri-environmental programme. Peter Dean travelled to the region and got to know the wines and the winemakers over a feast of wild boar at Domaine Ollier Taillefer.

Faugères may be a small appellation in the Languedoc but its influence spreads far and wide – from the quality wines it makes on 100% schist soil to the Fine de Faugères brandy which has just been revived by enthusiastic winemakers. Its 10 year Fine Wines by Nature programme, which is at its halfway point, is also bearing fruit and is a lesson to many other regions on how to implement an agri-environmental programme. Peter Dean travelled to the region and got to know the wines and the winemakers over a feast of wild boar at Domaine Ollier Taillefer.

It was fitting that the meat in the bubbling cauldon of stew that took two women to carry to the full table of vignerons was wild boar. Sangliers, as they are known in France (and probably called a good many other things) are a real pest and create considerable damage to the vineyards and livelihoods of the independent winemaker in this fascinating corner of the Haut-Languedoc.

A small herd of sangliers can strip an entire hectare of vines overnight – they are not fussy –  the grapes could be any one of the five red grape varieties or six white varieties permitted in AOP Faugères. So there was a sense of poetic justice as a long table of vignerons chomped their way through one of their bête noires, washing the rich meat down with lashings of wine made from the grapes this particular boar didn’t manage to consume. Payback time. 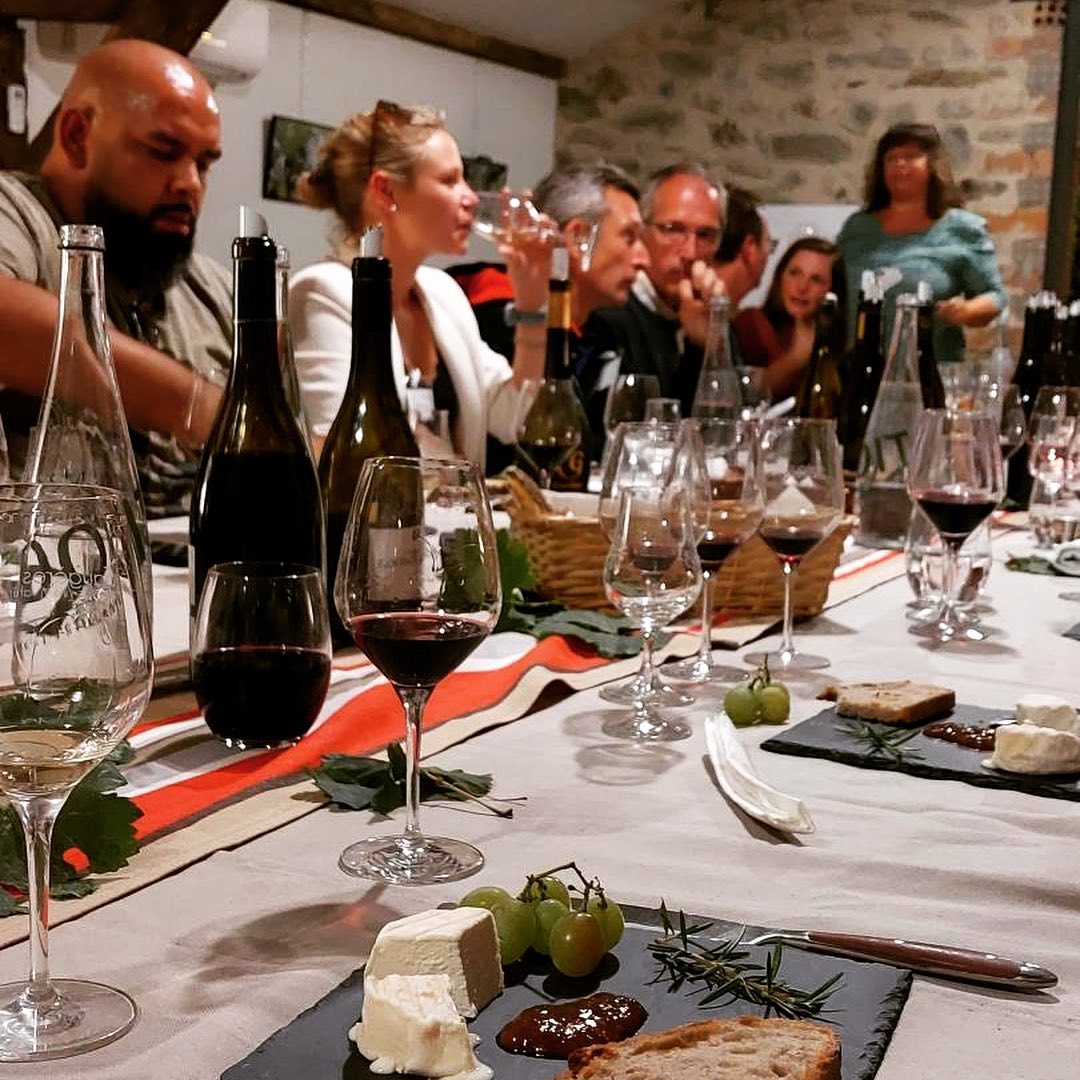 I am at the home of Luc and Françoise Ollier in the hilltop village of Fos, one of seven villages within this small, artisanal-style appellation that lies at the foot of the Espinouse in the eastern-central part of the Languedoc – the whole Faugères region only covers 5,000 hectares, 1900 hectares of which are planted to vines.

This range of hills is significant in that it shields the area from cold Northerly winds from the Massif Central which, combined with the 400m high, South and South West-facing slopes towards the sea 30km away, creates a classic Mediterranean climate for viticulture. It is the ideal growing environment for the Rhône varietals Syrah, Grenache and (late-ripening) Mourvèdre that, together with Cinsault and Carignan, make up the rich, classic reds of the region. 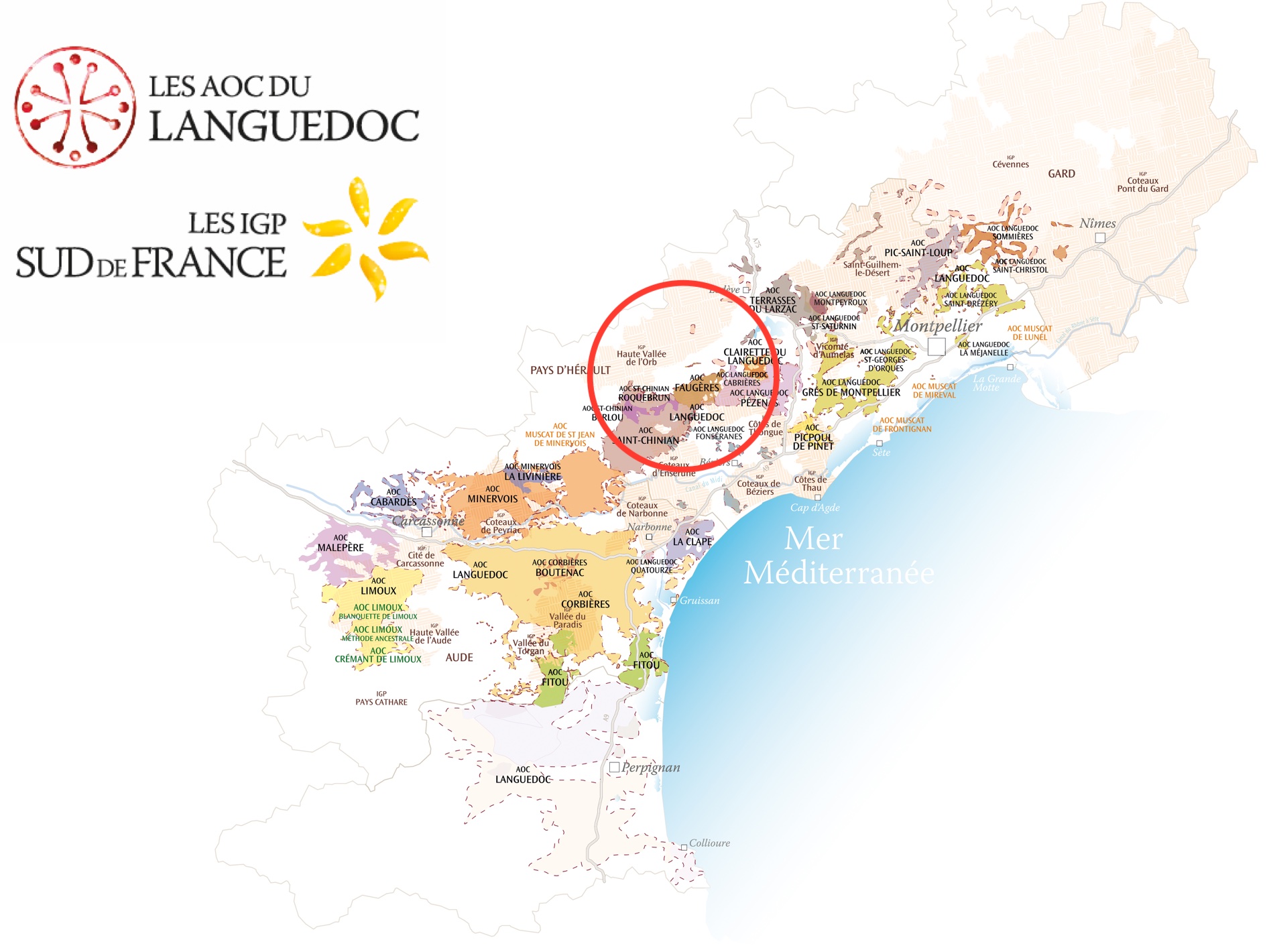 The countryside that is not planted to vine is protected and unspoilt scrubland, rolling hills covered in garrigue and maquis, their potpourri of aromas filling the nostrils in summer to the tune of cicadas in the hot sun.

“The winegrowers on the plains once thought that their counterparts in Faugères were mad to want to farm this relatively arid land. But the winegrowers of Faugères were not fazed, convinced they could produce very fine wines with unique characteristics… in short that Faugères offered an exceptional terroir,” explains Nathalie Caumette, chair of the local winegrowers association.

What made the land so difficult to farm is ironically the ‘strongest suit’ of the vigneron’s hand – schist, the bedrock that is porous, leads to infertile soil and means that the vine’s roots need to travel deep to find nutrients and water to survive. Ideal for winegrowers. Faugères is 100% schist, the only appellation in the Languedoc to be defined by a single terroir. And although schist is plentiful throughout the Languedoc it is this exclusivity of total schist that makes the wines of Faugères distinctive, in a region renowned for its variety of wine styles.

Rosemary George, author of Wines of the Languedoc and Wines of Faugères says that distinguishing the wines of Faugères with, say, neighbouring Saint Chinian is not always easy to determine to the untrained palate and can be influenced more by producer style, use of oak and exact grape variety blend. “I once did a comparative tasting of Faugères and St. Chinian for the Maison du Languedoc and cannot say that I came to any great conclusions, neither did my audience. Maybe the wines of Faugères are a little fresher and a little more elegant than St. Chinian,” says George.

Françoise Ollier, my host for the evening and Caumette’s predecessor at the head of AOP Faugères agrees that freshness is the key.

“The freshness is more important in Faugères’s wines because there is more wind and a higher altitude over a large part of the appellation. In the Languedoc, this freshness is a real asset, given the temperatures we can have here. In addition, the schist gives the wine very smooth tannins and a lot of minerality,” she says.

Moving the region onwards and upwards

While the reds of Faugères make up 79% of its output, the whites, rosés and recently-revived brandy are well-kept secrets – the feast at Domaine Ollier Taillefer being bookended by tastings of all three. Before we sit down for the daube de sangliers, however, 15 vignerons show a variety of whites and rosés, alongside a range of locally-sourced produce that includes olives, magnificent smoked salmon and a duck saucisson that defied description.

The room is charged with a camaraderie amongst the winemakers who become increasingly keen on showing particular cuvées – ones which had had some ageing in amphora and so on – with some of the white wines being truly extraordinary.

“The region has become more confident, wiser and more grown up. It is not only that work in the vineyard and cellar has improved dramatically but also that the atmosphere has changed with a buoyancy and optimism apparent,” notes George.

The archetypal vignerons dinner which followed had an abundance of red wines in all manner of styles but all having that freshness and elegance at their core. 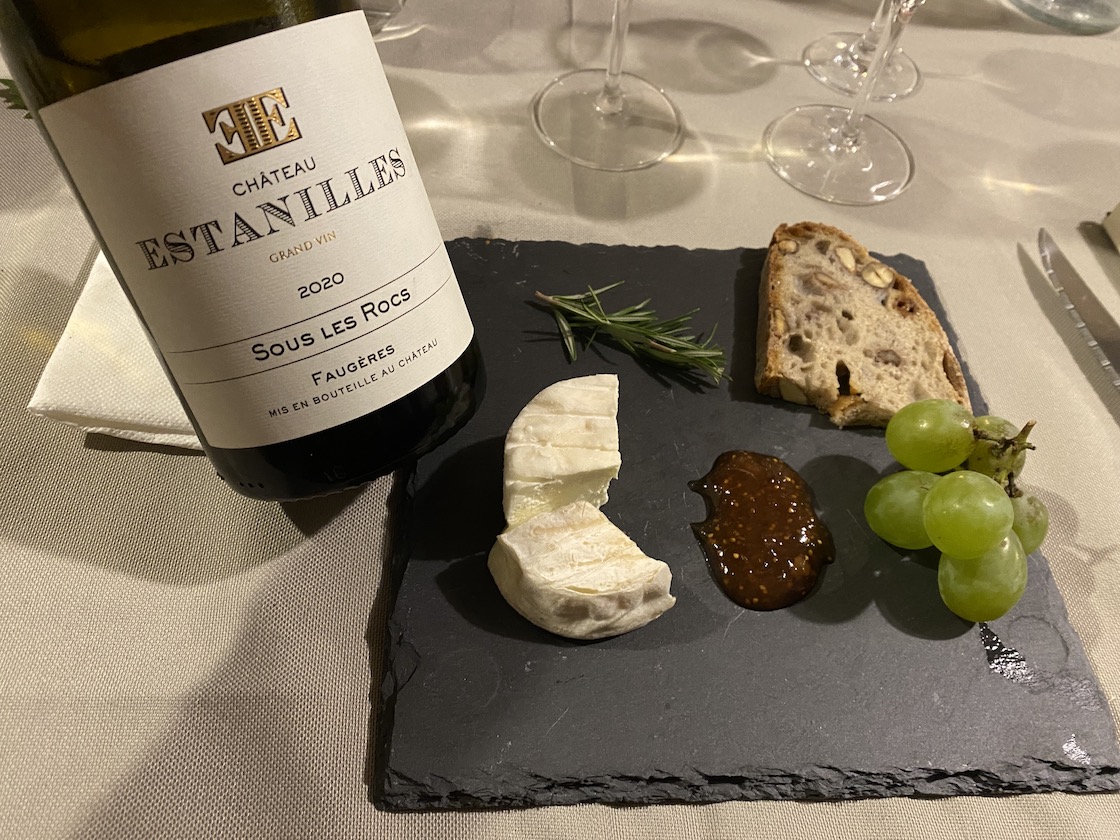 To give the evening some historical context, Luc and Françoise are fifth generation winemakers at Domaine Ollier Taillefer, which is and has been a key estate in the history of Faugères. 80 years ago the domaine was instrumental in pushing for the formation of a regulatory body to help move the region on quality-wise. Their grandparents were one of three families in Faugères that came together in 1939 to try and set up some controls on a region that suffered, as did most of the Languedoc at that time, from the overproduction of bulk wine.

The war intervened but gradually over the years limits have been put on the yield and acreage until 1982 when AOP Faugères was formed for red wine (2005 for white) and quality control was enshrined in law.

Although the current ceiling on yield is 45 hectolitres per hectare for red and white wine and 50 hl/ha for rosé, today’s average yield in Faugères is in reality closer to 30 hectolitres per hectare, the schist soil largely dictating this. To put that into an historical context and give an impression of the scale of the region’s overproduction in the past, in 1869 the average yield was 68 hectolitres per hectare which was being produced from a colossal 220,000 hectares. As you walk round Fos almost every household has signs of winemaking having been an integral part of life here – arched side entrances on the houses to take the barrels.

One of the reasons for winegrowing on such an enormous scale was that 60% of all grapes grown were being distilled into the Fine de Faugères brandy that put Faugères on the map long before its reputation for making fine table wines. Who knew? This brandy was laid down in imperial cellars under Napoleon but went out of fashion and was eventually mothballed in the 1980s only being relaunched as recently as 2000 by a small group of enthusiastic winegrowers keen to connect with the past.

Wines are distilled twice in a Charente/ pot still then matured between five to 10 years in oak barrels, developing fruity, saline and tobacco leaf aromas. All this was revealed at dinner when a selection of local brandies were served with dessert, which was a ‘rhum’ baba made with Fine de Faugères. The brandy was outstanding and had a real point of difference with a story to tell, sommeliers take note. 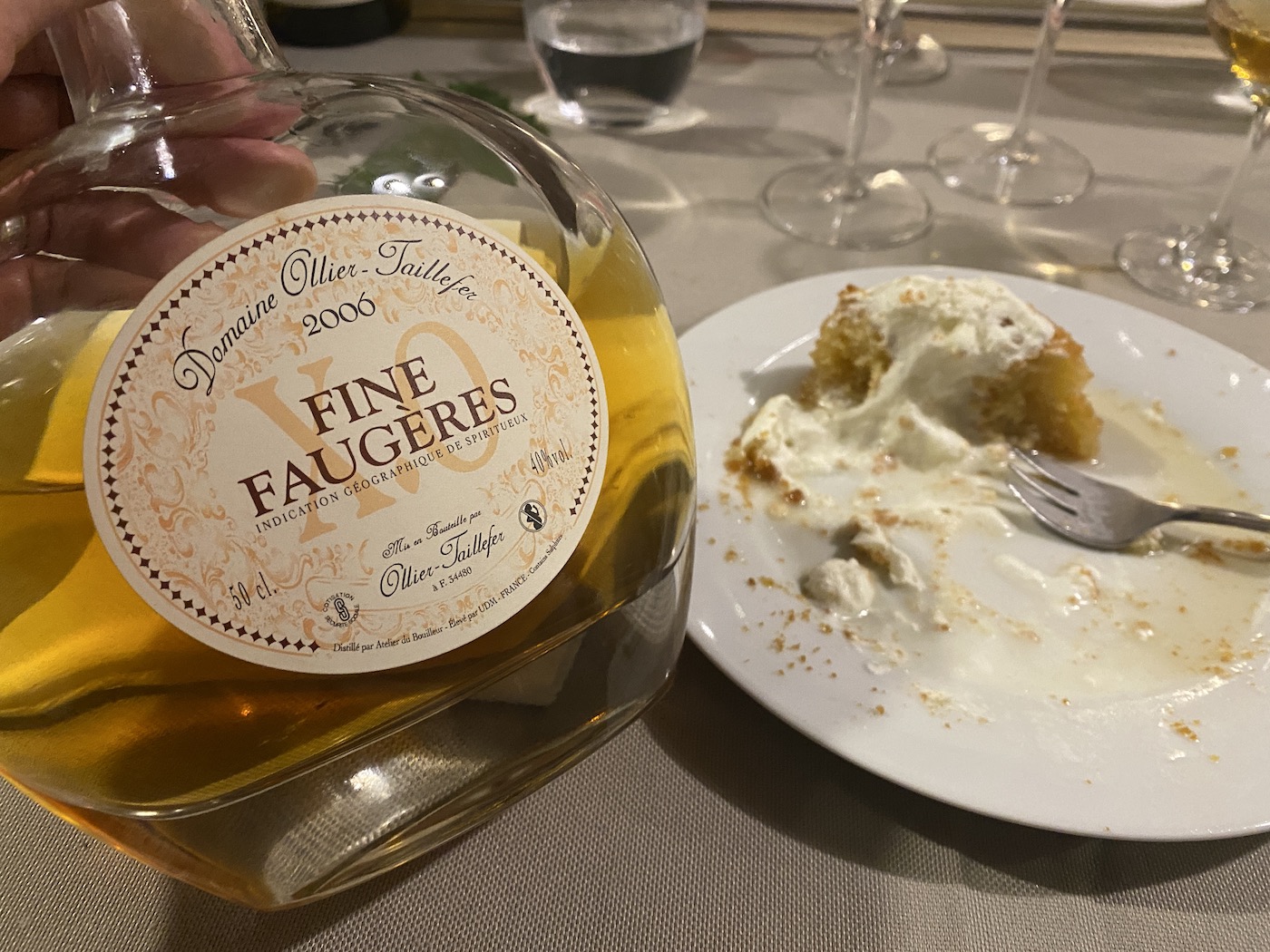 The Languedoc is a vast wine region which, combined with the Roussillon has three times the vine plantings of Bordeaux, for example. But if there is one thing that is consistent across a region with so many differences is that it has the ability to constantly surprise you. Fine de Faugères being a prime example.

Rosemary George refers to the region as being “a melting pot of dynamic attitudes, with an extraordinary enthusiasm and energy amongst the wine growers,” and that could not be more apt when describing the winemakers in Faugères who, despite being a relatively new appellation are way ahead than many other wine regions regarding its commitmnent to agri-environmental farming.

Recognising the need to protect and optimise the natural potential of its vineyards Faugères started in 2017 a 10-year plan called Grands Vins de Nature (Fine Wines by Nature) which aims to reach a number of agri-environmental pledges most notably to completely eradicate the use of herbicides and insecticides across the entire appellation. Halfway through, in 2022, the plan is on course and has hit its 5-year KPIs with 50% of vineyards involved in organic viticulture and 83% of wineries having at least one agri-environmental commitment.

There are a number of measures in place involving permanent grass cover on the headlands, mixed farming and restoration of dry stone walls to help prevent soil erosion. In, what is alleged to be a first for France, it also has two collective washing stations for agricultural equipment to help preserve water quality.

“It is an appellation dynamic,” says Nathalie Caumette who sees winegrowers here wanting to move the appellation forwards towards “an ideal of winegrowing in harmony with nature.”

“Today, the appellation has collectively decided to place ‘nature’ back at the very heart of the concept of terroir and to make it a watchword.”

“And Faugères is ahead of its time… in 2008 the appellation had its specifications amended to include agri-environmental measures: a ban on blanket spraying with chemicals, restrictions on mineral nitrogen inputs, mandatory grassing of headlands. It was laborious, INAO (Institut National de L’Origine et de la Qualité) was quite reluctant, but we succeeded: this huge step forward already predates 14 years.” 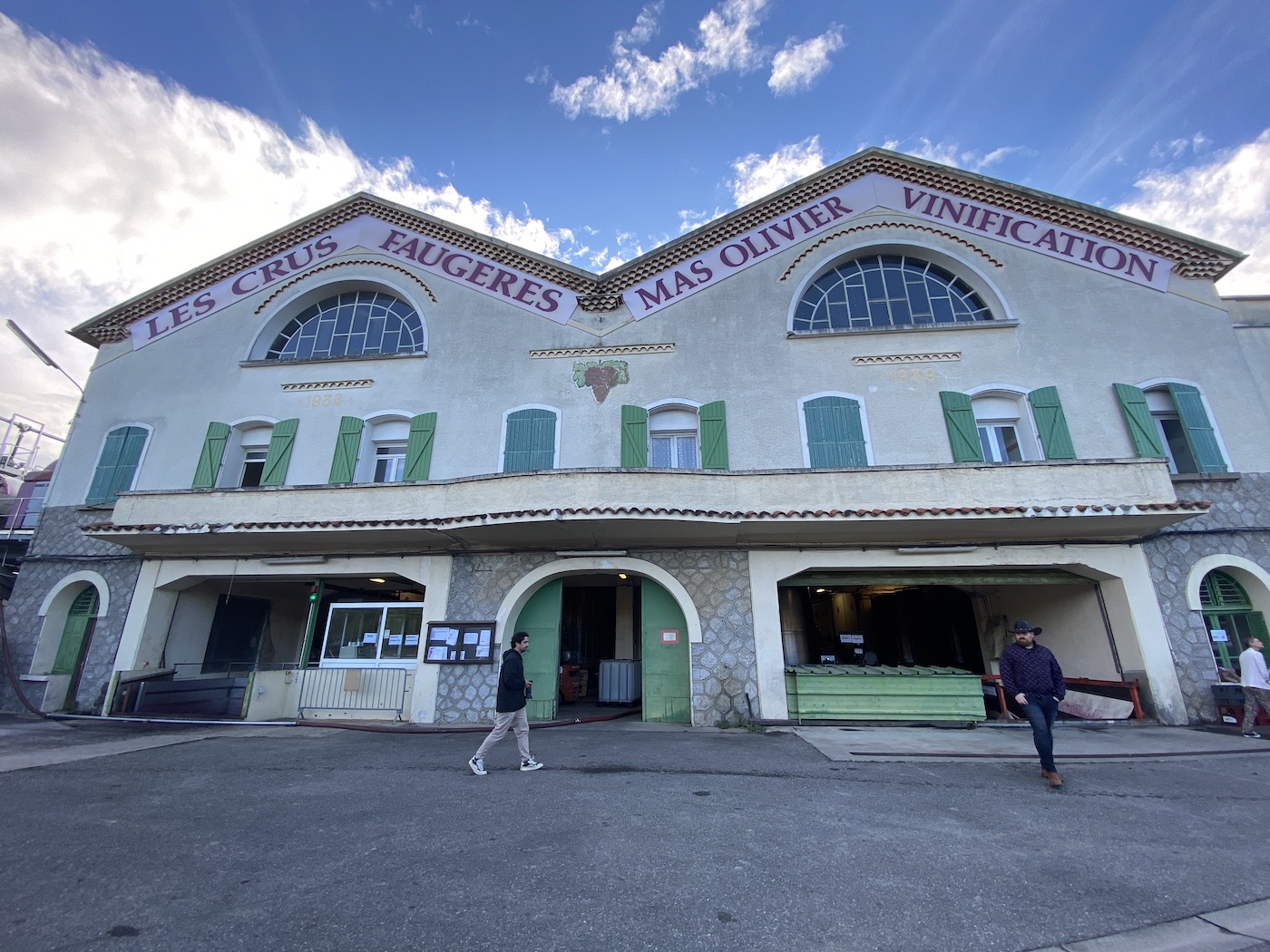 Part of the challenge is to convert the 70 winegrowers that supply the region’s one and only cooperative Mas Olivier Les Crus Faugères that accounts for 50% of the production of the entire AOP. The company’s own vineyards have been converted, with a line of Organic wines being produced, next up is the job of convincing the small freeholders to follow suit who are financially encouraged to do so.

What is certain is that the vignerons of Faugères have already made great strides in terroir-driven winemaking that is respectful of the environment that sustains them. For wine buyers – trade and consumer – this is a region that is a treasure trove of quality wines that can be extremely good value, and speak of the place that they come from.

The visit to AOP Faugères was part of Languedoc Wine Camp which you can read more about here.

Françoise Ollier has also just taken on the presidency of Vinifilles, a women-only wine association to support women winemakers managing vineyards on their own. Read more about them here.