“At Luis Cañas, being green is not a marketing trend – it is our philosophy and the key to success,” says Juan Luis Cañas.

Half a century on from a chance meeting that led the family to bottle their own wine rather than send it to the local co-operative, the story of Luis Cañas, the leading Rioja Alavesa producer, has been nothing but a heart-warming one. The bodega’s remarkable development has been such that it is now one of the most progressive in the region, with the latest release of its top labels at the end of April underlining how good its wines are.

First, though, more on that chance meeting in 1970, as told by Juan Luis Cañas. “My father, Luis, was drinking our wine with friends in the village square one day when a man stopped and asked to taste,” he said. “It turned out the man was the president of a famous gastronomic society. He and his members returned and asked for more, and that led to Luis Cañas being the first grower to bottle his wines in the region.”

Sales soon took off, and in 1994, Luis Cañas opened a new winery with state-of-the-art equipment, and five years later, a new barrel cellar was built. Then, in 2006, a purpose-built, fully equipped accommodation block was constructed for the entire vineyard team.  For nowhere is the feeling of family more apparent than at this bodega, where Juan Luis has carried on his father’s legacy since his passing in late 2019. His own son, Jon, works alongside him.

The estate’s 270 hectares on predominantly limestone-clay soils, which are home to some very old vines, are farmed organically. The focus is on small single plots, which number as many as 870 and produce terroir-driven wines with a real sense of place. And what is especially interesting about the bodega’s viticultural approach is the extraordinary number of different clones of each varietal it has experimented with in its quest to find the ideal one for particular sites. They are worth recording: Tempranillo 167, Graciano 53, Granacha 34, Viura and Malvasia Riojana both 24, Bobal 14 and Calagraño 5.

“This is the focus now and in the future,” Juan Luis says. “I was born in Rioja Alavesa, and I believe in its future and its past. We realise nature is the source of success, and strive to maintain the privileged characteristics it has bestowed on our vineyards. At Luis Cañas, being green is not a marketing trend – it is our philosophy and the key to success.”

Respect for forgotten varieties, and the reality of climate change, has led Juan Luis to replant or preserve small amounts of Marufo, Aramon, Calagraño and Santa Magdalena. “My preference is for higher altitude sites and longer-growing cycles, along with fermentation in concrete eggs or small tanks, and careful use of wood,” he added. “Minimal intervention and trying to get a sense of the soil; a return to specific plots and to what used to be done.”

Juan Luis is the force behind the family’s Bodegas Amaren wines, also from Rioja Alavesa, which were first made in 1995 as a tribute to his mother, Angeles, and are only produced in the best years. A telling indication of the quality of Amaren (from the Basque for “of my mother”) is that they feature on the wine list of five of the seven Michelin 3-star restaurants in Spain.

A really interesting white is the Amaren Malvasia 2016, which is a 100% single varietal (Malvasia Riojana) made from vines planted in 1921 on very poor soils at 550m. Fermented in concrete eggs, the wine spends 14 months on the fine lees giving richness. Minerality from chalk soils is a feature, while Juan Luis says a compulsory two-year-in-bottle period before release helps to accentuate aromas of flowers and camomile.

Two red Amaren labels from the 2017 vintage showed outstandingly well. The Carraquintana Viñedo Singular (single vineyard), which comes from three parcels planted in 1930, 1940 and 1962, is a field blend of Tempranillo, Garnacha and Malvasia which are co-fermented. No new oak was used for maturation, which involved 14 months in five-year old 500-litre French puncheons. The El Cristo de Samaniego de Amaren 2017, another field blend of the three varietals above but also featuring some Viura, comes from a very high single vineyard, 625m above sea level on the slopes of Sierra de Cantabria.

Three Bodegas Luis Cañas labels were no less impressive. The beguiling El Palacio 2017, the closest vineyard to the cellar in Villabuena de Alava, is another field blend of vines planted in 1969 on 2.6h of bush vines on three different terraces, which face north, west and north-west. In the process of being classified a single vineyard, it again showed a real sense of site with its thyme, rosemary and garriguey notes. The superb Camino Leza 2017 likewise came from a field blend of vines planted in 1965, with the Tempranillo from a very low-yielding clone. It is made up of 1% of the rare Calagraño grape, along with some Viura and Malvasia Riojana. Finally, the excellent Luis Cañas Reserva 2015 was made from slightly younger Tempranillo and Graciano vines with an average age of 40 years. 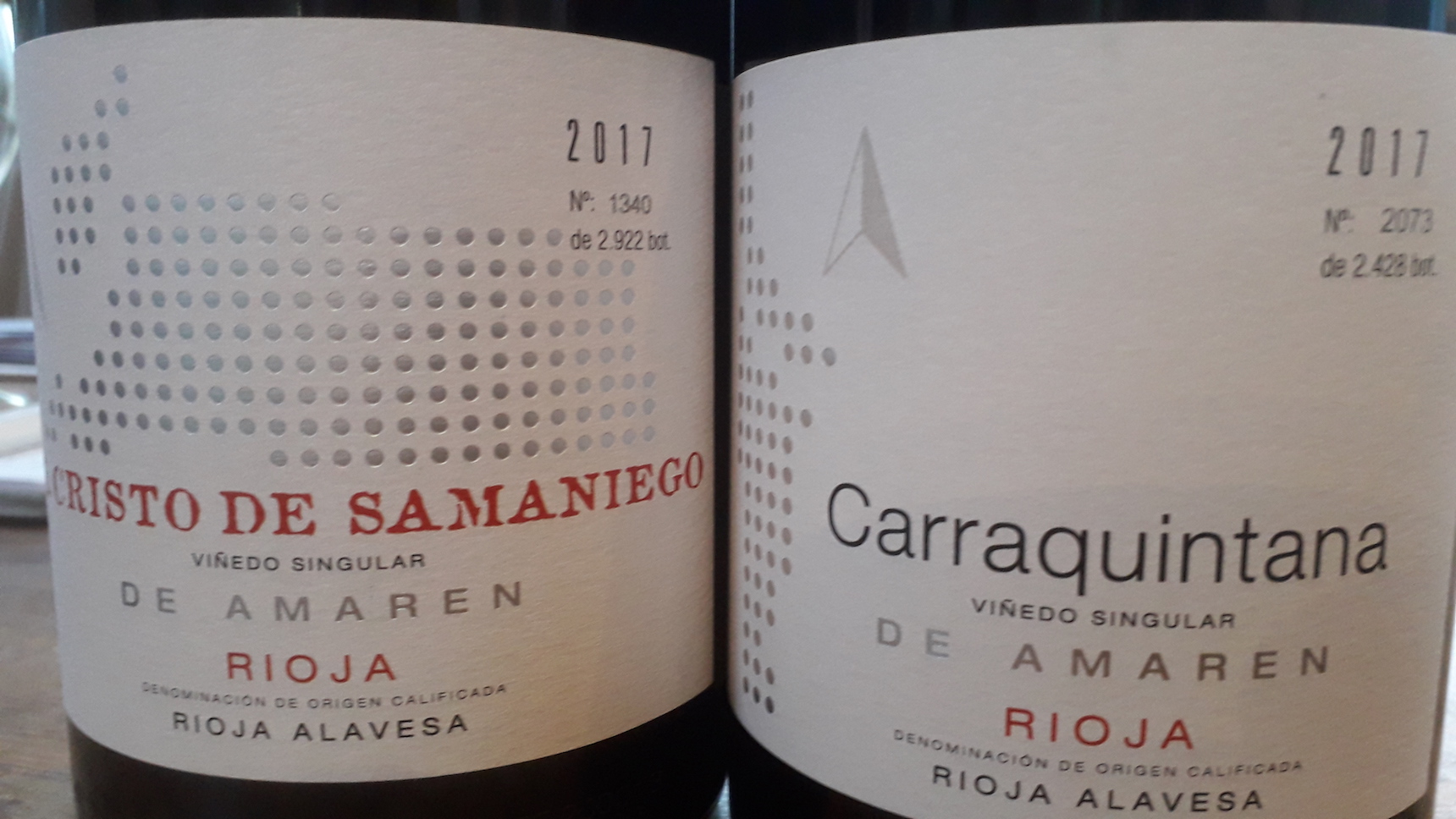 Amaren Malvasia 2016, Rioja DOC, 13.5% abv, RRP £35. Delicate floral aromas of orange blossom, nutmeg and brioche. Pineapple and pear notes with some balsamic traces. Fermented in concrete eggs with 14 months on lees giving fullness and richness. Freshness from a low pH of 3.25 ensures the  wine is well-balanced. 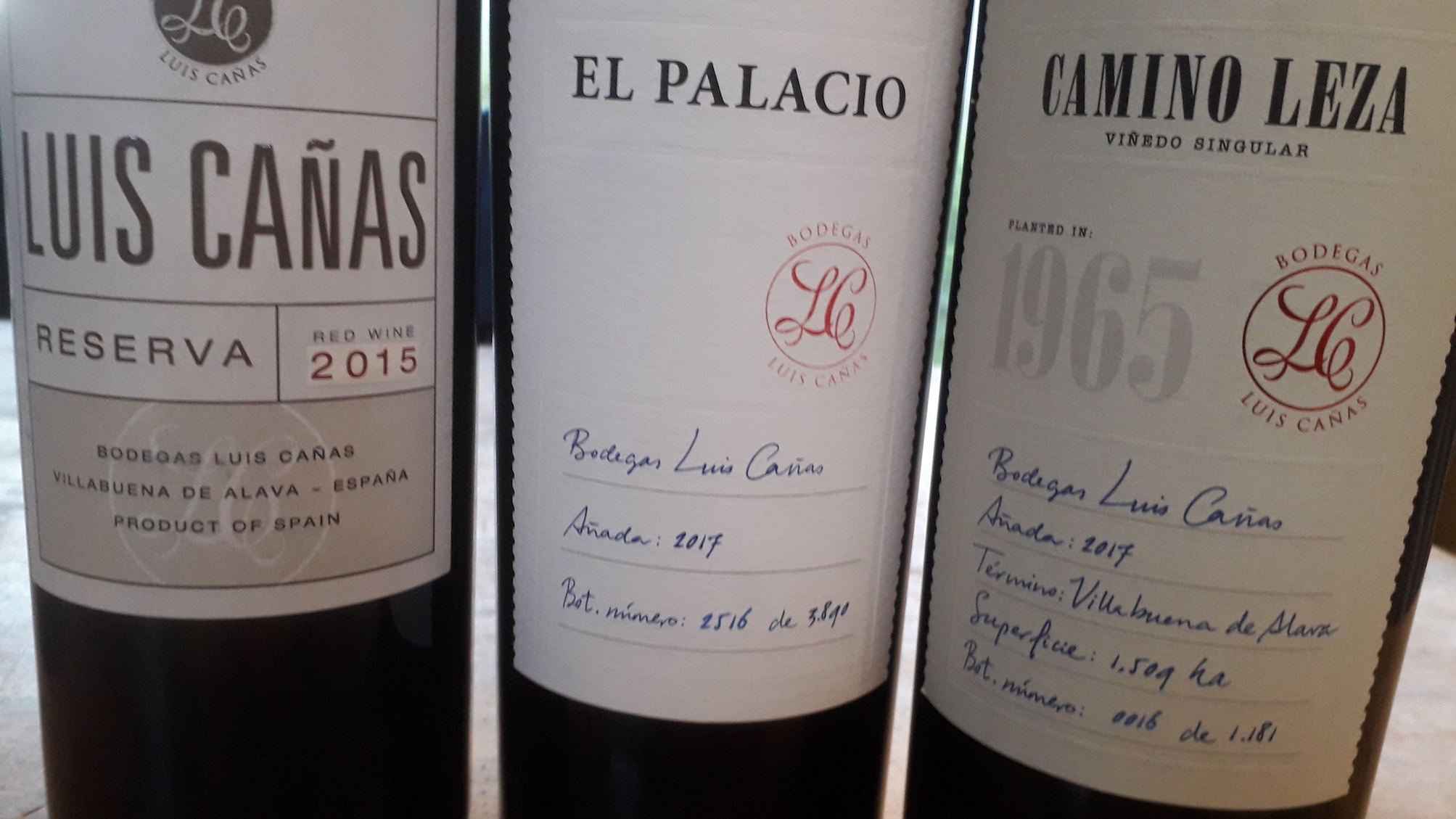 Camino Leza Luis Cañas 2017, Rioja DOC, 14.5% abv, RRP £65. Incredibly intense expression of Tempranillo, with quite overt yet silky tannins. Low pH of 3.78 gives very bright acidity and helps balance the wine’s powerful structure. Red fruit and blackberry notes with tobacco and spice on the nose. Touch of Viura lifts the tannins. Memorable concentration and length, and already a delight to drink notwithstanding its long cellaring potential.

El Palacio Luis Cañas 2017, Rioja DOC, 14.5% abv, RRP £52. Distinctively different from the Samaniego and Leza sites. Elegant and wonderfully harmonious, it has concentration and personality from the Tempranillo (75%), colour, vibrancy and freshness from the Graciano (20%) and some richness and creaminess from the Viura (5%). Deliciously meaty with masses of concentrated cassis-like fruit but with a bright raspberry edge too. Notably complex and long.