New Zealand Part 2: Making the most of the US opportunity

The first part of our business strategy debate into the future of New Zealand wine, organised by New Zealand Winegrowers, focused on its immediate needs to come through its short 2021 harvest, the ins and outs of having an over reliance on Sauvignon Blanc and its premium image around the world. In part two we look at how it can maximise and build on its strong premium credentials in the ultra competitive US wine market with Rob McMillan, chief wine analyst with the Silicon Valley Bank.

The first part of our business strategy debate into the future of New Zealand wine, organised by New Zealand Winegrowers, focused on its immediate needs to come through its short 2021 harvest, the ins and outs of having an over reliance on Sauvignon Blanc and its premium image around the world. In part two we look at how it can maximise and build on its strong premium credentials in the ultra competitive US wine market with Rob McMillan, chief wine analyst with the Silicon Valley Bank.

New Zealand’s growth strategy is based on building distribution and market share in key markets around the world. None more so than in the United States where it has been able to establish itself as one of the leading premium wine producing countries gaining more listings both with major retailers and with restaurant groups.

If it is to gain more sales it needs to find more importers and distributors willing to introduce New Zealand wines to their customers.

Rob McMillan, from the Silicon Valley Bank, was able to give insights both on the US wine market, but also how New Zealand is performing as a category there.

He says the key driving factor in the US over the last two years has been the big switch to online, both in terms of retail spend, but also direct with wine producers. “It’s just exploded in the United States – up 100 to 200%,” he says.

Crucially that big switch that happened to online in 2020 has been maintained in 2021 and online shopping for wine is clearly here to stay.

It has also been a more polarised market, with the bigger producers with strong off-trade distribution doing much better than those that were over reliant on the on-trade going into the pandemic.

The US wine and spirits markets have enjoyed mixed fortunes over the last year following the opening up of hospitality and business in around February 2021, he adds. After an initial boom for both, it has been spirits that has continued to grow and benefit from a longer tail wind of growth post lockdown that wine has. By contrast wine is down around 6% in volumes, and 9% for the last three months.

“That’s a big surprise to me,” admits McMillan.

“The American consumer is going through quite a change. We have gone through about 25 years where the boomer generation has lead everyone into this wine category. Now we are at this point where the median boomer in the US is 66, which is retirement age, so we have to do a better job at recruiting the younger consumer,” says McMillan.

He points to recent consumer research from Silicon Valley Bank where it asked people from different age groups to state what beverage of choice the would take to a party. The results were very revealing. For the 65 plus age group half said they would bring wine, the rest was split across other categories. But then look at 55 to 65 group wine drops to 30% and they are more “ambivalent about whether they are going to bring wine or beer”.

Interestingly 2021 was the year that McMillan and Silicon Valley Bank predicted some 10 years that Generation X would actually replace Boomers as the number one most important age group for wine consumption. 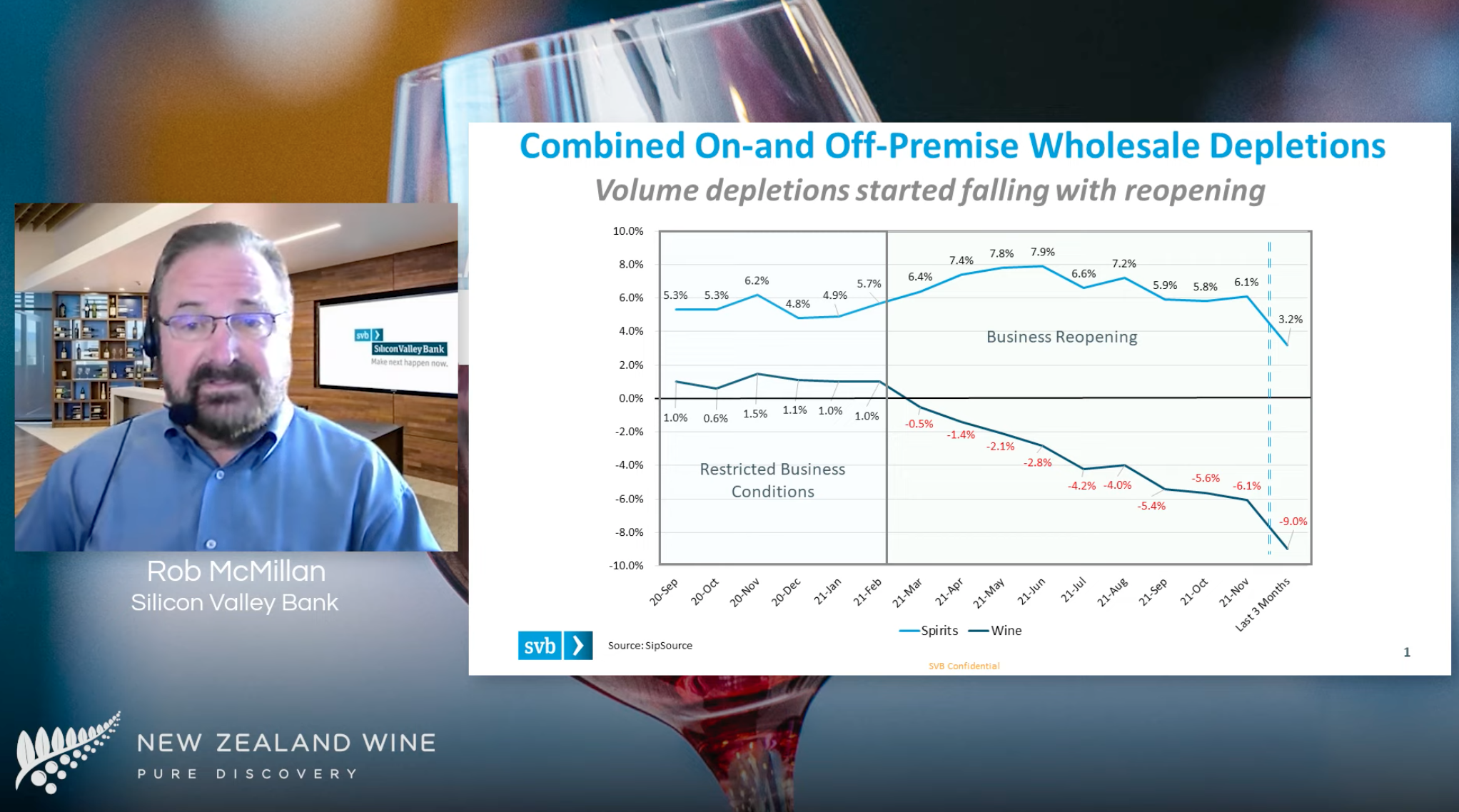 It’s clear, he adds, the wine industry has to do more to promote and market itself better to younger drinkers. The hard seltzer category has come from nowhere in the US as it taps into people’s concerns about health by telling them how many, or how few, calories there are in a can. Yet wine is still arguing the case for not having to put calories on the label.

“They don’t know how many calories are in a bottle of wine. That’s a big deal. We have to move away from talking about gracious dining to showing mansions, to having fun. We have to change the vision in order to attract these consumers that have values that matter to them.”

The big category for wine growth is Generation X which he did actually predict would be the case some 10 years ago.

The big overall influencing factor, however, remains the supply chain which has been particularly badly hit in the US, across all business sectors. He says it has taken close to 18 months for him to refurbish his kitchen and he is still without stove. The same applies to producers who are constantly without key raw materials from bottles, to cardboard, to capsules, labels and more.
That’s before you factor in the increased time and vastly increased costs for transportation.

All of which means price increases this year on wine to both the trade and to the consumer to compensate. He says in 2021 36% of producers said they would increase wine prices, in its 2022 report that has jumped to 72%. 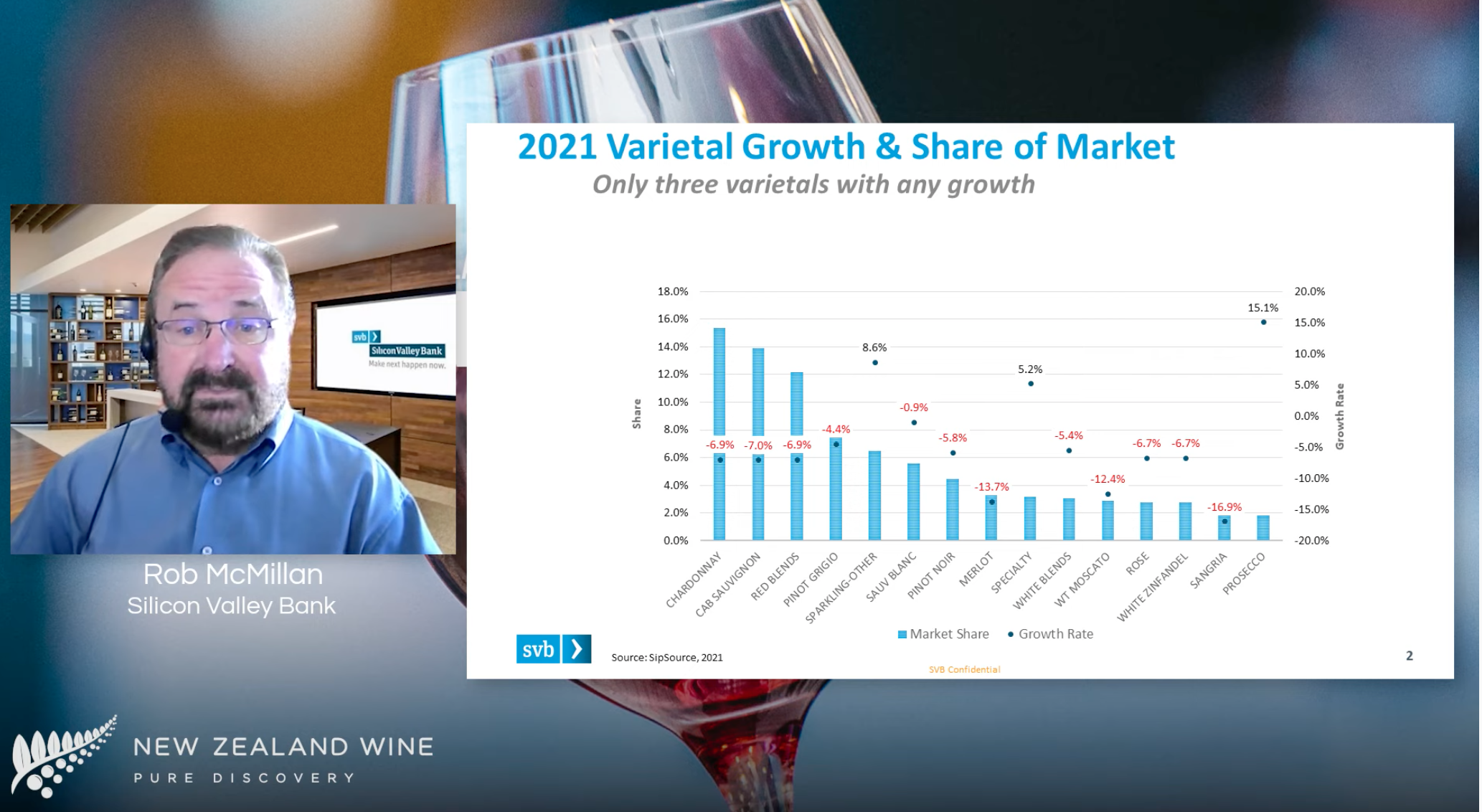 His big message, not just to New Zealand producers, but anyone looking to sell wine in the US is that the country now has two distinct wine markets. The premium industry, set at wines at $20 and above, and the high production, high volume industry that goes to the major grocers and big restaurant groups.

It is the latter segment that is really beginning to struggle, reflected in the 6% to 9% drop in volumes in the second half of 2021, going into 2022.

“There is a significant problem below $11, we are losing 10% in volume which is not good.”

But for New Zealand it throws up opportunities for its wine that is priced and focused more at the growing end of the $15 to $20 plus price categories.

“The consumer is looking for better wines, higher prices and New Zealand has always in the speed spot for premiumising consumers,” claims McMillan. “Brand New Zealand is very well thought of in the United States.”

But with this key caveat. What happens to your premium category in 10 years time? By then your 65 age group will be in their mid seventies and you will need to have a big number of younger consumers now coming into the New Zealand category over the next 10 years to make up that potential gap.

“In America we are losing our wine consumer,” he says in a nutshell. 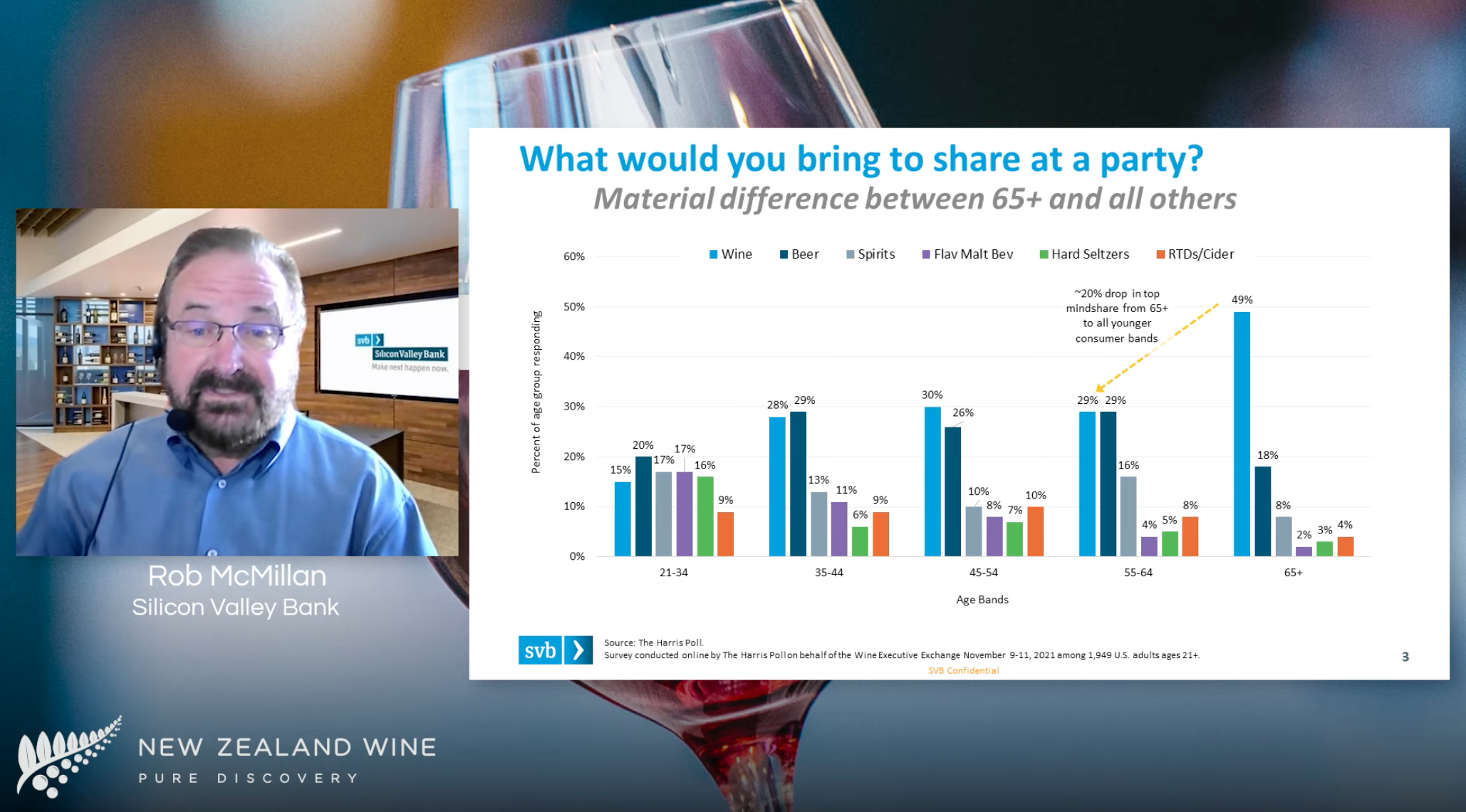 The big hope for New Zealand is that it is still seen to be up and coming and relatively new to the younger wine drinker. You’re not just following and drinking what your parents did, says McMillan.

The key is how far New Zealand can push its non Sauvignon varietals and start to make inroads into other areas such as Hawkes Bay Syrah and Central Otago Pinot Noir.

Crawford thinks New Zealand’s “clean, green” and youthful image also goes a long way in the US. She sees big potential in producers and New Zealand Winegrowers really pushing its sustainability credentials in the years ahead. “We are not very good at articulating just how good the sustainability system is,” she says. “There is great room for us to move into that conscious consumer also with New Zealand’s values.”

She adds: “There is whole new consumer opening up for us that is going to be incredibly valuable where New Zealand already has very strong foothold.”

But she concedes it is currently over reliant on Marlborough Sauvignon Blanc in the US and that it is not doing very well with other varietals there and “it is hard to get those listings”. “We have, though, an opportunity with our cool climate Chardonnay.”

Deller says he is particularly heartened by the premium opportunity in the US and the “less is better” trend which ties nicely to what New Zealand and Villa Maria is doing.

Whilst he accepts the need to attract younger drinkers he is also comforted by the fact wine still dominates the “dining occasion” and seen as the beverage that consumers turn to when they want to “relax and reward” themselves. Hence the big jump in Prosecco and sparkling wine sales.